At 38 years of age (born Feb 10, 1982). Justin Gatlin has a chance at crowning himself the oldest Olympic Champion in the 100 Meter Dash.  The accolade so far belongs to 1992 Olympic Champion Linford Christie of Great Britain who crowned himself Olympic Champion at age 32. If Gatlin manages to qualify through the US Trials leading up to the Olympics in Tokyo. And then comes off with the win. It will also mark a 17-year gap between golds probably the longest gap in any sport in Olympic History.

Gatlin however at 6 years older makes Christie look like a baby in comparison.  Gatlin has the Record for athletes over the age of 35 having clocked 9.87 seconds. The record in the age-grade up for 40 years and up belongs to Kim Collins of St. Kitts and Nevis with 9.93. There is a big jump in the 45 years category with Willie Gault 10.72 closer to 11 than 10.

Akane Simbini of South Africa has opened with a fast wind-aided 9.82 (+2.8) and 9.99 at the South African Championships. The Powerhouse Jamaicans are yet to make an impact on the 100m this year.

Who is Justin Gatlin?

Considered one of the modern era’s best sprinters, known for his blazing starts.

No, he is still active and aiming to make the US Team to the 2021 Tokyo Olympics.

How Old is Justin Gatlin?

Where is Justin Gatlin from?

He was born in Brooklyn, New York, United States.

He went to college on scholarship at the University of Tennessee.

Where does Justin Gatlin Train?

He is reportedly working with Brooks Johnson in Orlando, Florida. Before that, he was working with Dennis Mitchell.

Gatlin wins 2017 World Title Debunking the Myth that Bolt won with a community member posting a video-based off before they even crossed the finishing line. 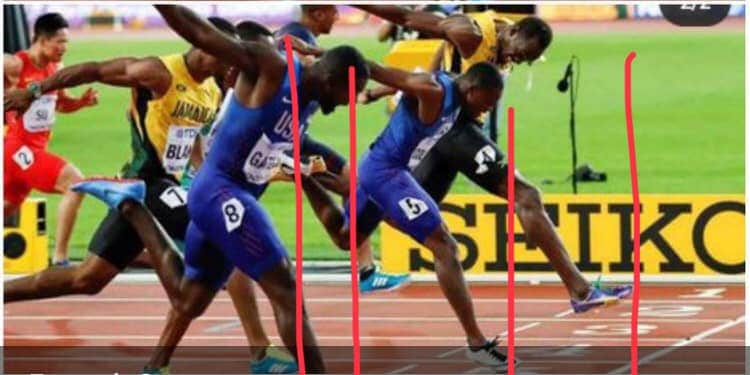 The 33-year-old American, whose last major win was the 2004 Olympic title in London, blasted away, destroying a quality field including former world record holder Asafa Powell (Jamaica) 9.92, and American record holder Tyson Gay (USA) 9.92. Gatlin who was in lane 4, wedged between Powell in 3 and Gay in 5.

He was out well with Powell for the first half of the race, with Gay lagging. Gatlin pulled away the second half to win comfortably. It was good to see three of the sport’s biggest names in the same race for once. The track is fast, with the meet record in Lausanne was set by Yohan Blake (Jamaica) in 2012 at 9.69.

Gatlin sends a message to Usain Bolt at the world champs, with an unbeaten streak this season and breaking several Bolt’s meet records in European meets. Bolt, who is nursing an injury, has withdrawn from his other European races saving himself for World Champs next month in Beijing, China, at the bird’s nest where he won his first Olympic titles in 2008.

The Question is will Bolt even turn up at the world champs?