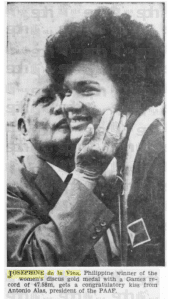 This is a revision of an article I wrote for Pinoymiler on March 8, 2012, titled ‘Filipino Junior Records in Chaos and Collision: The Philippines Greatest Female Thrower and the oldest JuniorRecord. More revisions as some info were incorrect.

This week we will look at the Philippines Women’s Discus record. I want to welcome all the story behind the country’s greatest ever female athlete in Track and Field as she is inducted into Pinoyathletics ‘Legends of Track and Field’. In 2018 while after I had finished with PSC Josephine De la Vina upon my nomination with the help of Miss. Rachael Dumuk was posthumously inducted into the Philippines Sports Commission Hall of Fame.

It is my view is that Ms Dela Vina is the greatest female track and field athlete the Philippines ever produced. And I hope my article will convince the reader of this as fact.

She was born in New Lucena, Iloilo, on April 20, 1946. The eldest child of American-Mexican Norman and Carolina de la Vina of Cebu.

Josephine de la Vina would set a legacy in Philippine Athletics that has not been matched. She got her earliest contact with sports by playing first base for the softball team of Labangon at Cebu Elementary school.

Becoming part of the CIT (Cebu Institute of Technology) where promising athletes were properly developed.

In the 50s and 60s, Cebu was a powerhouse centre for developing athletes under the guidance of Frictosa Soriano, who developed the strongest women’s team in the country, which also had developed Inocencia Solis.

Playing Softball in Elementary, it was towards high school and recognized her ability in the throws.

Josepine De la Vina ability at school meets where she excelled in throwing events caught the eye of Deans Amancio Alcordo and Vicente Tigas, who put her on a scholarship.‘As she became known due to her height, Big Jo grew to an intimidating 6’0, exceeding tall for a Filipina, especially in those days. 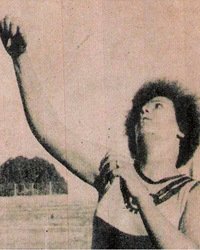 Jospehine De la Vina was the country’s greatest ever female thrower at the height of her powers in the 1960s and 1970s.

Judging by the age of some first sea game participants. Lydia was 15 and Elma 14 when they debuted for the Philippines in relays. It wouldn’t be out of the question to think De la Vina might have competed in the SEA Games in 1961 in Rangoon, then known as the SEA Peninsula Games.

(It has been noted that the Philippines was not a part of the SEA Peninsula Games, so Dela Vina did not participate in this meet)

The National Junior Record in Discus

While only 16 years of age, Josephine de la Vina competed at her first-ever Asian Track and Field Championships in Tokyo in 1962. She won the bronze in 37.79m which was then a Senior and national junior record. Yet it was two years later at the 1964 Tokyo Olympics de la Vina then aged 18 would throw 42.27m, further improving these marks.

She improved even further in the 1965 National Open in Manila; she threw even further a 48.38m, which for 52 years still is the Philippine National Junior Record.

Also, she returned, knowing she must do better at the next Asian Games in 1966 and was the country’s flag bearer. (Asian Games are held every four years). While Josephine De la Vina set a new Games record in the qualifying round of 47.40. She further improved the record in the final.

Josephine De la Vina throw of “156’1 1/2 inches” or 47.58m secured her the gold medal in the final. This was a new Asian Games record despite not being her best throw.

Josephine Dela Vina, a pretty 6-foot-tall civil engineering student, collected a gold medal for the Philippines in a game’s record throw (Strait Times). She cracked the record of 45.90m (150ft 7 1/4 inches) set by K. Murase of Japan at the last Asian Games.

A meeting of Asian Track and Field statisticians named her the ‘most confident athlete of the Asian Games (Strait Times).

Josephine Dela Vina also held the Women’s Shotput Record from 1970 to 1975 with a throw of 13.89m in Los Angeles.  This stood until it was broken by Consuela Salibis-Lacusong, who still holds the record today at 13.92m.

A very forgotten but important figure in the History of Filipino Track and Field. De La Vina peacefully passed away in 2011 in Jaro, Iloilo.

No newspaper article, remember who she was—a true champion of a bygone era.

*Current All-Time List of countries 10 Best Discus Throwers. and may revise the date if sufficient evidence is provided to update. (updated)

I want to thank Mr Benjamin Silva Netto of the PATAFA and Mr Hubbeling of the Asian Athletics Association.  Their help provides source material for the Revision of the Philippine National, Junior National, and UAAP Records.

Thanks to Mr Jad Adrian Washif for helping secure a copy of a rare book by the late Track and Field Historian Mr Anthony Buchannan on the advice of Mr Ignacio Dee.

It’s a sad thing that no newspapers or anybody picked up on this.

Besides Lydia De Vega, Josephine de la Vina was the only other Filipino Track and Field athlete to win gold in both the Asian Games and Asian Championships.

Josephine Dela Vina came from a bygone era before the Gintong Aloy days, which can be argued as the greatest period for the Filipino Track and Field athlete.