After 17 years of loyal service to the national team, his watch has now ended.

Joebert Delicano, although unable to secure that elusive SEA Games gold medal, continually provided a factory of meals at the SEA Games from 1999 to 2009 in the long and triple jump.

He currently holds the National Record in Men’s Triple Jump at 16.12m. He also served as the honorable longtime president of the training pool, succeeding Julius Nierras from 2009 until  2014, and was followed by Rene Herrera. A phenomenal junior who made the national team at 17 years of age.

Joebert Delicano still holds the Junior Records in the long jump (7.55m) and triple jump (15.53m), both set 15 years ago. Grover could have even medaled at the 1998 Asian Juniors had it not been for an injury in the Long Jump.

Joebert Delicano was also the token entry for the world champs in Seville. And ended up running the 100m when his luggage with all his jumping shoes got lost in Madrid.

As a newcomer from Bacolod, Joebert beat the country’s more established jumpers, Ernie Candelario, Raphie Pilaspilas, and Pacifico Tolentino at the National Games in Cebu in 1997; the youngster caught the eye of PATAFA. 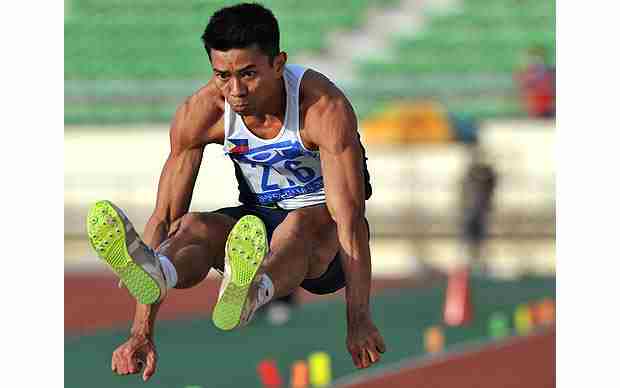 Joebert Delicano established himself as the country’s best jumper, often beating the upcoming Henry Dagmil. Paving the way and challenging Dagmil was what Grover brought to the sport. And in true sportsman, it was first to shake his rival Henry’s hand when Dagmil broke the 68-year-old Nino Ramirez record (1936). He handled his first defeat by a local in 7 years showing extreme dignity and composure.

This also saw the changing of the guard as Dagmil would overshadow Grover as the country’s best jumper. Most athletes in the situation of defeat may have quit at this stage. However, Grover would play second fiddle to Dagmil. But he would have a surprise win over Dagmil at the 2009 SEA Games, finally improving his best leap to 7.74m.

A good friend to all who live the spirit of the team. Grover, who is currently an assistant coach at FEU, will continue contributing to the sport he loves. But will now pass the torch onto the next generation.

Joebert Delicano is currently helping National jumps medalist Janry Ubas and National Junior High Jumper Keith Quilo at FEU to achieve their goals. Grover is a Level 1 IAAwhoh, having attended a unique ar in Korea to further his skills and a Level 2 PATAFA coach.