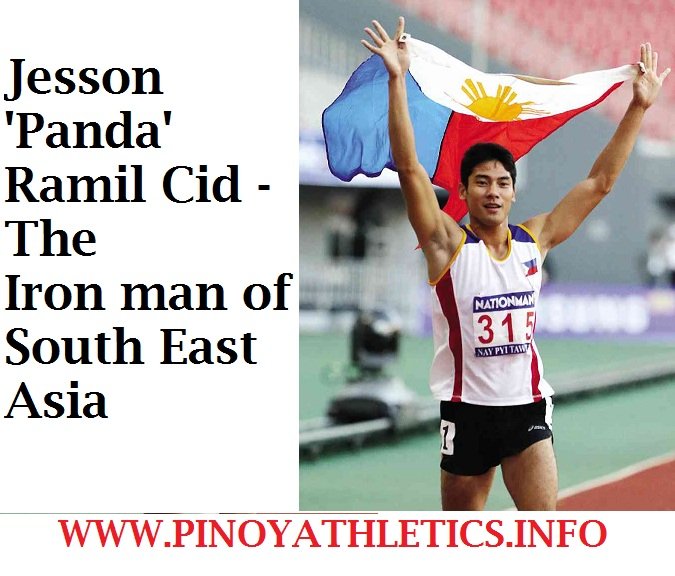 Our the newest inductee to the Legends of Track and Field is Jesson Ramil Cid. The 2013 SEA Games Gold Medalist and previous national record holder in the Decathlon. Cid was nominated for the PSC Sports Hall of Fame but unfortunately, his performances were too recent to be included.

MANILA, Philippines – Jesson Ramil Cid (born 1991) looks back at the soil field in Dingras, Ilocos Norte where he first tried the high jump. Unlike in the UAAP or other major tournaments, you can only do the scissors jump here since there is no foam to land on. It all began here 7 years ago for the man now recognized as Southeast Asia’s best all-around athlete.

Discovered while playing basketball at age 13, Cid was persuaded by coaches from Dingras to try the high jump so he could represent the Ilocos region in the annual Palarong Pambansa. It was not all roses as he only placed 3rd in the 2007 Palaro as a high school junior. Even worse, he did not even get a medal during his senior year.

Despite his Palaro shortcomings, he was spotted by the Michael Keon, former director of Gintong Alay, which produced the likes of Lydia De Vega and Isidro Del Prado. Keon immediately recommended Cid to former Gintong Alay national coach and FEU mentor Rosito Andaya.

Cid immediately became known in the UAAP circles as the iron man of athletics. He competed in so many events that the UAAP even changed its rules to limit the number of events an athlete could join. His potential was breathtaking and Andaya felt he could be the next best FEU athlete since De Vega.


One of the rising stars the past few years in the Decathlon has been one of Run for Change’s priority athletes:  Jesson  Cid and also a member of the FEU Track and Field Team.

Most noteworthy is that the 21-year old from Ilocos has shown tremendous improvement this year over the 400m. While Cid Improved his best time to 48.44 and ranked third this year on the Ranking Lists, Hence putting in contention for the Men’s 4x400m Relay team at this stage. While the fourth fastest team member is currently 48.51.

The Decathlon is the original event of Jesson Ramil Cid, he holds the Philippine Junior Record at 6094 set at the 2010 National Open. Cid also holds the UAAP Record at 6137 set at the 2011 UAAP. His best score is 6287 from the 2011 PNG. The hard-working Cid during his first two UAAP actually participated in the Decathlon and at least seven other events.

As the Decathlon is only worth a certain amount of points, yet is a grueling ten events. While Cid’s college coaches decided they could utilize him better by putting him in more individual events and leaving out the decathlon. Hence in 2012, he took a break, if that’s what you want to call it from the Decathlon. Also during this type of tapering off period, he actually improved his 200m and 400m times. Cid Initially a hurdler has had more success in the sprints this year.

Looking at Cid’s Best Individual Scores How Close is he to qualifying for the SEA Games?

It is important to note that Cid has improved after taking a year off Decathlon. While if he was to equal his best performances. Furthermore then how close to the SEA Games standard would he be?  While for hand timed performances I have added +.24 seconds for 100-400 distances and .14 for distance where necessary. Also, I  have used the Standard IAAF Decathlon point scoring system chart for multi-events. While this is different for individual events.

= 6669 points total which would be above the bronze medal standard of 6602 for SEA Games.

Cid took the Gold Medal in the 2013 SEA Games with 7038 points. Breaking the record of Fidel ‘Toto’ Gallenero the 2001 SEA Games Gold Medalist who had held the record with 6974 points.

SEA Games Champion 23-year-old Decathlete Jesson Cid will be participating at the Malaysian National Open on June 25-27. Consequently, Cid broke the national record of 2001 SEA Games Champion Fidel ‘Toto’ Gallenero (now a Brunei coach) (6963 pts) with 7038 pts at the SEA Games. While he improved on his own record with 7069 pts at the National Games last month.

Meanwhile, in Italy National Indoor and Junior Record Holder Ernest John Obiena will have a few attempts before the deadline of entries close on July 7 to qualify for Boys Pole Vault at the World Junior Champs which will be held at Oregon near the end of the month. Ernest is in Italy with his father National Coach Emerson Obiena in a 3-month training stint under coach Vitaly the former coach of Sergey Bubka.

Jesson Ramil Cid: From FEU to the Southeast Asian Games Cid competes in so many events that the UAAP even changed its rules to limit the number of events an athlete could join

Jesson Ramil did enough to add the Malaysian Decathlon Open Championship title to his extensive resume. Hence Cid the SEA Games champion and Philippine Record Holder with 7069 pts. Done at the recently concluded PNG last month bet all the Malaysian athletes to score

After the 8th event of 10 in the Decathlon where our lone decathlete and lone entry Mr. Cid Jesson Ramil taking part here at Perlis, Malaysia. While Jesson manage to take a lead from the start of the first event yesterday until this morning with a big margin of around 500 points.

The last 2 events has been so tough for our athlete Cid Jesson Ramil having knee pain, it is a heart attacking action in javelin where he got fouled in the first 2 throw but still manage to set a good mark on his last throw with a distance of 40+ meters,

SEA Games Decathlon Champion and Philippine Record Holder Jesson Cid, 23 has joined the Adopt an Olympian program of Jim Lafferty. The Former UAAP standout and his Coach Sean Guevarra (who still holds the National Record for High Jump) answered several questions the media fired at them at the Club Filipino Function room in San Juan.

For the next two months, Jesson Cid’s target is to improve his upper body strength so he could better his personal record of 7,069 to the 7,300-7,500 range.  Jesson Cid will participate at the Incheon Asian Games from September 19 to October 4. While he is currently up with the top five Decathletes in Asia.

While Cid would be funded by Wong Chu King Foundation. And around 160,000 pesos a month would be invested into him leading up to the 2016 Rio Olympics.

Backing from the private sector

“The PSC [Philippine Sports Commission] and Patafa are doing great in supporting the athletes but they can’t rely much more on the tax money. That’s why we need the help of private sectors to finance our elite athletes,” said Lafferty.

So far three Olympians have agreed to follow the program with Olympian Long Jumper Marestella Torres her husband Shot putter Eleazer Sunang and now Cid being the third to accept the offer.

It’s all about attitude

“There are three steps to success in life: determine what you want, determine the price and you have to pay the price. It’s incredibly simple. The problem is not many people are willing to do those steps. They don’t know what they want and they don’t want to pay the price,” Jim Lafferty said during a press conference of Adopt an Olympian program at the Club Filipino in Greenhills, San Juan City on Tuesday.

Many candidates have been considered for the Adopt an Olympian program. While not all the candidates were willing to comply with the strict requirements it entails. PATAFA indicated that 13 athletes in the current PATAFA pool have been shortlisted. While he was not willing to disclose names at this point in time as they are still being evaluated.

“The sobering news is we have some works in progress. We need to make sure the athletes are passing the standards. We have some athletes that have said, ‘I am not prepared to give up all of those foods to do this.’ And we tell them ‘Okay, then we’re not going to bring you into the project,’” he said.

“It’s really an opportunity as a young athlete to get support like this for the Rio Olympics. Sa akin po, inisip ko na magandang pagkakataon ito, so grab ko na po,” remarked Cid during a press conference yesterday at the Club Filipino in Greenhills.

Among the changes an athlete has to agree to is a very strict diet where rice and bread will be eliminated. While highly regimented training guidelines and constant observation and measurements. And even their sleeping patterns will be monitored. Also, the athletes must be willing to relocate from their existing quarters. And to residences nearer to their coaches to facilitate training. And remove all possible distractions while training full-time for six days a week.

Tinkering here and there

Coach Sean Guevara explained at the National Open. Cid could have actually got around 7250 points at the National Games if he had done better in the discus. What Mr. Lafferty said made a lot of sense.

While Cid is competitive in the running events, his weaknesses are the lower body events Discus, Shot put, Javelin, and Pole Vault. Hence it is the goal of Mr. Lafferty and his team to increase his upper body strength through diet. And rigid training so he can score around 7400 points and challenge for a medal at the Asian Games.

Mr. Lafferty, who has Fil-New Zealand Oxford College, educated Nutritionist Harvey De Baron assisting with this project has put Cid on a diet of Kimoah. An African imported Grain which will substitute Rice as Cid’s staple. While Cid bench press is at 85kg. And Lafferty is aiming to get him to 100kg bench which would see dramatic increases in his throwing ability.

Jesson Cid’s last major medal was the 2015 SEA Games in Singapore. By this stage, he was unable to defend his title against the Vietnamese athlete Nguyen Van Hue who tallied 7232 points. Cid let in a valiant effort with 7065 points, just 4 points off his then-national record. And Janry Ubas another FEU alumni took the bronze in the Decathlon in 6796 points.

Cid had ongoing knee problems that required surgery and was never fully able to recover. He was removed from the national team by around 2017 and this ended his athletic career. He did, however, carry on in some capacity in 2017 as the training partner to Aries Toledo who also hailed from the northern part of the country and was able to break Cid’s SEA Games record and win the gold back for the Philippines at the 2017 SEA Games.