The performance came on the back of Slade’s 10.02 and 10.04 wind aided best performances and 1-1 in his dual with Erriyon Knighton another top high schooler.

The time was the 6th fastest in the world and the best time in the World by a Junior Athlete in 2021. Quicker than the 20.21 registered by Erriyon Knighton on April 4.

Teenager Slade’s his way ahead of Veteran Bromell

Jaylen Slade representing IMG Academy continued his undefeated streak in the 200 meters this year. And his surprise recent win was running down Trayvon Bromell the 2015 Bronze medalist in the 100 Meters. This was the Florida International at Ansin Sports Complex, in Miramar Florida.

25-year-old Bromell was out fastest but the speedy teenager Slade was right with him. With 50 Meters to go Slade got up on the shoulder of Bromell and put the pressure on him right until the line lunging to take the narrow win 20.27 to 20.29.

The wind reading above the allowable limit registering at +2.5 m/s.

Slade had already has set the US Indoor record at 200m with 20.62 earlier this year.

Jaylen Slade is running of the rising Stars of USA Track and Field. Having clocked the fastest indoor 200m ever by a High schooler.

The 17-year-old timed 20.62 at the American Track League in Fayetteville on Feb 22. Breaking the previous record held by none other than Noah Lyles, which was 20.63 set in 2016 also in Fayetteville. Jaylen Slade is born in 2004.

How fast can Jaylen Slade Go?

Running on an indoor track, often of 200 m lap length, is generally slower than an outdoor track, likely of 400 m distance. … The reasons are rather simple: there are more and tighter turns on a 200m track, and momentum is lost outwards to a certain extent when rounding the sharper corners.

While Jaylen Slade is the only high schooler to go under 21 seconds twice indoors, he also ran a 20.97 at the Eastern Conference a few weeks prior. Another American, Erriyon Knighton (born 2004), last year ran 20.33 and 20.89 outdoors. 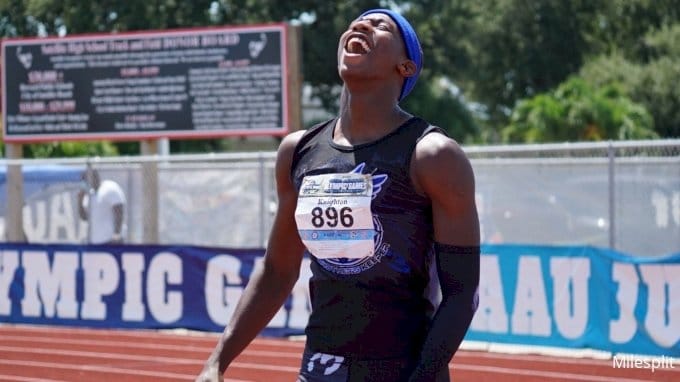 This brings me to the question of how well he would fare at the World Junior Athletics Championships in Nairobi, Kenya, held from 17 August to 22.

Firstly the World Junior Qualifier is 21.38. Jaylen Slade and about 20 other Junior Americans have all ran under the 21.38. However, runner space announced that the scheduled USA Junior National Championships in July had been canceled.

Furthermore, we will select Team USA positions for the 2021 Pan Am Championships (July 23-25 in Iquique, Chile) based on performance rank order for Friday, January 1, 2021, through Sunday, June 13, 2021.  Additional details on these selection procedures will be announced at a later date.

Does this mean the top 2 200m Junior Men will go to World Juniors and the 3rd and 4th to Pan Am’s due ot the fact the meets are now just 2-3 weeks apart?

Who Else is at World Juniors?

Apart from Knighton, who will be another strong contender from the USA. Other athletes Jaylen Slade could face at world Juniors include.

*I had to rewrite this article as my WordPress Database crashed