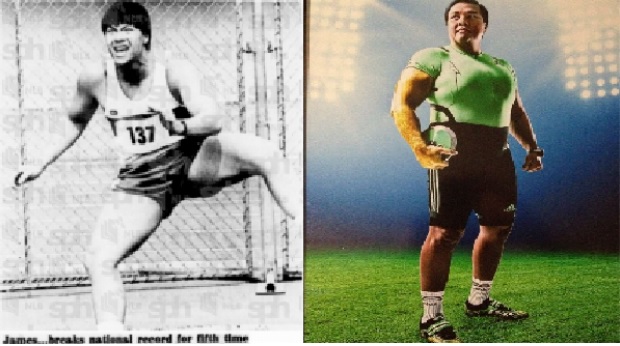 He holds the honor of being the most bemedalled athlete in South East Asia fora single event (discus). With 10 SEA Games Gold Medals spanning two decades from 1993-2011.

He also currently holds the SEA Games Discus Record. He is formally the Chairman of the Athletes Commission under the Singapore National Olympic Committee. Of which he is also an Executive Committee member. Also former General Manger of Singapore Athletics.

He played 6 other sports during his primary and secondary school days, before discovering his prowess in track and field, almost by accident! And that turning point at the age of 16 allowed him to make his international debut at the 1985 Merdeka Games. From then till 1993, it took James 3 SEA Games campaigns, before finally securing the Discus Gold medal when Singapore hosted the biennial event.

Make that 10 for King James 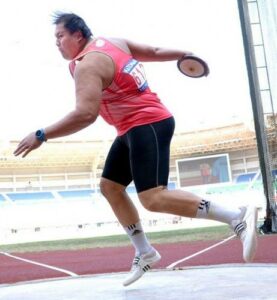 It was the start of another landmark streak (for the Republic) that would see “The Friendly Giant” dominate the regional Games with a haul of 16 medals, 10 of which were Gold. And in 2013 almost at the age of 45, he bade farewell to track and field, after an illustrious international run of almost 30 years.

He reigned supreme in the cage over two decades of discus at the Southeast Asian Games.

But the sporting giant that is Singapore’s James Wong was finally toppled from his perch on Sunday morning at the Wunna Theikdi stadium in Naypyidaw, Myanmar.

Wong threw a distance of 50.82m to finish fifth – his worst position in 26 years of competing at the Games. This was also the first time since 1993 that the 44-year-old walked away without a gold medal in hand.

Although not a Filipino athlete, Pinoyathletics.com is proud to call James Wong of Singapore a friend.

James will be conducting the ‘Circle of Champions’, a 2-day throws clinic with lecture on strength and conditioning organized by Run for Change at the end of January in Manila with Pinoyathletics.com as an event partner.

For this activity, we have invited Mr. James Wong Tuck Yim to the Philippines to lead the 2013 throwers clinic and be the lead speaker for the symposium. James is currently the General Manager and Chief of Sports Development and Performance of the Singapore Athletics Association

James, aside from being the General Manager of the Singapore Athletics Association and Chief Sports Development and Performance,  is undoubtedly the greatest male athlete in SEA Games athletics history.

He has won a total of 10 SEA Games Gold Medals, nine in the Discus from 1993-2005 and 2009-2011. In 1997 James also decided to win the Gold for Hammer Throw as well. This makes James have the most number of medals for a male athlete (10) at the SEA Games and equal the most number of medals in a single event with Burma’s Jennifer Tin Lay who has nine consecutive titles in Women’s Shot-put between 1965 and 1983.

Our very own Elma Muros of the Philippines is tied with Lay for the most number of Gold’s in all individual events with fifteen (Lay won a further six titles in the discus), (Elma has eight in the Long Jump). Elma is probably the most bemedalled athlete at SEA Games if you include the Relays.

Wong at 44 years of age is in an event (discus) were athletes can continue improving into their 40s as strength levels is something that continually increases later on as opposed to speed which usually starts dropping off in the 30s.

If James can take out the SEA Games Discus title one last time in 2013 he will reach the magic number ten. He is already the most bemedalled Singaporean Track and Field Athlete in the nation’s history.

James currently holds the SEA Games record in the discus. As an honor for his many years of service James was selected to carry the Singapore flag at both the 2003 & 2011 SEA Games for Team Singapore.

The 6’3 Wong also played soccer and Basketball up until 2000.

Mr. Wong went to College in the United States at Mount San Antonio College in Walnut California from 1990 to 1993, with a degree of Associate in Arts and from 1993 to 1995 he attended Angelo State University in San Angelo, Texas, for his Bachelor of Science degree, majoring in Kinesiology and minor in Management.  Both of these two fields would help him off later in life as a self coached athlete and administrator in Singapore Athletics.

As well as accomplished coach and active sea games champion, he is also the General Manager of the Singapore Athletics Association. In June 2010 Singapore athletics had a new group come in who were to reform the Singaporean Athletic Association.

Mr. Wong who was initially Honorary Secretary, and later their Chief High Performance in the new team, and then promoted to General Manager.

Mr. Wong is also a highly experienced coach. He has coached Ms Wan Lay Chi who won the silver medal for shot-put women in the 2011 sea games where Singapore won both gold and silver.

Besides all his above credential, James also won the Singapore Sports Man Of the year award in 2004 and also the highest youth accolade in 2003-4 for the nation Singapore Youth Award as well.

James is also the current Chairman of the Singapore National Olympic Council Athletes Commission for the past 4 years (2009 till Current) and he was before their vice chairman as well from 2005-2008.

James is also an avid grassroots leader and he is the Chairman of the Teck Ghee Community Sports Club which he volunteered his time for the past decade.