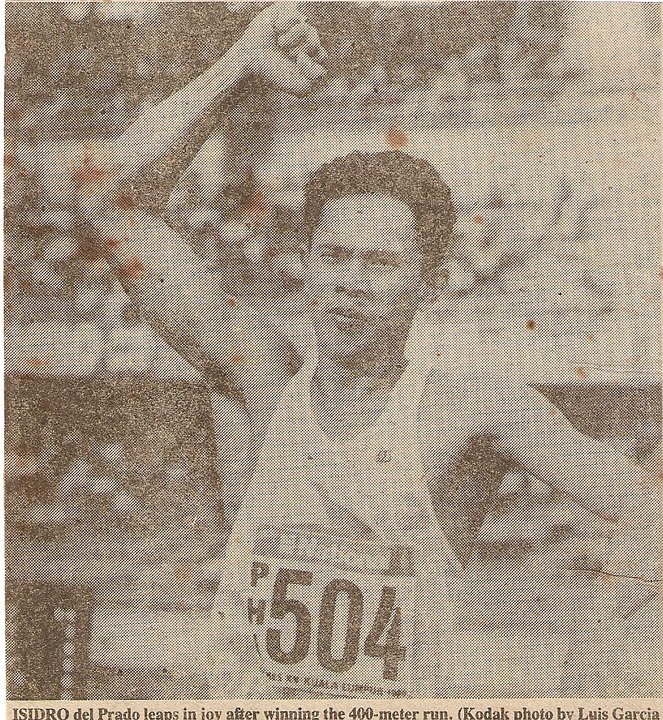 In the early 80s, a young man emerged who would take the Men’s 400m dash further than any Filipino that came before him.

Also, he set a new benchmark in this event until today; his performance of 45.57 remains the Filipino National Record.

28 years later and still a respectable time at the international level.

Especially relevant, though, was, in turn, he created a legacy guiding and inspiring the next generation of athletes.

Hence to SEA Games championships in his pet event.

Finding those who were brave enough to endure the grueling quarter mile.

Del Prado was originally trained under the duo of Magno Santos Jr. and Arsenio Jazmin.

By far the fastest competitor in the race with ASEAN Record standing at 1:57.3. 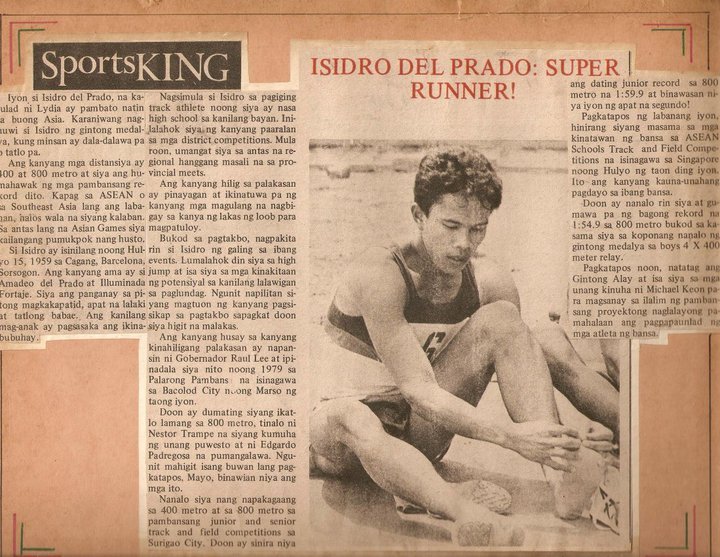 ‘Del’ to family, friends, and athletes, Del Prado is best remembered for becoming one of the two most successful athletes the country has produced under Project: Gintong Alay during martial law.

Yet this project was based largely on the multi-million dollar venture of the Australian Sports system.

The other one was former Asian sprint queen Lydia de Vega, who became the project’s face, a training program copied and envied by several Southeast Asian countries in the 80s. 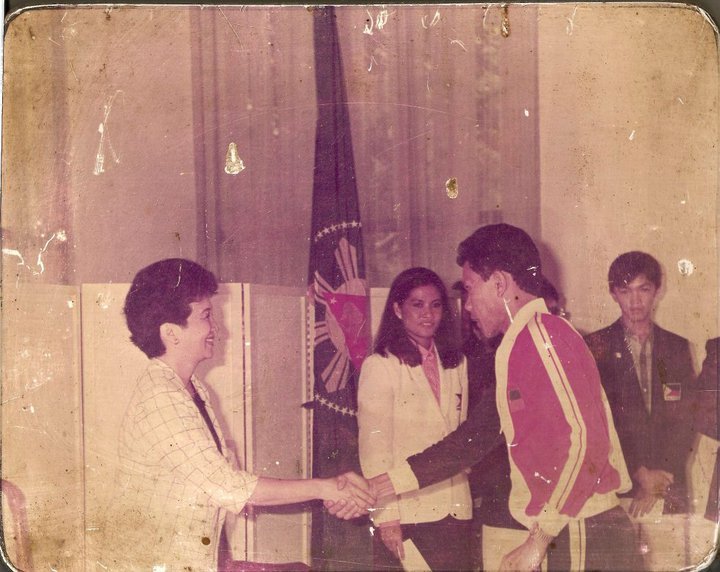 “It was a good program. It produced results,” said Del Prado in regards to the Gintong Alay.

Del Prado now advised focussing as well on the 400m won the unique double. Reminiscent of Cuban Alberto Juantorena’s 1976 Olympic double victory at the 800-meter run in 1:48.79 in 1981. Yet it would be exactly 20 years till another Filipino would win the Men’s 800m a the SEA Games.

Del Prado made the 400m Finals at the 1981 Asian Championships in Tokyo with 47.43 in semi’s, but he was disqualified. Along with Marlon Pagaliluan, Honesto Larce, and Renato Unso, they took a distant 4th place in the 4x400m Relay. 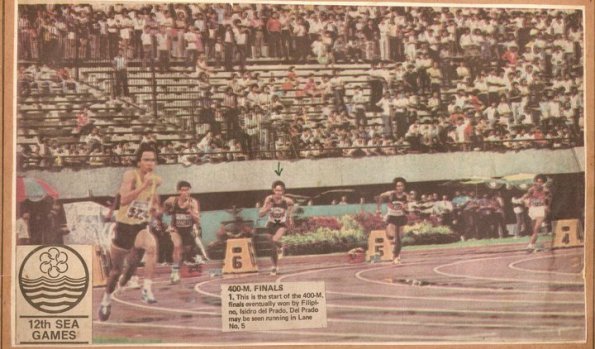 Also, he set the 400m in a New SEA Games Record in 47.10. Very narrowly holding off defending SEA Games Champion  Rabuan Pit of Malaysia. Who is a blanket finish who clocked in at 47.15? Simultaneously, Del Prado would defeat Pit again at the ASEAN Cup in Kuala Lumpur in November of 1982, 47.1 to 47.3.

The following year, his travels took him to Australia in March due to his Gintong Alay boss Michael Marcos Keon connection. He placed second in the 400m at the Australian National Championships in 46.38. 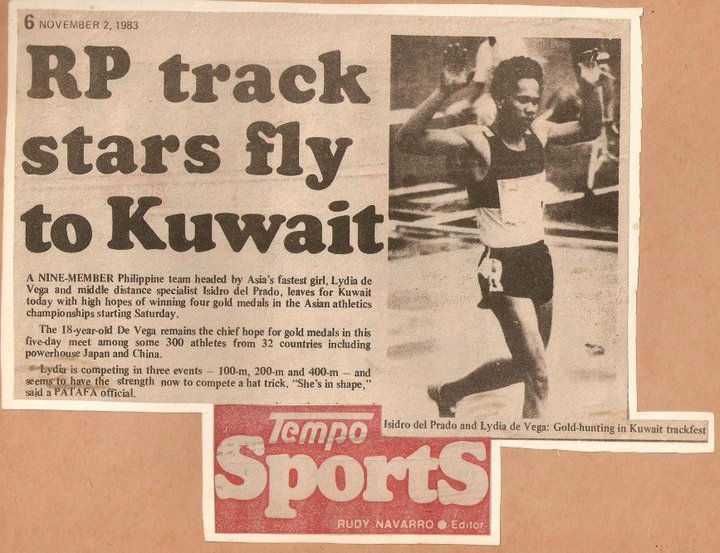 Del Prado would defend his SEA Games title in 1983 with a time of 46.40. Also, he would capture his first Asian title that year in Kuwait. With 46.24 holdings off Aouf Abdulrahman Yousef of Iraq (46.74), the bronze medalist from the previous Asian Championships, and upcoming (46.76) Mohammed Abdin Jadi of Malaysia, who would later deprive Del Prado of his SEA Games titles.

Del Prado ran at the inaugural World Championships in Helsinki but did not advance, placing fourth in his heat in 46.92.

Also, Del Prado ran at the 1984 Olympic Games, placing third in his heat in 46.82, which was good enough to qualify for the quarter-final in which he finished last in 46.71. 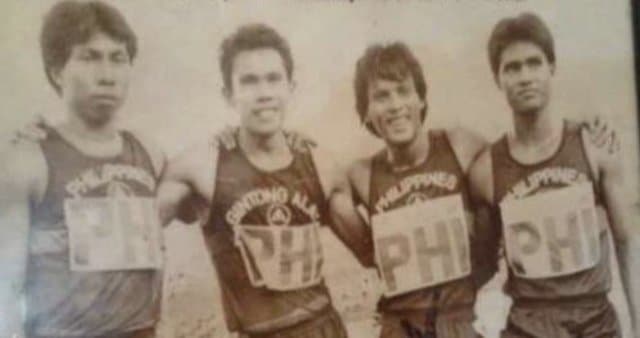 The Famous Victories of the Bicol Express in 1985 in the Men’s 4×400 in a record of 3:06.58 at the Bangkok SEA Games in 1985 remains untouched to this day. Then Del Prado teamed up with Romeo Gido, Honesto Larce, and Marlon Pagaliluan. Hence it would be 20 years before the Philippines would recapture the SEA Games title in this event.

While Del Prado lost his SEA Games title, pulling up in the heat in 49.01. And not contesting the final but was able to run the 4×400 two days later.

While Del Prado never won a gold at the Asian Games, he did capture Golds at Asian Track and Field. He clocked 45.96 in the 1986 Asian Games to place second to defending champion Susumu Takano of Japan, who defended his title he had won in 1982.

SEA Games Champion one last time and moving on

Isidro was coached by the Australian Anthony ‘Tony’ Benson during the Gintong Alay era. Who started this about his former ward on his website.

Isidro was one of the most talented athletes I ever had the privilege of coaching. With a 45.6/400m pb and great natural endurance he was a potential sub 1:40 minute 800m runner. Moving forward I’m very proud he became the Philippines Head Coach. 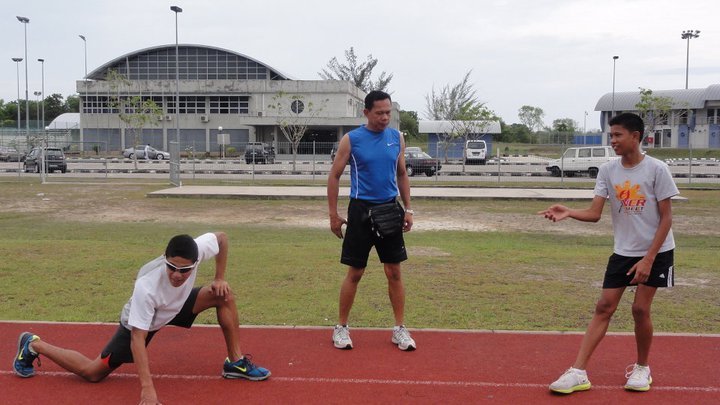 Both Del Prado’s sons Isidro Del Prado Jr. (2013, SEA Games Gold 4×400) and Michael Carlo Del Prado (2017 & 2019, SEA Games Bronze 4×400) became SEA Games medalists in their own right, but neither could get near the performance of their father in the individual event.

The progress of 400m National Record