History of Adidas Pitch Invasion: Adidas Puma and the Making of Modern Sport

On a cold but sunny day last month, a stream of nervous-looking players, male and female, ran on to a football pitch in the southern Germantown of Herzogenaurach. The match was an attempt to heal the wounds of a bitter family argument that has split the town for 60 years – and fuelled the fortunes of two of the world’s most powerful sporting brands. This is Adidas Origin.

Two globals were founded 60 years ago. After successful shoemaker brothers, Adi and Rudi Dassler fell out bitterly. They disbanded their 25-year-old company, the Gebrüder Dassler Schuhfabrik, which had made shoes for legendary athlete Jesse Owens among others, and formed rival manufacturers on opposite sides of the river Aurach, which runs through the center of Herzogenaurach. And here the headquarters of these two giants remain today, barely a couple of miles apart.

What started the spat between the brothers is a point of contention. Town chronicles mention it only in passing as “internal family difficulties”. But the most common explanation is that Rudi (apparently the better-looking one). Had an affair with Adi’s wife, Käthe, for which he was never forgiven.

But many other accusations fly, over who was the more enthusiastic Nazi (both joined the party in 1933), or who really invented the screw-in soccer boot studs that helped Germany‘s national team secure its World Cup final victory over Hungary on a soaking pitch in Berne in 1954. Many also point to a night in 1943 when Herzogenaurach was under allied bombardment. Adi and his wife apparently clambered into an air-raid shelter to hear Rudi, who was already there with his wife and family, declare: “The Schweinhunde (pig dogs) is back.” Adi insisted he had meant the RAF, but Rudi refused to believe him.

“There was a time when you’d have risked the wrath of colleagues and family if, as an employee of one company, you married the employee of the other,” says Klaus-Peter Gäbelein of the local Heritage Association. “Even religion and politics were part of the heady mix. Puma was seen as Catholic and politically conservative, Adidas as Protestant and Social Democratic.”

In business terms, it is Adi who has won. Adidas is by far the bigger company, employing 39,000 compared with Puma’s 9,000. But it is the nature of the Adi- and Rudi-driven rivalry that has given both firms their fighting spirit, trying to outdo each other by securing endorsements with the world’s top sportsmen and women.

The Dassler brothers were building on Herzogenaurach’s manufacturing traditions. Which started in the middle-ages when it produced textiles and, later, shoes and carpet-slippers.

When they began their joint enterprise on returning from the first world war. Their father Christoph, a shoemaker, passed on the tips of the trade. And so it was that Adi gathered the tools and equipment left by retreating first world war soldiers and “shaped their first shoe, a cross between a carpet slipper and a running shoe”.

Neither company is now controlled by descendants of their founders. The brothers are long since dead, and Puma is majority-owned by the French luxury goods maker PPR, while Adidas is owned by lots of small shareholders. Nevertheless, the companies still keep their headquarters in Herzogenaurach.

Manufacturing may have long since moved to distant corners of the world. But the factory workers have been replaced by young, sporty employees from many nations who concentrate on design, marketing, and brand awareness and communicate in English. This town of cobbled streets and half-timbered houses still matters to both companies. It’s almost as if moving away to nearby Nuremberg or Erlangen would be admitting defeat.

The wonderfully named mayor, German Hacker, tells me that, even when it came to the recent football match. It would not have done any good for the town’s morale to have one “firm” beat the other. “This match was diplomatic down to the last blade of grass.” Even the ball was co-branded. It is somewhat disappointing to find out it was a “management versus workers” game. Which the bosses won 7-5.

What the town is crying out for, but will probably never get, is a shoe museum. “The companies would never be able to decide on a common story,” smiles Gäbelein. Instead, visitors are left to their own devices. In the stillness of the town’s cemetery. Few of those tending the graves are even aware that both brothers are buried here. But after some time I find them, Adi’s granite gravestone nestled in a bed of purple pansies and, at the opposite end of the cemetery, Rudi’s final resting place, marked by an Angel carved in stone next to a fir tree.

And yet before they died the brothers may, in fact, have been reconciled According to several people I meet. Some of whom only dare speak about it in whispered tones. 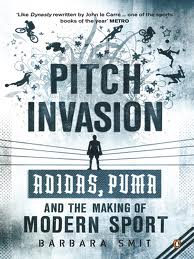