This is the first Olympic gold medal that the Philippines ever won! And in the process set a new Olympic record in the clean and jerk and total lift.</span></div>
We will finally hear the Philippine National Anthem in the Olympics!</span></div></div>
</div>

Diaz finished fourth overall with 212 points; a point is shy of bronze medalist Muattar Nabieva of Uzbekistan. World record holder Liao Qiuyun of China took home the gold with 222 points while her compatriot Li Yajun bagged the silver with 221 points.</span></p>

In her second snatch attempt, Diaz hurdled the 90kg lift and comfortably cleared the 94kg in her third attempt.</span></p>

In her first clean and jerk attempt, the 30-year-old Filipina weightlifter successfully lifted 118kg but failed to clear the 121, and 122 kg lifts in her succeeding tries.</span></p>

“Even though this was just a tune up tournament, I still really wanted to give my best,” Diaz said. “But I did something wrong. I know I can beat them.”</span></em></span></p></blockquote>

And while the focus was on Diaz, another Diaz of the same bloodline started to make a name for herself.</span></p>

Diaz and her strength and conditioning coach Julius Naranjo and Chinese Coach Kaiwen Gao will fly back to Malacca in Malaysia on Saturday to resume their training camp.</span></p>

Sisters Rose Jean and Rosegie Ramos were like a small-town version of a band groupie that literally followed Hidilyn Diaz while training back home in Zamboanga City.</span></p>

Over the weekend, right at the Olympic silver medalist’s own gym and with neighbors watching, they claimed the spotlight for themselves and are on track to doing what Hidilyn Diaz did for her own family.</span></p></div></div> 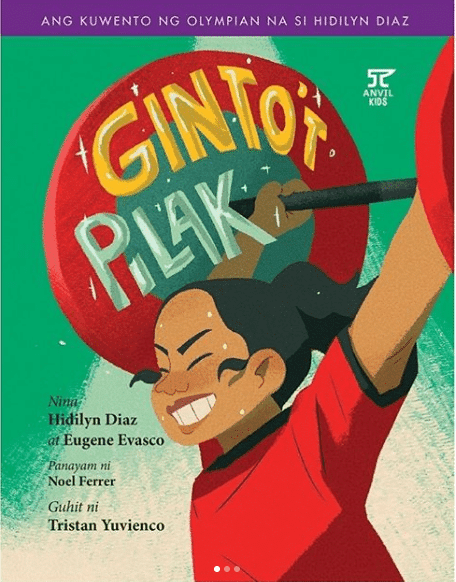 I am so excited to announce the launch of a children’s book that I am featured in!</span></p>

This is one of my WHY’s in life; before I won the silver medal for the Philippines at the 2016 Rio Olympics, I didn’t give up on my preparation for the Olympics because of the younger generation. </span></p>

I wanted to build a Weightlifting gym for them; I built it, but I want to inspire them to continue their weightlifting dream. </span></p>

I came from nothing to eventually become a silver medalist. We never know; one of these kids might be the next Gold Medalist.</span></p> 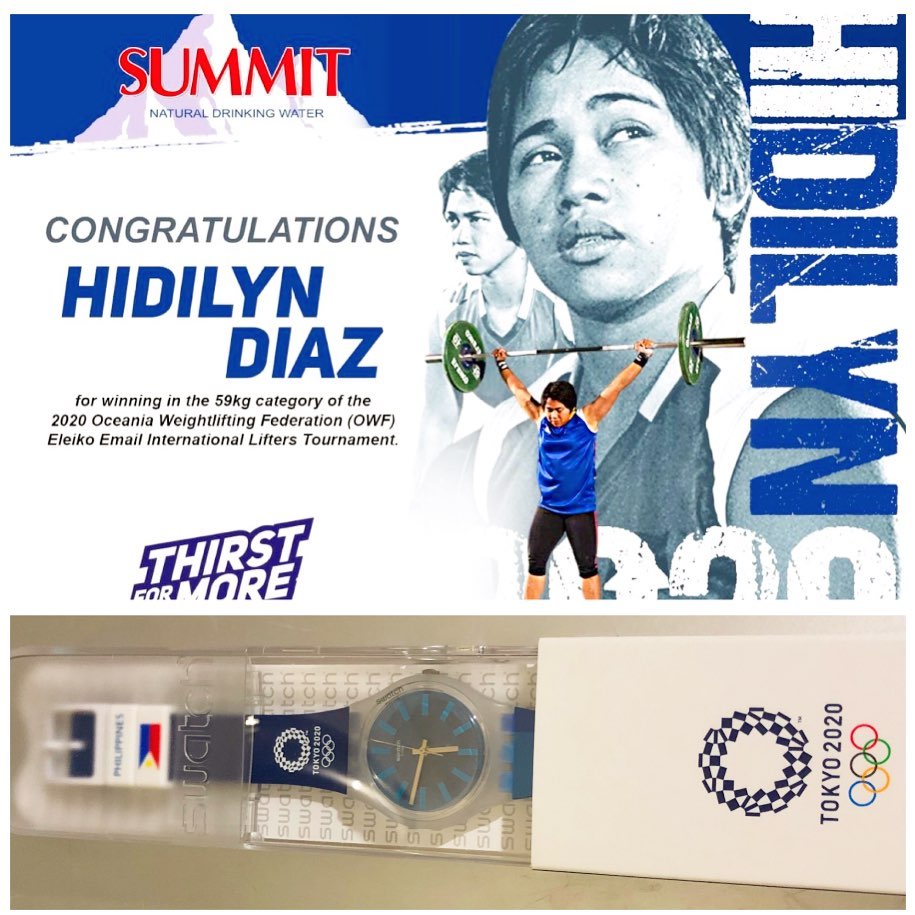 Spending the lockdown in Kuala Lumpur, Malaysia, where she was supposed to hold her training camp for the now-postponed Olympic weight lighting qualifiers, Hidilyn Diaz lifted 216 kgs to capture the gold medal in the women’s 59 kg. Category, which had 51 participants.</span></p>

Sharp as ever, Hidilyn Diaz beat Australia’s Fatima Yakabu and South Africa’s Johanni Taljaard, who posted 189 and 188 kgs. to settle for silver and bronze, respectively.</span></p>

Hidilyn Diaz thinks online competitions have helped her stay focused on her goals, including giving the Philippines its first-ever Olympic gold medal.</span></p>

“I’m grateful that I competed in this event, I was able to prepare and set my mind to it,” said Hidilyn Diaz, who also won the 30th Southeast Asian Games gold last year.</em></span></p></blockquote>

The online competition organized by the Oceania Weightlifting Federation to mark the original July 24 opening date of the Tokyo Games has attracted 751 entries from 63 countries.</span></p> 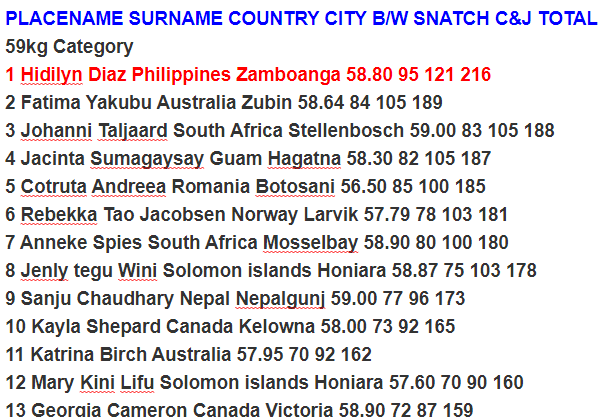 Above all, the performance highlighted Day 1 of the championships. Above all, ‘The Roma World Cup’ serves as the highest senior world championship this year. And it is an Olympic qualifying meet. </span></p>

Ukraine’s Kamila Konotop came in 2nd with 196kg, and Tunisia’s Nouha Landoulsi bagged the overall bronze with a total lift of 194kg.</span></p>

In conclusion, the win virtually sealed the Filipina’s return stint to the quadrennial meet. Slated to run from July 24 to August 9 in Tokyo, Japan.</span></div> 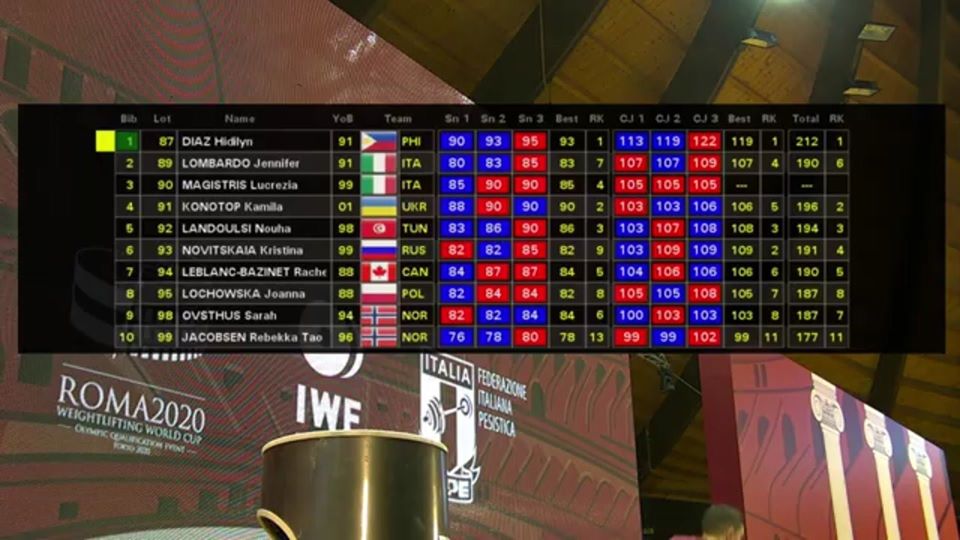 Also, John Ceniza took a surprise Bronze at the World Cup. The Cebuano rallied to finish on the medal podium. Therefore lifting 152 kilograms on his final attempt in the clean and jerk. First, however, to compensate for a 117kg effort in the snatch.</span></p>

After that, the combined output in both events gave the 22-year-old Ceniza a total lift of 269. In conclusion, a performance good enough for third place in the men’s 61kg category. Behind champion Tuan Kim Thach of Vietnam and silver medalist Shota Mishvelidze of Georgia.</span></p> 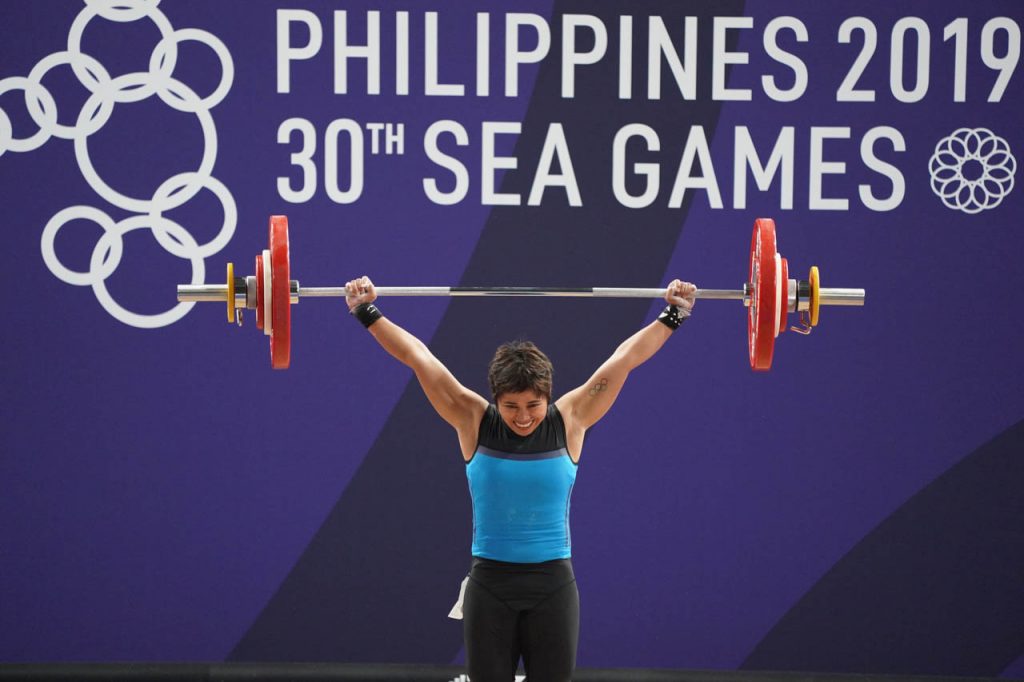 It was a very dominating win for the 2016 Olympic Silver Medalist, Hidilyn Diaz. Now 29, Hidilyn dominated the women’s 55kg category at the SEA Games. Hidilyn Diaz hoisted 91kg in the Snatch and 120kg in the Clean and Jerk to amass a total score of 211kg. </span></p>

And nearly right up to the 212kg gold medal performance of Hsu Shu-Ching of Taipei (212kg). The performance sets up Hidilyn for a gold medal chance in Tokyo Olympics next year.</span></p>

This year has been so good to me and I’ve made a large progress in terms of training and technique,” said Hidilyn Diaz who also owns a gold medal in the Asian Games. “We’re in the right track for Tokyo 2020.” (from inquirer)</em></span></p></blockquote> 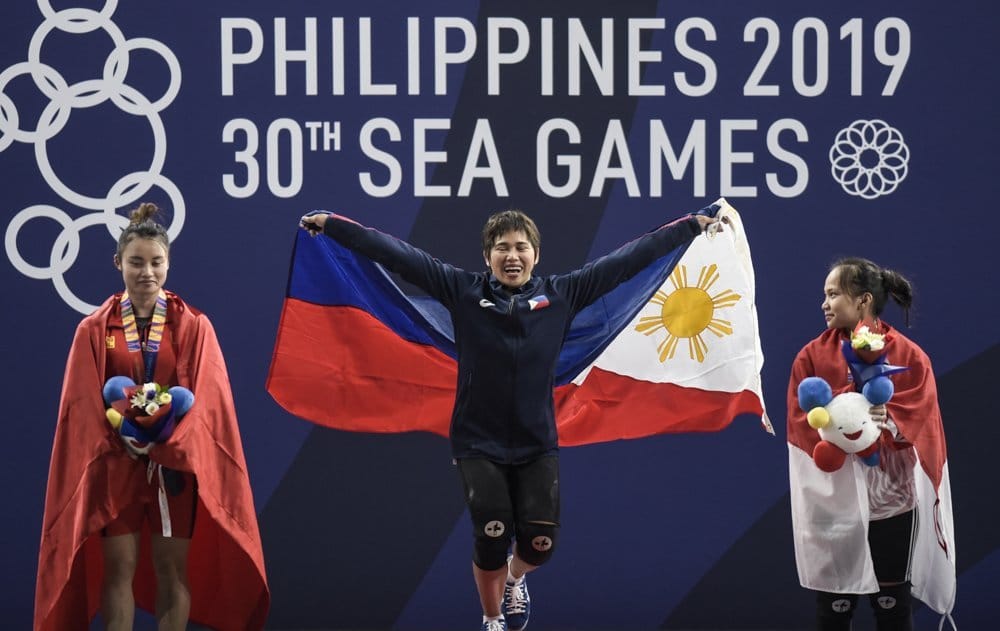 Her SEA Games journey began 14 years ago in 2005, with a wide-eyed 15-year-old. Who ended up finishing dead last. It has truly come a long way, lifting the status of the Philippines. Weight lifting. As a great ambassador for the sport.</span></p>

It has been a good outing for Philippines Weightlifting, with Hidilyn’s niece Mary Flor Diaz taking the bronze in the lighter 45kg category with 159kg. </span></p>

John Ceniza nabbed a silver in the men’s 55kg with 252kg. Hence, the Philippines has completed a complete set of Gold, Silveronze in Weight lifting</a> so far. On the other hand, Vietnam leads the medal tally with 2 golds so far.</span></p>

Asian Games Gold Medalist Hidilyn Diaz dropped to 11th at the World Champs of Weightlifting at Ashgabat, Turkmenistan. However, albeit her performance of 203kg was not far from the 207kg, she registered to win the Asian Games. </span></p>

But it now makes us contemplate how much more difficult it would have been for Hidilyn to win at Asian Games if some nations were not serving doping suspensions.</span></p>

Therefore and changed the weight category from 53kg to 55kg division., But Hidilyn, to rectify this, increased her body weight to 54.70kg. </span></p>

The Shock came when a southeast Asian rival Sukanya Srisurat of Thailand, lifted a big total of 232kg; this was a massive improvement of Sukanya, who finished silver behind Hidilyn in Jakarta at the Asian Games but in the -58kg category, one above Hidilyn where she lifted 225kg. Thus improving 7kg to win World Champs.</span></p>

With athletes from countries whose Federations were serving drug bans returning. </span></p>

Athletes such as China’s Yajun and Wangqiong returned with 225kg for silver and bronze. One athlete from Kazakhstan and Shermetova of, Turkmenstein who was silver behind Hidilyn at, Asian Games, wound up 9th.</span></p> 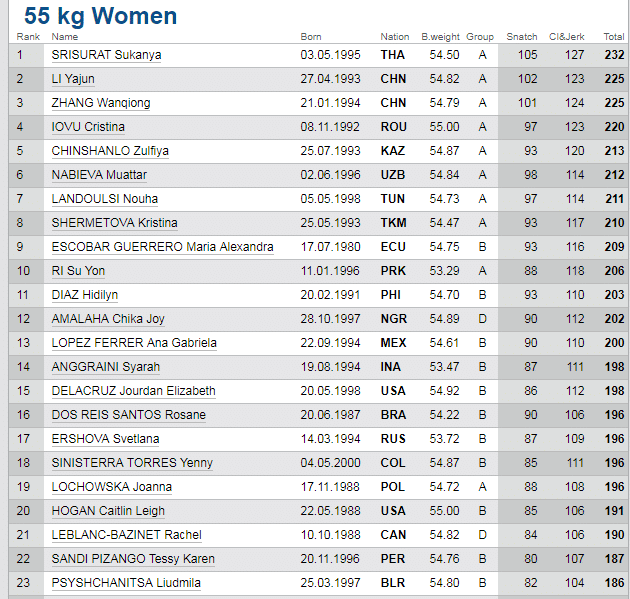 Hidilyn Diaz, for the first time, ranks #1  -53kg in the world for the year 2018. Which only has less than 2 months to go. The update was provided on Instagram by Hidilyn strength coach Jay Futalan of the PSC</a>. Hidilyn Diaz won the Asian Games and targeted the Philippines ‘ first-ever Olympic Gold.</span></p> 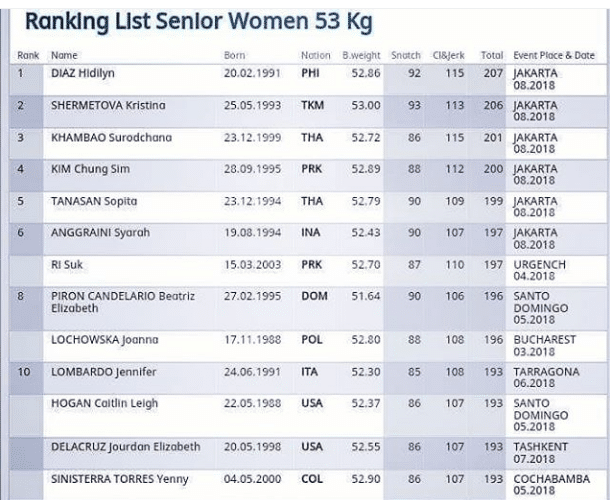 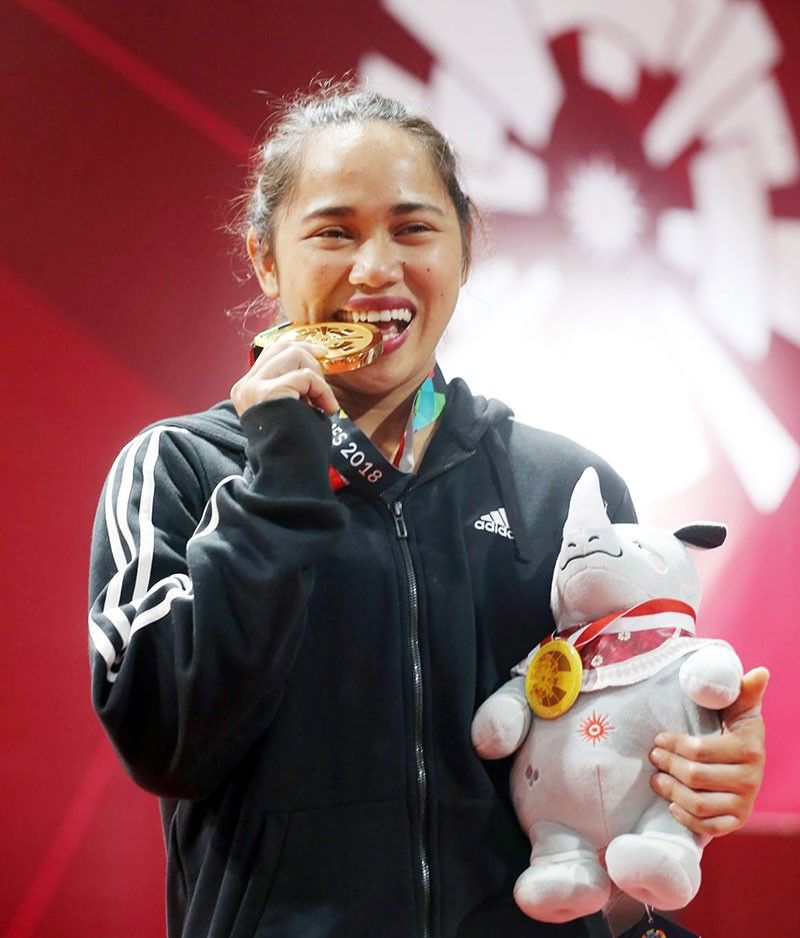 Hidilyn Diaz gives her coveted medal a big bite after delivering the first gold for Team Philippines in weightlifting in the 18th Asian Games.</span>/>Joey Mendoza</span></p>

Hidilyn Diaz delivered the Philippines Weightlifting 1st Gold at the 2018 Asian Games. In conclusion, tying the Philippines effort from 2014 of 1 Gold Medal. </span></p>

Similarly, which then came from Daniel Caluag in BMX. Hidilyn Diaz, the Olympic silver medalist (200kg) in Rio, hoisted 207kg. She was coming second after the snatch round with 92kg. </span></p>

And then pumped out 110kg on her first attempt on the clean and jerk. It was her second lift of 115kg that secured her the win. She attained 117kg in the clean and jerk but failed. It had been noted Hidilyn Diaz had been lifting 120-125kg in training in Clean and Jerk.</span></p>

Kristina Sermetowa of Turkmenistan took the Silver with a 206kg lead after the Snatch round with 93kg.  Sermetowa took silver at the world championships last year. </span></p>

Surodc, Hana Khambao, the lesser-known Two Thai’s, was the surprise bronze medalist with 204kg. World Champion Sopita Tanasan of Thailand, who beat Hidilyn at worlds (210kg in Anaheim last year), blotched up her snatch with only a 90kg effort and wound up out of the medals.</span></p>

She said the win boosted her belief that winning the gold in the Olympics is highly possible.</span></p>

“I am grateful to God that I won the gold medal that all of us Filipinos dream of,” Diaz said. “This proves the Olympic gold medal is possible.”</em></span></p></blockquote>

Which expands the coverage of incentives granted to national athletes and coaches. And P1 million each from the Siklab Foundation and the Philippine Ambassador to Indonesia Lee Hoong.</span></p>

“In the Olympics, no one expected me to win a medal. Here at the Asian Games, everyone expected me to win,” she said. “For two to three months, I was on the edge. I hardly gotten enough sleep. But I just kept on training and gave my fate to God.”</em></span></p></blockquote>

“I am grateful to God that He granted what all of us Filipinos have wished for,” she said. “It can be done—an Olympic gold can be won.”</em></span></p></blockquote>

The Chinese and Kazakhstan athletes who dominated this event did not participate as a doping ban sanction has suspended those federations. In addition, Hsu-Shu Ching, the Olympic Champion (212kg) in -53kg, did not participate.</span></p>