Bringing in many years of honor to the people of the Philippines.

He would go on to win three SEA Games gold medals for the Philippines in the Long Jump. (better if the years are indicated)

The farm boy from South Cotabato dreamt of being an Olympic athlete. That dream became a reality in the 2008 Beijing Olympics.

Henry, for many years, stuck up for his fellow athletes.

And has inspired and continues to inspire young athletes in the Philippines.

He is a very worthy addition to the Legends of Track and Field.

And his name will now live forever among the stars of our sport.

He was spotted and recruited by the National Coach, Joseph Sy, for Mapua, where he enrolled the following year.  He joined the national team in 2002.

Things did not go well for Dagmil at his first SEA Games. He was entered in the Triple Jump in Hanoi in 2003, where he finished last and consequently dropped from the national team.

Instead of giving up as many people would do, Henry realized what it meant to be a national athlete.

With a new fire ignited, he went to work in 2004. And came away with one of the most impressive feats in Philippine Athletic History.

At the National Open in Manila, he would erase the oldest of all national records.

The National Record of Nino Ramirez was set in 1936 at the Berlin Olympics, where Jesse Owens ran. And at the Rizal Stadium, a stadium built with the same architecture as the Berlin stadium, Dagmil’s leap of 7.83m erased the 7.65m record of Ramirez, which stood for 68 years.

He defeated Joebert Delicano, who was the most dominant Long Jumper at that time.

Back to Back SEA Games Golds

The following year Dagmil won his first of three SEA Games gold medals in front of his home crowd, at the same stadium with a 7.81m effort.

Henry became the first man to win a SEA Games gold medal in the Long Jump for the Philippines. He also was a capable sprinter teaming with the 4×100 team to break the National Record in 40.55 and gain a silver medal. He would defend SEA Games in his title in 2007 in Thailand with a leap of 7.87m, again breaking the Philippine National Record and setting the SEA Games Record, which still stands.

With the help of US Coach Ryan Flaherty and coach Arnold Villarube., Henry was able to turn this around.

At the age of 32 at the Myanmar SEA Games, Henry regained his SEA Games title that he had last won eight years ago.

“Adjust your checkmark back one step; you will hit the board, trust me. This will work,” said Flaherty as he noticed Dagmil was too aggressive on the approach.

Dagmil, following this, banged out a 7.80m, which was his best leap in several years and good enough for the gold.

Henry Dagmil The Return of the Champion 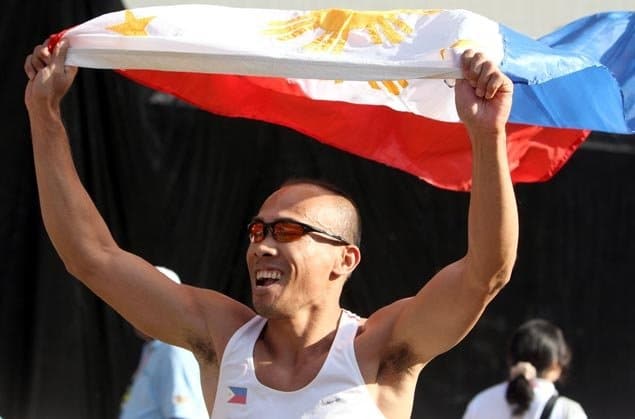 Henry lost his SEA title in 2009 and 2011 to the much younger Supanara of Thailand, finishing with bronze and silver.

With the help of US Coach Ryan Flaherty and coach Arnold Villarube.

Henry was able to turn this around.

At the age of 32 at the Myanmar SEA Games, Henry regained his SEA Games title that he had last won eight years ago.

“Adjust your check mark back one step, you will hit the board trust me. This will work” said Flaherty as he noticed Dagmil was too aggressive on the approach.

Dagmil, following this, banged out a 7.80m, which was his best leap in several years and good enough for the gold.

Henry Dagmil The Next Step

Henry had several injuries in 2015 and was not able to join the National Open.

He was given entry to the Singapore SEA Games by the PATAFA.

He finished a disappointing sixth place with 7.36m.

Henry was a member of the POC Olympic Committee athletes council. And quite fitting as throughout his career, he was outspoken and defended his fellow athletes.

Now, he is a coach in Cotabato who helps nurture and guide the career of young athletes.

Henry balances this with his duties as a father for three boys and one girl.

I want to add on a personal note I appreciated the years that Henry gave to this sport, and it was a great privilege to be his teammate at Mapua when I was younger.

Even though we had our differences from time to time, we later became good friends.

So again, thank you, and I hope you continue to share what you have learned with young athletes for many years to come.