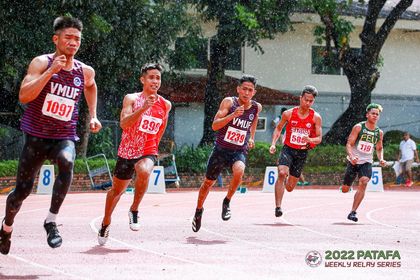 A stellar season for Guhan who has improved from 24.5 to 21.83 in 18 months for the 200 Meter Dash. I would like to thank VMUF Sports Director Dante Camaso for giving me the opportunity to work with Guhan, aswell as his assistants Kimberly Moneda and Justine Salvador for the tireless effort they have put into the program.

Highlights of the season include Silver behind Clinton Kingsley Bautista, while Guhan was still in Grade 12 at the national open, winning the 200m at the Weekly Relays in 21.83 below the Philippine Junior Record of Raul Abangan (1984, 21.84). More recently Guhan set a new PB in the 100m of 10.98 on Dec 4 at Lingayen.

He finished ahead of the other candidates 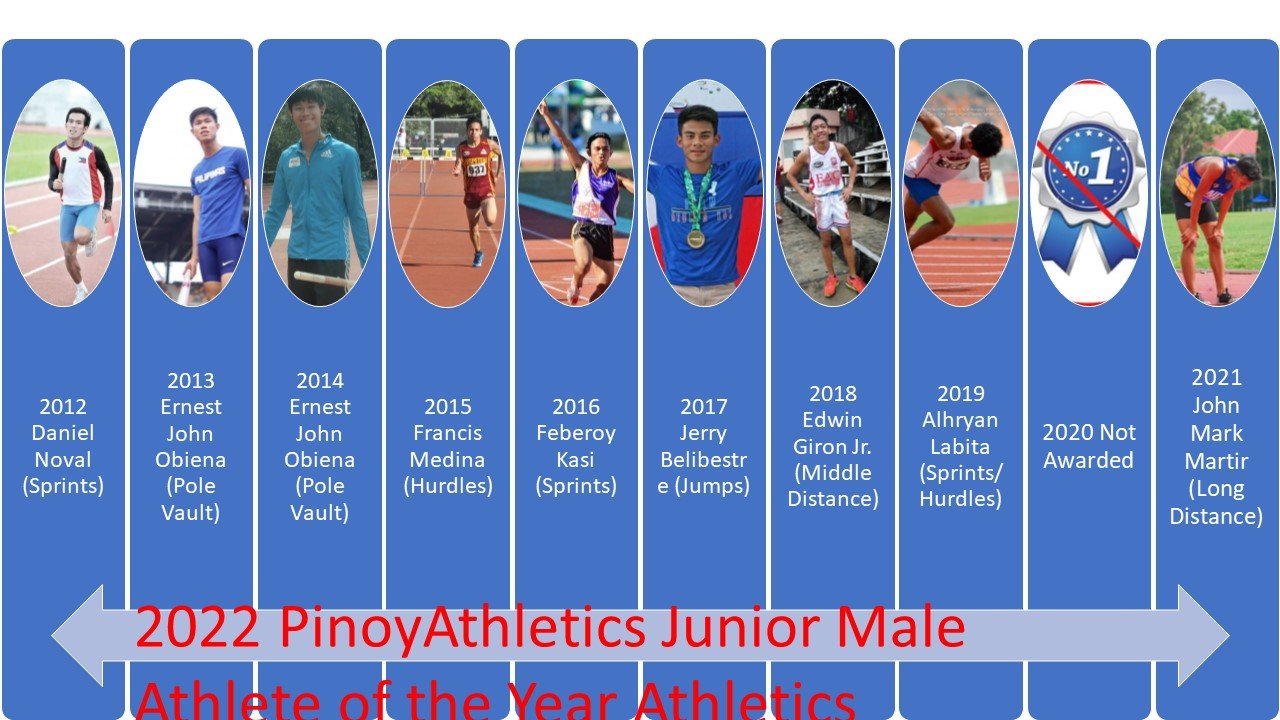 I have burst into tears hearing that Guhan has won the 200m, at the weekly relays. Despite the fact last minute entries of Malaysians. It is a testament to what we do, and the hard work and persistence of Coach Dhan, Coach Kim, and Coach Justine. Now they know why we train in all weather conditions cause it makes them mentally strong in competitions. While I never quite made it in weekly relays 17 years ago I clocked a 21.80 to get the silver at this stadium. It is pleasing to know that I have helped someone else finally get better than I did at this event  -Enzo Williams Level 3 Athletics Australia, Sprints Coach & Co-Founder of PinoyAthletics.

Guhan De Luna Garcia (VMUF/PinoyAthletics Elite) clocked a time of 21.83 +0.2, to take the gold medal at the PATAFA Weekly Relays on November 20, one day after his 19th Birthday. The mark was .01 below the 21.84 Philippine Junior Record of Raul ‘Bato’ Abangan set in 1984.

Garcia who is the 2022 National Silver medalist in 200m beat out Joseph Humpay (Team iSKOLAR Atletiks) who took the Silver in 22.10, and 2021 National Champion Dexter Bilches (University of Baguio) who took bronze in 22.17, Gio De Vera who had earlier taken Silver in the 100 Final in this event was 4th in 22.23. Despite a moderate rain shower during the final, the top 4 in this race were all awarded with personal best times. Palarong Pambansa Record Holder and former member of the National team Vince Buhayan (Mapua) faded to 6th and last place in 23.14.

The Performance comes after Guhan narrow 22.12 to 22.17 win over National Athlete Alhryan Labita on November 5. 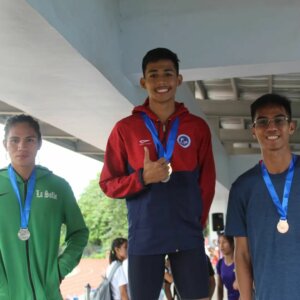 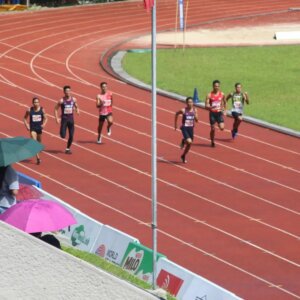 Over the last 18 Months, Guhan has taken his 200m from 24.5 to 21.83 on the VMUF/PinoyAthletics Program. He will next try and bring down his 100m time (11.03) at the PinoyAthletics A4 event on December 4 at Lingayen, which has 12 teams signed up so far and 120 entries. We are most definitely on the right target to are baseline target of 21.50 at the Philippine National Open in March. 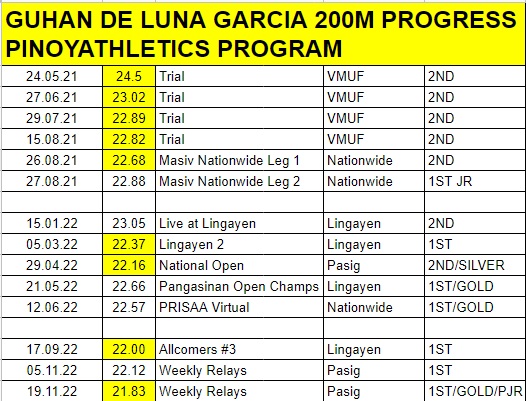 In recent years the National Program has not fared well with National 200 Meter Sprinters in the long run. Starting with National Record Holder Trenten Beram (20.84) leaving the sport.

Jomar Udtohan (21.52) after hamstring issues tried to return to the sport and clocked 23.3 during Weekly Relays.

Vince Buhayan who had run 22.00 in the Palarong Pambansa, not being able to replicate these times and dropped to 22.24 at the start of the year and then 23.14 more recently.

Guhan De Luna Garcia, 18, was the star of the PinoyAthletics Allcomers competition. A new Personal Best of 22.00 in the 200-meter dash marks the start of his 2022–2023 season. The time was only.16 seconds slower than Raul “Bato” Abangan’s long-standing Philippines National Junior Record. Bato was established at a time of 21.84 38 years ago.

Gio De Vera, who was Guhan’s training partner, came in second with a time of 22.40. Jericho Mendiona, of JD Performance Bulacan, followed in third with a time of 24.10. Mendiona improved on his 54.7 runs from a few weeks ago’s weekly relays to win the 400 meters in 52.99. Mendiona second run of the season was over 400m.

Guhan, was still in Grade 12 at the time of the National Championships in Pasig in April. He finished second in the 200-meter race with a time of 22.16, just behind two-time SEA Games 110-meter hurdles champion Clinton Kingsley Bautista (21.91). Guhan finished third in the Men’s 400m at the Philippine National Open in 49.47, just ahead of Labita (48.58) and Alejan of the national squad (48.68).

As a Virgen Milagrosa University Foundation (VMUF) student-athlete. Guhan received financial support from the university for his travel to compete in the Malaysian Allcomers in Kuala Lumpur, Malaysia, in July. Guhan placed ninth overall in the men’s 400-meter race. The first Tertiary institution in the Philippines to sponsor an athlete for an international athletics competition since the pandemic began in 2020 is VMUF. Demonstrating the seriousness with which the administration of the institution takes the assistance of its student-athletes.

Since June 2021 Guhan has been on the PinoyAthletics Elite Program spearheaded by Level 3 Athletics Australia Sprints and Hurdles coach Enzo Wiliams in cooperation with VMUF Sports Director Dante Camaso. Guhan brought his time down from 24.5 at the start of the program to 22.16 within 11 months. The squad includes 2021 National 100m Silver Medalist Rocky Ramos and National School 100m Champion Renier Ranges among Guhan’s training partners.

“He Probably thought I was a bit crazy when I started him off with 10x200m on short rests in 28-30 secs, at the start of the season. But now he is starting to see the output. We are still only in early specific and only have started doing speed work the last week or so. The goal is nationals and we are where we are supposed to be time-wise. Opening the season with a time better than your personal best last season shows we have a great season ahead, but at the same time we need to make sure we don’t over do it as we might be at higher risk of injury” – Enzo Williams

It was a dead heat in the Girl’s 100m with Venus Macaraeg (VMUF/PA) and Mira Ramirez (Laoag) both clocking 13.63. With the photo finish unable to separate them.

While the fastest sprint times in the weekly relays are currently 100m national athlete  Janry Ubas at 11.23, and 200m Sergio Tabornal at 23.35 (FEU) after six weeks of competition.

PinoyAthletics will announce tentative details of its next event PinoyAthlteics A4 this weekend. As we have now had offers from some groups willing to sponsor the next event. Anyone else interested in sponsoring our next event can email us at [email protected]

Please note for reference and to avoid any confusion and clarification of our status PinoyAthletics is in no way, shape, or form affiliated or associated with PATAFA or the PSC.

The promotion of regionalization of athletics. And moving away from a centralized system is one of the goals of the event.
I decided to concentrate on the Province of Pangasinan because I had limited time.

But I’m hoping that other like-minded people in the provinces can start their own self-supporting initiatives. As well as their own leagues and tournaments.

It’s time we begin making greater use of the talent the Philippines possesses in its provinces.

Full Results will be posted here