Great Books for Runners : Run with the Best 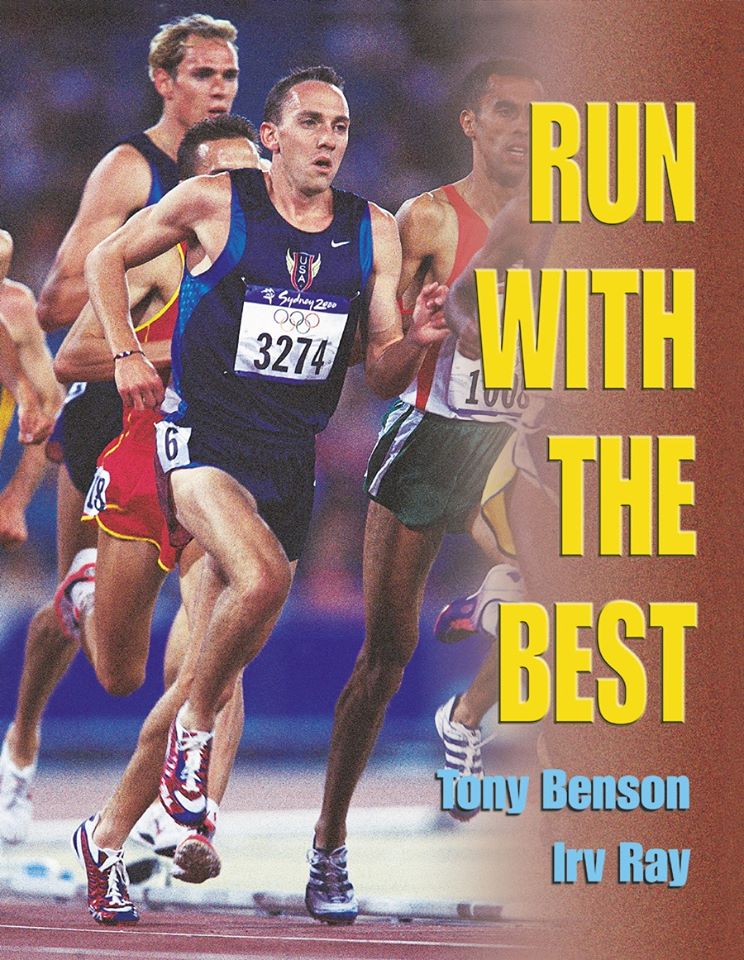 Amazing! I just discovered Run With The Best, the book Coach Irv Ray (AZUSA Pacific University at the time) & myself first wrote in 1998 is still selling for as much $163USD. The book is 178 pages.

The original price was published by Track & Field News and priced at $19.95. At one point during the 2000s, I was informed the used prices were exceeding $300. Thanks Irv Ray for a pivotal role in initiating the original idea.

Irv Ray was a coach Tony was mentoring who wanted to write a book. 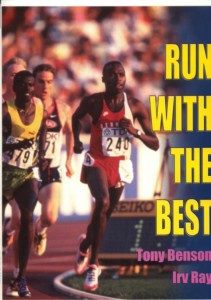 Irv Ray and Tony Benson are two extremely successful coaches and students of the sport, yet they do not allow their expertise to disrupt with scholarly and technical jargon what is an easy read and understood text on how to train and race your best.
Geared more to the coach, yet applicable to the athlete, Run With The Best breaks down the training-racing-peaking process into the steps one must take in order to improve as a runner.

None of it is a theory, it is all time-tested, scientific and proven … the results of the runners who have trained under Benson’s and Ray’s tutelage stand as testimony. The book is full of charts and text that explains what it is you are looking at in chart form and it also includes numerous examples of the workouts that fall within the framework of their training system.

I have used the training system with my runners at the high school level and I have found the principles to be successful regardless of the talent level of the athlete. Improvement comes to any runner willing to follow the model set forth in the book.
Highly recommended for anyone seeking a practical and proven method of training successful runners.

The one thing that I used to hate about being on the track team was that I never knew how to train in the summer and winter. My coaches provided little information about specific training for the offseason. Thanks to this book I now know exactly what to do during the offseason to maximize my performances. I’ve read probably 10 books about training and this is definitely the best one. Why? Because the methods are PROVEN. Sure, there might be some new fancy scientific method that works a tiny bit better, but this training has been proven over decades to work wonders on elite distance runners.

Take Ryan Hall and Anita Siraki – they use the program in this book and have run a 3:42 1500 (equivalent to a 4:00 mile) and a low 10:00s 2 miles, respectively. This book tells you exactly what kind of workouts and how much of each for every month of the year to ensure success.

I can’t imagine what else anyone would need. The only downside to the book is that it doesn’t have anything about specific stretches, buying shoes, etc. but that’s because this book it totally about training. If you don’t know how to stretch already then you probably don’t need this book. If you have big dreams for your running future, buy Run with the Best. I promise you won’t be disappointed.

Runner’s World The Runner’s Body: How the Latest Exercise Science Can Help You Run Stronger, Longer, and Faster 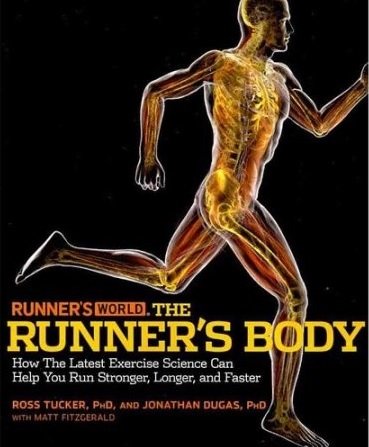 This book was very good overall. Hence it told me a lot of things that to which I wanted the answer and hadn’t be able to find all in one place.

1. NO! muscle soreness is not caused by the lactic acid burn. It is caused by microscopic tears in the muscle fiber!

2. There was enough repetition to know which points the authors were underlining. When reading books that have so much information. It is always good to have some things repeated (they can get lost in the way of getting through the whole book).

3. There was just enough technical information to give you the background necessary without turning it into a Biology text. It appears that their journalist co-author (Matt Fitzgerald) helped them to cut down some of the non-essential information. This book was not the least bit bloated.

5. There were very useful diagrams of atypical stretches that most of us don’t do. 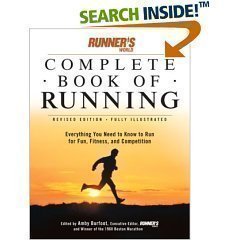 This book was given to me by Former PSC Commissioner Jolly Gomez. While I have now given the book to Isang Andrades another coach so she can continue to develop her skills as a distance coach. So as I decided to focus mainly on sprints this was of more benefit to Ms. Andrades.

Inside, all the secrets of running are laid bare.

From a complete look at running injuries to the benefits of sports drinks versus water to the best way to increase your endurance and train for a marathon. So look no further than Runner’s World Complete Book of Running.

Whether you are a beginner or veteran runner. Here is the advice-both timeless and cutting-edge-guaranteed to maximize your performance and your running pleasure.

Great Books for Runners : The Way of the Runner: A Journey into the Fabled World of Japanese Running Book Review 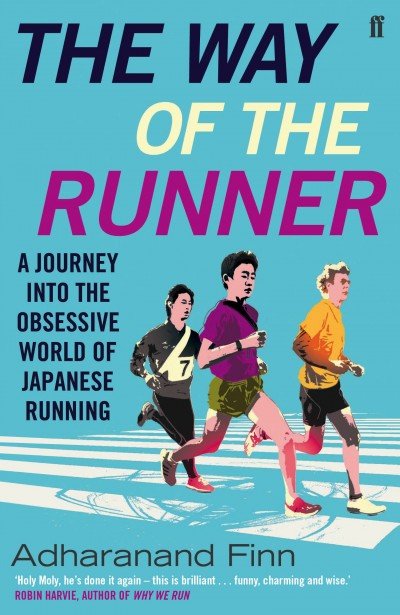 Welcome to Japan, the most running-obsessed nation on earth.  And home to a unique running culture unlike anything Adharanand Finn, author of Running with the Kenyans, has ever experienced.

It may come as a surprise to many people. But Japan is the most running-obsessed country on earth. Most noteworthy is that a 135-mile relay race, or “ekiden” is the country’s biggest annual sporting event. So thousands of professional runners compete for corporate teams in some of the most competitive races in the world. And the legendary “marathon monks” run a thousand marathons in a thousand days to reach spiritual enlightenment.

Yet so much of Japan’s running culture remains a mystery to the outside world. While on par with many of the unique aspects of contemporary Japan. Adharanand Finn, the award-winning author of Running with the Kenyans. Spent six months immersed in this one of a kind running culture to discover what it might teach us about the sport and about Japan.

As an amateur runner about to turn 40. He also hoped to find out whether a Japanese approach to training might help him run faster. What he learns―about competition, teamwork, form, chasing personal bests. And about himself―will fascinate and surprise anyone keen to explore why we run and how we might do it better.

“What an adventure! From the first page, I was hooked. A heartwarming journey into a wonderful world that I never knew existed until Finn swept me up and brought me there.” (Christopher McDougall, author of NATURAL BORN HEROES and BORN TO RUN) 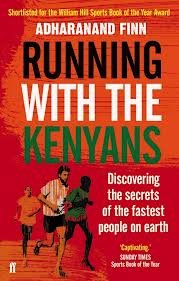 After years of watching Kenyan athletes win the world’s biggest races, from the Olympics to big city marathons. Runner’s World contributor Adharanand Finn set out to discover just what it was that made them so fast – and to see if he could keep up.

While packing up his family (and his running shoes), he moved from Devon to the small town of Iten, in Kenya. Home to hundreds of the country’s best athletes. So once there he laced up his shoes and ventured out onto the dirt tracks, running side by side with Olympic champions, young hopefuls, and barefoot schoolchildren.

Also, he ate their food, slept in their training camps, interviewed their coaches, and his children went to their schools. And at the end of it all, there was his dream, to join the best of the Kenyan athletes in his first marathon, an epic race through lion country across the Kenyan plains.

With global attention on both the London Marathon in April 2012 and the London Olympics in the summer, there has never been a more exciting time to experience what it is really like to train and race with the stars of distance running. 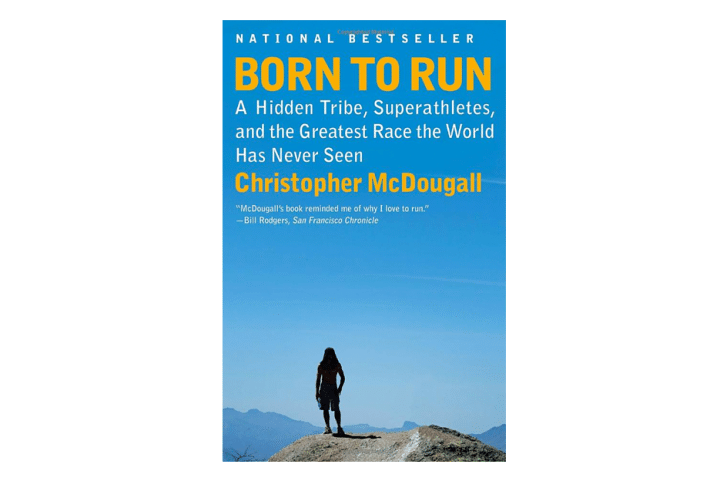 A Hidden Tribe, Superathletes, and the Greatest Race the World Has Never Seen

The astonishing national bestseller and a hugely entertaining story that completely changed the way we run.

An epic adventure that began with one simple question: Why does my foot hurt?

Isolated by Mexico’s deadly Copper Canyons, the blissful Tarahumara Indians have honed the ability to run hundreds of miles without rest or injury. In a riveting narrative, award-winning journalist and often-injured runner Christopher McDougall sets out to discover their secrets.

In the process, he takes his readers from science labs at Harvard to the sun-baked valleys and freezing peaks across North America, where ever-growing numbers of ultra-runners are pushing their bodies to the limit, and, finally, to a climactic race in the Copper Canyons that pits America’s best ultra-runners against the tribe. McDougall’s incredible story will not only engage your mind but inspire your body when you realize that you, indeed all of us, were

PLEASE COMMENT BELOW IF YOU CAN SUGGEST ANYMORE GREAT BOOKS