Filipino Sports Heroes who displayed true heroism during the war 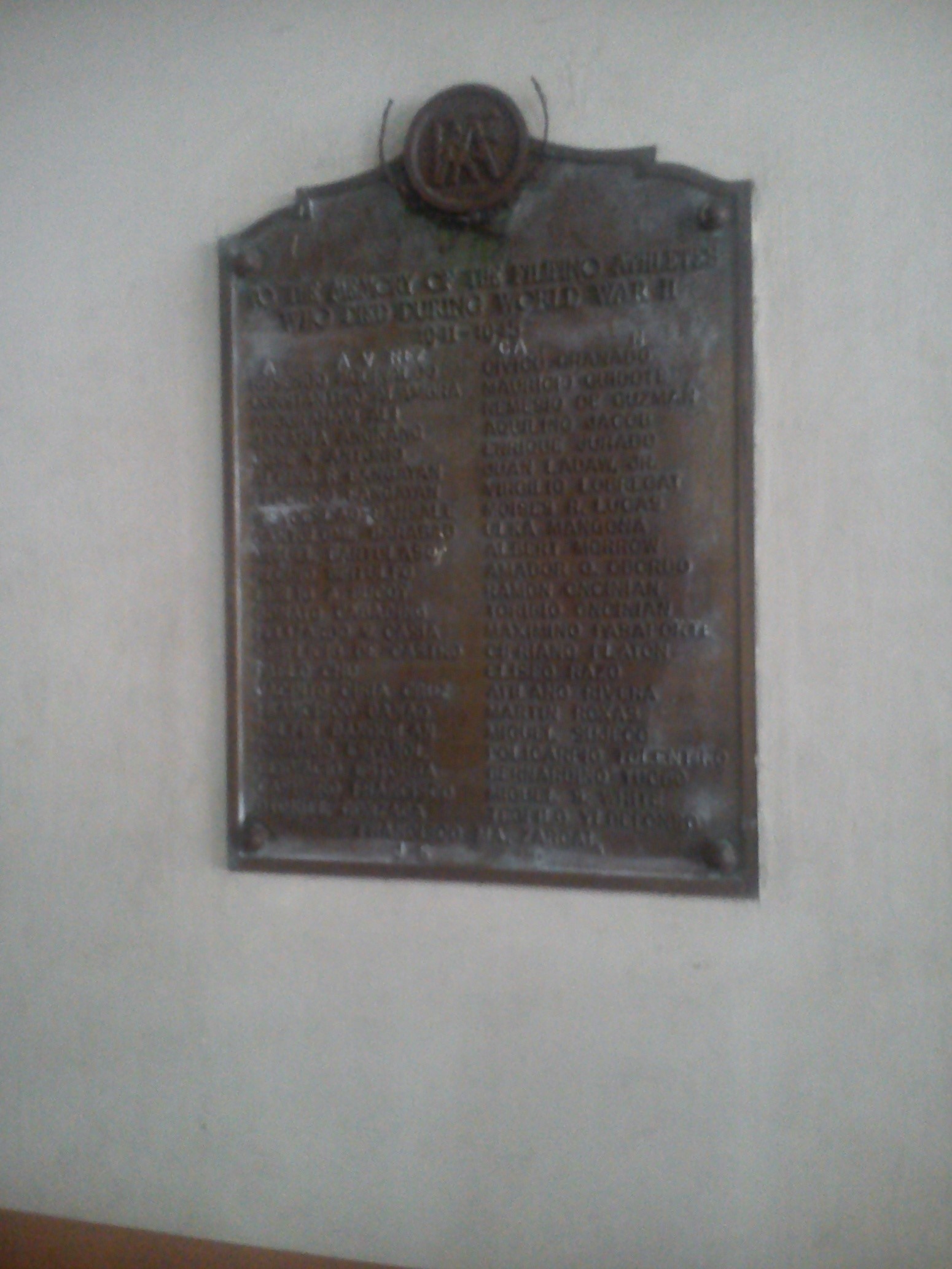 I want to note that Miss Nancy (curator of the PSC Museum), myself, and PSC Engineer and PSL Technical Committee head Alfredo Mascardo Jr.

We were able to solve the mystery of the three faded/missing names on the war Plaque. Outside the Basketball stadium in the Rizal Memorial Sports Complex. The Plaque carries the name of thirty athletes who died in service during World War II. Due to age the Plaque only had a few letters left on which we needed to solve the names.

However thanks to the article (below) by Eddie Alinea of Manila Standard. Wwe were able to identify the three faded names which will allow for the restoration of the War plaque. In time for the centenary of Filipino sports being celebrated later this week.

The three names were

Sports Heroes who displayed true heroism during the war

Filipinos who know their sports history recognize that it was swimmer Teofilo Yldefonso who gave the Philippines its first Olympic medal—a bronze in the 200-meter breaststroke in the 1928 Games in London.

That was four years after an obscure sprinter by the name of David Nepomuceno. Opened the door for Filipino athletes’ participation in the every-four-year event among the universe’s finest athletes in 1924 in Paris.

The pride of Piddig town in Ilocos Norte repeated the feat four years later in 1932 in Los Angeles. Where he spearheaded the country’s richest haul of three bronze medals in the “Greatest Sports Show On Earth,”. Finishing third, too, in his favorite event. High jumper Simeon Toribio and featherweight fighter Jose “Cely” Villanueva duplicated the Ilocano tanker’s feat by romping off a bronze each in the same year.

But perhaps only a few know that Yldefonso was the only Filipino athlete to be elevated to swimming’s Hall of Fame.

An honor which was bestowed on him by the International Swimming Federation (FINA) five years ago in 2009.

In handing the honor to Yldefonso. FINA also took notice of the Filipino’s unfamiliar style,  now known as “Yldefonso Stroke” that has been adopted by pint-sized swimmers, especially Asians,  particularly the Japanese.

Not many know too that Yldefonso,  as a member of the famous Philippine Scouts even when he was still active as an athlete. Put his life on the line in the field of combat in defense of the country’s Independence during the Filipino-Japanese War.

Yldefonso, in fact, died in the infamous Capas Concentration Camp in Tarlac. Along with his comrades during the long, murderous Tarlac-Bataan Death March perpetrated by the Japanese Imperial Army.

Eight other Filipino Olympians, who represented the country in several Summer Games died serving the country during the war.

White, a native of Legaspi City, Albay,  won the country’s lone medal in the 1936 Berlin Games. Winning the bronze in the 400-m low hurdles while owning the distinction of sharing the Olympic stage with legendary track star Jesse Owens of the United States.

White,  who had joined the guerilla movement during the war. Was killed by the Japanese forces d somewhere in the Southern Luzon-Bicol area.

Ciria Cruz and Obordo, meanwhile, were members of the Philippine basketball team. That ended up third the first time the basketball was held in Berlin. In what could have been a silver medal had it not for the quirk in the format.

The national quintet,  nicknamed “The Islanders” by appreciative German fans because of their in and off-court demeanor. Won all, except one of their assignments, losing only to the eventual champion, the United States.

Cruz, who incidentally, was named co-Outstanding Athletes of Half-A-Century by the PAAF along with Yldefonso and football ace Virgilio Lobregat, was executed by Japanese soldiers in Bayombong, Nueva Ecija in 1944.

Of the 52 on the list, 19 were international campaigners in athletics, 10 in swimming, nine in baseball, five in basketball, three in boxing, two in football, two in tennis, and one each in wrestling.

Lt. De Guzman of the Philippine Army was White’s teammate in the national athletics contingent in the 1936 Games of the Olympics. Where Lt.  Gonzaga and De Castro both saw action. Ali was Yldefonso’s swimming teammate in the IXth Olympiad in 1932 in L.A.

De Guzman finished third in the trials of the 100-meter and failed to make it to the semifinal round as only the top two finishers qualified. He was fourth in his heat in the 200 meters and was again left out of the next round.

Gonzaga wound up 31st in the target pistol (ring) event. The same finish in a tie for the 31ST and 32nd in the miniature rifle event. Ali matched De Guzman’s third-place finish in trials of the 100-meter freestyle event and, likewise, failed to make it to the semis.

Jurado,  who wrestled as a bantamweight. Lost his first two assignments. Boxer De Castro, on the other hand, defeated Saucassiabi of Luxemburg in the opening round but bowed to Frenchman Tritz in his next bout.

Joining Yldefonso and Ali in the roster of swimmers who emerged as heroes both in the international field and on the battlefield were non-Olympians Rosendo Aguinaldo, Policarpio Tolentino, Donato Cabading, Miguel Bartolaso, Ulka Mangona, Jakaria Angkang, Bernardino Tugbo, and Mauricio Guidote.

Rivera was the first Filipino ball player to see action in the rich and prestigious Japanese League. But ironically, was killed by Japanese soldiers when he returned home during the war.

Ramon and Toribio Oncinian were siblings of the more illustrious Armando. The pitcher who became famous when he struck out American baseball legend Babe Ruth during the U.S. Major League champion New York Yankees’ exhibition series. Against local teams in the 1930s.

Like Ciria Cruz and Obordo, Carlos Canillas, Albert Murrow, and Robert Keesy also made their mark in many international basketball competitions.

Francisco Zarcal, a USAFFE member, and police officer Martin Roxas. Were the only other boxers besides De Castro whose names were etched on the bronze marker with Jose Miranda joining Lobregat as sports hero in football.

The Lobregat football field in Makati where the statue of the late former Sen. Benigno Aquino, father of President P-Noy, is located, was named after soccer great Virgilio Lobregat.

Concepcion Santos-Cepeda,  a nurse, is the 1921 national singles and doubles titleholder in tennis and was the only female athlete on the list. She was the sister of track and field honoree Simon Santos.  Joining her on the list was another tennis player Juan Ladaw.

In their honor, along with 42  other athlete-soldiers/scouts, the Philippine Amateur Athletic Federation (the ruling sports body at that time).  Installed a 33 x 24 inches bronze marker on July 17, 1951, containing their names on the left wall of the Rizal Memorial Coliseum façade in a ceremony presided over by PAAF president Jorge Vargas.

More than 50 sports association officials, along with their relatives, attended the unveiling of the marker. Letran College athletic moderator, Fr. Martin Diez, 0.P. assisted Vargas in the formal dedication.

Since then, however, the plaque had been ill-maintained and the names of the honorees barely readable.

When informed of the historical value of the marker.  Philippine Sports Commission Chairman Ritchie Garcia, ordered the restoration of the signage in time for the commemoration of the 116th Anniversary of Philippine Independence Day on June 12.