In the lead-up to the 2012 London Olympics, writer Noel Clarke, producer Damian Jones, and director Regan Hall decided to capitalize on pre-event excitement by putting into gear their long-planned project of an all-girl relay team.

In the grand tradition of sporting movies, “Fast Girls” is a film that contains all the clichés of the genre However, still has enough energy and charm to be worth a look – especially for girls.

Bearing more than a few resemblances to Bend It Like Beckham. 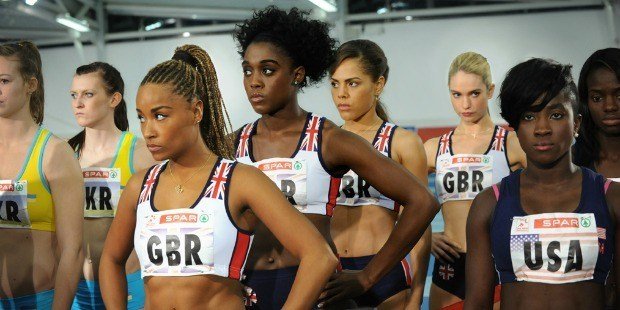 Neither one gets much support from their families – Shania’s aunt and sister couldn’t care less about her ambition, and Lisa’s domineering father puts her under too much pressure.

Unsurprisingly, the two become immediate rivals the moment they set eyes on each other. And the stage is thus set for the two of them to overcome their differences. And compete alongside their fellow teammates Trix (Lorraine Burroughs) and Belle (Lashana Lynch) to bring home the gold.

Shania makes for a flawed, sympathetic, and realistic lead (though you could make a drinking game out of the times she says “innit”) whose problems derive not only from her background However, also her own personal shortcomings.

In her own words, she’s not really a team player, and this comes to the fore when she and Lisa continue to botch up the all-important baton exchange in the 4×200 meter relay.

The key actresses went through a rigorous training and dieting regime in order to earn their washboard abs and athletic physiques, and are backed up by a solid (and familiar) supporting cast, including Phil Davies (Miles from Whitechapel) as Shania’s down-to-earth coach, Rupert Graves (Lestrade from Sherlock) as Lisa’s former-medal winning father, Bradley James (Prince Arthur from Merlin) as the team’s physiotherapist, and Noel Clarke (Mickey from Doctor Who) as the team’s long-suffering coach.