Eumir Marcial ends up with the Bronze

Eumir Marcial of the Philippines lost his match with 2017 World Middle Weight Champion Oleksandr Khyzhniak of Ukraine 3-2 in the Middle Weight (69-75kg) Semi-Final 1 in Tokyo. This means he will miss out on the Gold/Silver medal final match.

Marcial will now battle it out with Gleb Bakshi of the Russian Olympic Committee where he is assured of win or lose of a bronze medal. )

While Khyzhniak will face Hebert Sousa of Brazil in the main final.

The Bronze will see the Philippines collect a medal of each color. Gold from Hidilyn Diaz in weightlifting and Silver from Nesthy Petecio in Boxing.

Marcial made short work of his opponent world #5 Arman Darchiyan of Armenia. Knocking him out after 2 minutes 11 seconds into the match. He will next face Oleksandr  Khyzhniak of Ukraine the 2017 World Middle Weight Champion on August 5 at 15:03 Japanese time.

Eumir Marcial wins after the Referee stops the contest

Filipino Boxer Eumir Marcial won his opening fight only 2 minutes and 41 seconds into the match. In the 75kg Middleweight category at the Tokyo Olympics.

When the referee stopped the fight against his Algerian opponent Younes Nemouchi, an alleged headbutt caused blood to pour from a cut above Nemouchi’s eyebrow.

As a result, and due to COVID-19 and health safety reasons, the referee stopped the fight.

Nemouchi had qualified for the Olympics via the African boxing qualifying match. He had been a late replacement for his injured countryman at the African qualifiers.

Nemouchi had won his first fight against Kavunu Ssemujju of Uganda 5-0.

He then faced Eumir in a bye. A bye is a term given in Boxing when there is an uneven number of opponents in a tournament structure, so some athletes start later in the competition as they have no opponent in the first round.

Marcial, the world’s 2019 silver medalist in the Middle Weight division, now progresses to the quarterfinals to face world #5 Arman Darchinyan of Armenia. Arman has won his last 2 Olympic fights.

Marcial, along with fellow Filipinos Hidilyn Diaz (Gold), Nesthy Petecio, Margielyn Didal, Carlos Yulo, and Elreen Ando, has made the Top 8 in their events this Olympic Games. 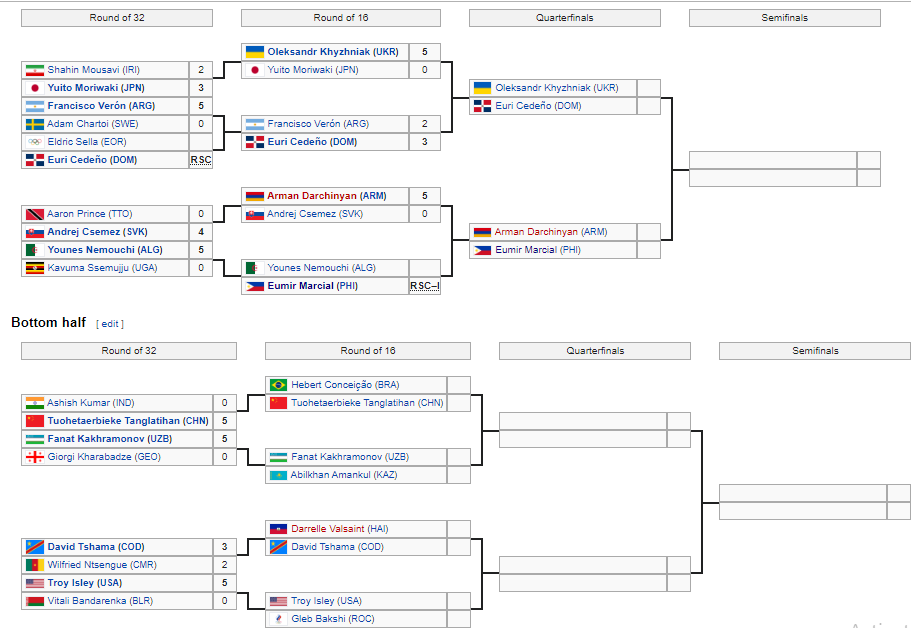