5X SEA Games Champion Eric Cray has missed out on the 2022 World Championships of Athletics by a mere 8 points. The global event will be staged in Oregon, the United States from July 15-24. Cray who scored 1175 points, ranked 43rd in the 400 Hurdles World Athletics Point system. However, only the top 40 were taken for World Championships. Jesus Delgado of Spain was 40th with 1183 pts.

The list is led by world record holder Karsten Warholm of Norway who is as defending champion with an impressive 45.94 world record at the Olympic Games in Tokyo. Rai Benjamin of the United States the Olympic silver medalist with 46.17 has the fastest qualifying time in the qualifying period. 24 of the 40 qualifiers were under the 48.90 outright qualifying standard. While the remainder relied on points. Absolutely no wild cards were given in this event. And 40 athletes will arrange themselves in 5 heats of 8.

Eric Cray who turns 34 in November still looks towards qualifying for the 2024 Olympic Games and adding an unprecedented 6th SEA Games title at the 2023 Cambodia SEA Games. Most remarkable is that Cray’s 49.49 in Marietta Georgia on July 2 is the fastest time he has run since 2016 when he ran his 48.98 Philippine Record.  Qualifying however was 28 June 2021 to 26 June 2022 which makes the 49.49 non-bearing as it was outside the qualifying period. Eric did clock 49.50 on 14 June at Turku, Finland.

The only athlete to qualify for World Championships for the Philippines in 2022 was Ernest John Obiena whose pole vault of 5.93m an Asian Record on September 11 at Innsbruck, Switzerland saw him easily in the list of 40, ranked 6th. 24 of the 40 qualifiers cleared over 5.80m. Obiena was ranked behind Kendricks, Duplantis, Nilsen, Lightfoot, and Braz.

With Knott still recovering from a foot injury. The PATAFA had the very difficult decision of choosing between SEA Games 100m Champion Kayla Richardson, and new Philippine 400 Hurdles Record Holder Robyn Brown for their choice for female entry. Ultimately PATAFA decided on Robyn Brown as she was ranked higher on the world rankings. However, it was later found the Gender Equality rule which allows one unqualified athlete only applies to the Olympic Games and not the World Championships. 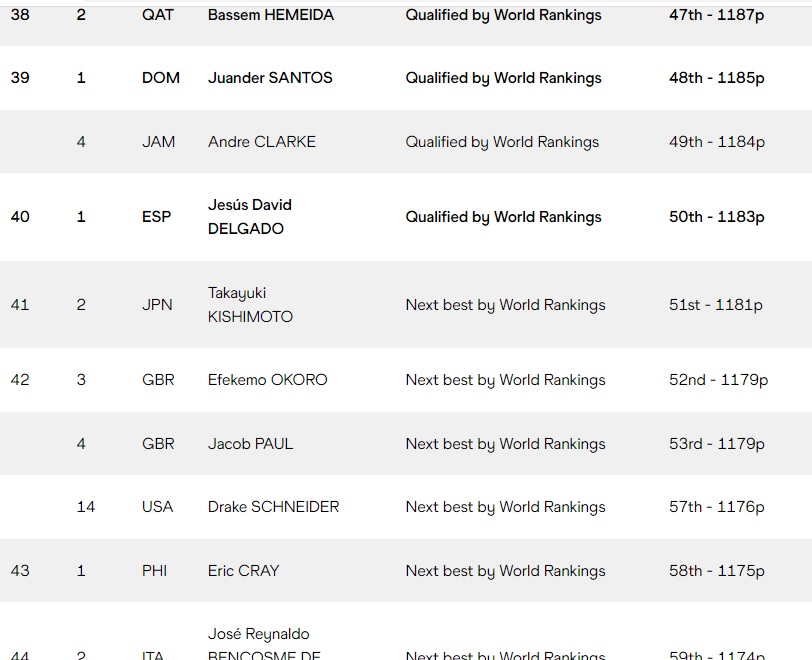 The Great Eric Cray Makes it title #5 at SEA Games

A Piece of History, The Great Eric Cray, proving once again why he is the greatest Hurdler in SEA Games History notching up his 5th consecutive title in the SEA Games 400 Hurdles. And his 7th SEA Games gold medal since he started in 2013 with the Philippine Team. He has 5 in the 400 Hurdles, 1 in the 100m, and the most prestigious of them all 1 in the 4×100 MIXED RELAY!

Cray was forced to withdraw from the 4×100 and 100m due to sciatic nerve issues with his hamstrings. But was able to stitch together another stunning Hurdles victory at the age of 33.  Being pushed to the line by long-time rival Quach Cong Lich.

Cray said he would like to aim for one more 400 Hurdles Olympics in 2024 (at which time he would then be 36 years of age). Cray competed in the 2016 Olympics in Rio and made the semi-finals in the 400 Hurdles finishing 18th of 24. But due to unforeseen circumstances in Europe narrowly missed out on qualifying for Tokyo in 2021. 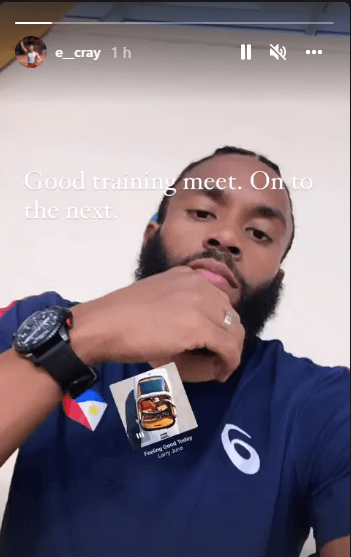 The 33-year-old Eric Cray has won 5 SEA Games Individual Golds and 1 Relay Gold since he started with the National team 9 years ago.

Eric Cray bounces back with his first sub-50 since 2018

It has been over 3 years since The Great Eric Cray has dipped under 50 seconds. His last feat was at the 2018 Osaka Memorial where he clocked 49.68 on May 6, 2018. Surprisingly Eric clocked the same time of 49.68 earlier today with a third-place run. Eric finished third behind Gerald Drummond (49.47) of Costa Rica and Shawn Rowe (49.53) of Jamaica at the NACAC New Life Invitational in Miramar, Florida.

Eric also beat Quincy Hall who had won the A-Race last weekend in Florida. Hall who ran 49.05 last week could only manage 49.82. Last week Cray won the B-Race in 50.40. In 5th place was former Olympian Jaheel Hyde of Jamaica in 49.86. 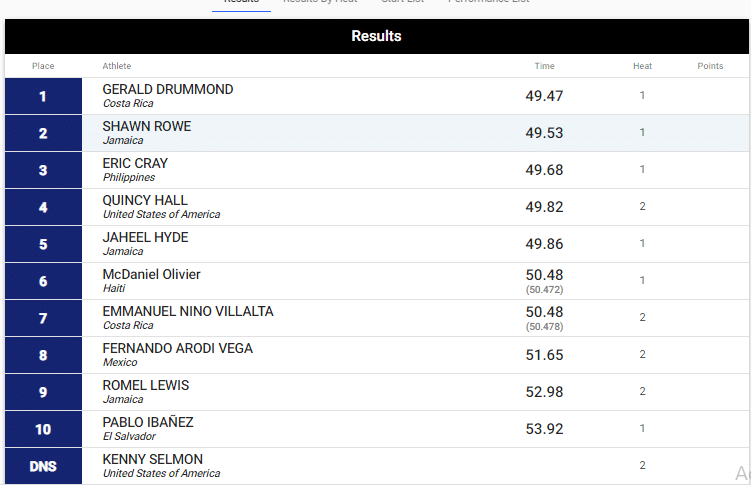 Eric Cray wins Men’s B Race in another Seasons Best

For a full list of Top Ranks for the Olympics

Meets differing from the original schedule. After his 50.84 Season-best wins at the Corky Crofoot Shootout in Lubbock, Texas. Eric Cray clocked 50.77 to win at the APU Last Chance Twilight meet at Azusa. This was instead of the Mt. Sac Relays where Eric was not entered in the 400 Hurdles.

The Pro Track Meet in LA on 14th May and USATF Open at Fort Worth on May 18 both did not have 400 Hurdles Mens Events scheduled.

Eric’s season’s best time of 50.77 now means he has another month with the cut-off on June 29 to make the Olympic standard of 48.90, or the 49.42 (cut-off mark as of this time but could change closer to the Olympics).

*ANY MEDIA USING THIS INFORMATION MUST QUOTE PINOYATHLETICS.INFO

Slowly but certainly, Eric Cray got his second 400 Hurdles race underway, this time clocking 51.20. While just under a decade ago, this would have been quite a good time as the Phi National Record was 51.26 of Renato Unso from 1983 until 2013.

Eric Cray finished the last of the 8 athletes in the Men’s A Race at the Drake Relays in Pennsylvania state on April 24.  Brazil’s Alison Dos Santos was more than three seconds ahead and won in a personal best and world lead of 48.15, with Kenny Salmon of the USA at 48.87.

As of last week, there were 40 slots for the Olympics, and #40 was 49.42. With around 15 athletes below 48.90 outright qualifying standard. These lists will be updated here.

Below are the results of the Drake Relays 400 Hurdles, and interesting times between each hurdle have been recorded. 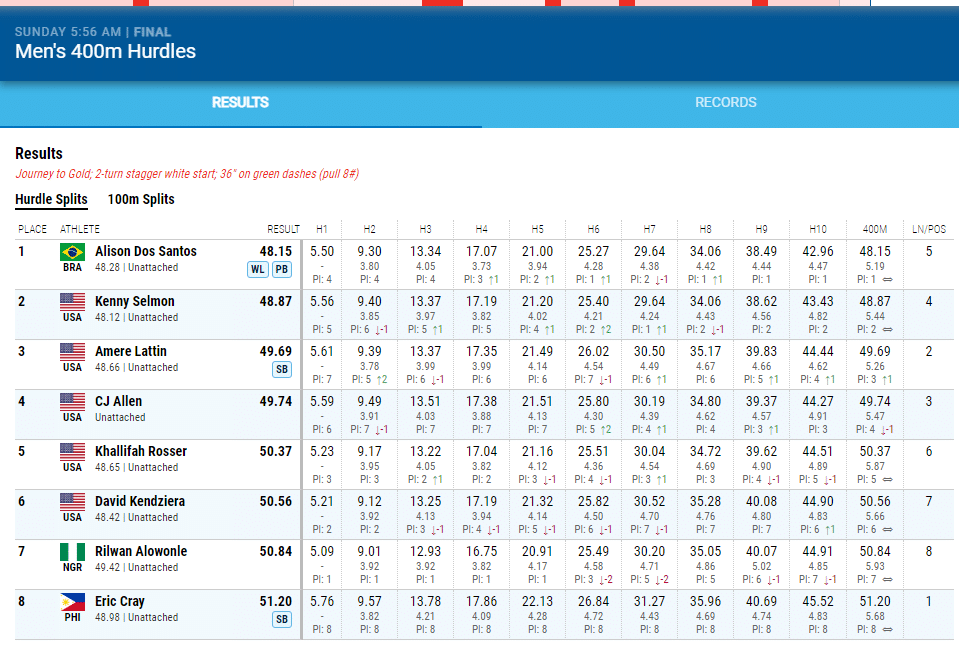 According to his meet schedule, Eric Cray’s next meet will be the Don Kirby Tailwind, on April 22 in Albuquerque, New Mexico. 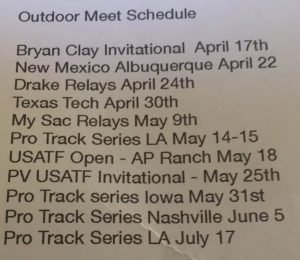 Thank you to Mr. Bong Pedralvez for the quote.

“I wish him (Cray) all the best but he really has a mountain to climb,” noted former Philippine Sports Commission statistician turned athletic coach Andrew Pyrie, who runs the pinoyathletics.info website and currently trains some outstanding local junior runners.

Pyrie said this might be Cray’s last chance to qualify for his second straight Olympic Games after making his debut at the Rio de Janeiro Olympiad five years ago “because he will be 35 years old when the next Olympics rolls around.”

Eric Cray topped the heats of the 60-meter dash at the KMS Open on January 31, in Birmingham, Alabama, in 6.75. Cray did not contest the Semis or Finals, which were won by Andrew Hudson of Empire Athletics in 6.67 and eventually in  6.63. It was a close finish with Hudson holding off two unattached athletes, Jackson Webb and Hakim Ruffin, who were centimeters behind in 6.64 and 6.65.

Cray holds the National Record of 6.57, which he has set twice at the Don Kirby Invitational in Albuquerque, New Mexico, on the 14th of February 2015, and at the Asian Indoor Championships Doha, Qatar, on the 19th of February 2016.

Eric has scratched from the 200m at the KMS Open; he was originally on the start list. 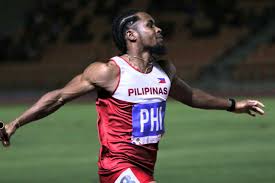 32-year-old Eric Cray opened his season with a two-second place in the KMS Invitational in Birmingham, Alabama, on January 24, 2021.

ANY WRITING USED FROM OUR WEBSITE BY MEDIA MUST INCLUDE A CITATION TO PINOYATHLETICS.INFO

He was the first Filipino ever to win a medal and a Gold at the SEA Games (2015). He also was the 2nd Filipino after Abdul Guiapar.

While Eric will be unchallenged in the 400 Hurdles, the next fastest man being silver medalist Quach of Vietnam with 51.03, is worlds apart.

A difficult schedule of 4 runs (100 and 400 Hurdles Heats and FInals) in the space of fewer than 2 days made it difficult for  Eric to defend his titles.

Eric also helped the Philippines 4×100 to a Bronze with a new National Record of 39.11.

Cray now has 3 Consecutive SEA Games titles in 400 Hurdles and looking to make that 4 in Manila.

Eric, due to fatigue, opted not to run the 4×400 relay. His 4 SEA Golds place him at #11 on the All-Time List for the most number of Individual Golds at SEA Games. 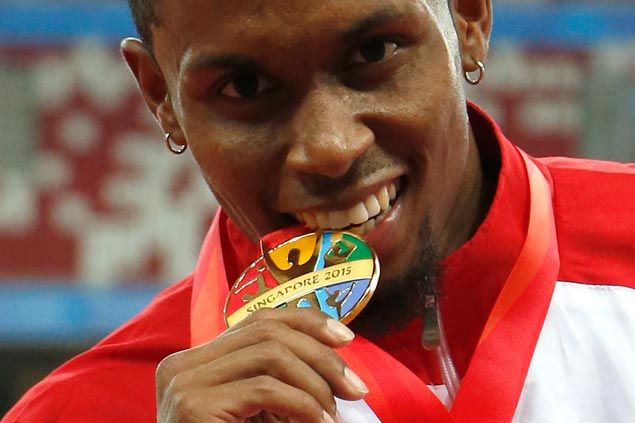 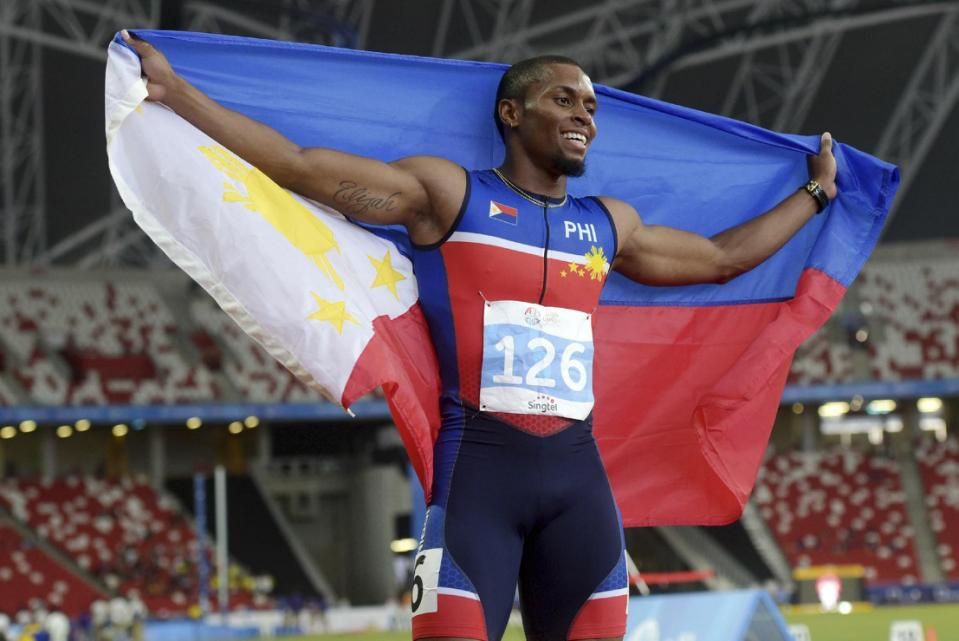 Trenten Beram has the Philippine Indoor Record of 46.77.

Eric has stopped running the 60m after the Asian and World cancellationIndoors’ cancellation to focus on qualifying for the 400 Hurdles in the 2020 Tokyo Olympics, which he has until June 26 and must run 48.90.

Eric Cray may have gone down last month as the Greatest 400 Hurdler in SEA Games History.

But that did not exempt the hard-working 31-year-old from getting back into his routine.

Cray clocked 47.89 for the 400m Indoor on Friday Indoors, taking an easy win at the Martin Luther King at Albuquerque, New Mexico.

This is probably worth about a 47.0 second 400m outdoor, which is better than any of the current active Filipino 400m runners.

‘Cray then took third in the 60m Final in 6.71, a time he also mirrored earlier in the heats.

This is somewhat behind the 6.57 national record he established in 2015 at Albuquerque.

And also at the 2016 Asian Indoors, where he took the bronze.

Eric has been running at the Martin Luther King meet at Albuquerque every year for the past 6-7 years. He currently holds 4 indoor records and 2 individual outdoor records for the Philippines.

Eric is lined up for the Asian Indoors in March.

He needs to hit 6.63 to qualify for the world indoor championships again.

Please note there are no 400 Hurdles at World Indoor Championships.

(please send any other results we have missed to [email protected])