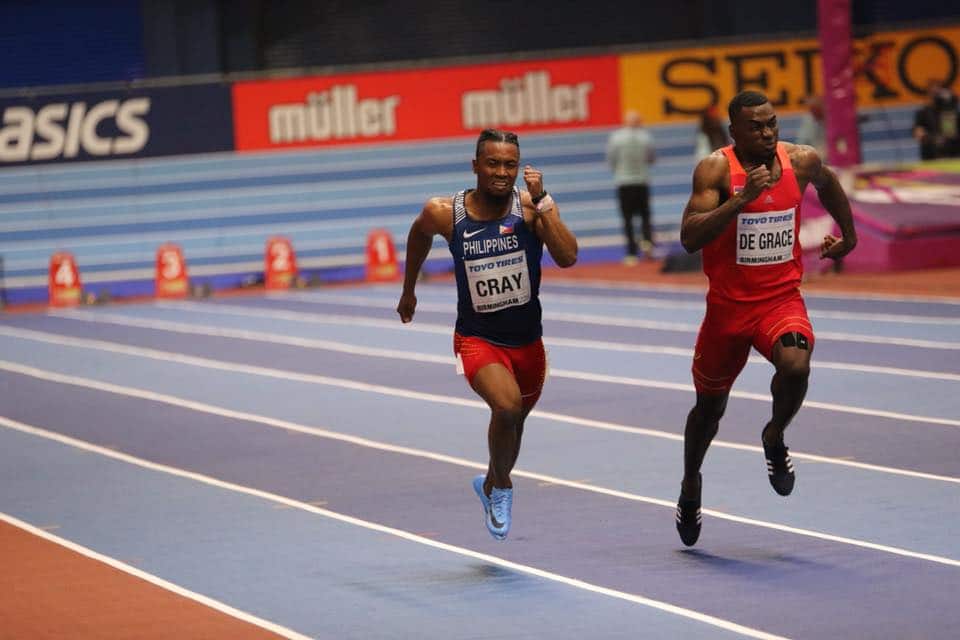 Eric Cray wins the Asian title in 400 Hurdles in the pouring rain.

As of August 2, Eric Cray is the highest-ranked in Asia in the delegation, moving ahead of Ernest Obiena.

It seems like Asian Champion Eric Cray will have it tough in his event unless Abderrahman Samba of Qatar does not show or gets injured.

Especially relevant is that Samba leads the Asian Rankings with 46.98. And has run the top 7 times in Asia under 48 seconds.

While after Samba, there is also Takatoshi Abe, who has beaten Cray during the Olympic games.

Most noteworthy is that both Samba and Abe have run faster than Crays 48.98 PB from 2016.

Followed by a more likely athlete Ayyasamy Dharun of India, the 20-year-old having ran a PB this year of 49.45.

PA Predict if everyone shows. Samba (Gold) Abe (Silver). And between Cray and Dharun (Bronze). Consequently, Cray should easily improve on his 6th place finish at the 2014 Asian Games.

Cray bows out of heats at World Indoors

At World Indoors in Birmingham 2016, Asian Bronze Medalist in 60m Eric Cray clocked 6.81 and couldn’t pass the heats on this occasion finishing 4th in Heat 5.

Ronnie Baker (USA) #4 All-time in this event won the heat in 6.57. Cray finished 28th of 52 competitors, with the Top 24 advancing to the Semi-Finals later today.

Cray was the only southeast Asian athlete participating in the world indoors.

Meanwhile, Asian Champion 400 Hurdles Champion Eric Cray. Got in his first run of the year. Cray, who is 30 later this year, ran the 600 in 1:29 and 200 in 22.07. Perhaps a good practice refresher to start his season. Cray is coached by former Jamaican Olympic 400m runner Davian Clarke, the head coach of UTEP.

Also, at the meet Fil-Heritage Pole Vaulter, Marc Nicolas leaped 4.68m to start his season. While over in Ottawa, Fil-Canadian Jonelle Halog clocked an early season 7.05.

Any Other Results of Filipino athletes Local or International, please email