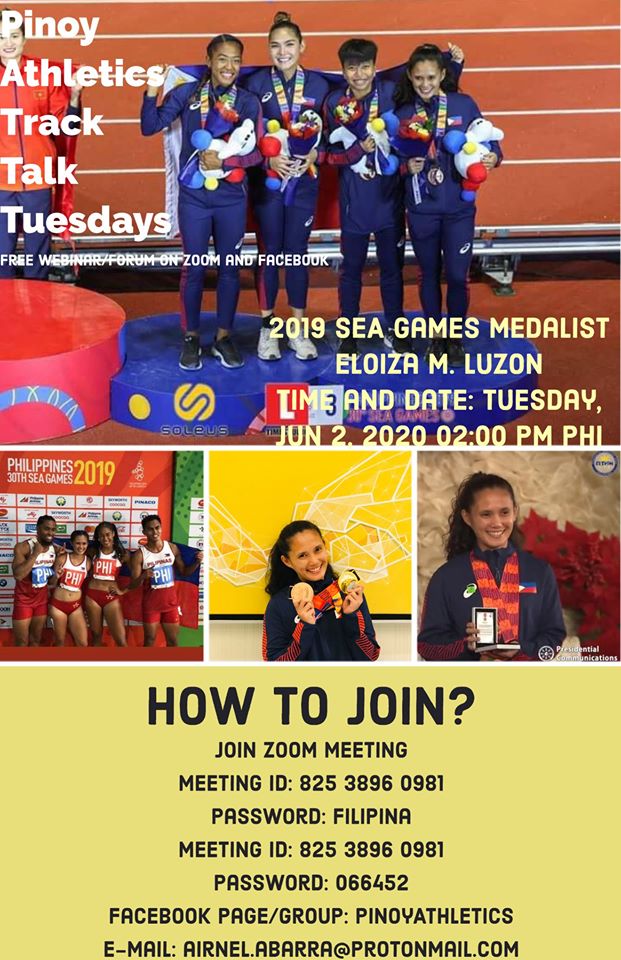 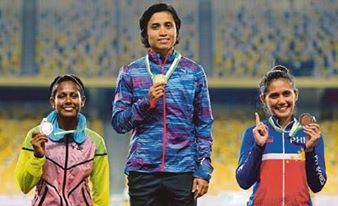 From an early promising athlete and one of the youngest winners at the Palaro. Eloiza Luzon went onto UST. From there she was stuck at 12.10 and 24.95 from 2014. However, under American Coach Rohsaan Griffin she was able to take her times down to 11.99 and 24.69 within a few months.

Luzon is lined up in the 4x100m squad for the SEA Games joining 3 Fil-Heritage athletes Kayla and Kyla Richardson and Zion Corrales-Nelson. A relatively inexperienced athlete at the international competition who is building her confidence and fixing her form. She makes her debut at the 2017 SEA Games.

While not included in the individual events at SEA Games Eloiza in her very first SEA Games took a Bronze and helped the 4x100m team to a new National Record of 44.81 erasing the 1991 record of 45.29 which included Lydia De Vega.

For four years Eloiza Luzon battled it out for the Palaro 100m Title. After being runner-up for years in a row. Finally, she claimed the prestigious title at Dumaguete in 2013 in her final year of high school.

In her first year of High school, Luzon finished runner-up to Michelle Loterte 12.75 to 12.83 ht. With Jenny Rose Rosales of Laguna third in 12.87ht and Schrijvers dead last.

In 2011 it was a leveled up Rosales that blew away the field to win the girls century dash in 12.4ht beating Luzon 12.8ht  into Silver again. Luzon faded to fourth in the 200m which was won by Rosales. Rosales won by more than a second from the silver medalist in a new Palaro Record of 25.4. She did, however, place third in the 400m behind Rosales who set a new Palaro record at 57.4, and 2010 Champion Nelma Insang who equaled the old record in 58.1. Luzon timed 1.00.0.

In 2012 at Lingayen, Schrijvers who had placed dead last in the previous two years beat her daemons to win the Palaro title in her final year. Schrijvers had been running well the whole year and the only real challenge would come from Eloiza Luzon whose form was unknown heading into the championships. Luzon for the third year in a row finished with the silver medal  12.5 to 12.6. Schrijvers went on to win the 200 in 25.6 with Luzon finishing third.

The pressure was now on for Luzon. Now in her final year she had been the bridesmaid three years in a row in the century dash. Would History repeat itself? or would it be worth the wait?

Heading into 2013 the favorite leading up to the finals was Mary Anthony Diesto who had the fastest time that year in the WV Palaro clocking 12.4 and had equaled that time on 2 other occasions. Luzon in comparison had only ever run that time once.

All fears swept aside when Luzon ran 12.2 in the elimination rounds qualifying fastest into the final. But despite this, the pressure was still on as the conditions were not as good in the final. However, in the rain, Luzon emerged victorious in a slower 12.6 beating teammate Glaiza Salcedo.

The highly favored Diesto faded to sixth place, but like Jenny, Mau and Luzon before her would eventually win the coveted 100m title in her fourth year in 2014.

After finishing at the Palaro Luzon persuaded by her teammates took up the offer to join the team at UST. She finished second behind Rosales in the junior 100m. She would go on to win the 100m Dash at the University Games later that year with Jenny not participating in tying her best time of 12.4 again.

At the UAAP Luzon finished second to Rosales in both 100 and 200 dashes, again tying  12.4. She would, however, anchor her UST Tiger Cub team to victory in the 4×100 relay against Rosales (University of the East).

2014 saw continued success for Luzon, who was having a tough time adjusting to the weight regiment at UST but was gradually making some technical improvements. At the National Open, she finished a disappointing fourth in the junior 100m losing to Leah Ann Creer and teammate Glaiza Salcedo who she had beaten at the Palaro 2013.

During the weekly relays, she tied her best time several times 12.4 and improved her 200m PB to 25.4. In the lead up to the finals, she blasted out of the blocks to a surprise win over Rosales recording a new PB of 12.2 in the process.

In the finals of Weekly Relays, she won the Junior 100 in a new PB of 12.2, facing off against a lot of the 2013 Palaro field. During the 200 she was behind senior teammate Michelle Loterte and 15-year-old Karen Janario of Leyte. But claimed the gold as the fastest qualified junior in that event in 25.5 just outside her PB.

Luzon will make her debut for the Philippines in the 100m and 4x100m events at the ASEAN School Games. Although on paper is good for silver based on 2013 results. The start lists indicate a much higher level of competition this year.

Luzon although very keen to one day join the national team, is being encouraged by her coaches to finish her studies first. For this purpose, the relay goals look more on the horizon for the 2017 SEA Games when she is ready to run against and with the older female sprinters.

At the Nationals in Ilagan Luzon took Bronze behind a Korean runner and Zion Corrales-Nelson. She also beat veteran sprinter Princess Joy Griffey.