Elma Muros – Why you should Grab the Opportunity #1? 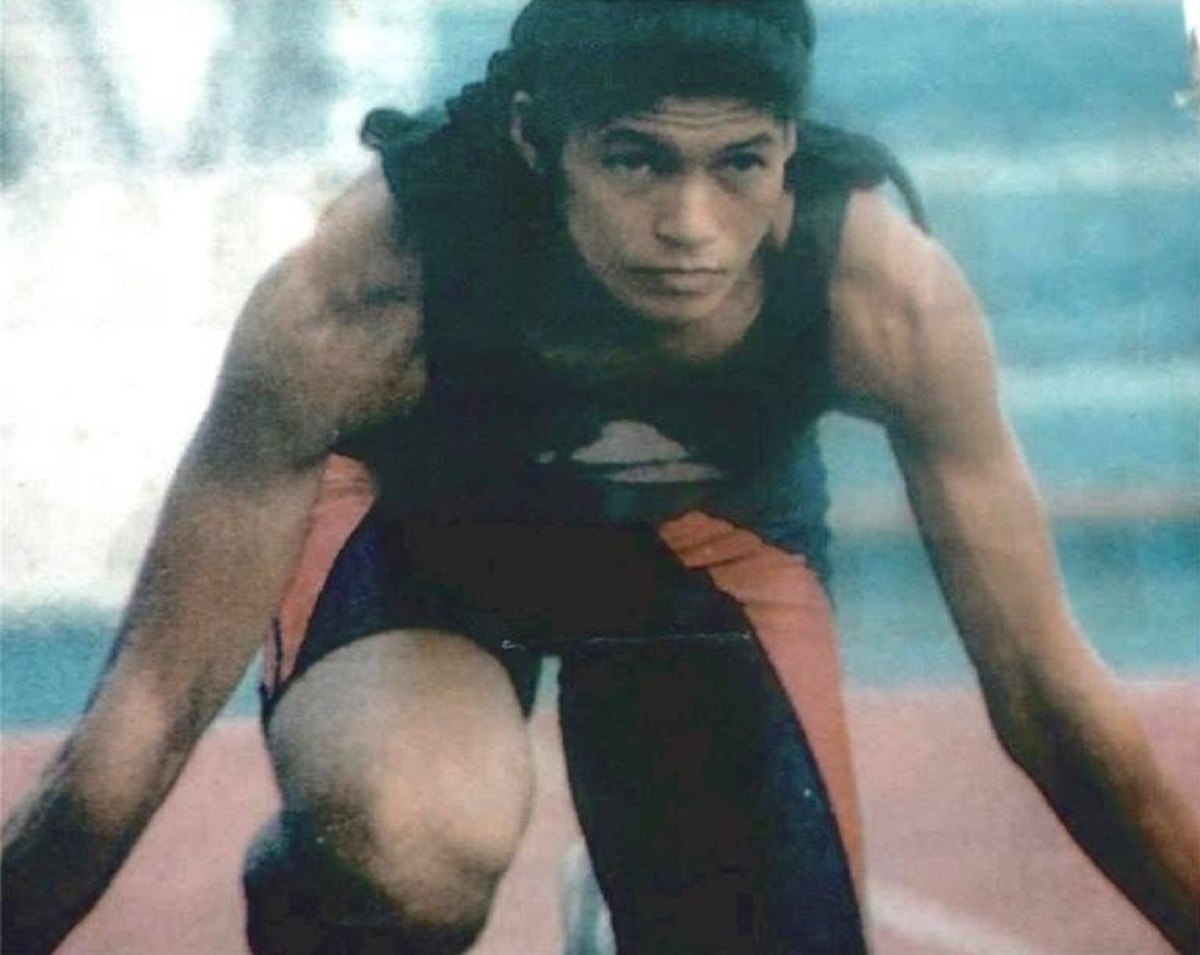 The Early ’80s was an exciting era for Philippine Track and Field.

The country was winning international sports events in the region here and there. And medals were not hard to come by.

Among them is a no-nonsense runner and durable heptathlon athlete named Elma Muros.

Relatives had already had an inkling of what she was going to be fast, even at a young age.

Her mother Alice was once a 400-meter runner herself in her youth, and at a young age, Elma Muros loved to jump over plants.

But her real entry into professional sports came early when at 14.

Elma Muros became an athletic scholar at Roosevelt College in that province while training and competing.

She was also one of the star athletes of the high-profile sports program called Gintong Alay.

In the powerhouse Rizal team, she was trained and developed by the Late Jun Tolentino Sr.

Later that same year, she was discovered in the Palaro system in 1981.

Muros teamed with the veteran Lorena Morcilla and two other young sprinters, 17-year-old Lydia De Vega and 16-year-old Perla Balatucan, to win the silver medal in the 4x100m Relay.

This established the continued domination of Philippine Women at the SEA Games in the Long Jump as they won it every year from then up until now, apart from in 2001.

Elma Muros would defend that title in the following sea games (6.11m).

What is special about this leap as a testament to Elma Muros unique’ ability the record remains unbroken.

Even eventual National Record Holder Marestella Torres leaping 6.03m is the closest some 15 years later failing to break it. 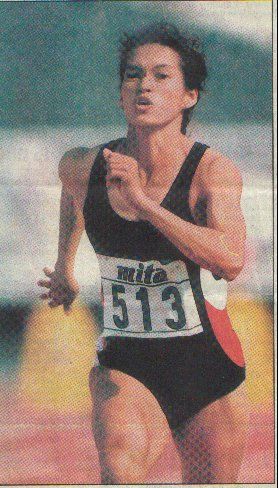 The Philippines was not blessed with several remarkable female athletes in the 1980s. I can say that depth is significant to help produce champions. There was Lydia De Vega, but there was also a supporting cast of female sprinters who were very good in their own right Ganosa, Sinoro, Lobos, Punelas-Carpio, Balatucan, and Nolido.

Elma Muros excelled in both track and field events. She became as much of a household name to the general public at the same time as Lydia. The Philippines had not just one but two high-performing and attractive female athletes, which led to an all-time high interest in the general public with track stadiums packed.

De Vega would venture into the long jump taking the sea game title from Elma Muros in 1987 with a leap of 6.27m. In 1989 Elma took the record back at the National Training Games in Baguio with a leap of 6.39m. Elma Muros then won the next six sea games titles in the Long Jump. Elma won eight of the nine events she entered in Baguio. She ran 14.0 in 100 Hurdles into a headwind, and 24.1 in the 200m dash.  Elma Muros gave SEA Games Champion Nene Gamo a good fight in the Heptathlon but was forced to quit after hurting her back in the high jump.

She would next enter Far Eastern University to take up B.S. Management and meet fellow sports scholars from Mindanao named Jorge “Jojo” Posadas. While an early marriage was not in her plans, it was a match made in “sports heaven.” At 21, she decided to quit school and raise a family (she had two children Klarizze Posadas and George Posadas Jr.)

Elma remained steadfast and dedicated in her career as an ASEAN or Asian region-wide athlete all these years; the the hard work did not go unrewarded either.  She has accumulated more than 200 medals and has been cited by different organizations for the honor she has brought to her country. Asked which is the most special,

(All my medals are important, gold or simple ribbon because I worked hard to get them).

5. The ‘Iron Woman’ of Philippine Athletics

With the departure of Lydia De Vega-Mercado to start a family and her eventual retirement in 1993. Elma quickly established herself as the Alpha female of the Philippines Track and Field.

Elma’s career thrived in the 1990s. She began to bag countless awards and collect magnanimous titles from various prestigious events worldwide. For one, she was awarded the “Athlete of the Year” after the 1996 Southeast Asian (SEA) Games. One but two athletic institutions are known as the Sports Communication organization of the Philippines SCOOP and the Philippines Sports Writers’ Association PSA.

Muros was dubbed the ‘Iron Woman’ of the Philippines.  It also seized the legendary epithet of “SEA Games Heptathlon Queen” after her control of the heptathlon in the 1997 Southeast Asian Games.

The swift Filipina sprinter and long jumper hurdled her way to success as she won a total of 15 Southeast Asian gold medals. And many other awards, including a bronze medal from a 400-meter hurdle in the 1990 Beijing Asiad. Also, another Bronze in the 1994 Hiroshima Asiad Long Jump. But for the retired trackster. Her sweetest triumph was the Century Dash that she won in the December 1995 SEA Games in Thailand.

Last September 2001, after finishing bronze in the heptathlon events at the Southeast Asian Games in Kuala Lumpur.

Elma Muros finally announced her retirement.  Long after, her erstwhile contemporaries like Lydia de Vega and Isidro del Prado left the sports world after 21 years of competition. And holding a total of 15 SEA Games gold medals, one of the most by any athlete,

She says, “Alam ko na sa isip at katawan ko na pwede pa ako pero tama na. Nakamit ko na ang lahat na pwede kong makamit. Nagpapasalamat ako sa Diyos
binigyan ako ng pagkakataong makamit ang mga karangalang ito.” (I know in my mind and body that I can still do it but it is over. I have gotten everything I aimed for. I am thankful to the Lord for giving me these chances to get all these medals.)

In 2002, the Philippine Amateur Track and Field Association (PATAFA) President Go Teng Kok announced Elma’s retirement. He said that their emotions clashed as they all felt both happy and sad about Elma’s decision.

They were saddened because they will surely miss Elma Muros and her amazing humility despite her huge success. On the other hand,

they also felt happy because they became part of her glorious life and career, at the least. The joy and honour that she had brought them were incomparable, and the group moved on from Elma’s retirement. They shared with the Iron Woman’s new goal in life — to train more young and promising tracksters. Thus an important era in Philippine Track and Field History came to an end. The last three major stars of the Gintong Aloy days ended a career that spanned over 20 years.

7. Now and Then: Elma Today

But she has not given up sports altogether. However, her competition days are now behind her. Elma is teaching and sharing her experiences this time.

She presently serves as Consultant for Grassroots Level for the Philippine Sports Commission, where she discovers and helps scout young athletes with potential from the provinces and other schools.

As the head coach for the University of the East Women Tracksters, Elma last December 14-17, 2002, propelled her ward to glory by winning the Championship in the women’s athletics division of the University Athletic Association of the Philippines (UAAP) Tournament, dethroning former winner, University of Sto. Tomas.

Asked about this feat, Elma says,

Busy Elma also reveals she derives the same if not more enjoyment from training young students at Brent International School in Sta. Rosa, Laguna. She says

“It is a lot better to teach young kids sometimes because they are just starting and they don’t have bad habits to unlearn, unlike older wards.”

But most of all, Elma is a hands-on wife and mother.

Even with household help, she makes sure she has a say in the meal planning and how the house is maintained.

“I like to fix the house a lot. That is why when I went to Magdiwang for one day

last December, all I did was to stay inside the house and fix things there. I also hung some of my sports memorabilia on the walls of our old house so that my relatives and neighbors would get a chance to read my experiences and accomplishments. Later some children and teachers came over and interviewed me.”

These Days Elma Muros is also a TV celebrity, she appeared in a series of the Philippine version of Survivor.  And also played a role as ‘Coach Rose’ in the Filipino Indie Cinema Film Thelma. That tells the story of a runner with who Elma Muros-Posadas shares a similar life story.

8. Finally, what is Elma Muros-Posadass’s message to her idols and young athletes who want to follow in her footsteps?

(There is nothing imposible to a determined athlete and one who enjoys what he/she is doing. But if you are lazy and don’t have dedication to what he is doing, nothing will come out of it.)
.

Elma Muros-Posadas and her husband Noel George ‘Jojo’ Posadas are now no longer coaching at UE; after over a decade of service, they are now coaching with the University of the Philippines.