Elbren Neri will highlight the 3rd Leg of the Pinoyathletics Mindanao Track League in Butuan on December 4. The 27-year-old is the 2016 800 Meter ASEAN University Games Champion in Singapore. Neri has indicated his sole focus is the 800-meter event. As he aims for his second SEA Games having taken 7th in the 1500 Meters in the 2017 edition. Neri was out of the national team due to a hamstring injury back in 2019

The Butuan City meet marks the beginning of Neri’s campaign to qualify for the South East Asian Games. It will also serve as a dress rehearsal for the Ayala Philippines Athletics Championships in Baguio. He will represent Tangub City. Neri will be up against Benjie Duhac (Pinoyathletics Butuan Team) and Jumell Gonzales (Sto. Tomas NHS Track Team, Davao Del Norte) who have best times of 1:58 and 1:59 respectively. Duhac and Gonzales are both also teammates at the University Perpetual Help System Dalta.

After Butuan, Elbren Neri will proceed to the Ayala Philippine Athletics Championships in Baguio where he will run the 800 on December 16 where 8 athletes will vie for the title of the country’s fastest man.

Elbren Neri will be attempting to regain the national title he last won in 2016. When he was both the National Open and National Games Champion in the 800 Meters in the same year. 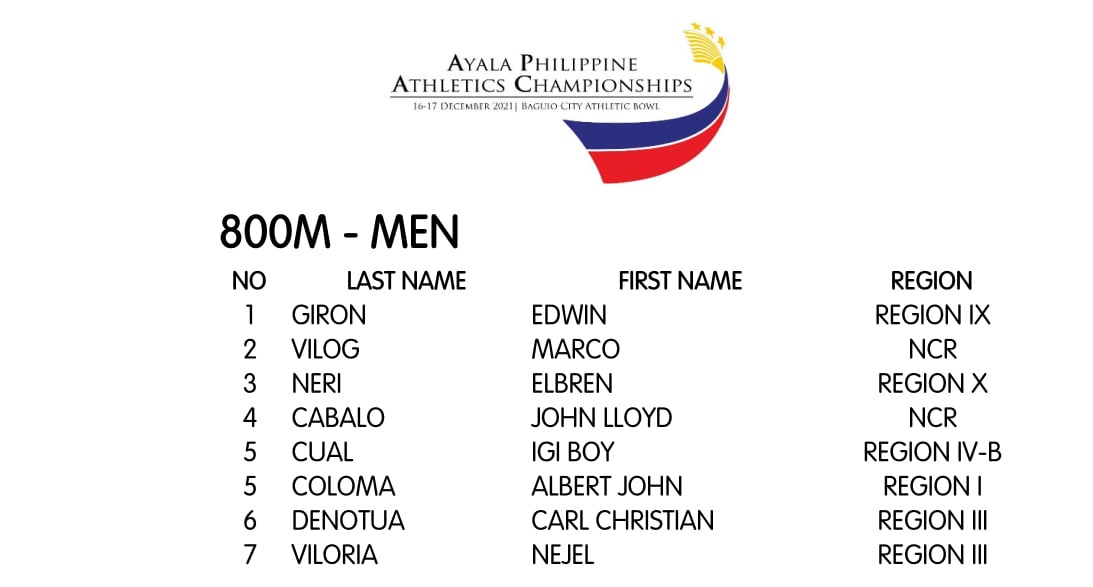 Another very interesting thing to note is that Fil-American Carter Lilly the Philippines Record Holder, SEA Games 800m Silver Medalist and 2019 National Champion not registered a performance for just under 2 years his last being February 7, 2020. And it’s unclear whether he will be making another SEA Games appearance at this stage.

The Vietnamese and Thais will have their National Championships in 2 weeks also. So far the best time in South East Asia for 800 Meters this year is 1:54.25 by Giang Van Dung of Vietnam set on April 22 at the Speedy Cup in Ho Chi Minh City, Vietnam.

Life after the National Team

Since then Elbren Neri has been a good family man with his wife Jessah Mae Fernandez and his young daughter. Jessah and Elbren were long-time teammates in high school at Tangub City and then both on the track and field team at the University of Santo Tomas. Jessah was a former UAAP Champion in Hammer and Discus Thrower. While Neri still holds the UAAP Records in 800 and 1500.

For the past 18 months, Elbren Neri has come to me for training advice and programs. And I have provided him coaching online. Neri is also a coach himself and coaches two very talented teenagers Teolou Papel, 16, and Onyamerkl Espinosa, 17 who will both also see action aswell in Butuan City in the Middle and Long Distance events. We would also like to take the time to thank Mayor Jennifer Tan of Tangub City for the cities support during the Pandemic.

All up both trips to Butuan and Baguio were not cheap with it with the latter event being the week before Christmas in peak season. That’s why we are extra appreciative of all our sponsors Hon. Governor Philip Tan of Misamis Occidental, Dr. Gap Legaspi, Atty. Migs Nograles of the PBA Party List, and Coach Cherry Cabiluna of Villanueva Team.