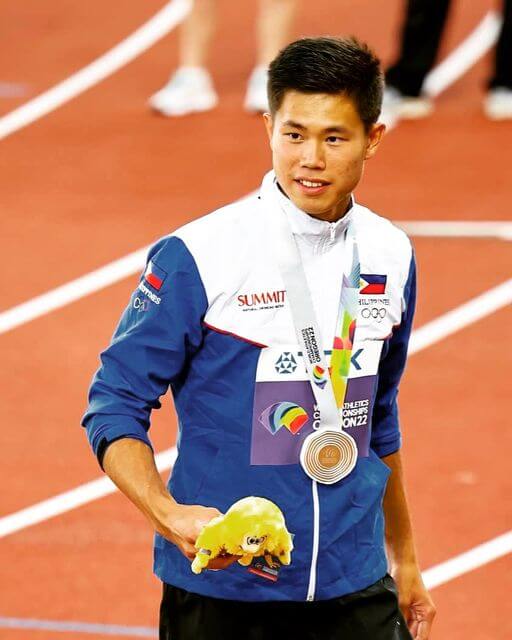 EJ Obiena makes it through to Olympic Final in Mens Pole Vault.

Ernest Obiena made it through to the Olympic Finals. It was nail-biting stuff as EJ missed the bar twice at 5.75m after clearing 5.50m and 5.65m on his first attempts. On his final do-or-die attempt at 5.75m, EJ put all fears to rest, sailing over the bar with what looked like a 6-meter jump.

The automatic qualification for the final was 5.80m with a cap of 12. However, 11 men cleared 5.75m, and all mutually conceded that all 14 of them (including 3 on 5.65m countback) had enough of the hot sticky heat; They would be calling it a day, packing up their poles, and going back to the village to rest for the final to rest up contemplating what needs to be done with three days rest before the Final on August 3 at 7.20 pm.

Among the finalists were world record holder Mondo Duplantis of Sweden, former world record holder Renaud Lavillenie of France after an earlier scare with two fails at 5.50m, and Olympic Champion Thiago Braz, and the 2 Americans KC Lightfoot and Christopher Nilsen among the top 14. But spare a thought for EJ Obiena of the Philippines, the 2019 World University Games, and the 2019 Asian Track and Field Champion, who is well within the mix for a medal here in Tokyo. 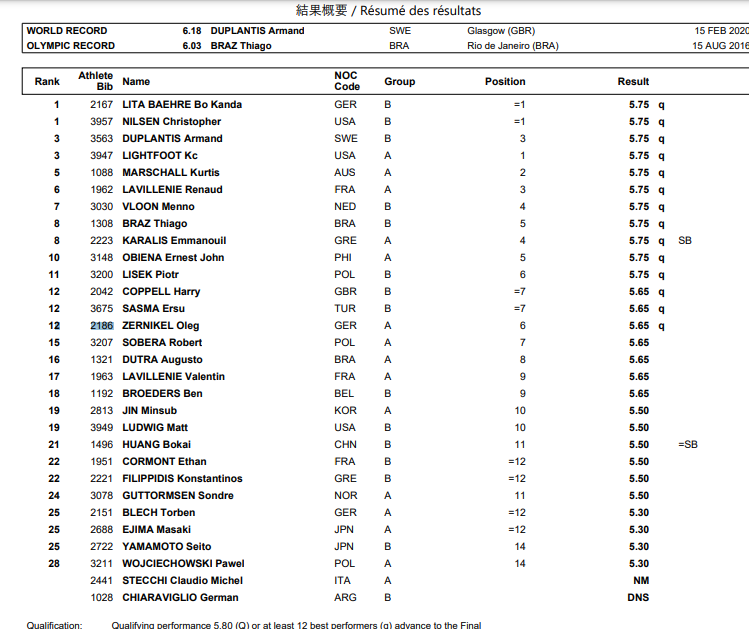 World #2 Sam Kendricks tested positive for COVID-19 before the games and was replaced by Matt Ludwig, who did not qualify through to the finals clearing 5.50m.

Full Results from Day 2 of the Athletics Here

Nilsen cleared 5.92m (3cm away from his PB and 2cm better than his winning jump at the recent US National Team Trials). However, despite coming out with silver, EJ didn’t come out empty-handed as he set a new Philippine and Southeast Asian outdoor record of 5.87m. Taking 1 cm off his record set on February 12 at the Orlen Cup (5.86m). Piotr Lisek, who was 4th at the last Olympic games, cleared 5.82m season best. At the same time, EJ’s training partner Thiago Braz of Brazil, the 2016 Olympic Champion, who EJ tied with last week at Leverkusen, was 4th also in 5.82m.

Before the Olympics, he will next see action at the Wanda Diamond League in Stockholm, Sweden, on July 4.

For the other 2, I would only know the time when I arrived in the area. 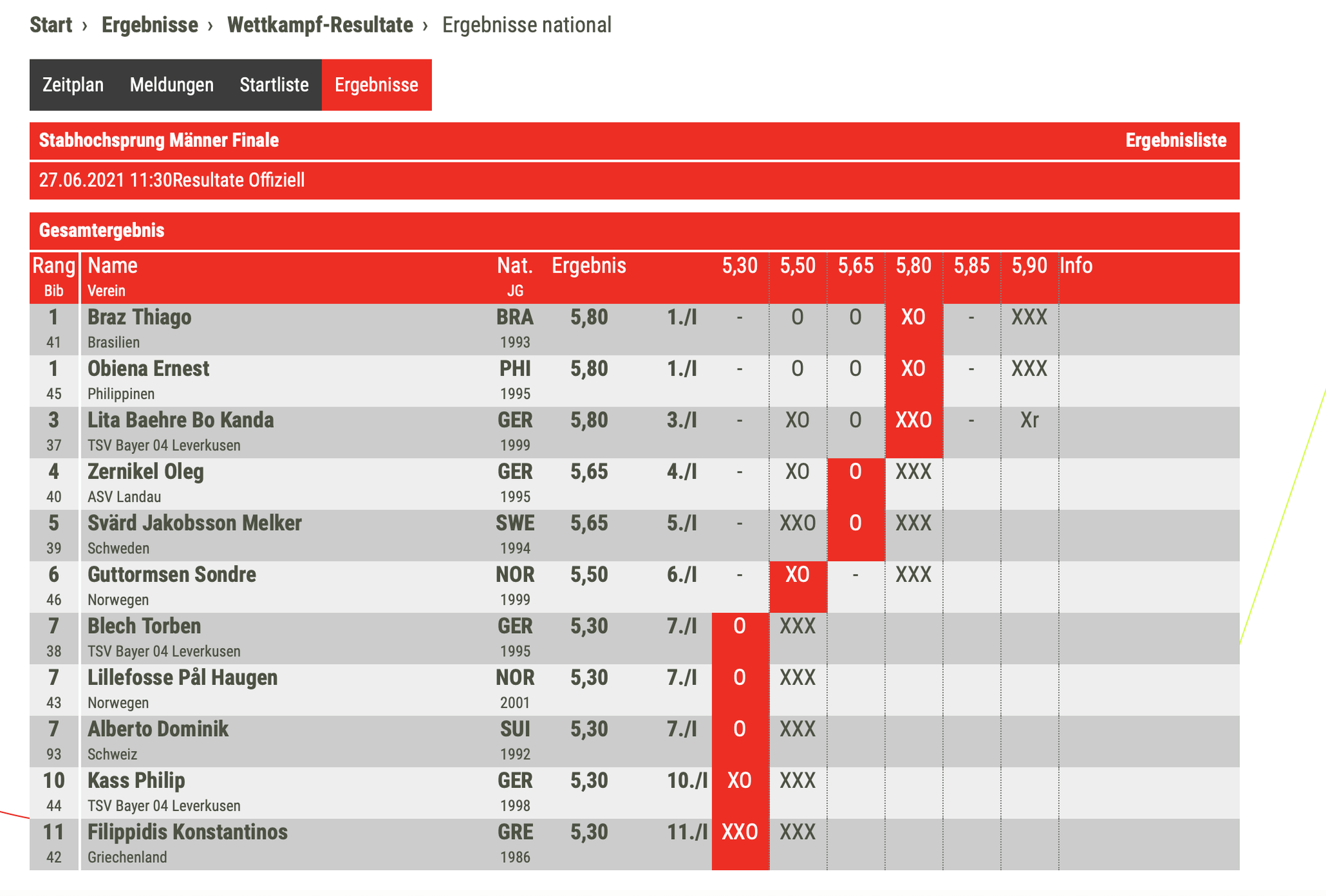 CONGRATULATIONS to our Tokyo Olympic-bound athlete ERNEST JOHN OBIENA to set a New National Outdoor Record in the Pole Vault of 5.85m again and win the Gold medal at the 2021 Jump Fly International Athletics Meet in Germany.

Ernest Obiena cleared his National Outdoor Record and Seasons Best of 5.85m in the 3rd attempt, surpassing his previous meet record of 5.81m.

Just 1cm shy of his 5.86m Indoor National Record and Personal best. With the Tokyo Olympics coming up in just over 6 weeks. 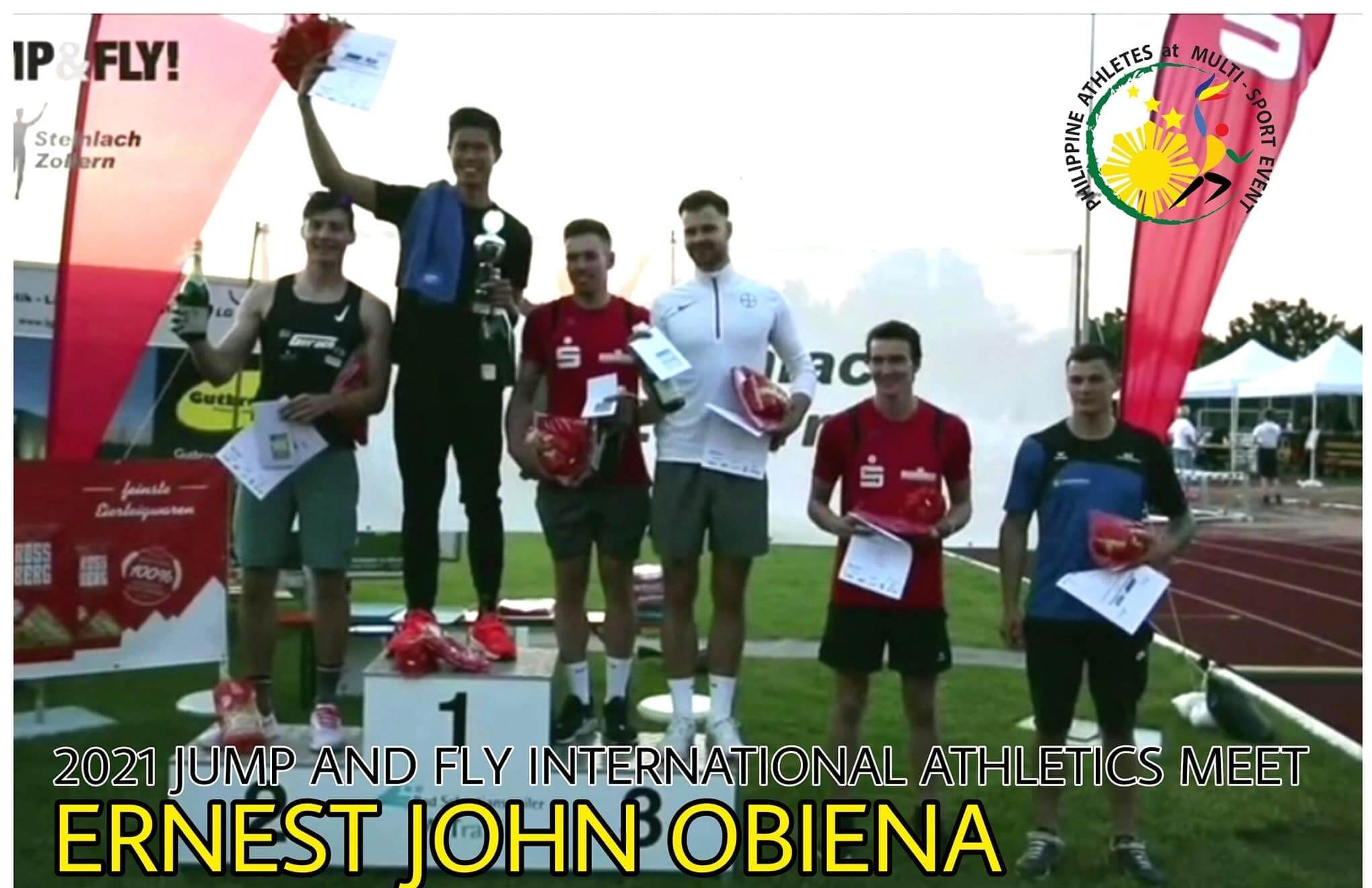 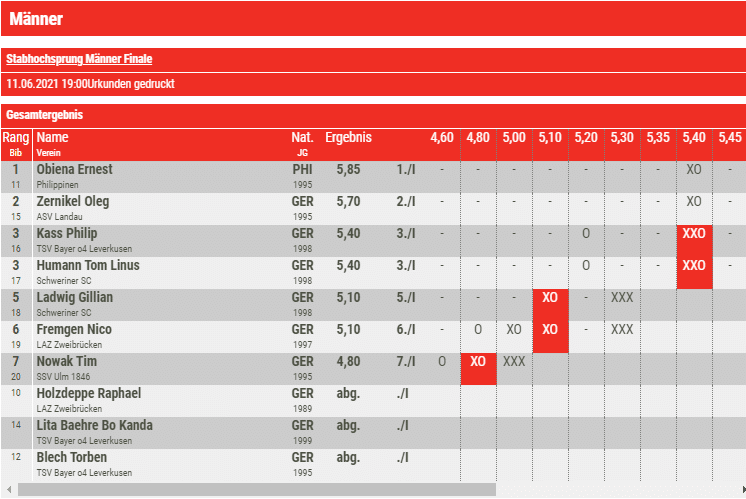 EJ Obiena (Philippines) had his first meet of 2021, winning the Men’s Pole Vault at the Goteborg Grand Prix Germany in 5.70m. EJ beat his training partner and 2016 Olympic Champion Thiago Braz (Brazil), who registered 5.65m, and Pal Haagen Lillefesse (Germany) 5.60m, who took 3rd on countback from Cole Walsh (USA) 5.60m. So far, EJ Obiena is the only Filipino to make the qualifying standard for the Olympic Games (5.86m) in Athletics, with the cut-off on June 29.

This can be described as a defining moment in both Philippines Sports and a turning point in his athletic career. 25-year-old Ernest John Obiena cleared 5.86m at the Orlen Cup in Lodz, Poland, on February 12, 2021.

EJ finished 2nd on countback to American Sam Kendricks, the 2017 & 2019 World Champion in the Pole Vault, and the Olympic Bronze medalist in 2016 in that event.

EJ is now only five centimeters away from the 5.92m Asian Record (indoors and outdoors) of Igor Potapovich of Kazakhstan in 1992 in Dijon, France.

EJ takes the wins in a sudden-death match in Germany.

Fresh from his 5.80m win at the ISATF Meet in Berlin, Germany, Ernest Obiena continued his Olympic journey at the PSD Bank Indoor Meeting in Dortmund, Germany.

The seven-man field was down to four at 5.65m with Obiena, Zernikel, Torben of Germany, and Cole Walsh of the USA. Walsh was eliminated, failing to clear 5.65m. Torben survived by the skin of his teeth cleaning 5.65m on his third attempt.

The bar was then supposed to be raised to 5.73m but. The 3 surviving Vaulters opted for the bar to be raised to 5.81m. This mark would have tied EJ’s National Record and Olympic standard, with the following height of 5.87m. Obiena, Zernikel, and Torben all failed three attempts at 5.81m.

And then lowered the bar back down to 5.73m to break the tie, with both Obiena and Zernikle failing. Finally, in the sudden death match to determine the winner, Obiena cleared 5.68m, and Zernikel failed at 5.68m.

EJ’s next competition will be in Calais, France, as part of Athletics’ world indoor tour for 2021.

Ernest John Obiena set a new Philippines Indoor Record at the ISTAF Indoor meet in Berlin, Germany. EJ leaped 5.80m to win the invitational 8 men’s Pole Vault. In the process, he broke his own National Indoor record that he set last week in Karlsruhe of 5.62m.

EJ won on countback ahead of Torben Blech of Germany, who took two attempts to clear 5.80m, whereas EJ had just taken 1 shot. Blech had finished runner-up to EJ at the World University Games in Napoli in 2019.

Both EJ and Blech had 3 failed attempts at 5.87m

The Meet Record was set in 2015 by Lavellenie of France with 6.02m. Lavellenie also jumped 6.02m last week to tie the ISATF Record.

EJ So far is the only Olympic Qualifier in Athletics for the Philippines.

The mint mark of EJ came at the World Indoor Tour on 29.01.21 in Karlsruhe, Germany. EJ Finished in fifth place.

He was behind the former world record and 2012 Olympic Champion Renaud Lavillenie (France), who registered a 5.95m effort. However, it was Laveillenie’s best performance since 2018.

Matt Ludwig, the US National Indoor Champion, was second in 5.80m.

Mondo Duplantis, who did not join, is still the top man for the Olympics with a 6.18m World Record.

So far, the 25-year-old Obiena is the only athlete to qualify for the Philippines in Athletics for the 2021 Tokyo Olympics, already having surpassed the 5.80m mark twice.

EJ is currently ranked #1 in Asia. The Other Asian Athlete to qualify for the Olympics is Min Sub of South Korea, which has leaped 5.80m.