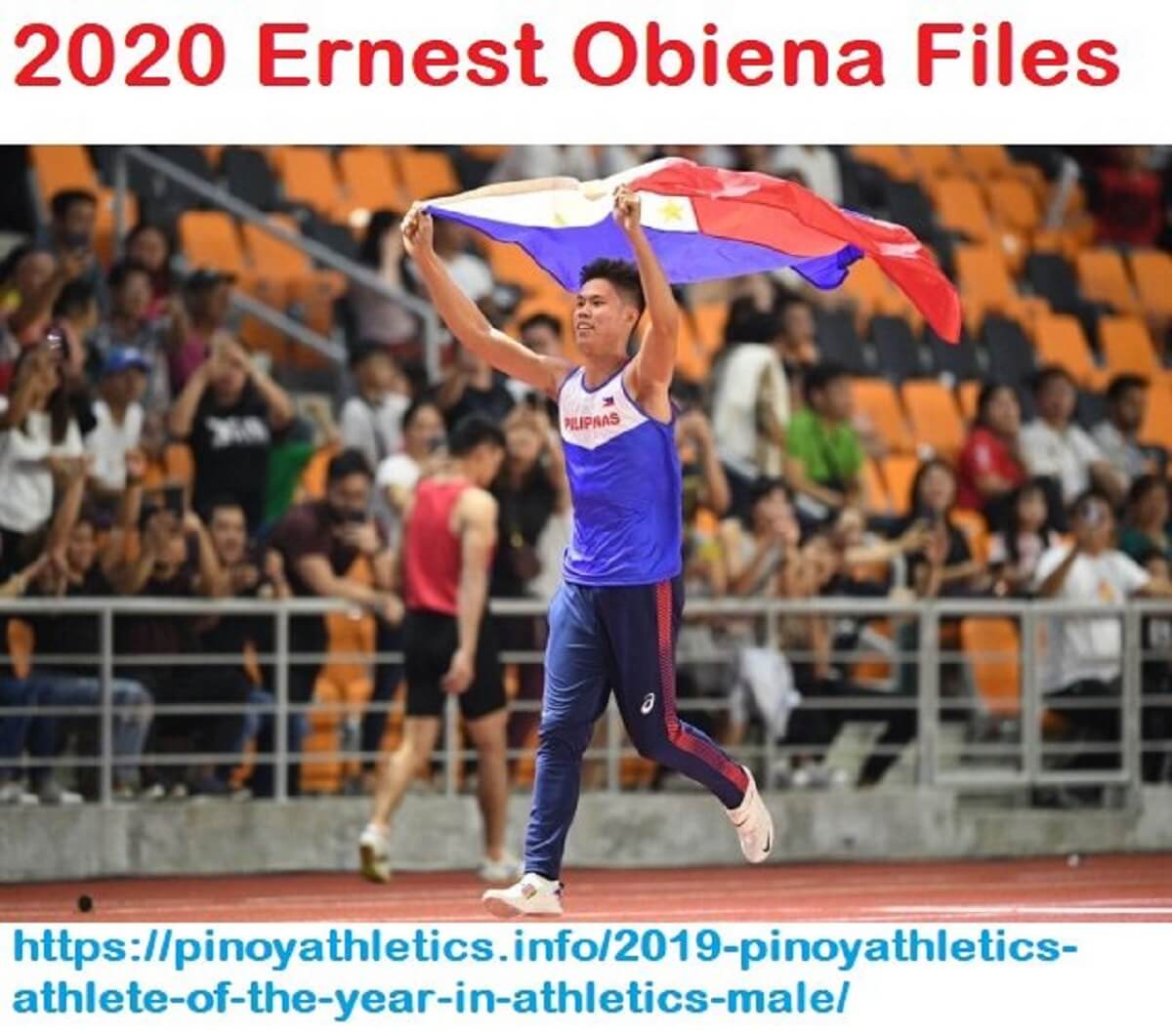 Ernest Obiena, for the third year in a row, is the Male Athlete of the Year for Pinoyathletics in 2020.

Ernest Obiena is still the only qualifier for Philippines Athletics to the 2021 Tokyo Olympics.

While no major championships were held in 2020, Ernest Obiena became the first Filipino athlete to compete at the Diamond League. He took a bronze medal at Monaco and Rome, where he was only 1 cm off his Personal best.

Ernest Obiena rubbed shoulders with some of the world’s best athletes, including Mondo Duplantis.

Fresh from his win in Ostrava. Ernest Obiena will next compete in Poznan, Poland.  Tonight 11 September 2020, at the Grand Prix.

This time he will be up against World Record Holder Mondo Duplantis of Sweden and world champion Sam Kendricks of the United States, Olympic Champion and training partner Thiago Braz of Brazil, and world indoor champion Pawel Wojciechowski of Poland.

The Men’s Pole Vault at Poznan will start at 4 Pm in Poland, 10 pm in the Philippines. 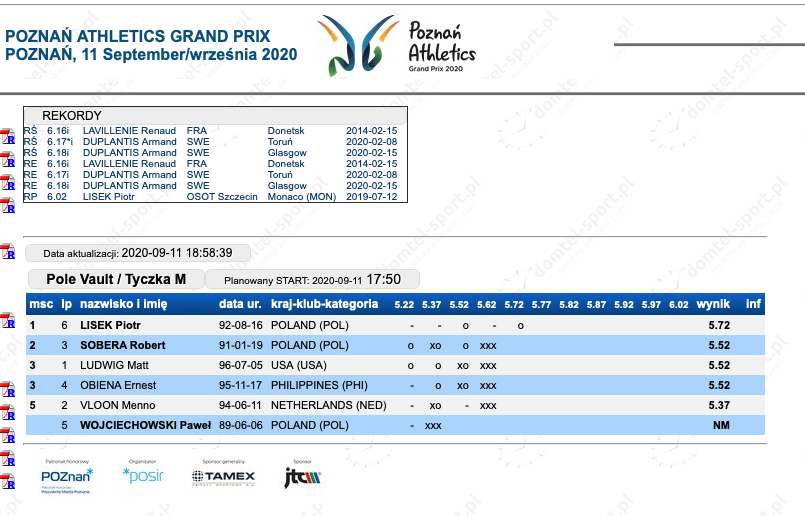 Despite the disappointments of a rained-out Golden Roof Challenge at Innsbruck, Austria. It was straight on the road for Ernest Obiena and his hard-working Ukrainian Coach Vitaliy Petrov.

This time it was to the Czech Republic for the Diamond League.

The win marked the first Time a Filipino athlete has won a Grand Prix at this level in Athletics.

Ernest Obiena, last month became the first athlete to ever place in the Diamond League when he captured third place in Monaco.

The win for Ernest Obiena with a 5.74m was a season-best improvement on Monaco’s 5.70m.

And just outside his 5.81m PB set last year in a street meet.

If that wasn’t enough, what about Sam Kendricks, the 2019 World Champion who was third in 5.64m, or Thiago Braz of Brazil, the Olympic Champion and Ernest Obiena’s training partner, 4th in 5.64m.

World leader Mondo Duplantis was only missing from the meet, Won the Stockholm, Sweden edition in 6.07m.

Quite an exciting clash to come up with Ernest Obiena to take on the world record holder, perhaps at the next Diamond League meet in Rome on September 17. 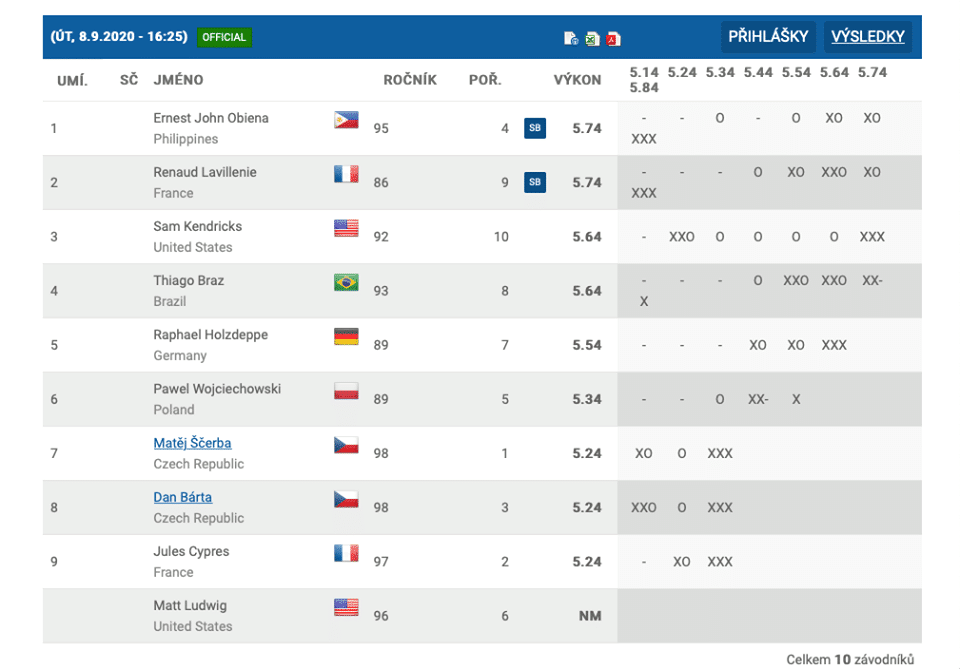 Who is the Worlds Finest Pole Vaulter Live Stream 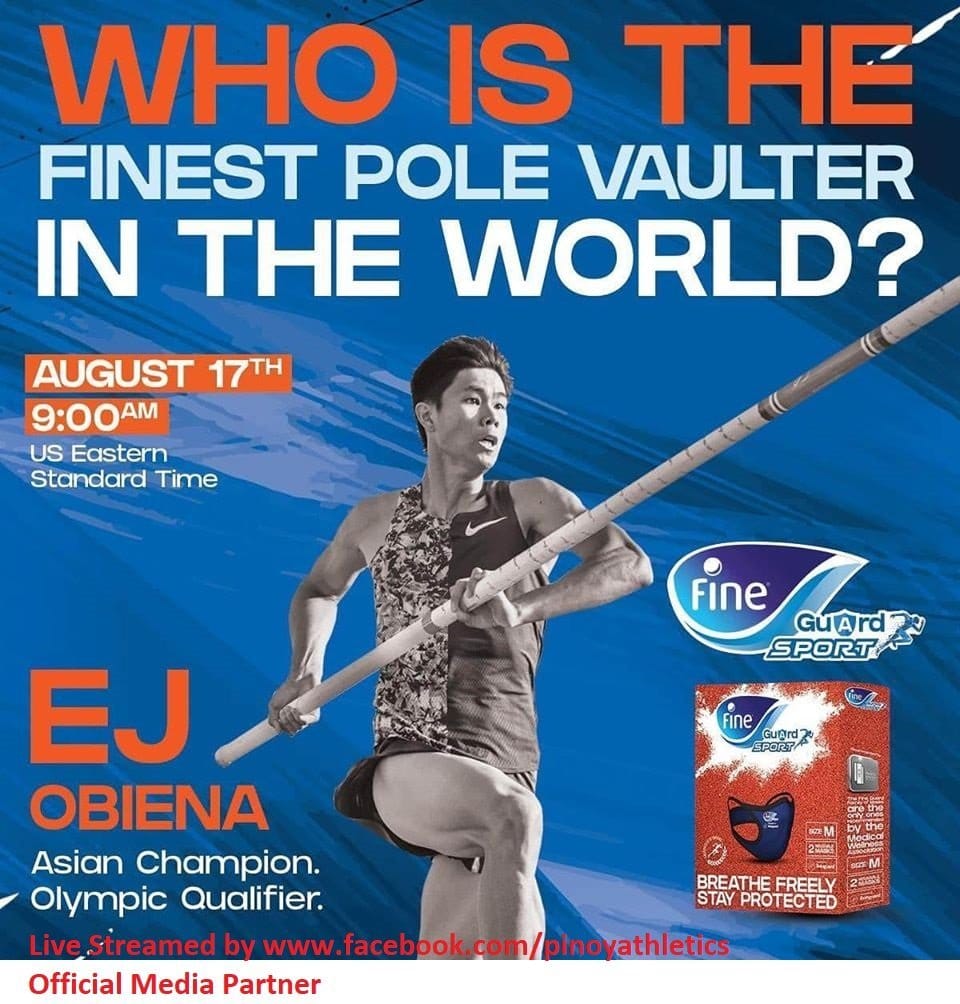 And held it on the 17th of August.

Each participant won a significant cash prize, which would go a long way toward their training. Braz also set a season-best of 5.70m.

But the surprise 2016 Olympic Champion was still a while away from his 6.03m Personal best. “We wanted to help the guys out with Training. We will are be looking at doing a women’s event for this and holding this event for Men again next year. Its all about connections if we had 4-mile runners willing to do this we would definitely consider putting it on” said Jim Lafferty in an interview with Pinoyathletics. 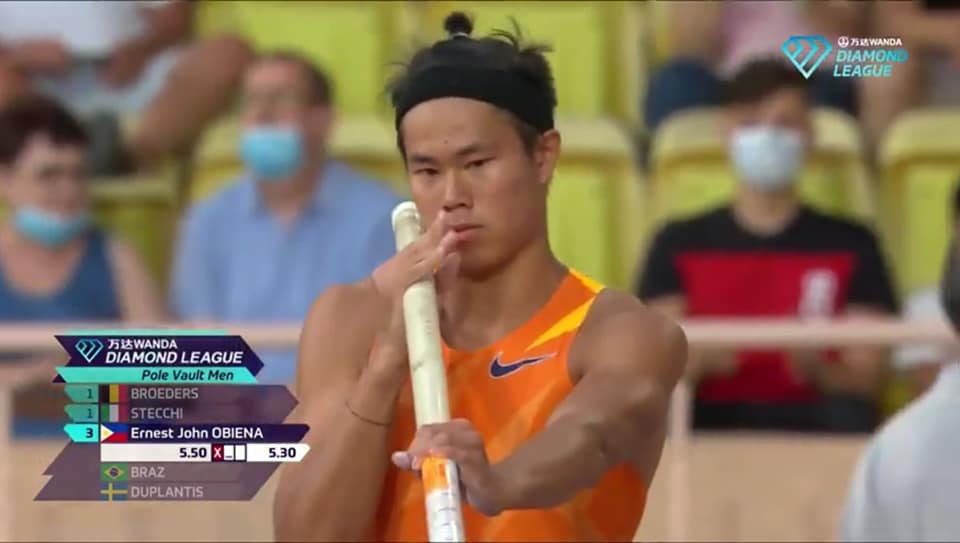 Obiena finished third behind World Record Holder Armand Duplantis of Sweden, who dominated the meet with the first 6.00m leap of 2020.

Ben Broeders, who took Bronze behind  Ernest Obiena at the 2019  World University Games, cleared 5.70m on his first attempt took second ahead of EJ Obiena.

EJ cleared 5.70m on his second attempt. He finished 3rd of 6 competitors and ahead of training partner and Olympic Champion Thiago Braz, who wound up 5th in 5.50m. 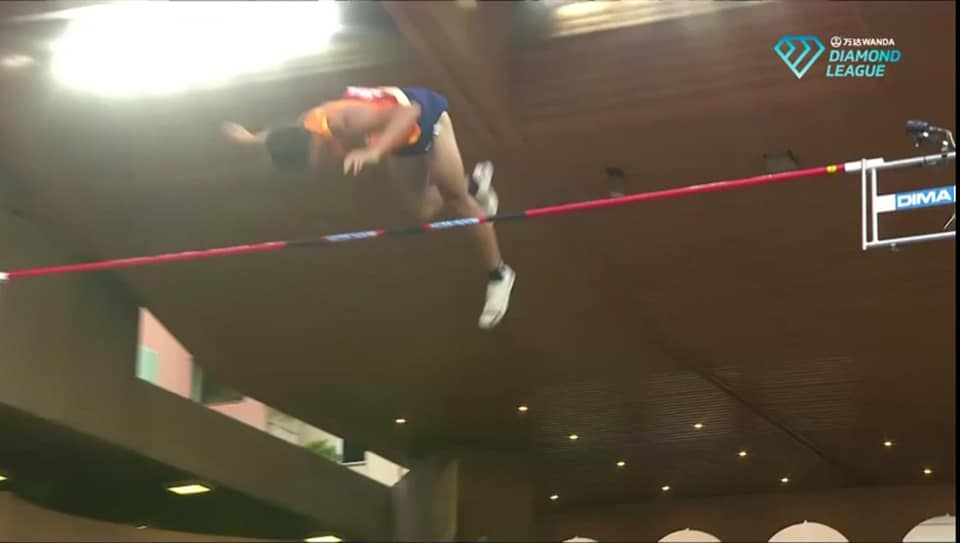 Ernest Obiena, who had competed on the Diamond League circuit last year, is coached by Ukrainian coach Vitaliy Petrov. The Coach of Sergei Bubka. Bubka, who lives in Monaco these days, was there to reunite with Petrov and Obiena. 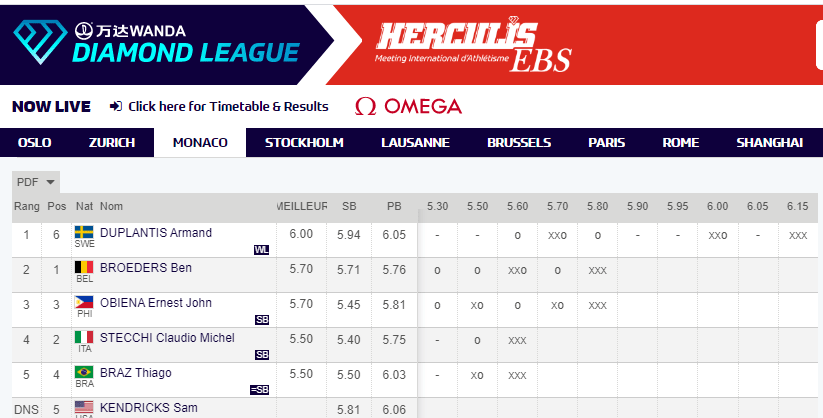 Ernest Obiena had his first jump of 2020 with a 5.45m Leap at the 13th Trievneto International Meeting in Trieste, Italy, a 5.45m jump.

Ernest Obiena and Thiago Braz are coached by the legendary Vitaly Petrov (who mentored Sergey Bubka).

EJ Obiena is the only Filipino Track and Field athlete so far to qualify for the 2021 Tokyo Olympics with a 5.81m leap; he is one of 21 athletes who have qualified outright for 32 slots.

Obiena’s next meet will be the Diamond League at Monaco on August 14.

Pinoyathletics Exclusive Media Partner on August 17 for Who is the best Vaulter online event? Livestreamed on

“Who is the FINEest Pole Vaulter in the World” Competition

Our Track Talk Tuesday had 28 Participants.
We asked Ernest John Obiena. About what competitions he would be joining despite the COVID delays.

“I would like to join all of the Diamond League meets as all of the top guys are on the circuit. And that’s who I need to compete against to get better” -Ernest Obiena.

1. Experience as a world-class Filipino Pole Vault Athlete.
2. Notes on being an athlete in a global environment with a local perspective.

Also, Ernest John Obiena is the first Filipino that has been given a scholarship from the International Athletic Association Federation (IAAF).

In early 2014, for three months, EJ Obiena, with his father, was allowed to train under coach Vitaly Petrov in Formia, Italy.

First of all, Vitaly had previously coached Sergey Bubka. As a result, on July 20, 2014, at the PATAFA weekly relays held at the PhilSports Football and Athletics Stadium.

The previous record was 5.0 meters by Edward Lasquete at the 1992 Summer Olympics in Barcelona, Spain.

Consequently, and also broke the junior national record since Obiena at that time is 18 years old. At the same time, the previous description was 4.31, set three years ago.

Hence by the time Obiena became ineligible for the national junior record, the record was 5.21, which Obiena set himself.

Therefore in the 2015 Southeast Asian Games, Obiena won a silver medal with a leap of 5.25 meters, his personal record.

While having problems with a broken pole.

The Big Highlight came through when Obiena leaped 5.50m to capture the Philippines’ bronze medal at the Asian Championships.

The first medal to ever be won for the Philippines in the Pole Vault at the Asian level. At Leuvesken, Germany, he increased the Filipino record again to 5.61m.

This mark was just 9cm off the Olympic 5.70m qualifying mark.

I am a filipino vaulter who has a dream to become a world class athlete. I am currently the National Indoor record holder and i have equalled the highest vault of a filipino which is 5.00 meters. I am aiming to qualify and join the World Juniors Championship this coming July in Eugene, Oregon

Hi! I am Ernest John Obiena, 18 years old. I am from Manila, Philippines. My Goal is to Qualify for the upcoming World Juniors Championship.

While under my father’s supervision, I cleared 5m in Nan-tou International Pole Vault Championship this year.

Also, I placed 7th out of 26 competitors, which came from Taiwan, Malaysia, the USA, China, Japan, Australia, and Thailand.

While my goal is to clear 5.05m officially before July 2014 to be the first homegrown Filipino to qualify and represent our country in the World Juniors Championship in Eugene, Oregon, USA.

We usually send “token athletes” in the World Junior Championship because we have not hit the qualifying standard yet.

Because my Personal Record as of now is 5.00m, which is just 5cm (2”) of the standard set by the World Juniors Championship committee.

Also, I had been clearing this height at times during training.

Because I have to do it officially in an IAAF recognized competition and clear 5.05 officially.

Hence From June 2013 up to the present, the only Track Oval with a pole vault facility (Pasig, Ultra) in metro manila is not available for use.

Due to ongoing renovations.

Because of this, Pole Vaulting was able to continue and progress.

Furthermore, on January 12, 2014, I met the World Record Holder at my event, Mr. Sergey Bubka.

Mr. Bubka said I should apply for the IAAF’s Olympic B project for athletes like me.

Also, he encouraged my coach/father to learn more and continue my training after the program in Italy.

Hence with God’s blessing, I cleared 5m; I became eligible for the program and was offered a 90 days scholarship to train in Formia, Italy.

While unfortunately, my coach/father has to shoulder all his expenses in joining me.

Consequently, the IAAF program would be a big help for us to prepare for the upcoming World Juniors Championship.

And we can apply the additional knowledge we learned and help improve Pole Vaulting furthermore in our country.

I am also humbly asking for your generosity by helping us save money for my father/coach’s Plane Ticket, Accommodation, Food, and Transpo. Consequently, The total amount (7300) will cover the 90-day stay in Formia, Italy, under Vitaly Petrov, the coach of Mr. Sergey Bubka.

This opportunity is infrequent, and I am most grateful for it and picked me to join this program. Also, this would help me accomplish my goal to represent my country in world-class competitions.

Thank you very much for reading.

Pole vaulter EJ Obiena, one of the Filipino athletes who already qualified for the 2020 Tokyo Olympics.

Is on track with his training in Italy despite the continuing threat of the coronavirus pandemic.

Fortunately, Obiena has located hundreds of miles away from the badly hit northern Italy.

‘Nerve-wracking’: No Tokyo 2020 Olympics build-up yet for EJ Obiena

Tokyo 2020 Olympics-bound Ernest Obiena hasn’t joined a major competition yet this year due to the cancellation of several sports events. 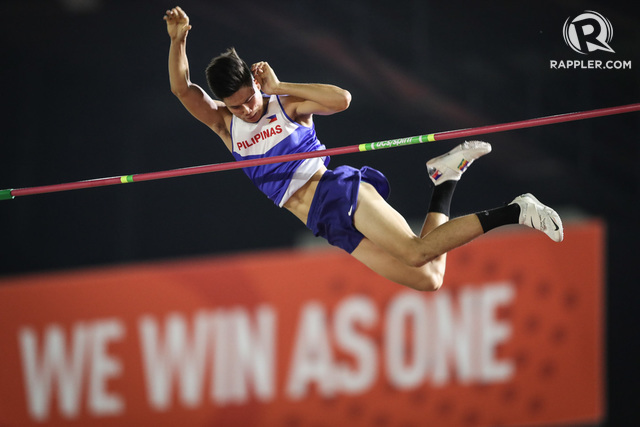 NO TOURNEYS. Ernest Obiena waits for the start of his pole vaulting season as Europe is put on lockdown. Photo by Josh Albelda/Rappler

“It’s a bit nerve-wracking [since I] haven’t been able to compete, but we have contingency plans if things do go south,” Obiena told Rappler.

The dream that matters most for Ernest Obiena

“My target in Tokyo is gold. Not impossible, but very difficult,’’. Obiena told the Inquirer during a break in training with renowned Ukranian coach Vitaly Petrov in Formia, Italy.

Dreamed of victory in the 2019 Asian Athletics Championship in Doha, Qatar.

Shortly after, another gold came at the 2019 Summer Universiade in Naples, Italy, with a new national record of 5.76 meters.

Just two months after the Universiade, Obiena secured the Tokyo berth by clearing 5.81 meters and surpassing the qualifying standard of 5.80 by a hair.

So to speak, in a tournament in Chiara, Italy, last Sept. 3. 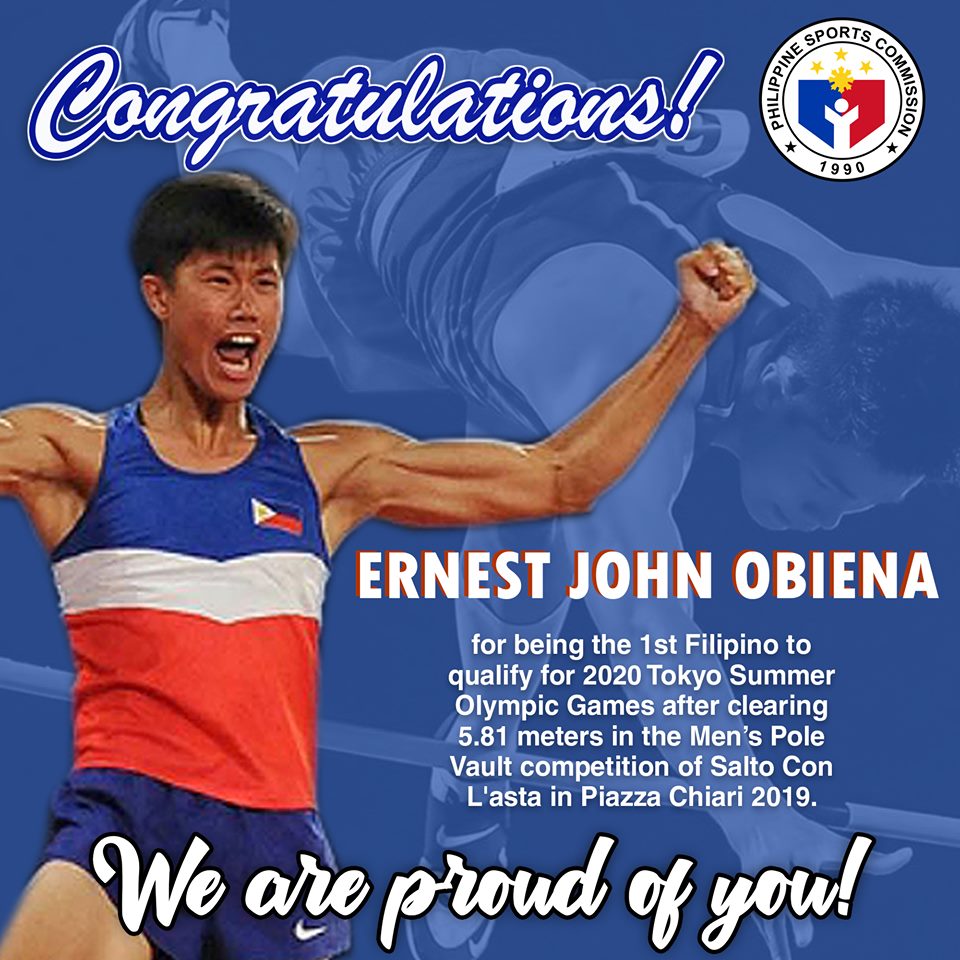 Ernest John Obiena became the First Filipino to qualify for the 2020 Olympic Games. EJ leaped 5.81m at a meet at Chiari, Italy.

In doing so, Ernest Obiena beat the challenging 5.80m qualifying mark for the 2020 Tokyo Olympics.

EJ had won the Asian Games in 5.76m, which qualified him for the World Championships, staged from 27 September to 6 October in Doha, Qatar.

The deadline for the 2019 World Championships is September 6.

And Ernest Obiena is the sole qualifier, with nobody else meeting the world championships’ qualification standards.

EJ’s mark of 5.81m was also a SEA Record and National Record.

In 2019 Ernest Obiena went well ahead of his nearest Thai Rival, the 2018 Asian Games Bronze medalist Patasphong Amsam-Ang who has cleared 5.60m so far this year.

Based on the IAAF Rankings (best performance), EJ is ranked 10th in the world (not the IAAF Top Lists based on 3-5 accounts that Pinoyathletics will totally disregard)