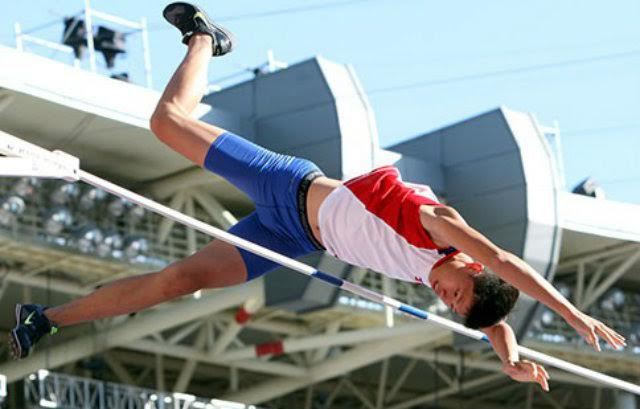 In recent form, the top 4 guys, 2 from China, 1 from Korea, and Japan, have recently been consistently over 5.60.

PA Predict: Top 5, slight possibility of bronze if in shape to break his PB.

Ernest EJ Obiena admits. His 5.51 meter leap at the International Stabboc Meet in Germany is a big step to winning the gold medal at the Asian Games.

While in a conversation with RP2, EJ related.

“I’m quite happy with 5.51, it’s a step forward, a small reward for my team’s effort from the surgeon, PT, sir Jimthis is a big step towards winning the gold at Asiad.

Especially relevant is his target is to jump 5.75 meters in his remaining stints in Europe.

In conclusion, that would secure EJ of a gold medal in the Indonesia Asian Games.

Therefore Obiena resumes training under coach Vitaly Petrov in Italy, where they shall reach his 18-step approach.

‘Now, I’m 16 steps, 2 steps from my regular approach. My knee is not strong as it was before , need to adjust to my speed , can’t have a fast run-up which can be converted into the height of my take off, we must try to mix and match everything.

Despite several adjustments, he needs to make…. one thing is sure, EJ is on the right track for the Asian Games set for August 25-30.

EJ Obiena and his mother Jeanette talked to Radyo Pilipinas2(Dzsr SportsRadio)918khz am band.

Ernest Obiena improved his season’s best to 5.51m, with his third ever-best jump. Hence the 22-year-old finished 7th in the Himmelssturmer-Cup in Germany over the weekend.

While his next tournament is the JUMP & FLY – 8. Internationales BAXTER Leichtathletikmeeting in Germany on June 30.  In preparation for the Asian Games in August.

While Raphael Holzdeppe of Germany won the meet in 5.81m, the 2013 World Champion Piotr Lisek of Poland, the 2017 World Silver medalist, was second in 5.71m.

At the meet third place, a couple of Chinese athletes went to Huang Bokai, who leaped 5.61m, bronze medalist at the 2015 Asian Champs. Yao Jie was 5th in 5.51m,

Most noteworthy, the last Asian Games in 2014 was won 5.55m. So he is looking like a severe medal contender for Asian Games.

Yao and Huang of China have both leaped 5.61m.

While Coming back from a horrific leg injury sustained just a day before leaving for the 2017 SEA Games. Ernest John Obiena,  22.

The southeast Asian Record Holder and 2017 Bronze medalist in the Pole Vault.

Bounced back with a 5.40m season’s best in Ostrava at the Golden  Spike World Challenge meet.

Obiena beat one athlete and placed 10th on countback with a 5.40m effort.

The starting height here was 5.20m, unlike in Rome at the Diamond League, where Obiena has to start at 5.36m.

Consequently, Obiena opened his season in March with 4.90m at the Taipei Pole Vault meet.

Hence he was initially selected with 7 other athletes for the Asian Games. As his best of

While Obiena narrowly missed out on selection in the 2014 Asian Games, he was not accredited on time, so this will be his first appearance at Asian Games.

Pawel Wojciechowski of Poland, the 2011 World Champion, won the event in 5.75m from

Sam Kendricks, the 2017 World Champion, and Scott Houston of the USA both had 5.60m.

EJ was the only Asian athlete who entered. 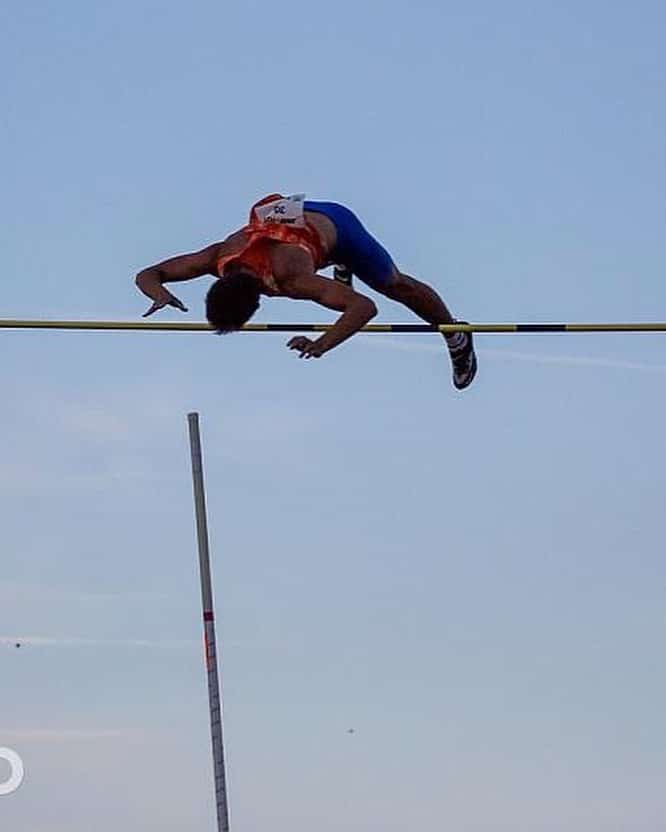 Unfortunately, Ernest Obiena could not clear the starting 5.36m height at the Diamond League, with 3 attempts.

Wishing him better luck for his next outing. 4.90m to 5.36m is quite a giant leap in a short period of time. 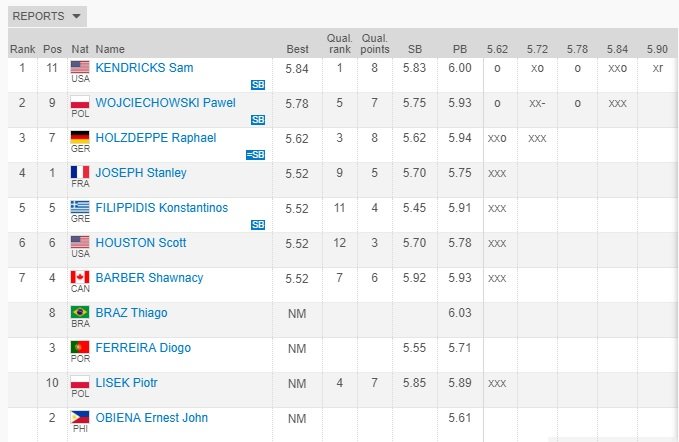 Most noteworthy is that EJ is the first  Filipino invited to join the prestigious IAAF  Diamond League in Rome, The Pietro Mennea Memorial meet tomorrow.

While the Philippines, other top athletes, Eric Cray, participated in the World Challenge series. Also, Obiena boosts a Personal best of 5.61m from Leverkusen last July. 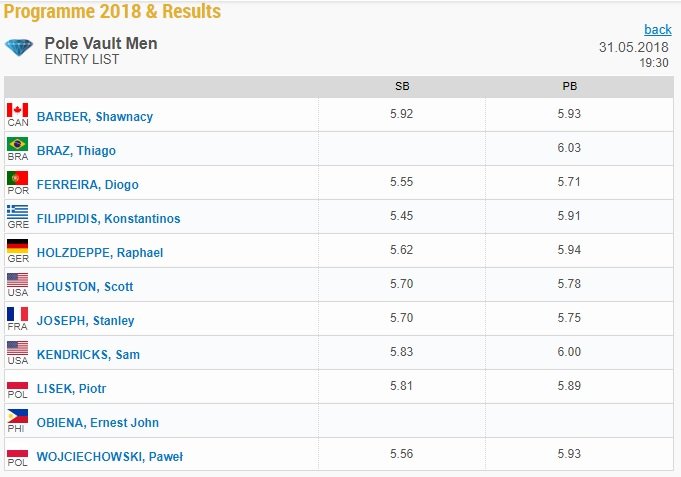 Unfortunately, an injury in training a few days before the SEA Games sidelined EJ from winning the much-coveted gold.

Hence, after many rehab months, EJ opened with 4.90m in Nantou at the Taipei Pole Vault indoor meet. Before heading back to Formia in Italy to train.

While In 2018, Phassaphong Amsam-Ang of Thailand, the SEA Games silver medallist, leads the  2018 SEA Rankings in Pole Vault.

Ronnie Baker, who beat World Indoor 60m champion and World silver medallist Christian Coleman will line up against him again in the 100 Meters.

Ernest Obiena opened his first comp back off injury with a 4.90m.  At the Taipei Indoor Pole Vault, meet at Nantou.

“Good to get through injury free.

But I would have liked to have jumped better.

I was surprised my speed was still there but I had difficulty controlling the pole. I will get better.” said the Asian Bronze medalist.

Who is preparing for Asian Games later this year.

After being sidelined with an injury a day before the 2017 SEA Games, Asian Bronze Medallist in the Pole Vault Ernest John Obiena will be returning to the competition at the Taipei Open on March 21.

Obiena leading up to the SEA Games improved his southeast Asian Record to 5.61m in Germany.

He was looking to improve his 2015 SEA Games Silver and give its first Gold in the Pole Vault since Edward Lasquete in 1995.

But an unfortunate leg injury in training sidelined him from getting that gold.

Since then, Ernest has been working on his rehab via strength coach and athletic patron James Michael Lafferty.

The 22-year-old EJ, a student at the University of Santo Tomas, had to skip the UAAP.

As he was not quite ready to compete at that stage.

In the meantime, he has been clearing 5.20 up in training.

Meanwhile, one of his two Thai rivals, Amsam-Ang, the SEA Games Silver medallist, has cleared 5.31m in Thailand.

This, however, does not bother EJ too much, as he is now thinking longer term.

Eyeing a medal at the Asian Games is the next step in his progress.

Selection is a tricky process, having missed the SEA Games.

Where Gold and Silver were secured, however, EJ, before his injury, had already surpassed the Gold Mark of Asian Games, which is 5.61m.

He also had a bronze at Asian Champs, which would class as a top finish in a major international meet during 2017.

If we are to go off third criteria, of being subject to fitness 4th place in the Asian Games, the task force is 5.45m.

Which is well within his capability.

So on all 3 counts, EJ is very much qualified for the Asian Games.

And should give the support he needs to him so he can win a medal.

*Since this was published, E.J has increased the Philippines record to 5.61m

On the Mend – The Remarkable recovery of Ernest Obiena

Good to see the remarkable recovery of Ernest Obiena back from a terrible injury before the 2017 SEA Games in August.

Which deprived him of the SEA Games Gold.

EJ Ernest Obiena is the national champion and record holder in Pole Vault.

In late August, just before the Southeast Asia (SEA) Games in which he was a virtual Sure Gold Medal, he brutally tore his Anterior Cruciate Ligament in his knee in a freak accident, landing off balance on the pit.

ACL tears used to be career enders until reconstructive surgery.

It’s still not a sure thing. No national track athlete has ever come back.

With EJ’s incredible work ethic and discipline, we have progressed steadily over the past 4 months, logging 3-4 sessions per week, including yoga and visualization exercises.

EJ’s strength is at an all-time high in key lifts like Bench Press with +20% gains.

And importantly, he is back now all the way, as today’s bounding drills demonstrate.

Can you believe this is someone who underwent complete reconstructive surgery just 4 months ago?

Look out for this young star in the Summer 2018 Asian Games and 2020 Olympic Games in Tokyo.

Coach Carol Lafferty and I are both so proud of you, EJ! 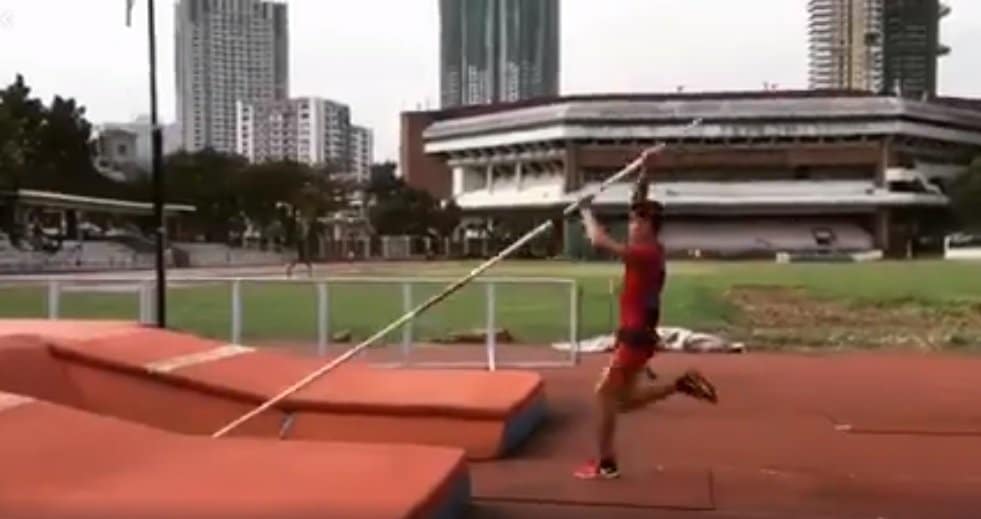 To everyone who has been following my recovery, I am very thankful for your support and encouragement.

I would like to let you know that I am starting to jump and feel like myself again.

I would like to let you know that I would not participate in the upcoming UAAP on February 7 in Ultra, Pasig.

I wasn’t given medical clearance to compete for many reasons but, most importantly, the recovery period.

4.5 months post-operation, competing might be the worst thing to do while I am undergoing rehab.

I am distraught not to be able to compete and contribute to the team.

Soon the time would be fitting to see what I could do.

I hope everyone would still watch and support our local athlete this UAAP.

Thank you, and have a good day!
#recovery#polevault#uaap

Ernest Obiena then and now

Ernest Obiena goes into the SEA Games with much more experience than he had 2 years ago.

Obiena comes back with a 5.61m SEA Record and Asian Bronze medal.

He is an overwhelming favorite for the gold in Malaysia, with his nearest rival 5.40m.

Unfortunately, EJ Obiena was sidelined by an unforeseen injury in training leading up to SEA Games was unable to participate. Pinoyathletics wishes him and his team all the best for a speedy recovery for his attempt to win the Gold at the 2018 Asian Games.