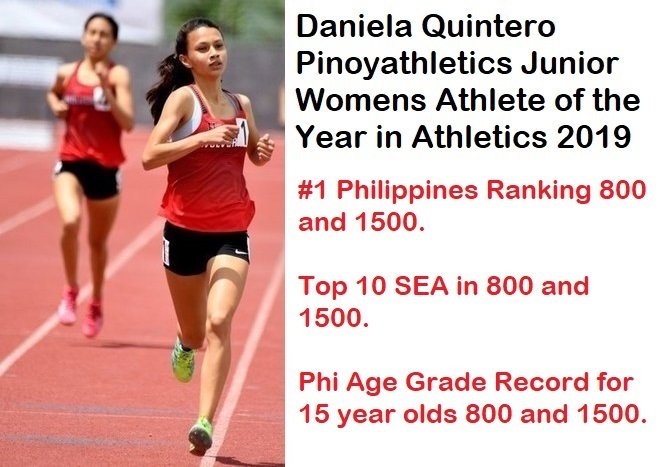 Pinoyathletics has named Athlete Daniela Quintero as the Junior Female Athlete in Athletics of the Year 2019.

After announcements of Ernest Obiena as back to back men’s winner and Alhyran Labita as Junior Men’s winner.

Quintero has a better Personal best than all the current women’s 800m and 1500m runners including the ones in the national team/training pool.

Pinoyathletics will watch with interest Daniela’s progression in 2020 as she will start racing in a few months after a 7-second improvement last year. Some of the relative targets seem very possible.

Niala set a new Palaro Record in the 200m breaking the record of controversial Nancy Navalta and passing the 100m palaro record but with wind assistance.

Natalia Quintero also ranked very highly like her sister in the same 800 and 1500 events finishing #2 and #3 in the Phi Senior ranking lists.

Junior Women’s Athlete of the Year

Below is a previous article on Daniela Quintero

Not only is the time faster than All Filipino athletes this year by 4-5 seconds. It is also better than the personal best time of any local athlete still active.

It is the fastest time since 2016 when another FIl-Heritage athlete Jessica Lyn Barnard reset the Philippine Record with a 2:06.75 clocking.

The Time Ranks Daniela 8th on the Phi All-Time List for 800m.

The time ranks her #3 on the Phi Junior All-Time List, the JR Record is held by Serenata Saluan set at the 2010 CHED Games.

Her mark is a new Age Grade Record for 15-year-olds also breaking the 4:44.4 mark set by Jieann Calis at the 2014 Palaro in Laguna.

It ranks her #5 in South East Asia again the only Filipino athlete ranked in the Top 10.

It places her #7 All-Time in the Phi Ranking Lists and #4 on Phi Junior All-Time Lists. The Junior Record of Marietta T. Magno of 4:35.70 has stood 34 years.

And Yes she does have a Filipino passport I have been sent a copy and will be advising her mother to forward a copy onto the PATAFA. As her and her sister Natalia, 16 are both interested in joining the 2019 SEA Games in New Clark, Philippines.

The Quintero sisters first contacted Mr. Airnel Abarra has they kindly donated a lot of shoes to the Davao Sports Program.

For a complete list of all Athletes from the Philippines that have passed the bronze mark.