How old is Mboma and Masilingi?

Athlete Christine Mboma was born in Namibia on May 22, 2003. At the 2020 Tokyo Olympics, she took home a silver medal in the 200 meters at the age of 18. A sprinter from Namibia named Beatrice Masilingi was born on April 10, 2003. At the 2020 Tokyo Olympics, she competed in the women’s 200-meter race and finished sixth at the age of 18. Christine Mboma, a fellow Namibian sprinter who won the silver medal, and both advanced to the final. Masilingi took home silver in the 2021 World U20 Championships in the 100 and 200 meters.

Christine Mboma will miss World Championships due to an injury

Mboma pulled up clutching her thigh on May 7 while competing in the Kip Keino Classic in Kenya. She ran the 200 meters in 21.87 seconds, which is the third-fastest time of 2022, at the Gaborone International Meet in Botswana just one week earlier. Mboma’s medical staff had initially anticipated that she would be fit to compete at the Commonwealth Games and World Championships, but things have changed.

“There’s a reason why the injury occurred and that is because a growth plate in her left hip that they picked up wasn’t developed fully and that needs to be sorted out,” Mboma’s coach, Henk Botha shared. While the injury is certainly a setback, Botha went on to say, “The good news is that the medical staff say if they fix the hip, she can be even faster. I am excited and happy that we can get back to training and she can just be the wonderful Christine that she is on the track, running and enjoying life.”

Mboma is an 18-year-old athlete from Namibia that hitting the track in 200m on fire this season. She already clinches a silver medal in the recent Olympics in Tokyo with a time of 21.81, a new World Junior Record (U20). And after a week, she competed in the World Junior U20 championship at Kenya Nairobi, where he gets 21.84, a new Championship record for a gold medal.

And two days after, she and her Namibia relay team clinch the silver behind the jamaica led by Clayton twins (New World Junior Record) in the 4x100m relay (42.94). Christine Mboma burst out for the fastest u20 anchor leg split in history by 9.86 seconds to catch up with the two teams in her front to finish for silver.

For those athletes who don’t know about the issue about her, this athlete is a ban from certain events where she is born to a race (400m) and was declared ineligible for the longer race because of a genetic condition that raises their testosterone levels. Christine Mboma’s real event is the 400m, where she hits the sub 49 (48.54) fastest 400m record for U20 (Not ratified because of her high testosterone levels).

Due to World Athletics’ rules on testosterone levels, Christine Mboma, a young Namibian who recorded the fastest 400-meter time of the year on Wednesday (June 30), will not be able to run over the distance at the Olympics.

Mboma and her countrywoman Beatrice Masilingi, both 18 years old, were required to take a test by World Athletics. The findings show that the two exhibit distinct sexual development (DSD) and significant amounts of natural testosterone.

For these athletes to compete in women’s events ranging from the 400m to the mile, the regulations of the world governing body require them to take medicines to lower their naturally occurring testosterone.

This means that shortly, neither will be able to compete over their favorite distance at the Olympics.

But they are both permitted to compete because they both qualified for the 200-meter race.

The athletes had been tested in Italy, where they are training, according to a statement from the Namibia National Olympic Committee (NNOC).

“It is important to understand that both our athletes were not aware of this condition neither did any family member, their coach, or the NNOC-CGA were aware of it,” the NNOC said. 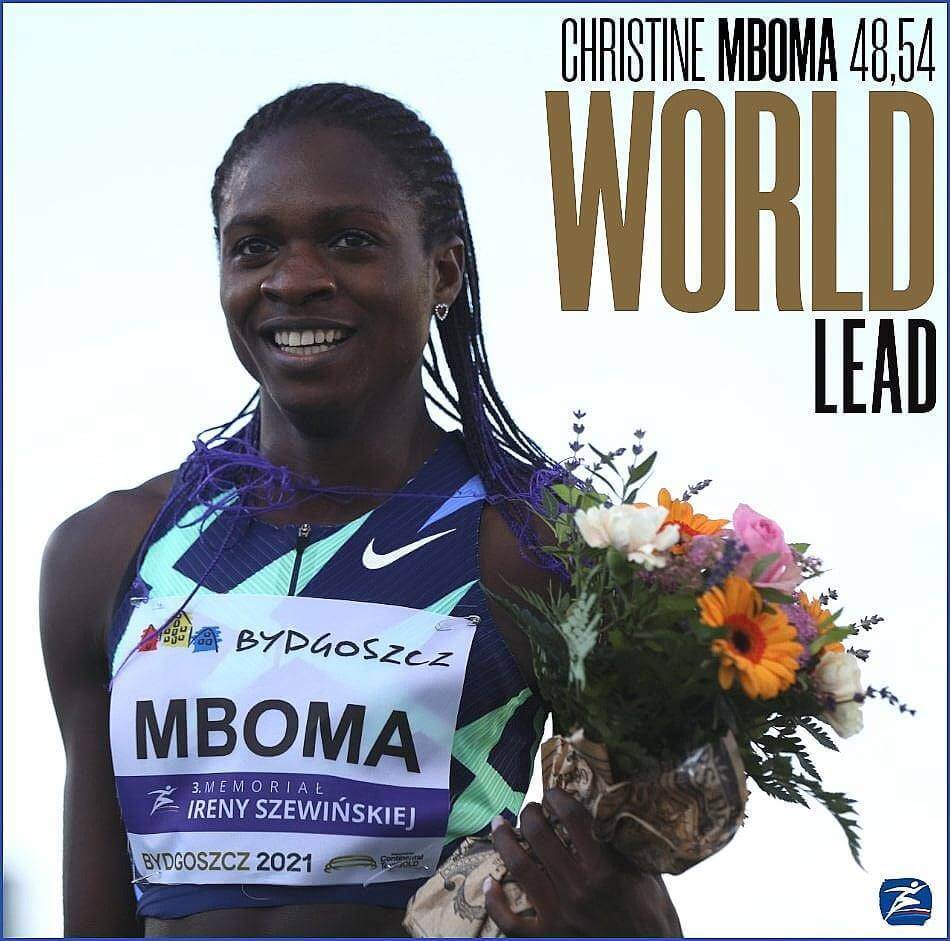 In the 400 meters, Christine Mboma set a new world junior record. The 18-year-old established a world record in the Irena Szewiska Memorial meet in Poland by stopping the clock at 48.54. In the 25-meter race, Christine Mboma finished second behind a field of elite competitors.

Christine Mboma is looking like being one of the favorites in the 2021 Tokyo Olympics.

After Salwa Eid Nasir of Bahrain, who went third on the all-time list in 2019 with 48.14 and led the Olympic qualifiers, was served a 2-year drug ban.

Road to Tokyo 400m (Salwa Eid Nasir is off the list)

Mboma Does it again

NAMIBIA – 49.22 for Christine Mboma in Windhoek
Christine Mboma of Namibia broke the 400-meter world under-20 record once more on April 17 in Windhoek, just one week after doing it in Lusaka with a time of 49.24. (1,650m elevation). She finished ahead of her training partner Beatrice Masilingi, who finished second in 50.05. She won the national championships in 49.22.

Article by Andrew Pirie, Vice President of the ATFS

Christine Mboma, a teenage girl from Namibia, achieved a remarkable Personal Best of 49.24 at the Allcomers meet at the National Heroes Stadium in Zambia. Christine is only 17 years old (she was born in 2003).

jogging in lane one Mboma sat in the blocks for an unusually long period, possibly missing the sound of the cannon. She reacted to the start when she saw the other runners had already taken a step out of the blocks.

Even though she had a lot of catch-ups to make, she sped down the back straight to make up for the significant advantage she had given the rest of the field. gaining ground on the field by about 220 meters. She seems to have run very even splits of 24.0 and 25.2 as a result.

Christine Mboma’s performance was a new world junior record-breaking the 30-year-old mark of 49.42 from Grit Breuer of Germany set at the 1991 World Championships in Tokyo. The performance was the 19th= of all time, 400 meters on the senior list.

She also took the season lead away from the top two Americans, Shamier Little and Quenera Hayes, who had finished the day before on April 10 at the Miramar Invitational in Florida with times of 49.91 and 49.92, respectively.

More than a second, she shattered the Namibian record of 50.42 from Beatrice Masilingi set last year on December 12, 2020, at AGN League 5 in Pretoria, Africa.  Mailing took second in this 400m with #2 in the world time for 2021 with 49.53 (almost 1 second off her previous national record). Mailing is also another talent (born in 2003). Unfortunately, both are not in the favorite seat for the World Junior Championships in Kenya, later in the Tokyo Olympic Games.

Christine Mboma looms as the greatest star to come out of Namibia since Frankie Fredericks, the 1993 World Athletics 200m Champion. Before this year, her best 400m was just 51.57. However, she opened with 51.59 on the 13th of March before lowering that to 50.97 on the 27th of  March.

Why isn’t the gender critical up in arms about Christine Mboma and Beatrice Masilingi?

I believe there has been a lot of discussion about it.
The IOC needs to put more effort into determining the parameters in a scientifically sound manner.
The fact that Mboma, a 400m specialist who was establishing world records, was unable to compete due to rules but was able to earn a medal in the 200m feels like something is still off and that the elevated T-levels may be a contributing cause.

Do we really want world records to be set that would raise questions about fairness, keeping in mind how young she is and the fact that at 18 she could be a dominant force in the 100-200m?
Before we enter into a really heated debate, I think the IOC ought to clarify its position quickly.