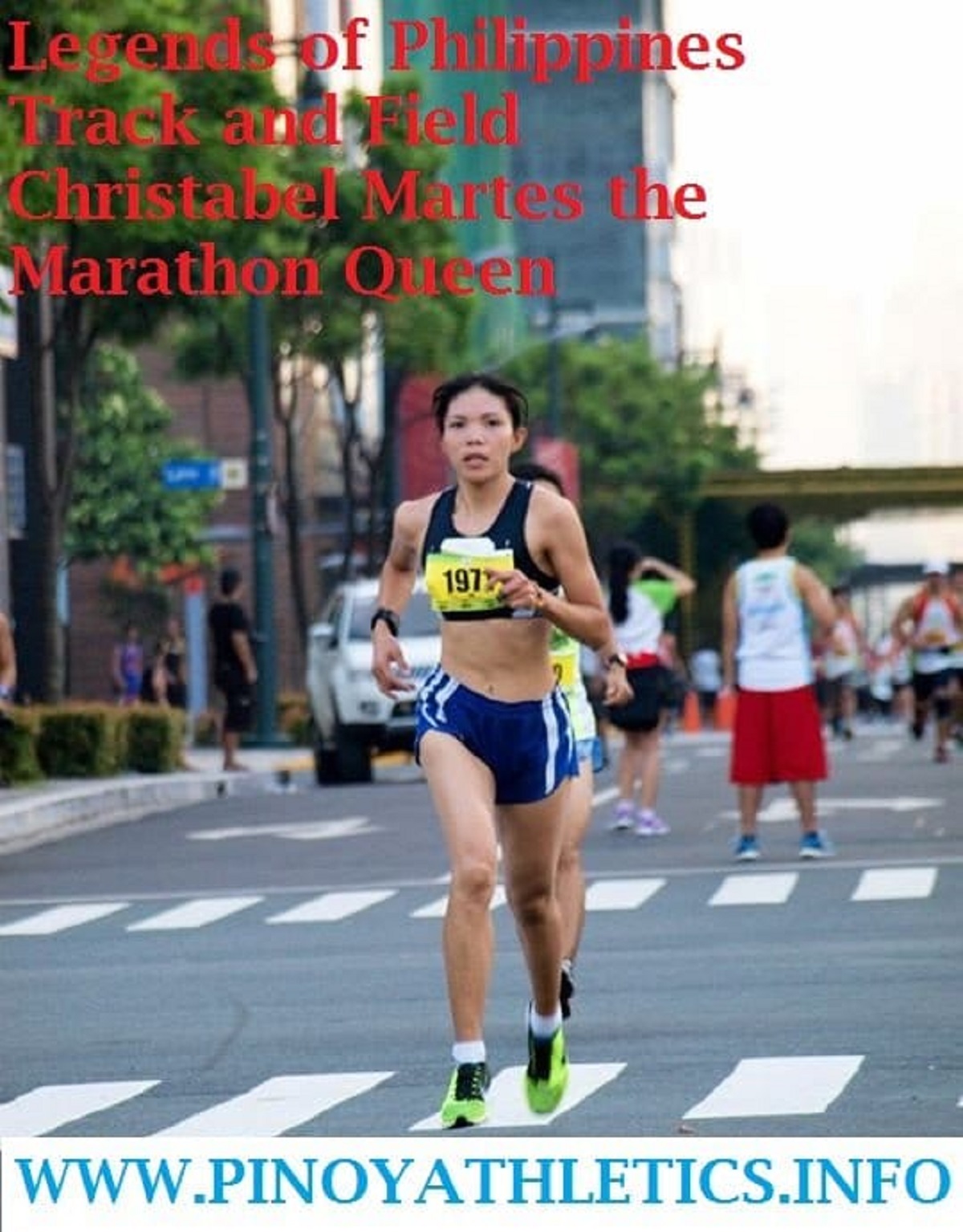 We have not done a feature on a legend of track and field for a while. Due to the preparation of the PNG and commitments to assisting various athletes.

Its only fitting that Christabel Martes who won the SEA Games Marathon twice in 2001 lost the title in 2003 and won the gold again in 2005 is inducted into the Pinoyathletics Legends of Athletics. Martes undoubtedly our countries greatest ever female marathoner still holds the national records in the 10,000m run (34:40.2) and Marathon (2h38.44).

However, Martes’s stint with the national team came to an end in 2009 when she was controversially cut from the national team for participating in the Milo Marathon.  In order to raise money for required surgery so she could continue representing the country. We ask Martes several questions in this article.

Born 1979 from the town of La Trinidad, Benguet near Baguio. Martes joined T&F events during the high school intramurals. She was also a member of the basketball team that represented her department in the University Intramurals, I played badminton and soccer too.

Martes was a 12-year-old freshman in high school when she started in Track and Field back in 1992. She tried different events from 200m to 3,000m, long jump and high jump. From Provincial., Regional up to Palaro. Martes coach before let her concentrate in the 400m and 400m hurdles.

At age 19, Martes approached veteran coach Mario Castro who was coaching the National Team. She saw them training and worked up the courage to talk to Coach Mario Castro. She wanted to try Long Distance running and was adamant but hopeful that one day she would be representing the country. It was an opportunity she took a chance on as she trusted in the ability of Coach Mario to help her reach her dreams.

Martes is one of a very rare few athletes who won a SEA Games gold medal the first time that she participated in the SEA Games. Adding to the nostalgia as the fact she regained the title after losing it in 2003.

Christabel Martes, What do you think led to you winning a SEA Games Gold in your First SEA Games?

I guess the foundation from my high school and college years. Almost every day I run on my own — no coach, no training program. You see in our place, no knowledgeable coach in athletics who knows about the training program. I was handled by coach Mario Castro after school year ’99, two years’ preparation to 2001 SEA Games.

At first i lacked self confidence when coach Mar told me that our goal is to win the gold (i just smiled). I had the attitude and was submissive to training coz I trust his coaching and it payed off.

My proudest moment? hmmm… i was proud of what I’ve achieved in my 10 years in the team.

My goal was to become an Olympian and I believe I had the capability if I had not undergone chronic injuries.

I credit my success as an athlete to my dad, he had always been my source of inspiration., to my family for there moral support. And of course, to coach MARIO CASTRO, us his long-distance athletes call him ‘Super Mario’.

Because he’s the most medal produced coach during our time (Daud Mama, Ed Buenavista, Allan Ballester, Roy Vence, R). Without him, no Christabel Martes in long-distance history.

Who were your fiercest rivals?

In the local, you know already hehe. (possibly 5k and 10k former SEA Games Champion Mercidita Manipol) In the int’l. level, it was Pa Pa from Myanmar (Pa Pa is now retired).

What sort of training did you do in your prime years when you ran the 10,000m National Record?

End of an era

Money versus Pride For the Country?

Present Reality of our Athletes versus Present Situation of our Sports Excellence Program?

“Yes, I’m a candidate for ejection from the Philippine team,” said the four-time champion Martes, the youngest Milo winner at 20 years old in 1999. “I’ll just talk to them and explain. I need the money. I’m having laser therapy for my old injuries and I need to buy vitamins.” (Note: Copied from news report at www.inquirer.net)

These were the exact words from the mouth of Christabel Martes, Lady Champion of the 33rd MILO Marathon FINALS held last Sunday, for her reason why she ran and finished the race despite a strict memorandum from PATAFA (Philippine Amateur Track & Field Association) that National Pool 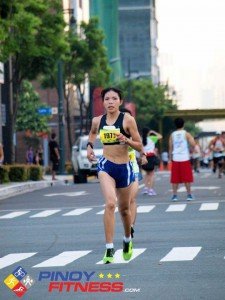 Meet. And the reason for this memo is to make sure that our National Athletes do not divert themselves to their training program in order for them to “peak” during the competition period/date and at the same time, prevent them from becoming injured.

In the reaction of the PATAFA officials, as published in the news, Martes will be definitely removed from the list of National Athletes slated to be included in this coming Southeast Asian Games which will be held in the first week of December 2009 in Laos. For winning a cash prize of Seventy-Five Thousand Pesos (P 75,000)  or equivalent to $ 1,595.00 in the MILO Marathon FINALS, her chance of winning the Gold Medal in Marathon in the ASEAN Games is gone!

Christabel Martes is a Level II IAAF Coach. However, due to her responsibilities as a mother, she is not currently training any athletes.

In addition, Christabel has a six-year-old daughter who she devotes a lot of her time taking care of. She also still runs in Road races. And recently in the Milo Marathon. When asked who she felt were the upcoming starts in women’s distance. 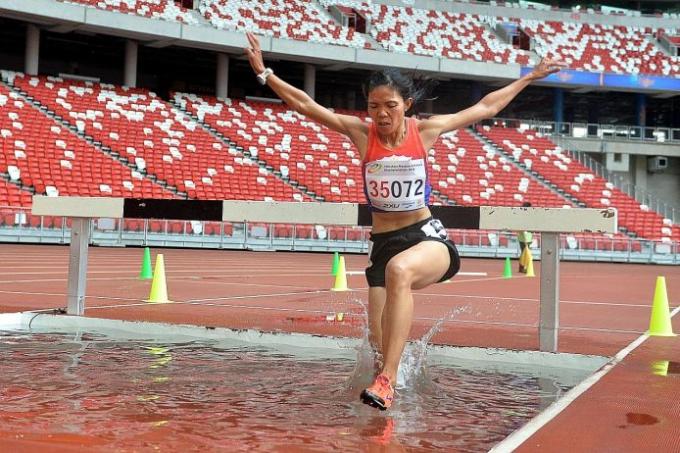 Martes does compete as a Masters Athletes winning the 2000M Steeple
Chase at the Asian W35 Championships.