In a twist of fate, former UE Trackster John Lloyd Osorio has surprisingly relocated to Cebu City, leaving behind the big smoke of the Capital City.

Osorio was mentored well by Coach Christopher and Coach Fronda at the University of the East.

He has moved to the University of Santo Carlos to spend more time with his dad.

He was previously in Manila as his mother works there.

“We have a scholarship for tuitition and  free use of track. Food here is alot cheaper than in Manila 100 Pesos can last a day and a half. It cant even last a day in Manila.”

At USC, Osorio will be coached by Arvin Loberanis.

“Its very different in Cebu, said Osorio we don’t have any many competitions there is only 5 meets a year, and there are left athletes overall competing”

Osorio’s resurgence in the 400m comes after he was a high school stand-out, clocking 50.3 at the NCR meet and 1:56.71 at the  2016 Palaro in Legazpi, Bicol, where he took the bronze medal behind Mariano Masano.

In an exclusive interview with John Lloyd Osorio. I pointed out with his time of just under 50 seconds; he can run even 1:51. Wenlie Maulas, a good friend of mine, timed 1:51.6 of a similar 400m time.

So Osorio has a lot of wiggle room. I look forward to the challenge of working with him and his new coach.

Possibly in his 800 this weekend, the advice goes out the first lap in 54-54.5 and closes in 1 minute as there might not be many competitors.

Above all, John Lloyd is a smart young man who understands the importance and has a deep respect for  Grass Roots coaches.

“I understand its not easy being a grass root coach.  I learnt a value life lesson from my new coach.

Coach Arvin took us to help coach some kids 6-12 years of age.

It was a big eye opening experience which gave me a deeper appreciation.

Overall, John Lloyd seems very dedicated to supporting Cebu Athletics. And is keen to grow and develop the skills he learned from his coaches at UE wherever he may be.

And is one of a growing number of athletes who are finding success training outside of the capital in regions.

If we look at Cebu, we won’t find anyone spare heading the movement more than Mary Joy Tabal, who chose to stick with her own coaches training in Cebu and Overseas.

Rafols Winner better than the Lottery

Beginning off his season after coming from injury, Rafols leaped a 15.02m PB to win the ASEAN School Games last June in Singapore.

Still, it was a performance to remember for Rafols, who told Cebu Daily News he wanted to leave the high school division on a high note.

“I will miss competing here but I have to prepare myself in the more competitive college level next school year,” said Rafols, who said he has chosen to remain with the University of Cebu next year.

“I think my experience in competing abroad helped me to gain more confidence in this competition. It helped me perform better,” said Rafols.

Due to a low turnout in some events, college athletes were allowed to join but scored separately.

Albeit the performances were far from the bests of Limos 11.99, which set the Palaro Record, and 25.3, which saw her also win the Gold last April in Legazpi City.

Limos began her season again with coach Ilde Banzon after having had her first international meet and medal at the Children of Asia, where she took bronze in the 100m Dash.

Limos, now 14, is preparing for the Batang Pinoy in Tagum at the end of November, where she currently shares the meet record at 12.47 set last year in Bacolod and won the 200-meter dash.

Meanwhile, Prince Joey Lee of UC logged a new record in the men’s 5k race by clocking 15 minutes and 34.87 seconds for the gold.

He erased the record of former USPF ace Mendel Lopez, which stood at 16 minutes. According to the tournament official Lyle Larida, they have to determine the year Lopez logged the record. Lee’s gold was one of the 13 UC won yesterday. 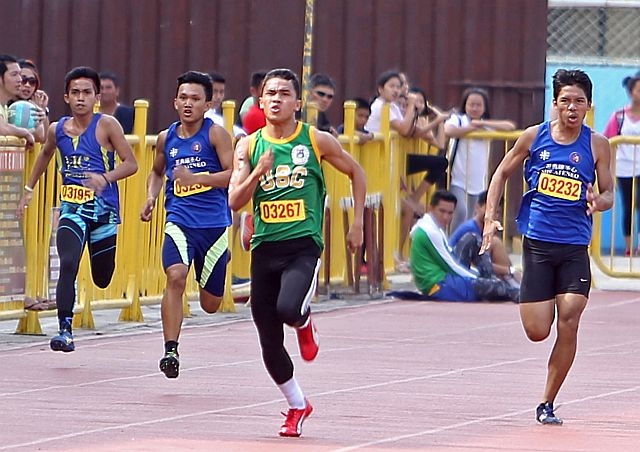 Seth Pilapil of USC dominates the 200-meter final, one of two events he won yesterday at the start of the 2016 CESAFI track and field competition at the Cebu City Sports Center track oval. (CDN PHOTO/LITO TECSON)

Roneth Ayuda led USC with three gold medals from the women’s 100m and 400m hurdles and high jump, while Jessielou Rebalde chipped in two gilts from the 100, 200m, and 400m sprints.

Children of Asia Games bronze medalist Samantha Jane Limos was the only UC athlete to win two golds. She dominated the 200m and 400m sprints.

CESAFI Cebu. Please take note PATAFA does not sanction this meet. So these results are for reference only. And cannot be cited for.