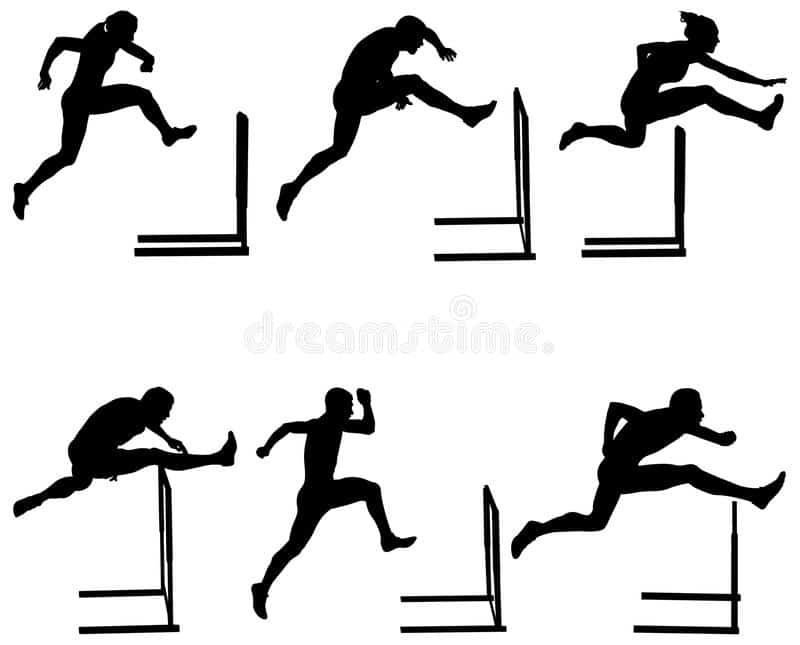 Hurdling the ability to apply movement or new movement speeds over hurdles while trying to maintain optimal sprint form.

This article will explain some fundamentals of Basic Hurdles Training.

The Differential to 100m sprints is

A good hurdler is someone who is aggressive and can attack the first hurdle with no fear of that first hurdle.

The Block start for the 100/110 Hurdles is different from that of the 100-meter dash. As the athlete must come up sooner as not to crash or hit the first hurdle. Hurdlers are usually up and tall by the 4th step out of the blocks.

Trail leg is usually on the front block regardless of which leg they use in that position in the 100-meter dash.

One difficulty an athlete may have is adjusting steps as their 100-meter raw speed improves.`

However, it is recommended the short Hurdler athlete like in the 100 meters keep accelerating to 60 meters.

Speed increases with stride rhythm remain consistent. The athlete should be relaxing and not overthinking.

4 steps are for beginners, 3 steps between hurdles are ideal as it means clearing with the same leg throughout the race. 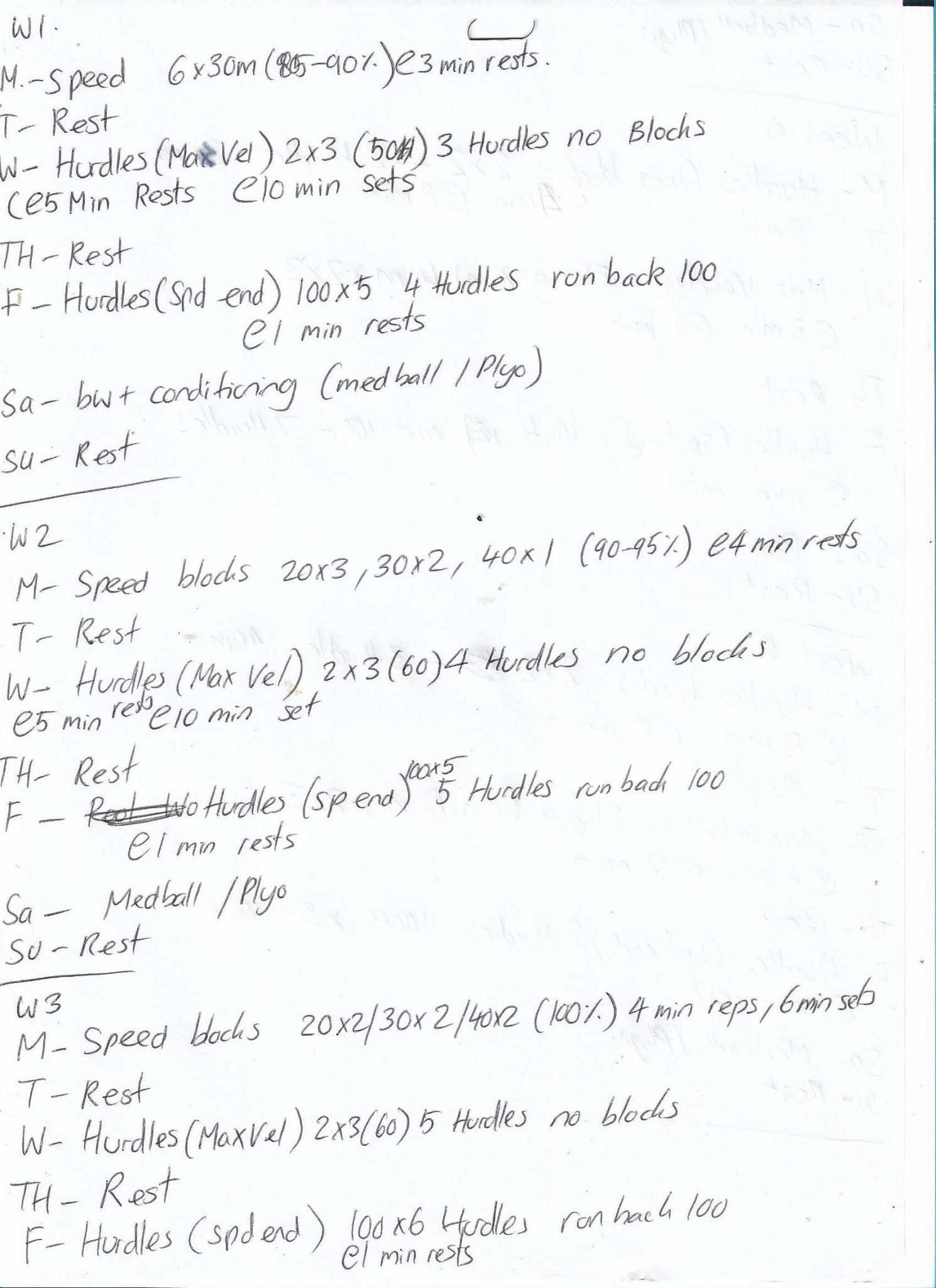 Complete warmup fast repetition preferably from the blocks 1 or 2 or 3 flights of hurdles.

Why aren’t there more sprinters who double in the hurdle races of similar distances?

The timing of the events and difficulty of the events – particularly the intermediate hurdle race – makes it difficult to compete in the hurdles and a similar sprint race.

It’s not impossible, but this is generally reserved for the absolute best athletes.

This is an interesting topic because there are many strong 100m/110m hurdlers who also have good open 100m speed, and almost all elite 400m hurdlers are also strong open 400m sprinters.

There are many reasons for this and they vary depending on the level of the athlete.

It generally begins at the high school level.

The most common reason that this combo isn’t often done on the high school and college level has to do with the order of events.

Simply put, there is too little time between the hurdles and the comparable sprint races for athletes to get a full recovery.

In California, the most high school meets follow the order of events listed below.

This means that athletes attempting this combination would have a very brief recovery period.

Though this is a doable sprint since both races are short sprints, it’s still a demanding combination

It’s also worth bearing in mind that anyone attempting this combination could possibly also be running on the 4X100 relay team, which means that they would end up running three of the first five events at a given meet.

The 300m hurdles is also a demanding race. So even with the extra rest time, it’s possible that an athlete attempting a 400m & 300m hurdle combination would still be fatigued from the 400m race.

The commonly combined individual races are spread out in a way that makes it easy to compete without experience too much fatigue.

I have seen a handful of athletes on the high school level attempt this combination. He then competed in the 400m and 300 Hurdles at the CIF State meet and won both events.

In the cases of Denby and Wyatt, it’s worth noting that these were exceptional athletes in unusual circumstances.

Both athletes led their teams to State team titles, so their grueling event combinations were at least partially motivated by the desire to score team points at the meet.

Both of these athletes set national records in their events – Denby in the 100m hurdles and Wyatt in the 300m hurdles – so they were literally among the greatest performers of all time.

Lastly, I should also mention that Denby collapsed on the track after her final event from complete exhaustion.

On the college level, there tends to be more spacing between races due to a different schedule of events, which includes the addition of the 3000m steeplechase, the occasional 10,000m race, and the 5000m instead of the high school 3200.

Also, college athletes are stronger and more physically fit than their high school counterparts, so in theory, they could run more events.

However, college coaches typically avoid overloading their athletes in training and in meets, so you seldom see athletes take on a high volume of events.

It’s quite common to see athletes – particularly hurdlers – who only run one event per meet.

There are occasional exceptions. Devon Allen, reigning USA champ and a 2016 Olympian in the 110m Hurdles, currently competes for the University of Oregon. While they are likely to star on their team’s 4X400m relays, the open 400 and the 400m hurdles at the same meet is tough.

Anecdotally speaking, I did the 400m/400m IH combination twice: once at an invitational and once in our meet against Stanford. It was extremely unpleasant.

Both times I didn’t fully recover from the first race, so I ran slow times in the second race.

I do recall that Rickey Harris of the University of Florida did both events at the NCAA Championships.

Most people thought he was insane for even attempting that combo.

Finally, there are professional athletes, whose training is even more specialized and less voluminous than college athletes.

Professional athletes typically find their best event and focus on that.

If they compete in other events, it usually serves a practical purpose, like a tune-up or training event to improve in their main event.

An example of this would be a hurdler who does the occasional 100m to get in some speed work.

On the pro level, there are a few short hurdles that double up. In outdoor track, Gail Devers sets the gold standard from combination sprinter-hurdlers with multiple gold medals at the Olympics and World Championships in the 100m and 100m Hurdles, including many golds at the same meet, such as the 1993 World Championships. On the other hand, pro 400m hurdles almost never run the 400m in the same meets that they run the 400m hurdles unless it’s running a leg on a relay. Angelo Taylor has multiple Olympic medals in the 400m Hurdles and 4X400m Relay, but he also has a bronze medal in the open 400m from the 2007 World Championships.

However, it’s worth noting that he did not compete in the hurdles at the 2007 World Championships. Combining the hurdles with sprints is already a difficult task due to the timing of events, but as an athlete’s career continues to the college and pro levels, the difficulty of the events, the awareness to avoid running too many races in a single season, and the need to specialize in order to remain competitive altogether force athletes to focus on just one race.