Skip to content
06. Other Sports Book and Films Reviews 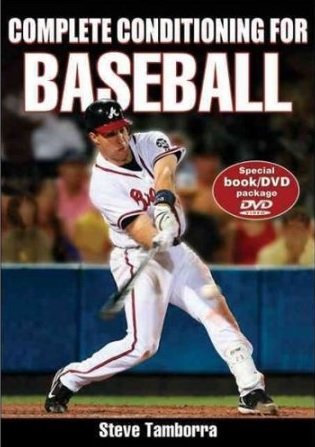 Today’s players are bigger, stronger, and faster than ever before. So a focused conditioning program has become essential to on-the-field success. Therefore Complete Conditioning for Baseball features a comprehensive training approach that builds players’ physical abilities as well as the baseball-specific skills their positions require.

His programs will help you in these areas:

Also, the 45-minute DVD takes you onto the diamond and into the gym to demonstrate the same exercises and drills by the game’s best.

In conclusion, Complete Conditioning for Baseball is your guide to maximizing your talents and becoming a perennial all-star.

“Finally a true baseball training program for dedicated players, managers, and strength and conditioning coaches. From year-round conditioning plans to position-specific programs, Coach Tamborra’s Complete Conditioning for Baseball is a must-have for any player seeking success at the plate, in the field, or on the base path.”

“Steve’s passion for excellence, coupled with his desire to see athletes succeed, has been an important factor in our program’s success. That passion and expertise combine in Complete Conditioning for Baseball’s book and DVD set, making it the premier training package for the sport.”

Also, Steve Tamborra is a respected strength and conditioning coach who has trained 60 AP Collegiate All-Americans, 16 first-round draft picks, and more than 100 athletes drafted by professional sports teams, including 10 players drafted and the fifth overall pick in 2007.

Baseball Softball Philippines Asian Games: Blu Girls going all out in a bid for a breakthrough medal The Philippines placed 13th in the 2018 Softball World Championship in Japan earlier this month, which saw the United States win gold to earn a spot in the 2020 Olympics. The host country settled for the silver.

The experience that the Blu Girls gained in the World Championships is now serving them well in Jakarta, as they have won their first three games starting with an 8-0 triumph over Hong Kong. They then beat Korea, 5-3, on Monday afternoon before edging China, 1-0, on Monday night.

After beating world number 4 Australia in the World Cup of Softball XII, the RP Blu Girls have pulled off yet another upset to start their campaign in the opening round of the Canada Cup International Softball Championship in Softball City, Surrey, Canada.

In front of the home crowd, the Blu Girls built up a commanding 4-2 lead as early as the 3rd courtesy of Garie Blando’s 2 RBIs while Francesca Altomonte made a home run in the 2nd to drive in two runs.

The Philippine national softball team has now tallied four straight wins coming from a stint in the World Cup of Softball XII in Oklahoma, USA where the Blu Girls also won against powerhouse Australia. After upsetting Australia, the Cebuana Lhuillier-backed Blu Girls are determined to show their best against top-ranked Japan, Canada and Puerto Rico which they all play on Friday. Photo Credit: Alex Pastor

After upsetting Australia, the Cebuana Lhuillier-backed Blu Girls are determined to show their best against top-ranked Japan, Canada and Puerto Rico which they all play on Friday.

The Cebuana Lhuillier-backed Filipinas led as early as the first inning courtesy of Arianne Vallestero’s three RBIs while Fil-Am Dani Gilmore scored a solo home run. In the second inning, Kailey Cuico doubled off to drive in three runs to secure the win.

Hoping you could accommodate the opening game story of the World Cup of Softball XII currently being held at the Amateur Softball Association (ASA) Hall of Fame Complex Field 4 in Oklahoma City, Oklahoma, USA.  Our Philippine National softball team, RP Blu Girls, ranked number 17 in the world, beat world no. 4 Australia with a score of 7-5.