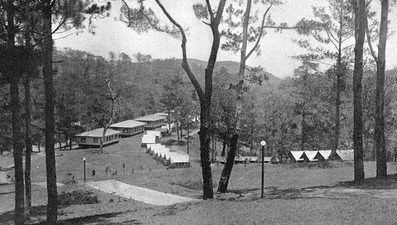 As I intend to head to the Baguio teacher’s camp this weekend I have done some background research into the camp as I was curious as to how old it really is and as a fledgling historian I wanted to know a bit about its background. Here is what I found. The link to the full article is below I have just picked out the important parts.

From reading this they had a variety of higher-level courses offered at the beginning of the 20th Century in a transitional period for the Filipino people.

When the American teacher was bored, lonely, depressed, or in need
of any assistance, they had to rely on foreign people to assist them. Of course, there was nothing wrong with this.

However, these Americans would sometimes miss the company of their friends and colleagues. Teachers’ Camp gave those Americans the opportunity to “socialize with people of their own race.”

There were costume parties and dances at the Pines Hotel. There were various performances and shows to be watched, and the teachers even had the opportunity to perform in some.

Believing that physical activity was important for the well-being of the person, Camp organizers made sure that there were outdoor activities for all visitors in the camp regardless of age, size, or sex.

is just some of the sports and games played at camp.

This was the beginning of the promotion of sports in the Philippines; I will link an earlier article soon on how the Americans introduced sports to civilize the people of Benguet to prevent them from practicing head-hunting and cannibalism.

While during the early years participants used to live, eat and work in tents, the evident importance of Teachers’ Camp led the Department of Public Instruction and the Colonial Government to allocate funds for the Camp’s
improvement. Dormitories, cottages, a social and mess hall were built.

*In my next article on ghosts this will mention about the tent city of the teachers.

Roads and paths within the camp were improved, and an athletic field was built. When it was completed, it was one of the most modern of its kind in the country.

recognizing the importance of Teachers’ Camp, walked its grounds.

Due to the limitation of sources, the core of our research ends in 1913. After 1913, hardly anything is written about Teachers’ Camp in the Bureau of Public Instruction reports.

The authors of this paper are still exploring the answer, However, in 1913; Harrison replaced Forbes as Governor General of the Philippines.

As a result, Baguio for a while faded into the background as a priority. Other government offices probably followed Harrison’s example, preferring to focus on other matters.

Of course, without the source, one can only speculate what happened to Teachers’ Camp thru theyears.

What is certain are the following facts: from 1936-1941, Teachers’ Camp became the PMA Campus; during the war, it was the hospital for injured Japanese soldiers.

Certainly, education in the Philippines would have taken a very different route. Second, it was in Teachers’ Camp that some of the policies and regulations that were to affect all the students in the entire country were introduced and discussed.

Everything the teacher learned from Baguio would be applied to his/her students. You may be a student in the remotest part of the country, but you would still benefit from what was done in the Camp.

Because of the Teachers’ Camp, an entire nation was educated and shaped. It is the greatest role an institution could hope for, and this little corner of Baguio has that honor.