Why in a race track, are the athletes given different starting positions? 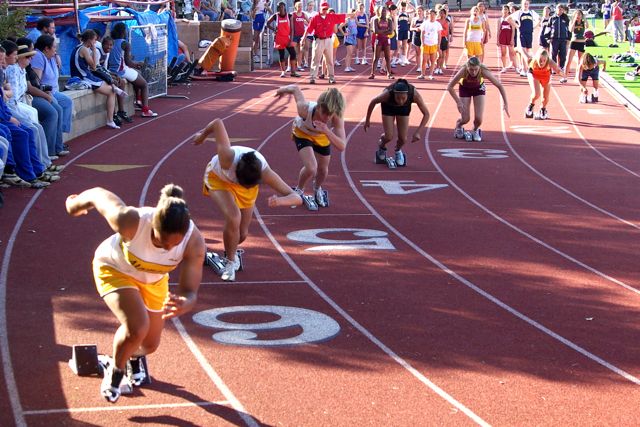 Why in a race track, are the athletes given different starting positions?

They are given starting positions such that the distance they run in total is the same. When you say ‘different starting positions,’. What you actually mean is a staggered start, or athletes starting at different positions along the track. Such a start occurs for pretty much every single distance over 100m but is most obvious in the 200 and 400.

When running along the outside of the track, say in lane 8. The athlete will run more than the athlete running along the inside of the track, or lane 1. Increasing one’s lane number by one or running on the next outer lane will increase the distance run on the curve by about 2.5m. To make up for this difference, athletes in the outside lanes are given a ‘headstart’ which compensates for the extra distance on the curve they have to run.

As mentioned, the stagger is nowhere near as great for anything above 400. Unless you have quite a few participants. In which case some will be given a large headstart. But are not allowed to cut into lane 1. Until they reach the next straight. Because the difference is insignificant at such distances.

Think of a donut regarding athletes given different starting positions

The line along the inside diameter of the donut, along the edge of the hole, is a much shorter distance than the distance around the outside of the donut. This is obvious from visual inspection, without the necessity of employing any tools for measurement.

The same thing is true for the curved portions of an oval race track. Again, no extraneous measuring tools are necessary beyond your own two legs. Go to a track. Walk the inside lane, from straightaway to straightaway, counting your paces. Then do the same thing in the outside lane. Not surprisingly, you will need many more steps to cover the distance on the outside compared to walking the inside. What you may find surprising is just how many more steps you will need, as the difference is substantial. So, as the other answers point out, the staggered start is necessary to equalize the distances the runners in the various lanes will cover. It is a question of basic geometry. In small meets, dual-tri, the starter will usually have the schools draw lanes in the first race in lanes. And then rotate with the rest of the races. Considering the middle lanes are considered the most advantageous. The school will be given one of those and they will take turns choosing lanes. In large meets, usually, the assignment of lanes is done by the perimeters set up in the software for scoring the meet. There are so many ways to set up the meet. Randomly in qualifying heats, and then by qualifying heat results moving through later rounds. Or you can use qualifying times from previous meets to decided heats and lanes. Every governing body, league, state, national, international have their methods, and they vary based on how much weight they put on the qualifying athletes’ entry times. This could easily be a 10-page answer.

The staggered starting positions coincide with the track bends in order to ensure the athletes all run the same distance. A standard oval track is 400m long, in one place. If all of the athletes in a 400m race started next to each other, the athlete on the inside of the bend would run the shortest distance and the one on the outside would run the longest distance. Therefore the one on the outside starts furthest ahead, and so on backward.

The stagger for a 10,000m track race is nowhere near as pronounced because the starting differential isn’t as important when the main race is that long.

Tokal Mokalam 10.2 and his tragic end.
70 Fun Track Ovals in the Philippines, Guaranteed for your running needs (Updated 2019)
Jaime Grafilo
Other Media