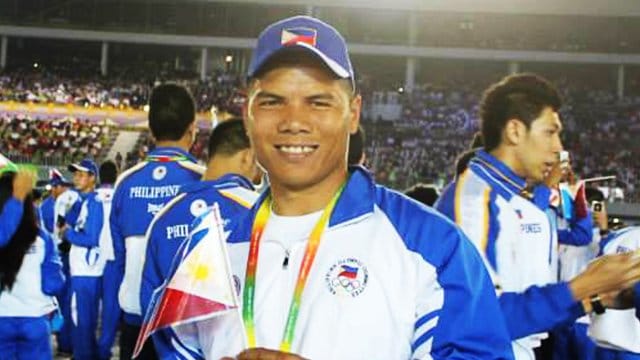 Arniel Ferrera LEGENDS OF THE HAMMER

Arniel Ferrera was born on 22 Mar 1981, hailing from Bacolod, Negros Occidental. The second of seven children. His father was a heavy machine operator and his mother a housewife. His other interests included fishing and carpentry.

Before becoming a national team member, Arniel was mainly mentored by the late Irish Priest Fr. Colum O’Halpin MSSC, who was assigned as Chaplain in BISCOM Champel in Binalbagan. He spent all his life in Negros and died in 2003 and buried in Kabankalan.

He was Arniel’s coach at Binalbagan Catholic College in Bacolod. Gerro Perrater, a few years older than Arniel and was at the same College, was a huge help and influence to him.

The National Team recruited Arniel after the National Open. During his time on the national team, he was coached entirely by Danilo Jarina.

And a fond memory I recall is our first encounter. When I met him staying with his teammates from Bacolod in the toilets at the Rizal Memorial in the dugout, this didn’t get them down. They were singing and playing the guitar.

Arniel held the Junior Discus Throw record for 20 years from 2000 to 2019 until Joel Delina broke it at the University of the Philippines. And his Junior Hammer Throw record, however, remains untouched.

Arniel Ferrera, at 20, was the SEA Games bronze medalist in Kuala Lumpur in 2001.

He went onto win titles from 2003 to 2009 before conceding it to Tantiphong Phatchaiya of Thailand. Arniel was not able to land a medal at a higher level meet.

“Four things make a good throw–speed, power, rhythm, and explosiveness,” says Ferrera in Filipino. “Those were the things I worked on in preparing for the SEA Games.

My experience in the Asian championships in Inchon, Korea. Last September was a big help. Because although I finished only seventh. I competed against quality throwers from all over Asia.” – After winning his first gold in 2003.

In 2007 Arniel broke his own SEA Games record.

Also, Arniel threw his personal best of 61.62m at Vientiane Laos at the SEA Games. It was the 4th, and last time he would win gold in the process of setting a SEA Games and SEA Record. The next SEA Games Champion, Tantipong Petchaiya of Thailand, broke both his records. 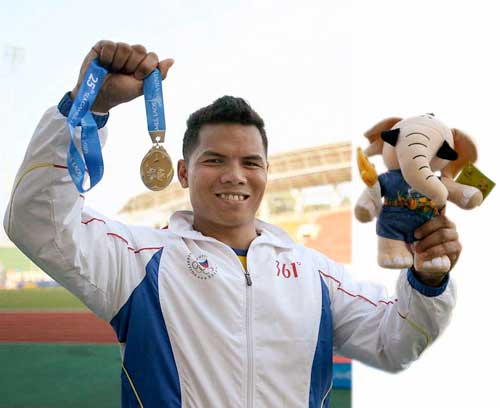 Arniel entered the UAAP as a master student at the age of 24, to Ateneo he set a still-standing record in 2005 of 55.67m in the Hammer Throw.

Arniel did not medal at meets higher than the SEA Games. He did, however, place Top 8 at the Continental level.

Changing of the Guard

He came out of retirement in 2017 at the Malaysia SEA Games and captured a Bronze at 36. And won the national open again in 2019 after the shock retirement of Caleb Stuart. With a throw of 57.26m. Relegated to 6th place in Hammer at the 2019 SEA Games.

Arneil Ferrera, who started coaching in 2012, is yet to produce a SEA Games medalist. Among the throwers, he did work with include SEA Games athletes Rhea Sumalpong, Daniela Daynaata, and most prominently, John Albert Mantua, who all came from other coaches before working with Arneil.

He also did several coaching clinics around the Philippines as a Run for Change and Throwers Circle.

Arniel, along with Danilo Fresnido, attended the Level 2 IAAF CECS Course for throwing events. Arniel is currently a PATAFA and Ateneo Throws coach.

Arneil Ferrera served for a brief time also as President of the national training pool of athletics. And also participated in Masters Athletics.

His primary residence now is in Baguio, where he now resides with his wife and two sons 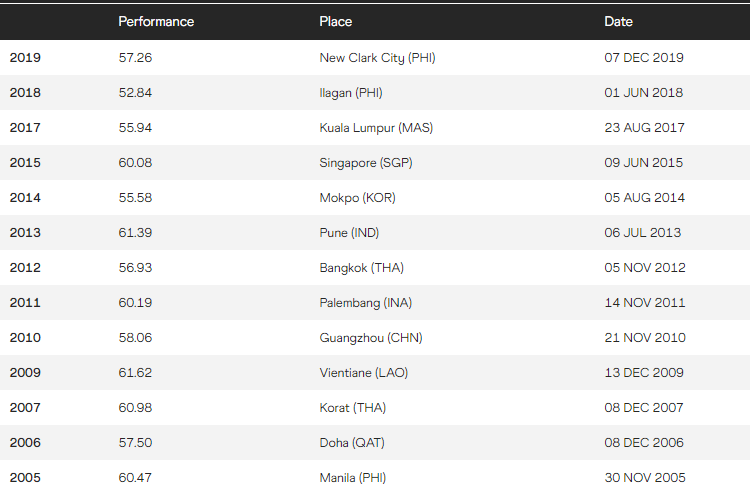