Anfernee Lopena – The Boy Next Door #1

Humble Anfernee Lopena, the boy next door, wins his first national title in the Century Dash

Arguably one of the nicest guys in Philippine Track and Field.

And the quintessential boy next door, Anfernee Lopena, finally became the Philippine National Champion in the prestigious 100m Dash in the 2017 National Open at Ilagan.

While originating from Bohol.

He was first at the University of Recoletos in Cebu, which later closed down.

Recommended by pinoyathletics to CSB.

He ran the 100 at the Asian Champs and made the Semi-Finals.

Also, Lopena timed 10.70 and finished 9th, missing out on the SEA Games Finals in the 100m event.

After pointing out the 2-hour delay, wet weather (everyone had the same conditions), and jet lag (a short flight from Manila).

It was later ascertained that Lopena, the national champion needs a consistent sleeping pattern with 8 hours or more sleep.

note: the block start was not equipped with “speakers,” which created disadvantages for athletes in outer lanes.

Therefore, runners in lanes 5-6 had a slow start as compared to 1-4. The fastest man in Southeast Asia, Khairul Hafiz (PB 10.18s) had missed the start by over 0.30s, and this could be due to the missing block speakers.

Next up will be Julian Reem Fuentes in the Long Jump at 8.30 pm today Malaysian Time.

And clocked 10.86 to place 4th in his heat. Lopena, tired from traveling and had to cope with 2 false starts and nerves, was well off his PB of 10.47.

Lopena’s performance placed him 24th in terms of time.

If there are 3 semis, he will qualify last to the semi-finals.

19-year-old Khairul Jantan of Malaysia had the fastest times in the 6 heats clocking a SEA Leading 10.28; former Asian Champion Femi Ogunode of Qatar jogged through in 10.29.

Humble Anfernee Lopena, the boy next door, wins his first national title in the Century Dash.

Anfernee Lopena crowned himself the country’s fastest man by winning the 100M Dash. Lopena’s time was 10.65, just outside his PB of 10.51, but the same as his NCAA Record last month.

The second was perennial visitor Eddie Edwards of Sabah Malaysia, and the bronze went to Jomar Udtohan, Lopena’s training partner in the national team.

No Fil-Heritage sprinter participated in the 100m Dash this year.

It was only a matter of time before arguably the nicest guy in Philippine Athletics would become a national champion.

Hailing from the island of Bohol near Cebu.

Lopena was Palaro Champion in the 400m. After that, he began attending South Western University in Cebu.

It was unfortunate news that the school disbanded its athletic team. It was then that Lopena contacted me, asking for help to find a school.

I didn’t know much about him at the time, but he seemed like a genuine person, so I decided to help him.

I recommended him to CSB at the time; the coach was my good friend Emerson Obiena.

Then under my former coach Joseph Sy.

Lopena never took a single day for granted he spent at CSB.

Slowly rising through the ranks of the NCAA, firstly in the shadow of Daniel Noval. His time went from 11.3 to 10.51 over the 4-5 years he spent at CSB.

Anfernee Lopena (College of Saint Benilde) is playing his final year in the NCAA. At the same time, Regaining the 100m title in the Men’s 100m.

And in the process of the NCAA record.

While Lopena, 23, who hails from Bohol, has a personal best of 10.47 set during the weekly relays last year.

*Lopena time of 10.64 in the heats exceeds Udtohan 10.66 from last year, but it’s awaiting wind reading for ratification.

This came at the expense of defending champion Jomar Udtohan (San Sebastian). In contrast, he was forced to withdraw from these games with an injury.

Focussing on getting ready for the National Open in Isabella later this month.

While both Lopena and Udtohan are members of the national training pool.

And Lopena, a few years back, was struggling to find a school after his school in Cebu disband its funding for the athletic teams.

So he came to Manila with a PB of 11.6 only. While working with Joseph Sy, this time became a distant memory.

And the end of a beautiful Chapter came when Lopena.

I also regained the double, winning the 200 Meters as well.

Also, Lopena placed third in the 400m behind Francis Medina (Perpetual) and Galleon.

While Lopena hopes to make the standard for the SEA Games in 2017, which is 10.47 for the bronze.

And will next compete at the national championships in Isabella.

Most noteworthy is that Lopena has never been a national champion.

And this is perhaps another achievement to tick off the bucket list one day. On what could very well be the rise of a new national sprint champion someday. The humble boy from Bohol, Anfernee Lopena, 22, rounded off a fabulous 2016, winning both the 100 and 200m Dash at the Weekly Relay Finals. Lopena clocked 10.51 to beat NCAA Record Holder Jomar Udtohan 10.71 and 2013 SEA Games 400m Champion Archand Bagsit 10.80. The mark was just outside his 10.47 PB, which had been the third-fastest mark of all time by a Filipino sprinter.

He then was rewarded later with a new PB of 21.68 in the 200m Dash. While improving from his 21.75 race a few weeks back in eliminations. He held off Bagsit and Udtohan.

It was better luck for the timekeeping this week than it was last week.

Also, 40.2 cannot be allowed due to a timing malfunction in the electronic device belonging to PATAFA. Firstly in the 200 times were not recorded. Later in the 4×100, Isidro Del Prado, Jomar Udtohan, Clinton Kingsley Bautista, and Anfernee Lopena clocked a time of 40.2. This mark would have been under the 40.64 national record; however, and captured no photo finish. Photo finish is part of the requirement for track records in sprints. The hand-time given was 40.5.

Yesterday the same four clocked a time of 40.90et.

Anfernee Lopena of CSB  put out a speedy time of 10.47et at the weekly relays in Pasig.

And during the event’s semi-finals at Pasig on 23rd October 2016.

Hence it was reported by Wind gauge operator Ruben Ferrer the wind reading was (0.2).

However, we are now just waiting for the official results page from PATAFA.

National Coach Ojon Artiaga stated that one of the timekeepers clocked Lopena at 10.03 (10.1 hands timed). Lopena topped the Semi-Finals with the fastest time of 10.47.

Hence the time was a big improvement on Lopena 10.63.

Also, the time places him first in the National Ranking lists this year.

The 10.47 was the fastest ever time recorded by a Filipino on Filipino soil.

As the above recorded, their best performances were in Singapore and Claremont, USA, respectively. 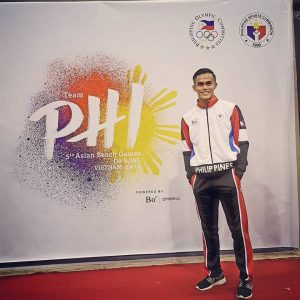 Lopena missed out on the 2015 SEA Games by a few spots when it was decided there were not enough slots to field a 4×100 meter relay team.

While his chances are looking certain for the 2017 SEA Games in Kuala Lumpur, with his time of 10.47 just within range of the 10.45 silver and bronze medal time from 2015 in Singapore.

Yet Lopena is ranked #7 in the SEA Ranking Lists for 100m after this run.

Most noteworthy, Lopena only started competing for the Philippines this year despite being in the national training pool for two years.

He had stints in Taipei Open and the Asian Beach Games in Vietnam to boost his performance.

While Lopena hails from Bohol, he transferred from the University of San Jose Recoletos in Cebu to the College of Saint Benilde in Manila in 2012 when his previous team decided to disband their track team.

Currently in his final year doing a BSBA in Computer Application.

He is coached by former national coach Joseph Sy, the head coach at the College of Saint Benilde.