Although he will be in the shadow of our greatest High Jumper. Simeon Toribio. Andres Tan Franco’s tremendous unmatched Asian Games gold medal feat finally earns him the right to the Pinoyathletics Hall of Fame.

He was raised and born in Tondo, Philippines (30 November 1925). The youngest son of Sabina Tan and Agaton Franco. He has four sisters Aurora, Natividad, Indiana, Edeng, and one brother, Alberto. He is of Spanish and Chinese descent.

After the war with Civico, Grando retired. Andres Franco immediately burst onto the scene at age 23. Andres Tan Franco would continue as the most dominant High Jumper in the Philippines for another 6 years from 1948-1954 (Mengoni 1973).

While the highlight of Andres Tran Franco’s career was winning the Gold Medal for the Philippines at the 1951 Asian Games High jump with 1.93m. Furthermore, this feat could have landed Andres Franco second or third if he had participated in the London Olympics in 1948. Also, he won an Asian Bronze medal in the 1954 Asian Games. 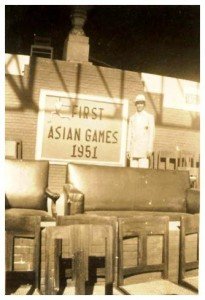 Also, Franco played Basketball. And later became a Basketball Referee/coach. And established a career as a Police Man. A kind man of sound moral principles, Franco refused a bribe from a Chinese shop owner.

Also serving as a technical official in Track and Field.

Franco was named athlete of the decade (1945-1954) by the National Collegiate Athletic Association.

During the early years of the Philippine Amateur, the Basketball League approached one sports writer at the Rizal Memorial Coliseum complaining that the PABL officials at the gate of the sports venue wouldn’t let him watch the then ongoing game where his son Aris was playing.

The journalist approached PABL chairman, Oscar Villadolid who recognized Franco. Villadolid introduced Andres Franco to the stuff then stated that from then on, Franco would be allowed to watch any game he pleases, and a seat at the presidential box was to be reserved for him. Franco then watched numerous games at the Coliseum.

Sometime in his later years, Andres Franco suffered a stroke. He died in early 2008 due to a lingering illness.

*More Information to come this is a work in progress 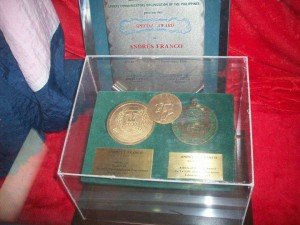