Who’s the better runner when conditions are the same?

Please note that the sand De Grasse ran on was sand, not compacted Dirt like Jesse Owens, which might have made a significant difference.

They should have at least ran this test 10 times to get a baseline.

Who would win in a race, Usain Bolt or Jesse Owens?

Usain Bolt, but not by the 0.4+ seconds that their personal records indicate. Owens ran on cinder tracks and wore slightly heavier shoes with a less stretch-shortening reflex than modern sprint shoes afford. But Bolt’s stride length (he takes only about 43 strides to complete some of his races compared to 46 or so for Owens) is incomparable and historic. This is coupled with a notable crural index (leg length divided by thigh length of over 1.0 – Owens and Bolt have this), which is beneficial for quick hip flexion/extension turnover.

Though neither athlete’s anthropometrics have been officially reported, guesstimates from photographs of each seem to indicate that Bolt had a better current index. With such stride length (Bolt is over 1.93 meters in height, Owen may be less than 1.83 meters) and turnover rate. And with a probable plethora of Type IIx muscle fiber motor neurons in his hips, thighs, and legs. Bolt is a true freak of nature. He showed that (at least on the world scene) at age 16. His domination over three Olympics is unheard of (in sprinting, at least) and will probably never be equaled.

Owens may have had a slight Type IIx motor neuronal advantage over Bolt. He was quicker and more powerful out of the blocks. And coupled with is a more compact form. He (given equal advantages) would probably beat Bolt in any sprint event up to about 70 meters. Owens displayed this type of power as a useful tool for the long jump, arguably his best event. His modern comparison would be Carl Lewis, who, non-coincidentally, also has held the long jump world record as did Owens. But Lewis ran 9.86 with the modern luxuries afforded Bolt, who has run 9.59.

In a race against Lewis and Owens. Bolt would trail for much of the race (and Owens would have a slight edge over Lewis since he was more compact and marginally more powerful). But Bolt’s ability to accelerate mid-race is astonishing. And his top-end velocity unequaled maybe in human history. These sorts of attributes allow for Bolt to stalk his opponents much of the 100-meter race. And accelerate while the others have already flat-lined. Which is the reason why Bolt is the greatest 200-meter runner of all time? Though he holds the world record in the 200, at 19.19, his disinterest in training probably precluded him from being the only man to break 19 seconds, a shame.

The man on the current track and field sprint scene reminiscent of Owens is Andre DeGrasse, The young Canadian sprinter who, at 1.76 meters, quick out of the blocks, has a running style and skill vaguely similar to Owens. DeGrasse has a 9.78 wind-aided best and an Olympic bronze medal in the 100 (and a silver medal in the 200).

All of the above is based on guesswork. But educated guesswork at that. Regardless, Owens is one of the top sprinters of all time and a top athlete. And the question posed here is a worthy and interesting one.

Olympic Bronze medalist Andre De Grasse of Canada followed on from his win in Oslo. His fastest ever 100m time, albeit with a howling 4.8 tailwind. De Grasse clocked 9.69. Five other men also used the strong wind to dip under 10 seconds. Meite (COT) was again in the top three this week in 9.84. Ryan Shields of Jamaica first time below 10 seconds in 9.89. Yunier Perez of Cuba 9.92 and Julian Reus Germany 9.99.

Andre Grasse of Canada had his first win in the Diamond League 100m this year in a very narrow 10.01. The Olympic Bronze medalist held off Chijindu Ujah (GBR) 10.02 and Ben Yosef Neite (COT) 10.03. Jimmy Vicaut (FRA), who looked good at the start, pulled up last with a hamstring strain. Adam Gemili (GBR) also had a brilliant start but faded to fourth in 10.13. 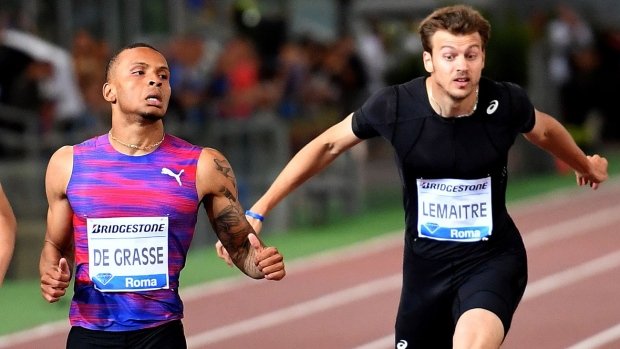 2016 Olympic silver medalist Andre De Grasse of Canada won the Rome leg of the Diamond League in 20.01 ahead of former Olympic bronze medalist Christian Lemaitre of France 20.29 and Ameer Webb 20.33 of the United States.