Alexie Caimoso with 4734 points hits the SEA Games Bronze qualification in the Women’s Heptathlon. Joining defending Champion Sarah Dequinan to the SEA Games. Currently, Caimoso is not a member of the national team. She was the only athlete in the 2-day event sponsored by Ayala Corp to breach the SEA Games, Bronze Mark, in her event.
She was 4 points over the 4730 bronze mark of the 2019 SEA Games the prerequisite for qualification for the SEA Games.
The Bronze mark was stated as a mandatory requirement by the POC President Bambol Tolentino. We will publish a list of those athletes who have surpassed the bronze mark later with the cut-off being March (no exact date specified yet) for SEA Game 2022.
Well done to Alexie Brooks and her coach Sean Guevara
The Score surpassed her previous Heptathlon mark from 2019 of 4440 Points. Alexie a Half Black Filipino is from Iloilo City.
She needed 2:37.19 on her last 800m event as minimal to score 4730 points. And she nailed 2:36.82 to go four points above that.

Congratulations to Alexie Caimoso Brooks for being chosen for the national training pool. Brooks hails from Western Visayas.

She has a PB of 1.72m in the High Jump and is the Palaro Record Holder in High Jump.

She has been nominated for the Heptathlon. This will be interesting as in the 2021 SEA Games, and there are only two slots. So she will contend with current national training pool athletes.

SEA Games Champion Sarah Dequinan and Josefa Ligmayo for the two berths at the SEA Games in Vietnam in 2021.

Brooks was also a Pinoyathletics cover athlete for some time.

Congrats to all her coaches from Western Visayas.

The Passport came with a sigh of relief for Caimoso as the timing was cutting it closer than clearing a high jump bar.

As in sir hehe I thought I couldn’t aable to play.

I even cried so much cause of that.

Since I started my athletic career I told myself to do whatever it takes to compete internationally.

Just in time for the ASEAN School Games in Kuala Lumpur which will be from 19 to 23 July in Shah Alam, Malaysia.

Addy Arca comes to the rescue ‘Good Friends from Bacolod!’

With a lot of help from her good friend Adriana Arca, Bacolod’s coach, Alexie befriended during the Palaro the Good DFA People of Bacolod, particularly Mam Carol, and her coach/mentor Noel Diel of Iloilo.

The complicated process of getting a Filipino Passport was finally accomplished.

Alexie has no contact with either of her parents. She has never met her father, and is unsure of her mother’s whereabouts was raised by her grandmother.

The bubbly black-Filipino Alexie, at one time, could not decide if she wanted to be a model, basketball player, or High Jumper. She is 5’8 in height.

Although under the mentorship of paramount Iloilo coach Noel Diel she progressed from 1.50m to 1.72m.

Diel discovered her at a Congressional meet, and she was only able to do straddle hop, but he later taught her the Fosbury Flop.

Diel is the Deal

The Zen Master Diel is no stranger to coaching talent.

Coach Diel had mentored several athletes in his many years as coach of the Western Visayas High school team, such as Ernie Candelario, John Lozada, and Rene Herrera. They went on to become SEA Games Champions as well as national high jump record holder Sean Guevara.

Alexie, in 2016 in her first Palaro in Antique, took the silver behind Cherry Mae Banatao with a 1.63m effort, with Banatao clearing 1.66m and breaking the record.

The following Palaro Alexie won in 1.65m in Antique.

She then progressed to 1.72m at a District meeting, which was well above the 1.69m

National Junior Record of Kaylene Mosqueda (also from Iloilo), but because the meat wasn’t PATAFA sanctioned, it could not be counted.

Alexie then had calved issues but still broke the Palaro Record in Vigan, settling for a 1.68m jump.

Caimoso will pair up with Evangeline Caminong at the ASEAN School Games, which has 30 athletes attending.

Adriana Arca and Noel Diel will be the coaches for the Girls. Caminong got the better of Alexie in the Heptathlon Junior Girls High Jump, clearing a recognized national record of 1.71m.

Heading into College, Alexie is still unsure if she wants to take up Business, Tourism, or something to do with sport at college.

Alexie has several offers, including Ateneo (who she represented at the National Open) but is not ruling out the possibility of studying overseas if the opportunity comes, notably a particular NCAA College in the United States which has expressed interest.

She is still in Grade 12, so she has this other year to improve on herPalaro Record.

“I hope I can break my Personal best or atleast win a medal. I just started my training last week though.”

At the ASEAN School Games Alexie will be up against some very strong opponents including athletes from Vietnam at 1.76m, Thailand at 1.74m and Malaysia at 1.72m, and of course Caminong at 1.71m.

Im very nervous cause they’re so strong but still im gonna give all my best, I do believe that God has a better plan that what we think.
Said Alexie about the prospect of competing in a field of 1.70m+ jumpers. 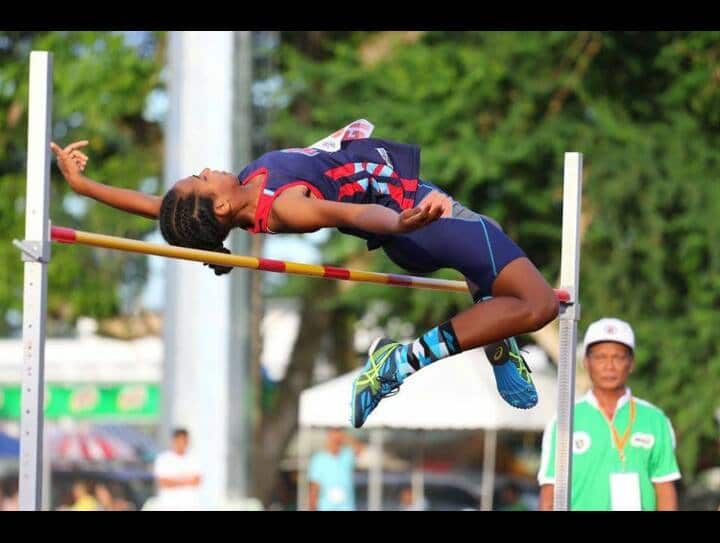 Recently crowned 2017 Palaro (National High School) Champion Alexie Caimoso of Iloilo came to light with a recent 1.72m. This was a significant improvement from the 1.65m she registered in Antique back in April.

While the 1.72m is unofficial as it was at a district meet not recognized by the PATAFA, the mark is well above the current 1.68m Junior Record.

And well, at 16, the 5’8 Caimoso has another few years to raise the Junior Record height.

Despite it not being an official National Junior Record.

After hearing about the feat, several US Colleges have shown high interest in the emerging High Jump, which still has the 2018 and 2019 Palaro before she graduates.

16-year-old Alexie Caimoso Brooks soared to a new PB of 1.72m in the High Jump.

And on December 6 at the ISSC Meet in Iloilo. Taking the gold. Most noteworthy, the ISSC is the prerequisite for the Western Visayas meets scheduled for February next year.

In contrast, the 5’8 Ilongo beauty queen is the Palarong Pambansa Champion in Antique 2017 and cleared 1.65m in April.

Most noteworthy, the mark of 1.72m is the #2 best-ever performance by a Filipino Athlete. While the National record of 1.81m set in 2005 belongs to the recently retired Narcissa Atienza.

Atienza went on to become multiple medallists in the SEA Games Heptathlon over the years. While Caimoso also surpassed the 1.68m National Junior Record of Kaylene Mosqueda set in 2016 and 2017 at the weekly relays and UAAP.

Mosqueda also came through the Iloilo system but is now at FEU in Manila.

Unfortunately, as the performance was not at a PATAFA sanctioned meet, the record cannot be counted for Record purposes.

She needs to leap 1.82m to qualify for World Juniors. In contrast, Alexie Caimoso Brooks is still young enough for the 2020 World Juniors.

Its ok I will probably jump higher than that at the right time. Said Alexie Caimoso Brooks.

And his assistant, Mr. Roland Consular.

While Alexie has had several offers from UAAP Schools Ateneo, UST, and UP. She is quite keen to complete her last Palaro year in Grade 12.

With the Zen Master in Iloilo before deciding on a college.

Caimoso is an orphan and was raised by her grandmother and Aunt.

Also, she is of mixed heritage, being a black Filipino.

Pinoyathletics.info, in its quest for a fairer selection of athletes for the national team, will be publishing a list of PATAFA September Recommendations with the current standing for 2017 of each athlete it has/had recommended.

Alexie Mae Caimoso of Iloilo took the Palaro Secondary Girls High Jump title with a leap of 1.63m. However, Alexie was the runner-up last year to Cherry Mae Banatao of Cagayan Valley.

In contrast, Banatao, who broke the Palaro Record last year with a leap of 1.66m this time, settled for silver with 1.60m.

Additionally, 16-year-old Alexie was not lining up for the Sea Youth Championships last month in Ilagan.

Banatao, who competed there, was fourth in 1.59m. Having black American blood, the 5’8 Alexie is a mixed-race Filipino.

She is also an honors student at Buga National High School in Iloilo.

Alexie, who is just 16, has two more years in the Junior Division to compete against Banatao, who is also the same age.

Very thrilling to see how far these girls can raise the Palaro record by the time they are done. 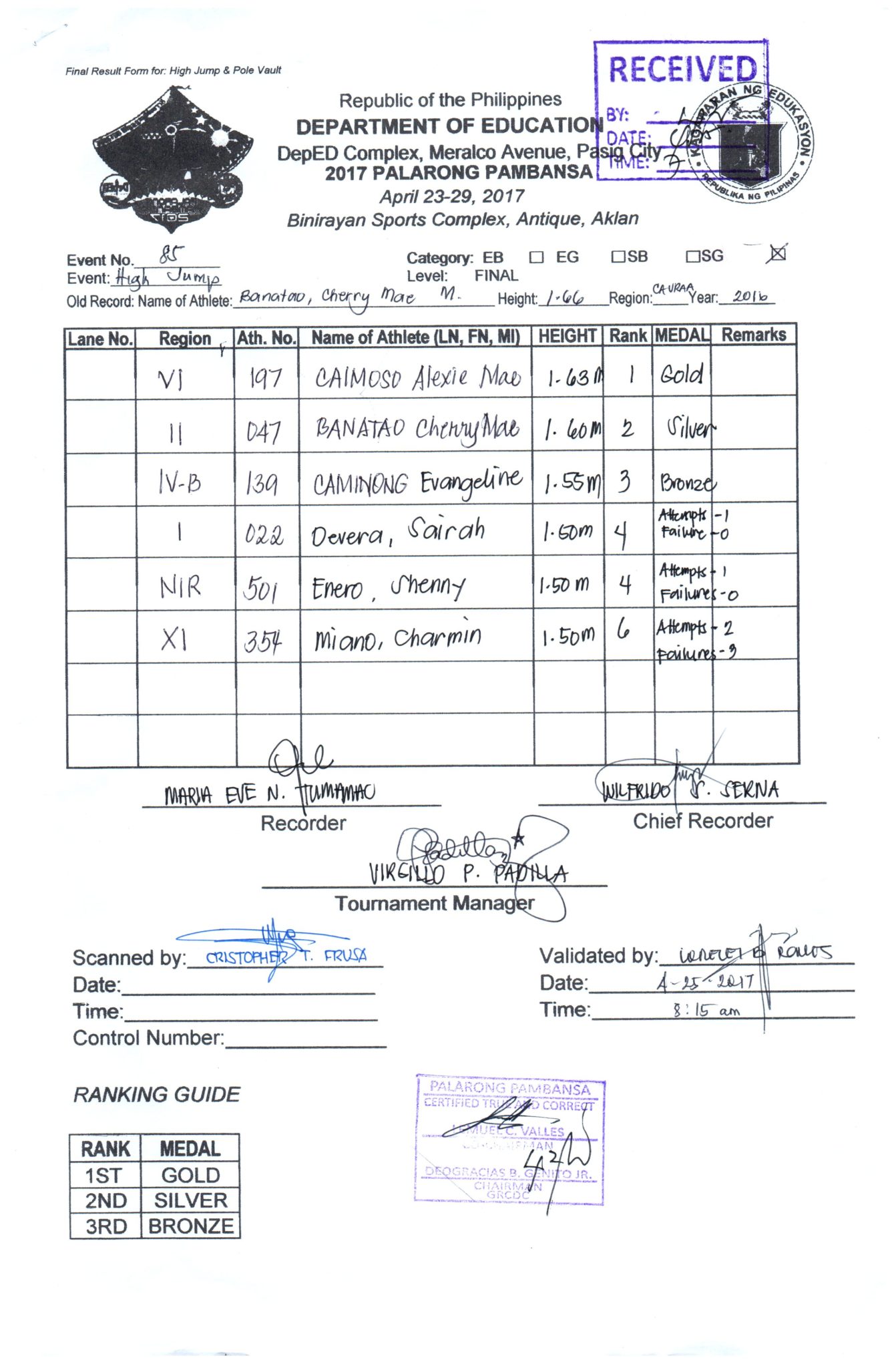