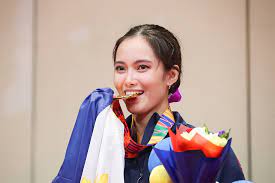 After John Chicano’s first gold of the games going to the Philippines.

In the first event to be decided in Wushu.

In contrast, Agatha Wong was the bronze medalist at the 2018 Asian Games in this event.

“I feel relieved, because finally I’m done with my first event,” Agatha Wong said after winning the competition. “I’m really happy to deliver something the Philippines is proud of.”

In contrast, the Philippines has already tied the 1 Gold it won 2 years ago in Kuala Lumpur. Winning just a total of 2 medals a 1 Gold and 1 Silver, which it hopes to far surpass as the hosts.

However, looking back at previous results, the Philippines had 1 gold in 2015, but it had 3 in 2013. When the Philippines hosted in 2005, it proved a gold mine in Wushu with 12 golds delivered.

Agatha Wong overcame injuries to win the third Bronze at the Asian Games.

It came in women’s taijiquan, and taijiquan all-around competition Wushu, another martial arts medal after the Philippines delivered two yesterday in Taekwondo.

Above all, Agatha Wong, the SEA Games Champion in this Taijiquan and SEA silver medalist in the Taijijian. They finished with 19.36 points.

Chinese wushu athlete Sun Peiyuan won the first gold medal of the Asian Games as the Olympic heavyweights made a fast start in their quest to top the medals table on Sunday.

Taolu specialists Hazel Dalisay and Faith Liana Andaya secured one silver each in the girls’ Group C category of the tournament, which drew more than 500 athletes from 80 countries.

*Please note that Group C does not degrade the field’s quality; it merely designated the type of event. E.g., in Athletics Throws, Distance, Sprints.

*World Junior level medals are considered equivalent to senior awards at the next rung down, the Asian Games. It’s looking like Wushu may have more qualifiers for the following SEA

Games. They had a 100% medal return last SEA Games. All 9-10 of their athletes obtaining medals. Wushu won three golds. It’s good to see emerging talents in this sport.

The other team members who failed to make it to the podium were Agatha Brystenzen Wong, Vanessa Jo Chan, Alieson Ken Omengan, Joel Casem, Christian Lapitan, and Dave Dagala.

*Will also analyze the Philippines’ non-medalists to see if they finished in the top six in their events.

The official results are not available yet as the competition is in progress.

The Philippine Wushu Federation is gearing up for four more big tournaments The 2nd  Youth Olympic Games in August in Nanjing, China, the 2014  Asian Games in September in Incheon, South Korea, the 6th World Traditional Championship in October in China, and the  1st World Taijiquan Championship in November also in China.