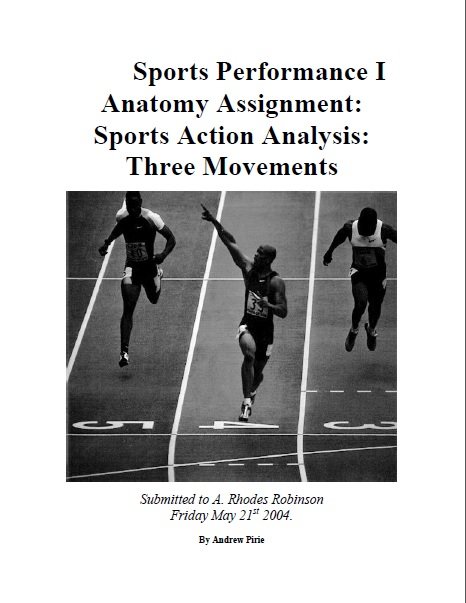 Then on the command “Go” or when the gun is fired the athlete reacts by lifting the hands from the track, swinging the arms vigorously, and driving with both legs off the blocks and into the first running strides. After the go command, this leads to the Acceleration phase.

The sprint start involves all the bones in the entire lower body, in particular, the appendicular skeleton as the limbs are utilized a lot more than the axial skeleton.

While the arms are thrown back and the legs are pushed against the starting blocks.

The movement is much like doing a power clean with weights.

The reaction time of the sprinter which is usually around .1 – .2 seconds. While this is the amount of time it takes the sprinter to leave the blocks after the gun is fired.

Also, it is more of a physiological response.

Yet it involves the arm accompanying your front leg being abducted in a backward motion. And at the same time, the trail leg (the more powerful leg) extends forward with the calve muscle straight and the humerus being bent at the knee.

While the second step involves the same movement with the opposite leg and arm.

0-15m Athlete starts pushing out of the blocks staying low.

The sprinter comes out of the blocks and gradually comes up to an almost erect position over 15-30m varying on the athlete.

While Continuous abduction and adduction of the Triceps and Deltoids. Continues with the arms bent at the elbow driving down towards the hips.

Therefore The hamstrings, glutes, and quads continue to control the movement of the legs.

And the step length is slowly starting to increase about ½ a shoe length each step taken.

Also, the feet are not dorsiflexed or plantarflexed at this stage and should remain flat, as it would weaken the power generated from the start. While the spine is naturally abducting away from the trunk at this stage is taking place.

Once the Transition phase is finished. Therefore the sprinter will be in an almost upright position. Maintaining a 10-degree lean forward.

The feet should by now around 30m into the race are starting to dorsiflex. After the drive phase, the runner transitions to the maximum velocity phase.

At this point the runner becomes fully erect in his posture, standing tall without his hips lowered.

As the name suggests, the runner achieves his maximum speed in this phase, maintaining it for as little as 10 to 30 meters in the 100-meter dash, or as much as 200 meters in the 400-meter sprint.

Once into the position maintaining 10-degree and the acceleration is over usually by 40m at the most an efficient running style, which involves the elimination of any possible defects such as back kicking is introduced.

This skill is hard to learn but can be learned through a series of sprint drills that emphasize the correct movement.

The ankle is Dorsiflexed and the leading leg is extended forward with the calf bent at the knee underneath the hamstring and quad.

While the trail leg appears to be extended backward if shown in slow motion. Hence only appears so as the front leg is being abducted from the trunk.

Also, the back ankle also looks like it is being plantarflexed but is actually resting on the ground by the phalanges of the foot.

Hence the same process is then repeated with the other leg.

And the arms their motions as explained before but drive up to below eye level instead of down towards the ground by this stage.

After striking forward the lead leg comes down straight not backward. And the other leg comes forward.

Also then brushes against the ground the ankle remaining in its dorsiflexed position.

And naturally, the calcaneus adjusts to a flattish position when it impacts the ground.

While the hamstring and quads are driving the calves and ankles in a scraping drag along the ground.

Also when the leg comes back from scraping the hamstring flexes back up and passes beneath the gluteus in a bicycle-like motion. It then goes back to a grab position.