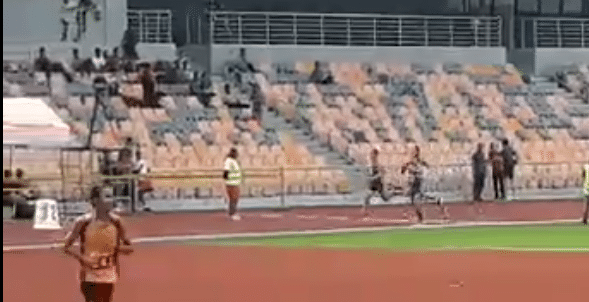 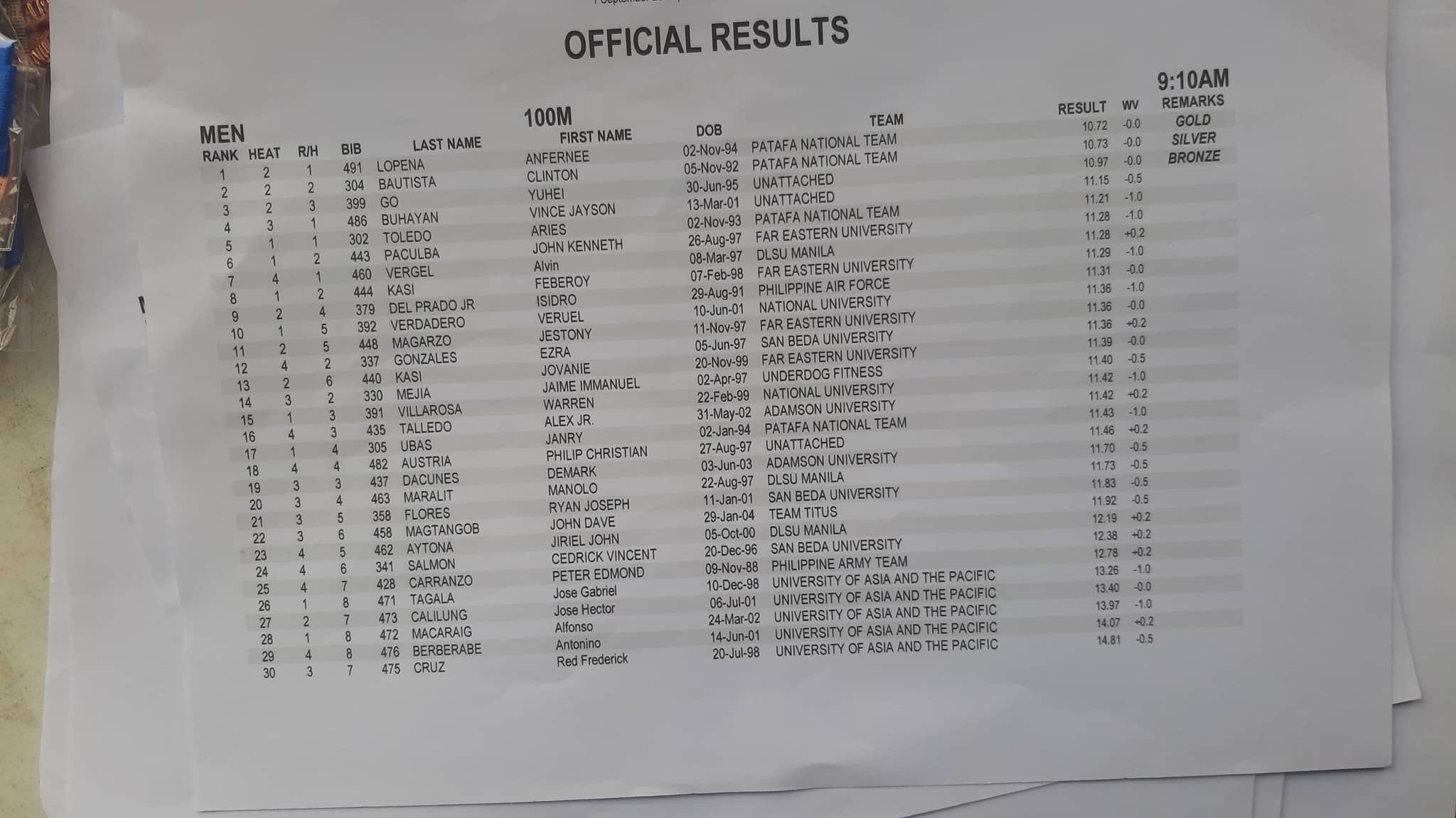 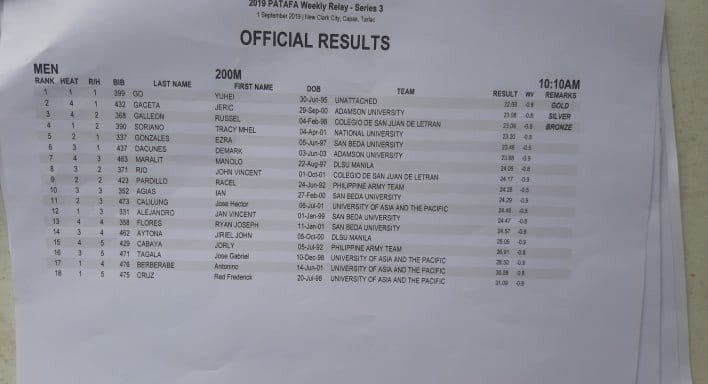 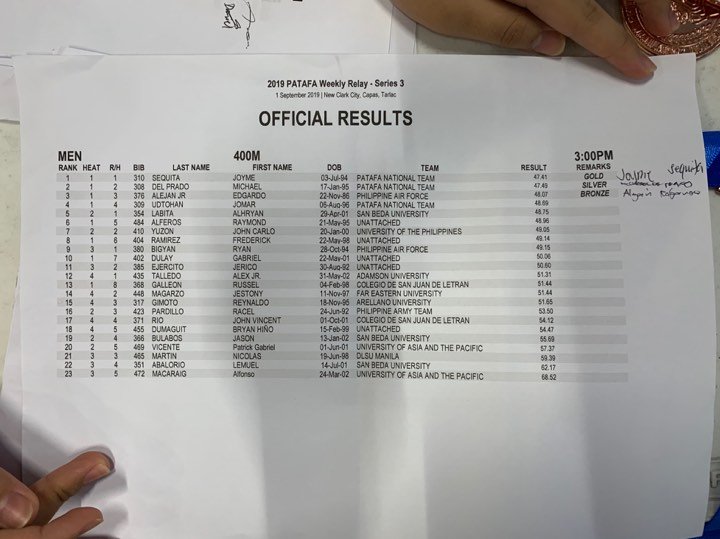 The Weekly Relays, held on September 1, mark the end of the qualifying period for Philippine Athletes to the 2019 SEA Games. After that, it’s basically pens and papers down; pass your work to the front of the class for many coaches.

Some Events of interest will be the 400 Men’s and 1500 Men’s, which we will do our utmost to live stream.

Firstly 1500 is of note, with stronger non-national athletes vying for SEA Games Spots.

Quite an interesting race with the 5x SEA Games Silver medalist Mervin Guarte lined up. He is also the National Record Holder, National Junior record holder, and current national champion. Joined by his training partner Sony Wagdos a former PRISAA Champion. Aries Africa national silver medalist, and Univ of the Phil Duo of Giron Jr. UAAP Champion and Masano the National Junior Champion. Mancao is the 2018 ASEAN School Games Silver medalist, and Carado is the weekly relay youth champion. Braza, the National HS Champion, withdrew from the race to focus on school work. 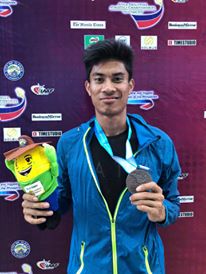 Again another interesting race will be a case of #watchandlearn—quite an interesting field of athletes aiming for the coveted 4x400m relay spots. National and UAAP 400m Champion Joyme Sequita, Jomar Udtohan, has the #3 time in Southeast Asia this year. Former national champion Ryan Bigyan, NCAA 200m Record Holder Russell Galleon. Popular Actor Jericho Ejercito. NCAA Champion Reymond Alferos. 4×400 SEA Games gold medalist Mico Del Prado, National 400 Hurdles champion Francis Medina. Also, of interesting note, there are 9 lanes at Clark. So if any more athletes turn up, it could be an A and B Race situation.

Results of the Weekly Relays held Sunday, August 4 in Lingayen, the same as the July opening leg a tiny turn out of 80 athletes or less. With very minimal participation from nearby schools.

Report coming. Would you please watch this space?

Would you please email photos or videos of this event to [email protected]?

The website has been offline for the last 24 hours due to our server host experiencing issues.

Apart from William Morrison (who we will have a separate section on once we get a copy of his passport sent to [email protected]).

This report comes late as we were waiting on the outcome of the Vietnam Open before proceeding with any such write-up. However, now that there has been a continuation of lackluster results for several meets in a row, it’s time to bring this to attention as we are now drawing 4 months until SEA Games.

Low Turnout at the PATAFA Weekly Relays in Lingayen

The first leg of the PATAFA Weekly Relays in Lingayen was a disturbingly low turnout with 60 or fewer athletes. Mainly the ones staying in the training camp in Lingayen from the National Team showing up. Only one small team from Manila bothered to show up. A small makeshift band of boys from the University of Asia and the Pacific.

In fact, hardly any local athletes from Lingayen showed up to the meet, held July 6 at the Narcisco Ramos Stadium in Lingayen, Pangasinan.

Gone are the days when the weekly relays attracted a total of 2300 athletes registered in 2015.

For 3 months, the local-based athletes had been training there.

With Free Food courtesy of the governor of Lingayen.

Not a Single Personal Best Set

Very disappointing results by the PHI-athletes on 6th July; maybe 10.65 at 100 m by Lopena could be valued  as the best result (in addition to the SP) – as per Asian Athletics correspondent.

This is echoed because not every athlete at this meets in the national pool competing set a personal best.
We have now resorted to the cliche “At least it’s a Seasons Best” Far too often while other SEA Nations make Personal best bare minimal benchmarks. And even set multiple National Records or even SEA Records in 1-2 year cycles.
Not a single athlete except William Morrison (who trains in the States). I even was able to reach the 2017 SEA Bronze mark in any event at this competition.
For a Gauge of Top 10 in 2019, South East Asia Performances check here.
Only Amarga, Pamatian, Mariano, and Mantua produced season bests in their events of the National Team Athletes. In addition, Mariano and Amarga had opening performances as they had not registered times previously to this.
To top things off, quite a few of the local-based national team/training pool are injured and did not participate.
To be Followed up in the next article, Hit, and Miss at the Ho Chi Minh Vietnam Open.