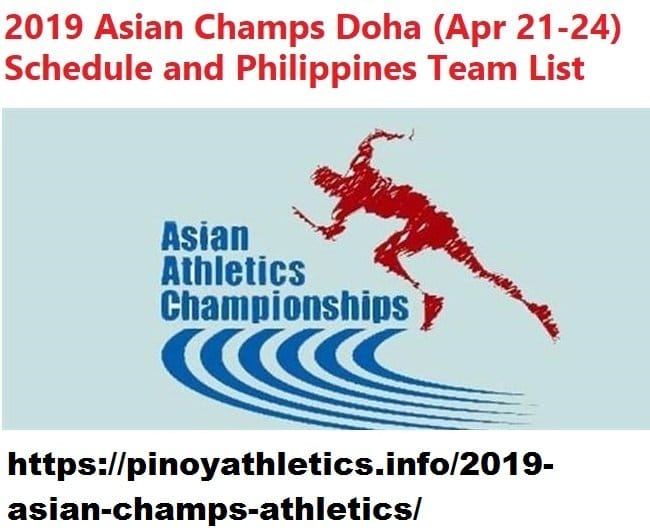 As now out of time for Asian Rankings Preview and Updates, here is who in action tomorrow.

Japan’s Yoshihide Kiryu is the top-ranked man with 10.08, Kiryu’s best achievement outside of the 4×100 was his 2014 Bronze Medal at the World Juniors.

Kiryu is a sub 10 man, having run 9.98 in 2017, and is the Japanese National record holder, having broken Koji Ito long-standing national record for a long time, the Asian Record. World Junior Champion Lalu Zohri (PB 10.18), the fastest man in South East Asia from Indonesia, has run 10.20 so far this year. Zohri looks relatively easy with a rather sluggish start but mowed down his opponents at the Malaysia Grand Prix a few weeks ago. Perhaps the 9.91 Asian Record of Femi Ogunode of Qatar will be strongly challenged by Kiryu.

The Topman is 400 Hurdle world record holder Abderrahman Samba who has already timed 44.60 this year. The Bronze and Silver medalists from India at the last Asian Games, Arokiarajiv and Yahiya of India, have run 45.73 and 45.89.

Qatari occupy 1-2-3 slots in this event. Abdalla of Qatar, the Asian Games Bronze Medalist, leads the rankings with a time of 1:45.60. Hairline 2017 Asian Champs silver medalist has run 1:46.22. Hassan. Fil-Heritage middle-distance runner Carter Lilly has clocked 1.48.95 this year, which ranks him 9th in the Asian Rankings (7th based on the 2 entries per country rule). Unfortunately, Carter is not available for Asian Champs due to other commitments.

Instead, the Philippines will enter SEA Games Silver Medalist Marco Vilog, whose 1:51.63 ranks him 34th in Asia for 2019.

The Chinese are once again at the head of the Asian Hurdling world.  Wen-Jun Xie, the 2014 and 2018 Asian Games Champion, leads with 13.46.  Asian Games silver medalist Kuei-Ru Chen of Taipei ranks #2 with 13.68.  SEA Games Champion Rayzam Shah Sofian of Malaysia ranks #7 with 13.82. And in #12 is Clinton Bautista of the Philippines, the SEA Games bronze medalist with 14.18 so far this year.

Defending Asian Champion Eric Cray is yet to run 400 Hurdles this year, as is Favorite Abderahman Samba of Qatar.  This years fastest is Dharun of India, the surprise silver medalist at the Asian Games.

The other Filipino in this event, Francis Medina, ranks #19 with 51.52 this year.

Were invited but declined to join due to other commitments 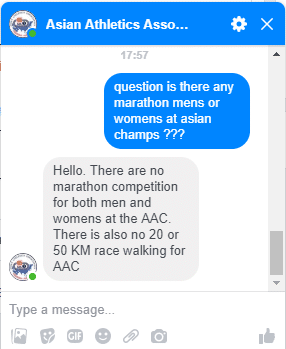 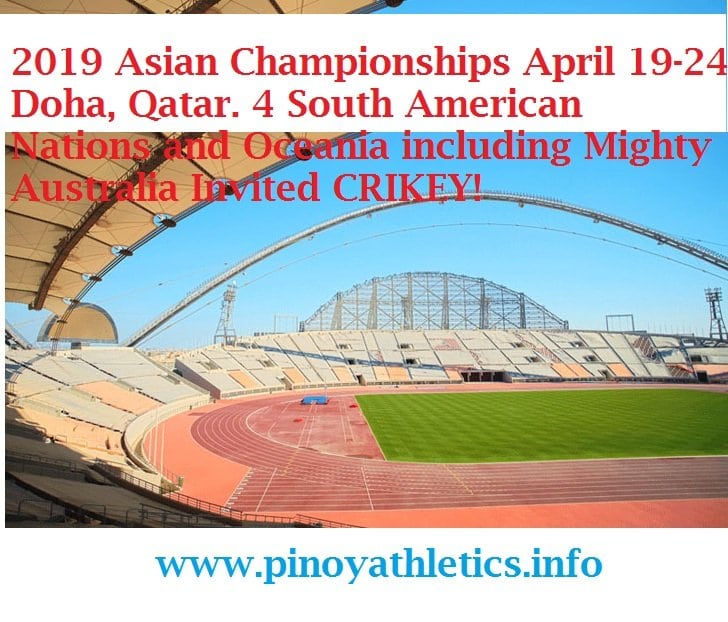 There have been talks for years of Australia and Oceania nations joining the Asian Championships. Australia is already part of FIFA Soccer qualifying in the Asian sector. The organizers have also invited four South American countries to compete as they want the Asian Champs in Doha. To serve as the dress rehearsal for the World Champs, which will also be held in Doha. Doha is in a unique position with its Multi-Billion dollar sports complex and facilities of hosting both the Asian and World Champs in the same year. Also interesting to note is North Korea and Unified Korea are separate teams.

As per the website, the actual competition dates will be April 21-24