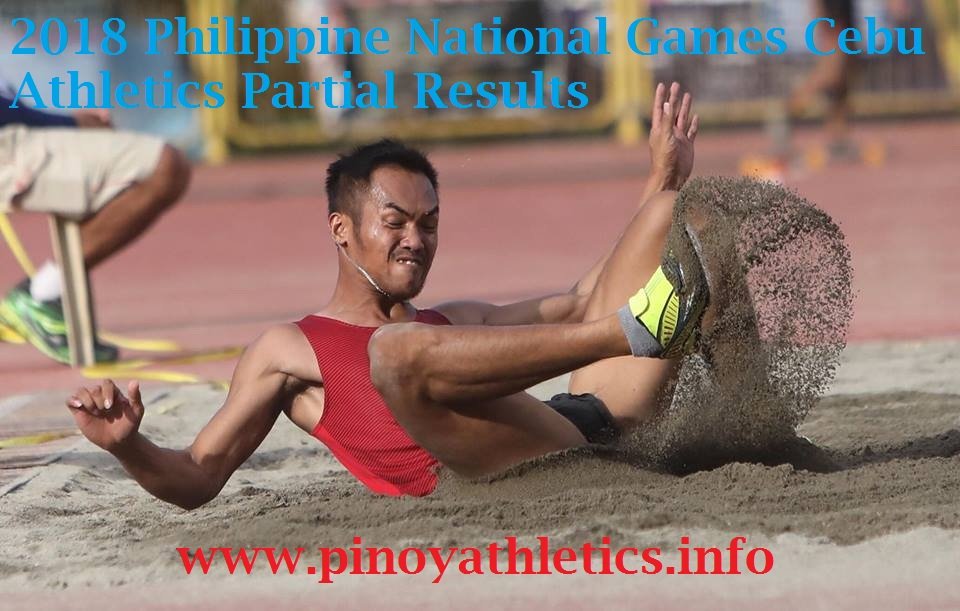 I have not been provided with the Full Results of the 2018 Philippine National Games Athletics in Cebu. If you have the Full Athletics Results, Swimming, Weightlifting, Cycling or Archery please kindly email it to [email protected]

The Philippines Sports Commission, via their PSC Website, Facebook Page, and Social Media Channels never made this available to the public.

In light of this, I have gathered and posted partial results from various sources.

Also to view a list of PNG Meet Records in Athletics, I have compiled of course if I had full results of the PNG I could complete this project.

*All Performances need to be verified

Rosie no spring chicken but still got it

Villarito who has been in the national team for almost 20 years is no spring chicken and hopes to one day go into full-time coaching. She will match up against her key rival and successor Evalyn Palabrica at the National Open in Ilagan next week.

“2019 SEA Games in Philippines will probably be my last. I’m hoping some more younger athletes will come through.” said Villarito hoping for the continued success of her event after her retirement.

NCAA Champion Reymond Alferos won the 400 meters in 48.82 easing up the last 60m to win over Caido. While Edgardo Alejan a member of the national relay team pulled out after the heats due to the flu. Alejan had run 47.87 at the Singapore Open where he had finished with silver last month. Alferos is coached alongside PRISAA Champion Joyme Sequita and 2017 National Champion Ryan Bigyan.

By Coach Ernie Candelario of the Philippine Airforce a former national coach and 2001 and 2003 SEA Games Champion in the 400m. It will be a very interesting matchup at the National Open next week in Ilagan as Coach Ernie’s athletes will take on all of the members of the national team based in the Philippines.

Palaro Girls 400 Hurdles Record Holder (1:01.5 hand-timed) Riza Jane Valiente of Bohol added the PNG Girls title with an electronic time of 1:02.57. Which is the fastest time in the country for 2018? Valiente narrowly edged out Bernalyn Bejoy of Negros (1:02.67), who was second behind her the last 3 Palarong Pambansa’s.

Riza Jane now clocking an electronic time, is the nearest qualifier to the World Junior Standard. With no athlete hitting the standard and the deadline being on June 24. Valiente will now proceed to the national open championships next week in Ilagan where she will be up against UAAP Champion Marilyn Avila who has clocked 1:02.60 back in February.

Riza Jane is entered for the ASEAN School Games, unsure if entered for Asian Juniors in Gifu. Valiente pulled out of the 400m Girls, with Bejoy winning the event.

Giron outruns two members of the National Team in 800

It was an interesting outcome in the Men’s 800m with Edwin Giron Jr. the 2017 Palaro Champion, winning the junior division and running a faster time than two members of the national team in the Men’s. Giron timed 1:55.58. While SEA Games silver medalist Marco

Vilog, who is preparing for Asian Games timed 1:56.05, and Elbren Neri timed 1:57.22. Giron is lined up for Asian Juniors he is coached by Fernando Dagasgas of Cavite, but originally from Zamboanga City. 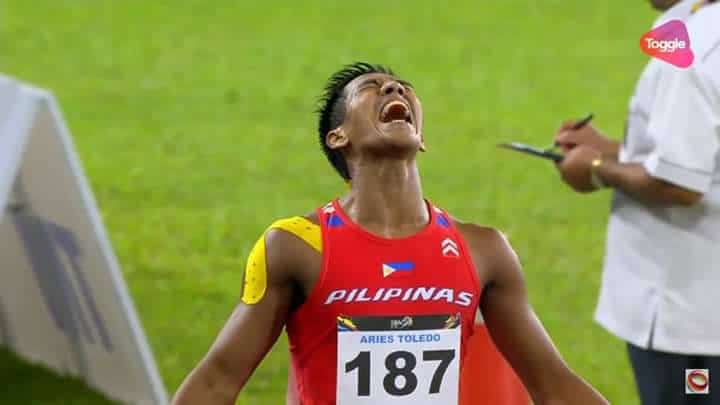 There is no doubt that the star of Day 1 was SEA Games Decathlon Champion Aries Toledo who has made breaking PB in individual events a habit this year. Toledo who emphatically claimed the scalp over the much-fancied Asian Champion Sutthisak Singkhon of Thailand in Kuala Lumpur last year. Representing Nueva Viscaya first up was the 110 Hurdles for the 25-year-old.

Meanwhile in the Long Jump the return of Julian ‘Happy Clowns’ Fuentes who had a big season-best of 7.56 meters, outside of his personal best of 2 years ago of 7.69 meters. Fuentes who was hard done by to miss out on the 2015 and 2017 SEA Games in the Long Jump claimed the National Games title en route to a showdown with SEA Games bronze medalist Janry Ubas (who will compete in Taipei) at the national open in Ilagan next week.

Aries again broke his personal best in the Long Jump with a 7.50m leap, improving it from 7.35m at the beginning of the year. This racks up very valuable points for him in the Decathlon, in which he will participate in the Asian Games this August in Jakarta. National Junior Record Holder Jerry Belibestre of Negros took the bronze with a 7.37m leap.

Lopena barely holds onto the 100m Title at the PNG

2017 National Open Champion Anfernee Lopena narrowly won the 100m title in Cebu at the National Games. Lopena who nearly fell over at the start. Stopped, and then started again with his momentum completely broken. Was 5 meters down on Michael Mana-y of Negros. Lopena clawed back and only just managed to pip Mana-y on the line (10.96 to 10.98).

William Galceran of Northern Mindanao took Bronze (11.05). Palaro Record Holder Kasi Feberoy of Koronadal was fourth. Lopena timed 10.96, he did, however, time a season-best of 10.71 in the heats.

It was somewhat of a homecoming for the 24-year-old who suited up for his hometown of Tagbilaran, Bohol. Its a nice thing at the PNG that the athletes run for their home provinces or towns and not for schools or companies. It would be great if all athletic meets could be like this in order to give a sense of rationalization. Lopena who was a student at Recoletos in Cebu, before it shut down its athletic program in the first year. Was endorsed by yours truly to the College of Saint Benilde.

Article from PSC edits and corrections by Andrew Pirie.

Proving her familiarity of the track is veteran sprinter Cristabel Martes, who bagged the first gold medal in the 10K-meter run of the 9th Philippine National Games today at Cebu City Sports Complex. The 39-year-old beat off her younger rivals securing the National Games title.

The former 2001 Malaysia and 2005 Philippine Southeast Asian Games gold medalist in the Marathon offered her win to her family and is eyeing to duplicate her success in the 23rd Jeju International Tourism Marathon Festival in South Korea on May 27th. Martes is a four-time Milo Marathon Champion.

While the time is far from her national record of 36 minutes and 40 seconds. Martes these days focusses more on the Marathon. The countries #2 behind Mary Joy Tabal. 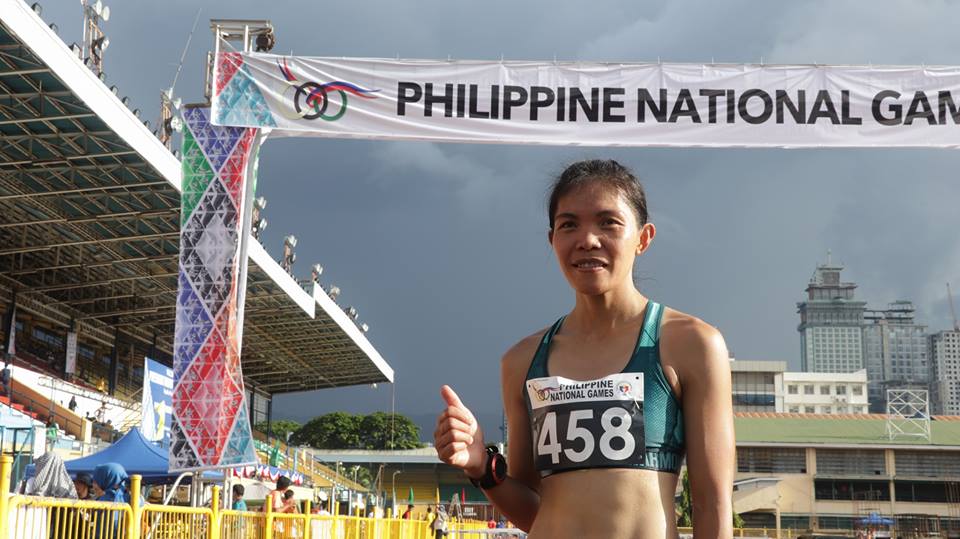 Another former national athlete and now UST Coach Nars Atienza, who is also 39 years old won the Women’s Shotput. Nars representing Baguio City and originally from Batangas who trains with her athletes hurled the shot put 12.25m. Which is the best performance of the year, as the winner of the UAAP threw 12.12m.

While Rogelio De Borja of Arellano took the Men’s Shotput in 12.49m as #1 John Albert Mantua is in Taipei.

The first event of the 2018 National Games in Cebu, Philippines. Athletics 110 Hurdles men’s has been postponed from this morning to the afternoon as it will be a straight final.

National Record Holder and 2015 SEA Games Bronze medallist Patrick Unso. Will make a comeback after a long hiatus of back and hamstring injuries. Patrick Unso holds the national record at 13.91 last year at the Thailand Open and has not raced for nearly a year. Also in the field will be SEA Games Champion in the Decathlon Aries Toledo who recently improved his 110 Hurdles time in  Thailand to 14.67. Also lined up will be Michael Manay of Bacolod a former University  Champion who has a PB of 14.7 (ht). Meanwhile, SEA Games 2017 Bronze medalist and national champion Clinton Bautista will be competing in the Taipei Open.

The 2018 Philippine National Games. Will kick off tomorrow in Cebu City. The event has drawn athletes from all over the country in Athletics. The event has been rescheduled consistently for 12 months.  The opening ceremony took place today. The PNG which has run since 2010 in its modern incarnation is the Program of the Philippine Sports Commission.

Having completed legs in Visayas, Luzon, and eventually Mindanao over the last 12 months or so. There is a widespread of athletes from around the country participating in this event.

Of note in this meet, athletes compete for their LGU, Town or Province. Not for their school team, military institution, or national team.

With a lot of completions closely clumped together. Having the Thai Open, Malaysian Open this month already. And then the Taipei Open May 25-26 which overlaps the PNG. And National Open in Ilagan on May 31-June 2. Athletes have had to pick and choose meets.

All National athletes except the 13 going to Taipei Open will join the PNG. Although the event list is not available. Among the 13 Marestella Torres, Michael Del Prado and Rone Malipay are being sent to Taipei. It was advised the PNG will use electronic timing.