Riza Jane Valiente of Bohol. Not only defended her Palaro 400m Hurdles Title. She also smashed her own meet record.

Most noteworthy, according to the DepEd listings, the record belongs to Rochelle Jalabrica of NCR set in 1994 at 1:00.5. While this is quite impossible as the National Junior record is 1:01.07 by Jenny Rose Rosales set in 2015. And on checking the 1994 Palaro results.

Yet Jalabrica time was actually 1:05.0, and a typographical error has continued through on the listed record. Also, in my listed data, no performance below 1:05.0 is credited to Jalabrica.

While Looking at all Palaro marks.

So the previous fastest ever time in the Palaro is actually the 1:03.1 established by Valiente at the 2017 Palarong Pambansa in Antique.  While Valiente. 18 registered a time of 1:01.5, which is only behind Jenny Rose Rosales’s junior record of 1:01.07 on all-time junior lists.

Also, the time was  #9 on the all-time list for Filipino Women in seniors.

Especially relevant is that at the Palaro, they did use the same height as the women’s. Yet it was an impressive race with Valiente taking the title in this event for the third year in a row, holding off SEA Youth Silver medalist Bernalyn Bejoy, who was silver to her last two Palaro’s.

Consequently, Bejoy was dragged through to a new personal best of 1:01.9, improving on her 1:02.64 winning time in the Western Visayas meet and 1:03.05 clocking at the SEA Youth.

High School Girls #1 and #2 in the Country

It’s important to note Bejoy and Valiente, who is coached by provincial coaches. Have both now surpassed the performance and lifetime best of UAAP Champion Marilyn Avila of FEU, a member of the national team who timed 1:02.60 in February and has a career-best of 1:02.22

Valiente has already debuted for the Philippines at the ASEAN School Games last year, finishing 4th. Valiente time is below the 6th place finish of the 2016 Asian Juniors 1:01.77.

2018 Palarong Pambansa: All that Glitters is Veruel defends Palaro Titles 100 and 200 (videos)

Veruel Verdadero defended both his Palaro Titles in the 100 and 200. The 17-year-old from Dasmarinas still has one more year left to play in the Palaro.

Veruel timed 10.6 hands, which is the new hand-timed record for the Palaro. With Kasi Feberoy clocking 10.75 in Antique in 2016. The performance saw Veruel take command of the race and win very easily over the upcoming Vince Buhayan of Iloilo (10.9) and David Granadozo of Cagayan (11.1).

Although the official national record 10.74 (electronic timing) is still held by Daniel Noval, set at the 2012 Thailand National Open.

Veruel’s time of 10.6 (no wind gauge) rates among one of the best hand time performances by a junior.  With Waldy Soguilon 10.3 during 2002, Weekly relays as the best time. Jugueta ran 10.4 in 1994. Marvin Lee Sarandona and Lindley Navaja ran 10.5. Bayaban, Abangan, Pasante, Penarubia, Tanhueco, Gallebo, and Noval had all registered 10.6. The time according to my records, is the best hand time ever run by a 17-year-old Filipino.

Please note, as reported in this article, 10.6ht was a hand-timed national record. Data shows otherwise.

Lumapas is the MVP of Palaro Athletics (videos) 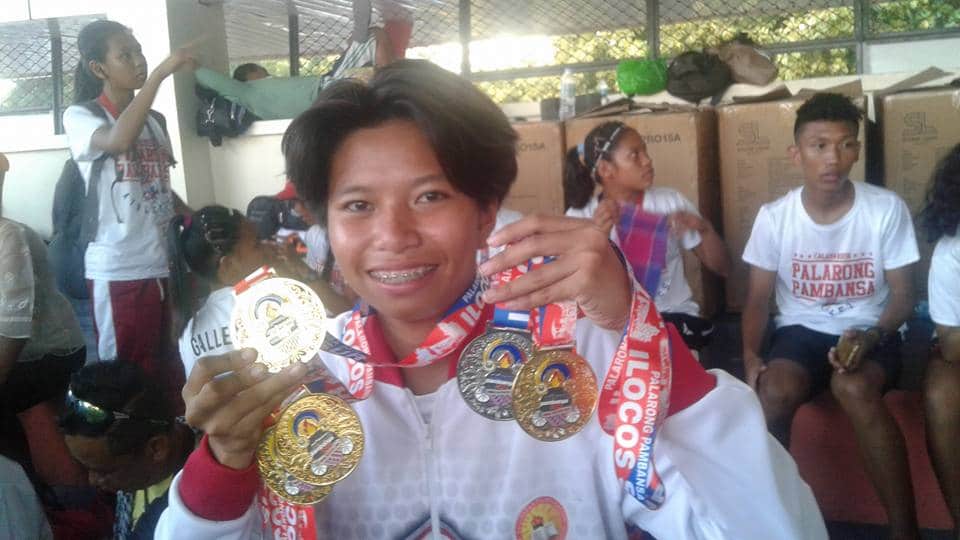 Jessel Lumapas of Calabarzon was the most medalled athlete of the 2018 Palarong Pambansa. She earned 4 Golds and 1 Silver medal. And in the process, I tidied up 2 Palaro Records.

In her last appearance in the Palaro, the 18-year-old from Cavite was in control of all three of the sprint events. Lumapas who had taken the scalp of Palarong Pambansa Record Holder and champion Samantha Limos (formally of Cebu now studying at Brent) during the regional meet (12.54 video time) en route to the Palaro.

Before this race, Lumapas’ best achievement in the 100m was a 5th place finish in Legazpi in 2016.

Lumapas also notched up a win in the 200 meters, timing 24.7, just shy of the 24.6 she ran at the STCAA Regional meet. Just outside the meet record of the controversial Nancy Navalta of Central Luzon(24.5). Niala took silver in 25.2, with defending champion Combate clinging on for the bronze in 25.6.

For many, the Memories of the 2018 Palarong Pambansa in Vigan. It will be the year that many Palaro Records, 17; in fact, some that had stood for over 20 years, came crashing down. The spectacle definitely continued with Lumapas ending her Palaro career by smashing the current record by over a second. Lumapas timed 56.3, which passed the 2011 Meet Record set by Jenny Rose Rosales, also from Calabarzon. Rosales, who went onto the University of the East, still holds the 400m Record at the UAAP.

Lumapas fully controlled this race from start to finish winning by nearly 20 meters in front of last year’s silver medalist Divina Mahusay of Bicol 58.5, and Riza Jane Vallente of Bohol 58.9.

The 18-year-old from Dasmarinas East Integrated High school rubbed out the long-standing record of Michelle Patasaha (14.9) of Zamboanga City, which has stood since 1996. Patasha stood 5’8, while Cuyom just stands at 5’3.

The record had eluded UAAP Champion Michelle Palmares, who had clocked 15.0, and Karen Janario, who went onto becoming the National Junior Record Holder (14.52), among many of those who tried and failed to break the evergreen mark.

Not to be outdone, Cuyom came back a few days later and reduced her now own record even further with a 14.5 run in the finals. Leaving Ellah Sirilan of NCR 15.2 and teammate Evangeline Caminong in 15.4, gasping for air. Cuyom took the bronze medal in this event last year. And her biggest win up to this was probably the 2016 Batang Pinoy Title. She won an international medal in 2017 in the SEA Youth with a silver.

The National Junior Record is currently Held by Karen Twiste Janario, set in 2014 at Marikina when she was silver in the ASEAN School Games of 14.52 (we do not list hand-timed national records for this event). Cuyom 14.5 is worth around a 14.74 in electronic timing conversion. The mark was a big improvement on her previous Personal Best of 15.65. 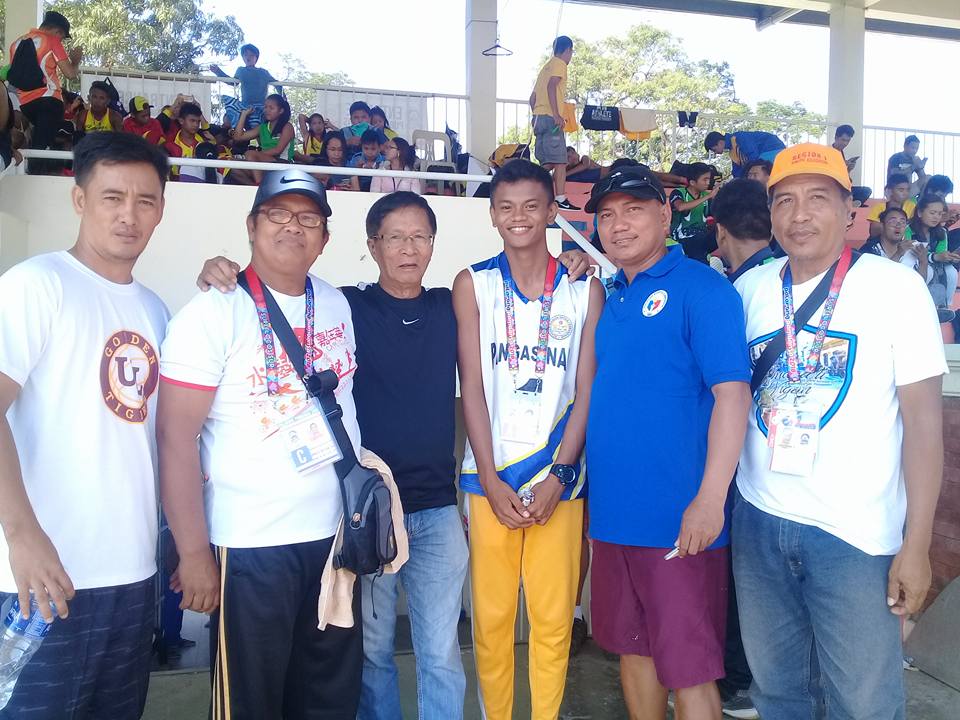 Kent Brian Celeste photoed with his coaches and Coach Pines Lim of Arellano.

Kent Brian Celeste of Ilocos Region helped himself to the Palaro High Jump Record with a leap of 1.99m. Celeste surpassed the record of Alexis Soqueno of Western Visayas, who jumped 1.95m three years ago in Tagum. Soqueno who also a very accomplished hurdler with a silver medal in the 2015 SEA Youth Championships before walking away from the sport altogether.

Celeste was the runner up last year in Antique with a 1.90m leap. Also bumping themselves over the old record was Ernie Calipay of NCR, who leaped 1.96m; he was the bronze medallist last year. Odra Delos Santos of Mimaropa took the bronze with 1.90m.

While super impressive, no one has in recent memory got near the impenetrable National Junior Record of Fil-Heritage athlete Luis Juico which still stands as a monstrous 2.16m nearly 29 years later.

Celeste and Calipay performances rank them #6 and #8 on the all-time junior lists for Philippine High Jump. And at 17, he will still have a few more years to improve that standing and maybe his Palaro Record next year in Davao City. Celeste is a student from Anda National High School in Pangasinan.

The Walkathon is now in its third year of active service at the Palarong Pambansa. Introduced in Legazpi in 2016. The 2K Walk is fast becoming a popular event for boys and girls.

In Vigan, the event steamed up even more when defending Palaro Champions dramatically lost their titles. In the boy’s Walk, Bryan Oxales, the record-holder, was favored to win the event. Succumbed to the challenge of  Francis James San Gabriel of Ilocos, who timed 9:33.1.

Oxales of NCR fought hard all the way to the line, narrowly missing out on defending his title with 9:33.2, despite smashing his personal best. Oxales, who won last year, had the previous palaro record with 10:11.31. It was such a stunning improvement if even up to the 5th place timed 9:58.2 and went under the old record.

Meanwhile, in the girl’s Walkathon, it was heartache for Sally Campus of Davao, who defended her title only be disqualified after the event. Campus, who set the 10:52.25, was clear to defend her title. But was told by officials sometime after the event she had been disqualified.

So what is next, maybe an Elementary Event for Walkathon?

Alcantara Bashes out 4 Throws over Palaro Record in Girls Shotput

Kassandra Hazel Alcantara (NCR) bashed out 4 of her 6 throws over the Palaro Record in Secondary Girls. But it was just another day in the office for the 17-year-old who studies at the University of the East. She had already established an 11.96m Record in the high school division of the UAAP back in February. Last year, she won the Palaro in Antique with 11.16m, only 4km away from the meet record. 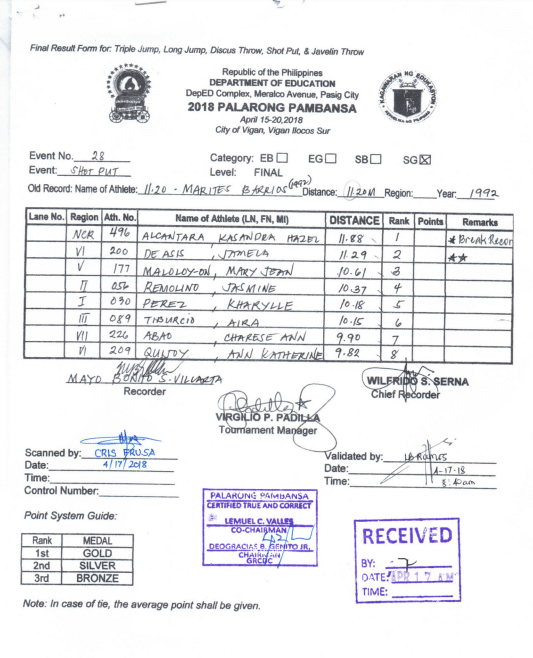 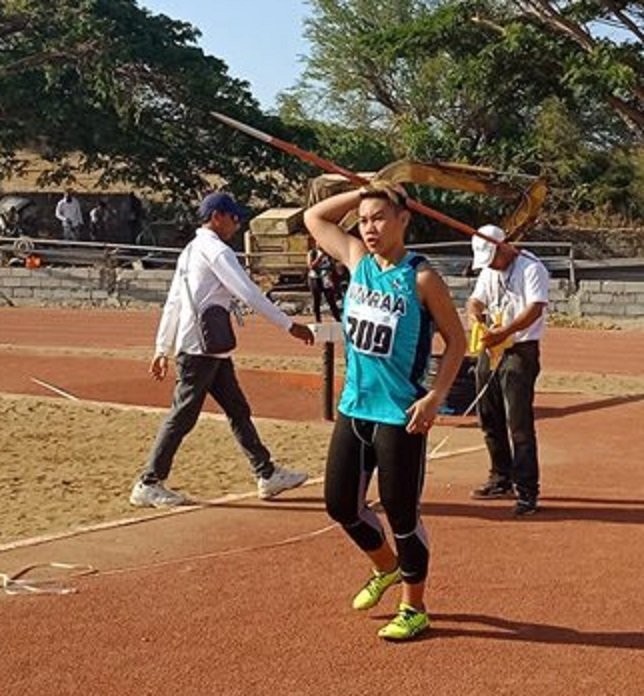 While all pre-media hype was focused on the Palaro Title’s defense by NMRAA record holder and champion from last year Sylvan Abunda.

Months before, I had been informed of a new talent emerging from the Western Visayas. And once again, the hard-working Arca siblings from Bacolod Miguel and Addy delivered another glorious gift to grass-root athletics from the little school of Romansita Maravilla.

17-year old Katherine Ann Quitoy had been runner up last year in Antique. They quietly waited, and prepared herself for the challenge of 2018. With no pressure as she was unheralded by the Philippine Media. Quitoy diligently honed her craft by her mentors. She had been throwing 47 meters in training, so she was really ready to surprise.

Surprisingly it was a 600-gram Javelin, despite that Quitoy hurled the spear out 45.72m to smash her previous competition best on her second throw. Despite her 5’3 height, Quitoy performance shaved nearly 3 meters off the Palaro Record of Abunda set last year of 42.85m.

The mark was also 2cm off the National Junior Record by Fil-Heritage Thrower Cerah Moren 45.74m set last year.  The performance was also the best by a 17-year-old Filipina, surpassing Moren’s performance at the same age two years ago of 44.36m. 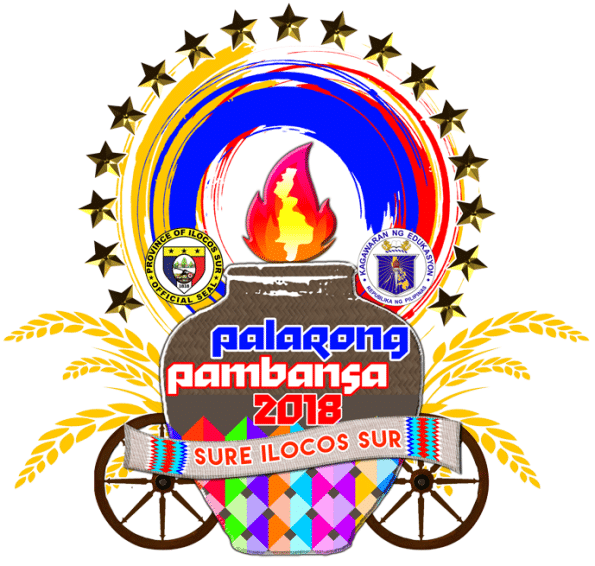 Good times up near the Palaro Record of 10:03 set by Ninura 2 years ago
2018 Palarong Pambansa

Vigan has won the bidding for the 2018 Palaro. Simultaneously, beating out Baguio, Marikina City, Ilagan City, and the Province of Bulacan. It is most noteworthy that Vigan, which may prove difficult to get to, is 10-12 hours from Manila by bus. It is located in the Province of Ilocos Sur. Especially relevant is that Vigan is a UNESCO Heritage site.

And one of the only towns in the Philippines whose structures have mostly remained intact.  While it is well known for its cobblestone streets. Its unique architecture of the Philippine colonial-era fuses Native Philippine and Oriental building designs and construction with colonial Spanish architecture. Furthermore, former Philippine president Elpidio Quirino, the

sixth President of the Philippines was born in Vigan, at the former location of the Provincial

Jail (his father was a warden); he resided in the Syquia Mansion.

Hence in the bidding conducted by the Department of Education, Ilocos Sur bested the

“Mabuhay Provincial Government of Ilocos Sur and DepEd Team and the wonderful presentation and exellent oral defense of a very confident and determined Gov. Ryan Singson,” remarked Dr. Edilbelto Abalos in his facebook account. Abalos is the Education Program supervisor of DepEd Region 1.

Hence following more than 15 minutes of presentation, Vigan City got the Palaro board’s nod as it hosts the national sports competition anew since 1953 and 1973.

“Region I (Vigan City) wins the bid to host the 2018 Palarong Pambansa. We did our best. We presented what we could offer… unfortunately, ‘The Coolest Palaro’ will not happen,” said Ryan Dale Mangusan of the Baguio City Mayor’s office.

The Palaro Selection board is chaired by the Secretary of the Department of Education and co-chaired by the Philippine Sports Commission (PSC) Chairman. Also, with education, Undersecretaries, and regional directors as members.

Hence after hours of deliberation, the Department of Education (DepEd) named Ilocos Sur as the host of Palarong Pambansa 2018. And according to the DepED calendar of activities, this will be held on April 16-20.