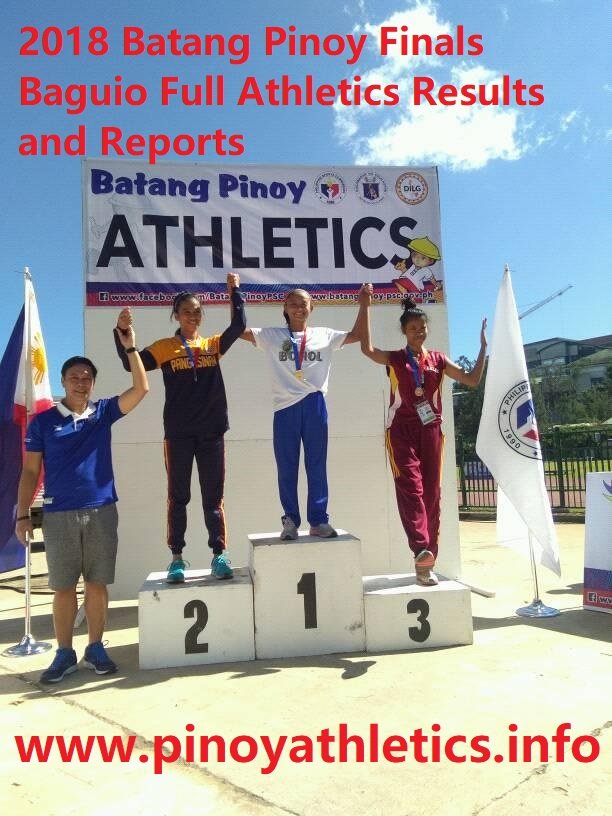 (Please note some of the events may not be the actual day of the event I am just posting results and doing reviews as I get them).

Peter Lachica of South Cotabato broke the Batang Pinoy Record in the 2000 Walk with a time of 10:08.76. The mark absolutely shattered the previous performance of  Vincent Vianamar Dela Cruz of Bulacan who timed 10:58.01 two years ago. So strong was the performance that all three medalists dipped well under the previous mark. Mark Anthony Estoya and Edmar De Guzman also surpassing the Meet Record.

And the fifth record of the games went to Patrick Shane Tolentino of Zambales who cleared 1.93m to tie the 2014 Meet Record of Alexis Soqueno of Bacolod who went onto become Palaro Champion three times in the High Jump and won a silver in the SEA Youth in the 400 Hurdles before retiring from the sport at an early age. Tolentino dominated these games with the second placer well beaten with 1.70m.

While in the Girls 2000m Steeples a new record was established as this is the first time the event has ever been held at the Batang Pinoy. Margvrylle Matchino of Laguna comes from a family of distance runners her older brother Maverick being a Palaro Champion in the 800m in 2015 in Tagum. She timed 8:04.24.

Batang Pinoy Record #7 went to  Jan Rey Gallano of Laguna, whose time of 57.20 was an electronic record with the Hand timed 56.8 of Alexis Soqueno of Bacolod still standing at 56.8 since 2014. Soqueno took a silver medal at the SEA Youth Champs before retiring early from the sport.

Record #8 Jason Jabol of Dasmarinas City broke the Meet Record of Veruel Verdadero 23.01 set in Tagum in 2016. Jabol won the 100m earlier in the Batang Pinoy. Veruel the 2x Palaro Champion in the 100 and 200 have now transferred from Dasmarinas to JRU and will be representing NCR at the Palaro having been with STCAA since he started high school.

With the organizers of this meet stating it will be the selection for the SEA Youth Championships that the Philippines is planning to hold next year. I think we should really hit the panic button. As in the last 2 SEA Youth Championships Athletics, the Philippines hosted in Ilagan in 2017 and had 1 Gold Medal after selecting a large team of nearly 80 athletes. In retrospect, the Thais sent a small contingent of 5 athletes and garnered 6 golds.

Then in 2018, the Philippines sent a smaller contingent to the SEA Youth held in Thailand and ended up with 0 Golds. In fact, they finished 7th and behind Timor Leste (a country of just over a million people).

In comparison when the Grass root coaches were in charge of the ASEAN School Games they got 4 Golds and 6 Golds in 2017 and 2018 with almost the same group of athletes.

The Worrying thing is that a lot of the countries best athletes eligible for the SEA Youth did not join the Batang Pinoy as they are one year too old (2003 cutoff, SEA Youth 2002). Or they missed out on the elimination rounds due to other qualifying meets for Palaro or being out of season training-wise.

We should note in the 2017 and 2018 SEA Youth Games were the Philippines had 1 and 0 Golds respectively. During the 2016 Batang Pinoy, there were multiple record breakers. Compared to this year the competition depth is not as strong. The Philippines finished 6th and 7th overall at the last 2 SEA Youth Champs in Athletics.

Diana Hurano, 15 of Bohol took the first record of the competition after a rather uneventful first day. Hurano leap of 5.45m broke the meet record of Gianelli Gatinga of Taguig set in 2015. While Hurano mark was impressive, at the same age Elma Muros had leaped 5.84m in 1982. Muros holds all the best ever performances still in the Long Jump for ages 14 to 18.

Meanwhile Mariel Abuano of Botolan, Zambales was in full command of the Girls High Jump winning by 20cm with a new meet record of 1.55m which passed the old mark of Saira De Vera of Pangasinan of 1.49m set in 2015.

Please note that the Organizers decided to disqualify Charlaine and Charmaine De Ocampo from the 400m Girls before the Final of the 400 after qualifying for heats. As it was ruled they did not participate in the mandatory Luzon Leg. Hence there were only 6 starters in the 400m Girls. 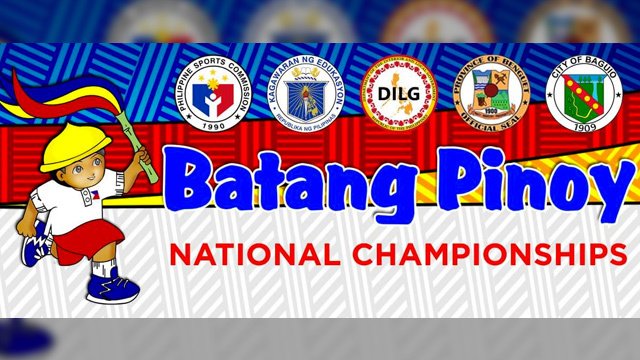 National Finals opening pushed back due to ‘Ompong’

by REUBEN TERRADO
16 HOURS AGO

The Philippine Sports Commission announced on Wednesday it will push back the opening of the  National Championship in Baguio and Benguet due to the threat of super typhoon Ompong in Northern Luzon.

In conclusion the multi-sport competition for athletes aged 15 years old below. Originally set to open on September 15, it will begin on September 17.

In addition, there will be no opening ceremony. However, Baguio City Mayor Mauricio Domogan said a grand closing celebration will be held on September 22.

The Cebuano delegation composed of athletes from Cebu City and Cebu Province has safely arrived in Baguio City. Two days before the super typhoon “Ompong” is expected to hit parts of Northern Luzon.

Similarly, both delegations are in Baguio to compete in the weeklong Philippine Sports Commission (PSC) National Finals together with athletes from other regions.

Both Cebu Province and Cebu City are billeting at the Doña Josefa Cariño Elementary School. Which is located at the back of the Baguio Athletic Bowl near Burnham Park and Baguio City Hall.

“We hope that (the storm) will not affect the entire meet,” Abing said.

Resets opener to avoid the storm

posted September 12, 2018, at 09:20 pm by Manila Standard Sports
Philippine Sports Commission Chairman Butch Ramirez today announced that the Batang Pinoy National Championships, scheduled September 15 to21 in Baguio City and Benguet Province will push through, but that they will forego the opening ceremony and games start on the 17th.
This decision was reached after two days of monitoring and consultations between PSC and the host city’s Mayor, Atty. Mauricio Domogan.In a joint statement, both officials assured the public that all measures to secure and support delegations are being taken.

The Philippine Sports Commission and host Baguio have moved the 2018 Batang Pinoy opening to September 17.

BAGUIO, Philippines – The Philippine Sports Commission and the City Government of Baguio jointly decided to move the opening of the National Championships to September 17, Monday due to the expected onslaught of Typhoon Mangkhut.

The opening program originally scheduled for September 15, Saturday will be done away with and instead, a grand closing program will be prepared.

Baguio, the defending champion of the games, is hosting about 7,000 athletes and sports officials from all over the country.

The city also suspended classes from pre-school to senior high from September 17 to 21 to give way to the athletes who will be staying in their schools.

MANILA – Bad weather prompted Davao City Mayor Sara Duterte to cancel the trip of 301 of its athletes for the Batang Pinoy Sports Competition in Baguio City.

“This is to ensure that the delegates will not be caught stranded in bad weather. We cannot compromise on the safety of the children, coaches, and support staff,” Mayor Duterte said in a statement issued on Wednesday.