16 Medals in Total for the Philippines less than the 21 Total won in 2014, but the most Golds they have won at an ASEAN School Games Athletics.

It improved from the 4 Gold Haul in 2017 all from Boys. My prediction before These games for athletics was the spot in predicted 6-7 Golds from the Girls only. And they got 6 from the girls. My boy’s prediction was also fairly accurate 2 bronzes (2 medals total) they got a silver and a bronze.

Overall compare this to the SEA Youth which had the same group of athletes 2017 and 2018  as they had 1 gold out of 80 athletes and finished 6th overall.

In 2018 they had a smaller team and finished 7th overall behind SEA Games minnows Timor Leste who had 0 golds also but more silver medals than the Philippines. At the ASG the Philippines finished 4th overall in 2014 and 2018 with pretty much the same athletes.

Ann Katherine Quitoy continued the golden run for the Philippines on Day 2 of the ASEAN School Games in Malaysia. Quitoy not only took a glorious 2-meter win. She also helped herself to a new championship record hurling the 500-gram Javelin 49.18 meters. Absolutely demolishing the old record of 46.04m set by a Malaysian athlete just last year. 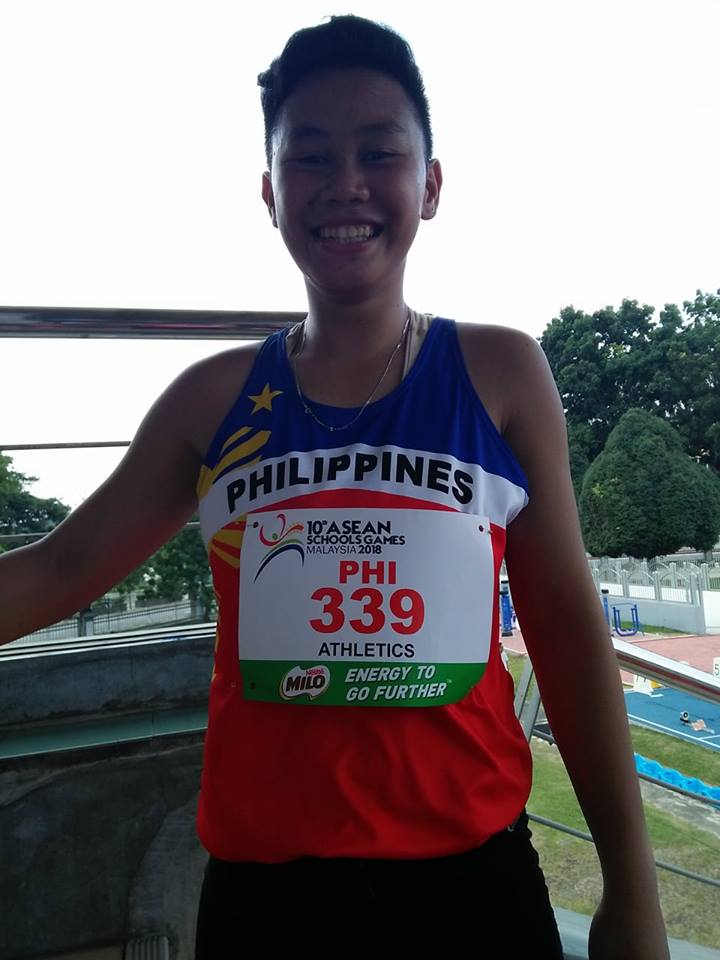 Her first throw of 46.74 was already over the old mark, and her second throw of 49.18 already sealed the gold medal. In fact, 4 of her 6 throws were over the old record. Supisara Klinla-or (Thailand) was a distant second with 47.89m and Yuni of Indonesia took bronze in 43.35m. 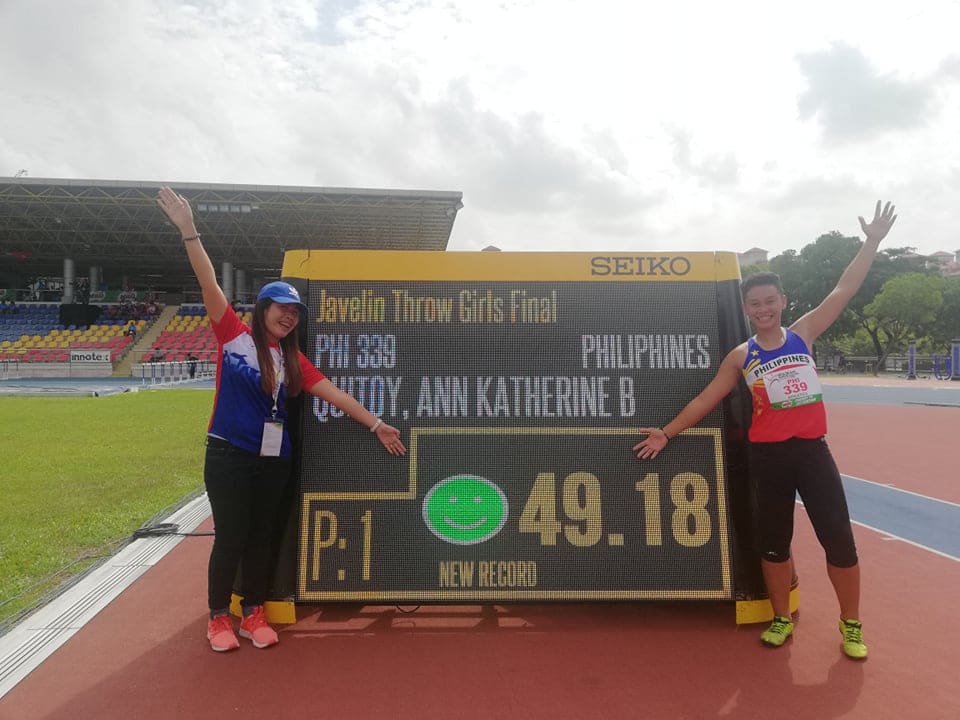 Quitoy who is part of a new breed of athletes being developed by Addy and Miguel Arca in Bacolod threw a distance of 45.72m which was a Palarong Pambansa record in April with 600 grams, and just 2 cm of the National Junior record of Fil-Heritage athlete Cerah Moren. She joins her training partner Trexie Dela Torre on the 3 gold medal tally by the Philippine Athletics Women at the ASG. 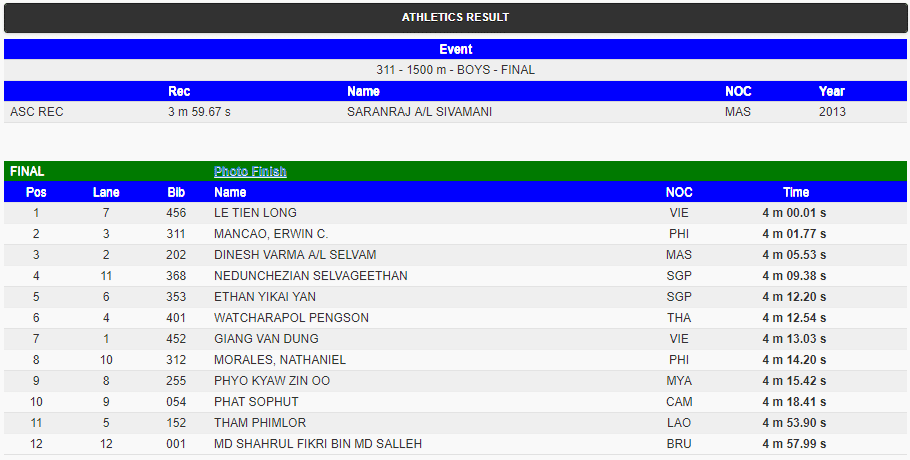 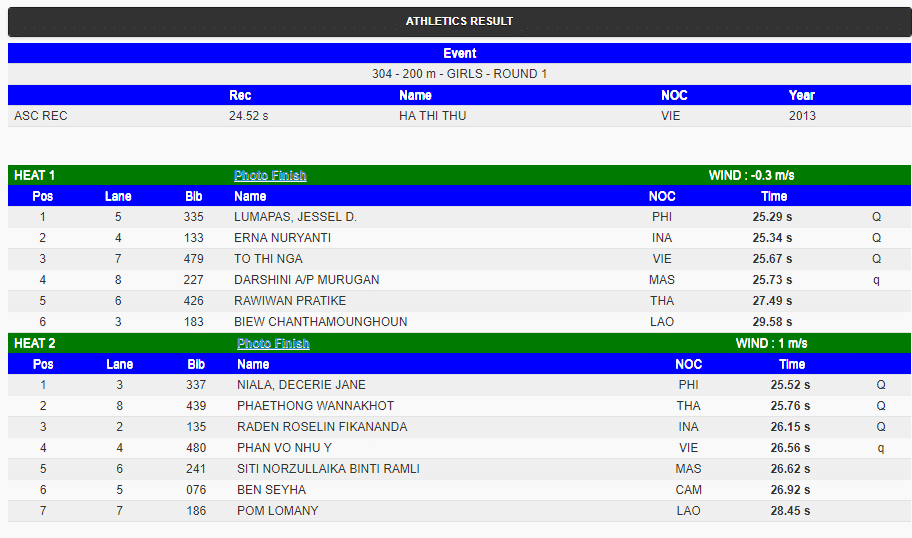 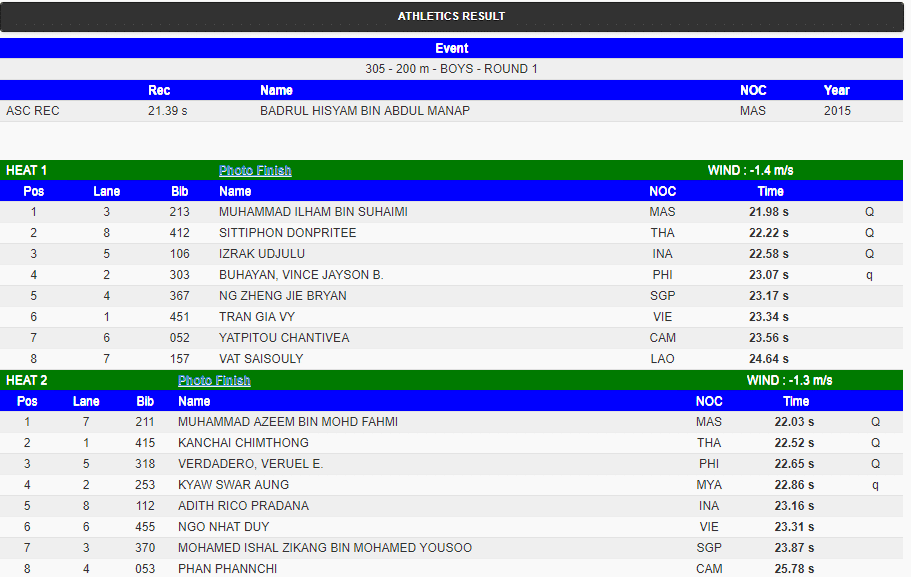 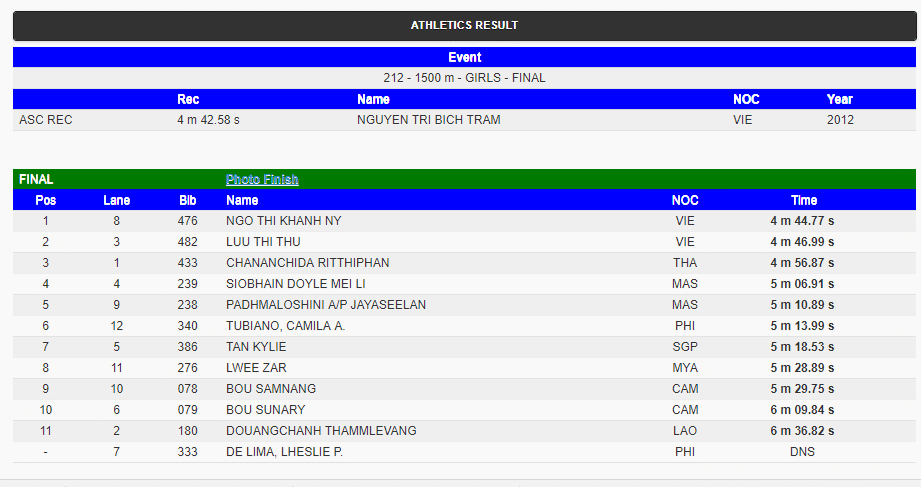 A close fight for the top 3, Philippines well out of the medal hunt in 4th .6 secs from the Bronze. 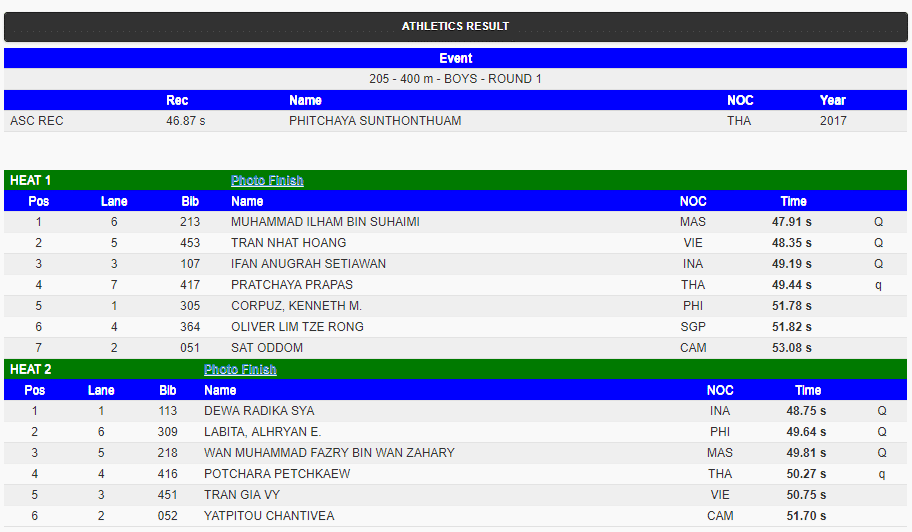 Suhaimi of Malaysia a rising junior leads with 47.91. Alhyran Labita did very well to run a PB of 49.64 and qualify 6th place into the final. Meanwhile Kenneth Corpuz timed 51.78 nearly 2 seconds behind his personal best. 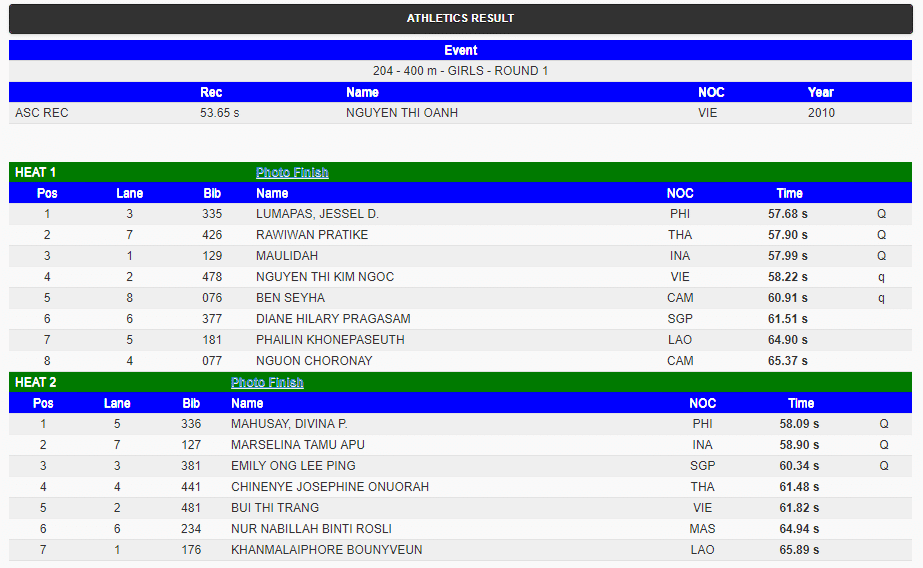 Jessel Lumapas who took silver in this event last year leads the heats winning heat 1 in 57.68. Divina Mahusay won the 2nd heat in 58.09, and qualifies 4th into the Final. Can Jessel add another gold to Team Philippines.

Philippine well beaten in 5th and 6th. The first time the walks has Filipino entries at the ASEAN School Games.

Le Tien Long of Vietnam broke the meet Record of James Orduna with 8m54.86. The Philippines this time was out of the medals with Mancao 9m15.19 in 4th and Josh Buenavista way down in 7th in 9m27.53.

Indonesia took the Gold, with Malaysia and Thailand getting the other medals. The Philippines finished 5th and 7th.

Into a relatively strong head-wind. Sidiq the SEA Youth Champion added the ASEAN School games title to his resumee. Sa’adon of Malaysia took silver in 10.88. Fahrurrozi of Indonesia took bronze in 10.97. In 5th was Veruel of the Philippines. Only .22 or a stride and a half seperated first through to 7th.

Agreta of Indonesia won the Gold in 12.05, from her country woman Nuryanti who had to settle for silver again. Eliza Cuyom of the Philippines ended up 6th in 12.44.

Bui Thi Trang defended her title with her firstever sub 1m00 run. The Vietnamese athlete continued a strong winning tradition of Vietnam in this event. Riza Jane Vallente who really should have been nominated by PATAFA for world juniors took silver in a new Personal Best of 61.52. Just outside the 61.07 National Junior record of Jenny Rosales. Vallente has another 2 years to build on that. Thailand took bronze in 63.13.

Bernalyn Bejoy who was the silver medalist at the 2018 SEA Youth missed the gun at the start and fell behind into fourth in 64.40s, over 2 seconds off her personal best.

Kenneth Corpuz slipped down to 6th place for the Philippines. Malaysia and Indonesia had a blanket battle for first place.

Please note the height of the Hurdles is not senior height. Rosli of Malaysia and Kaewkul of Thailand in Heat 1 lead with 53.52 and 53.55. The second heat was much slower with Yulianto of Indonesia in 56.02. The Philippines only entry Kenneth Corpuz qualified 7th to the final. With only 9 entries, only 1 athlete didn’t make the final. 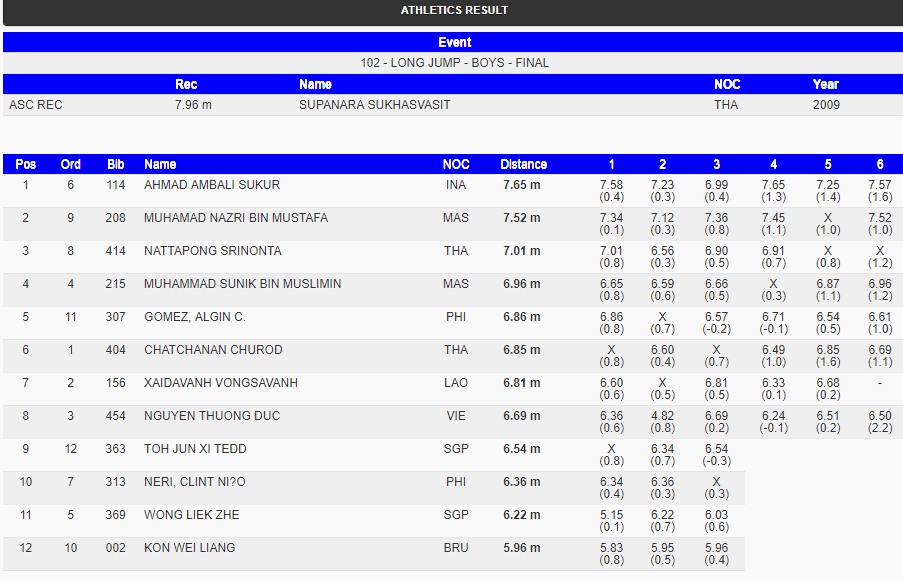 Muhammad Mustafa leapt 7.52m. These are the strongest performances at the ASG since Supanara of Thailand set the record in the inaugral games at 7.96m back in 2009. 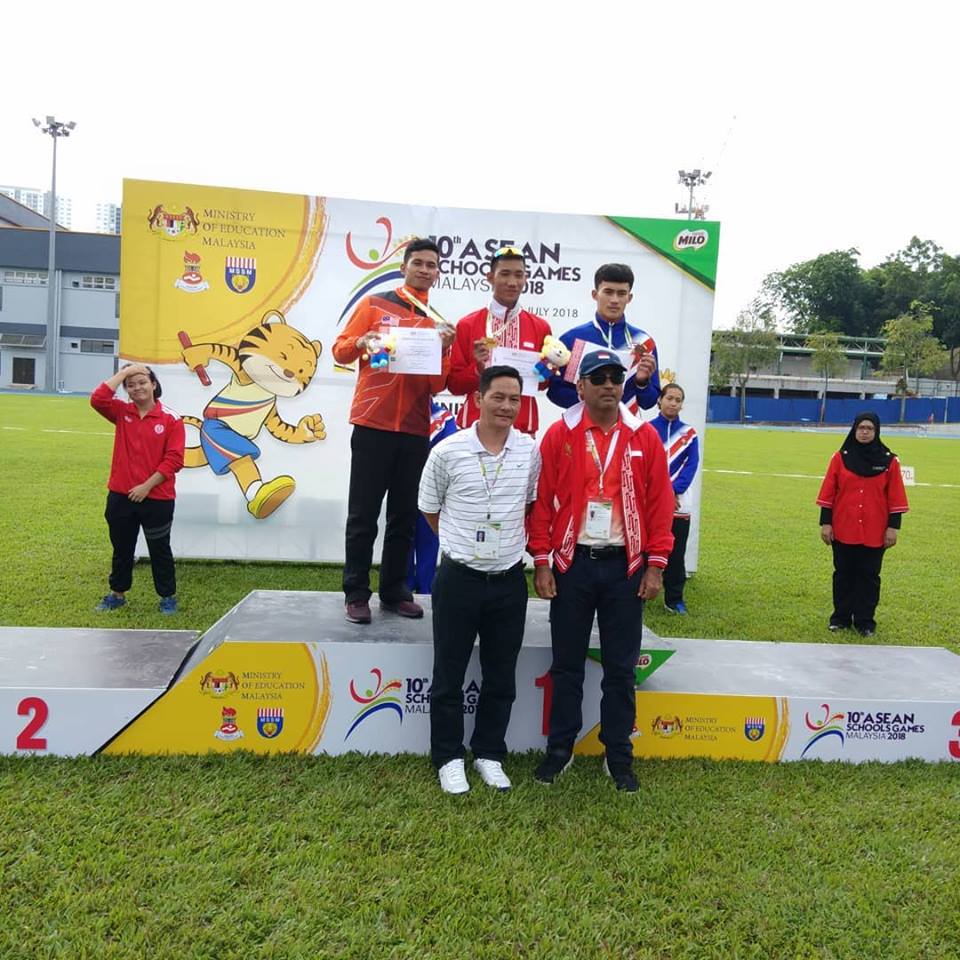 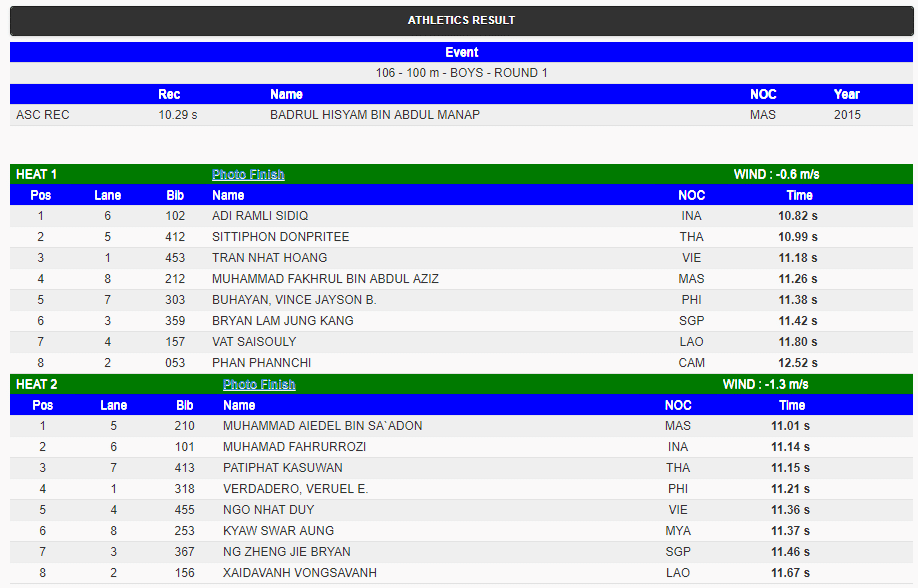 Sidiq of Indonesia the SEA Youth Champion had the fastest time in Heat 1 with 10.82. Inspired by the win of country man Zohri at the World Juniors. Sa’adon of Malaysia who is a 10.5 guy won the second heat in 11.01. There was a slight head-wind Veruel the Palaro Champion qualified 7th to final in 11.21. And Vince Buhayan failed to progress finishing 11th in 11.38. Firstly note Le Tu Chinh of Vietnam the 2017 SEA Games 100 and 200 Champion holds the meet record here at 11.79. Jenny Agreta won the first heat in 12.11 and last year’s silver medalist Nuryanti won the second heat for Indonesia in 12.35. Cuyom and Lumpas qualified through to finals in 6th and 8th place. 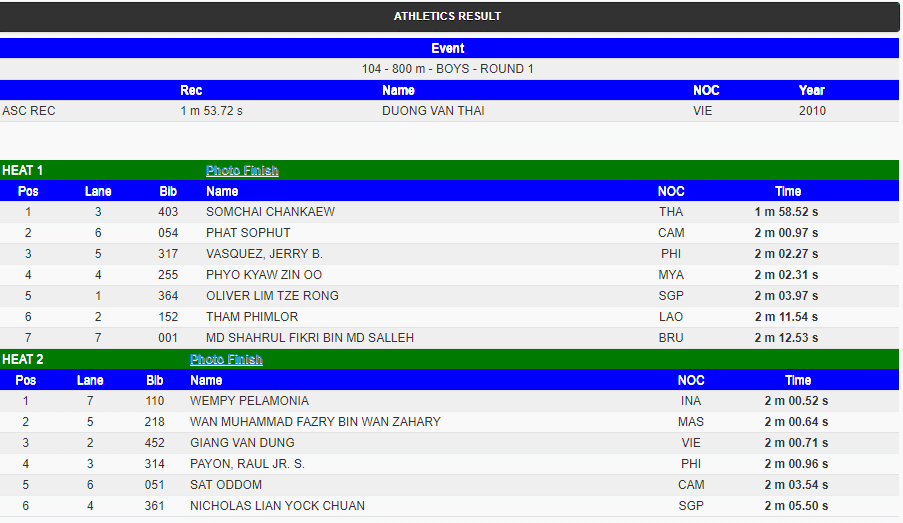 Both Vasquez and Payon advanced to the finals.

Thanata Promin of Thailand won with a great throw of 40.93m. Stunning Jasmin Phua of Singapore who was well under her 45m PB with 38.61m. Thailand also took bronze in 37.55m. Palaro Champion Franz Gela Bintad faded to the 6th place with a 35.27m throw.

The event proved alot stronger this year than previous 2 editions with 8 competitors instead of just 4 like previous years. Palaro silver medallist Kassandra Alcantara was not included as she already graduated from grade 12. And the DEPED specified no Grade 12 graduates to be included in the lineup.

Winning time was really slow here. With Thu of Vietnam defending her title in 10m18.09 (10m02) 16 seconds slower than her PB. Myanamar took second in 10m47.25. Just holding off Tubiano of the Philppines well off her PB of 10.07. Even further behind there PB was Lheslie De Lima (10.06) the Palaro Champion who faded to 6th place in 11.27.28. The first event did one Bronze for the Philippines.

Schedule and Team Lists below. Philippine Athletes to watch out for.

First up for the Philippines is Leslie De Lima 10.06h and Camila Tubiano 10.07h in the Girls 3000m. De Lima from Bicol who is only 14 years old won the Palarong Pambansa. She holds the Age Grade record for 14-year-olds. The National Junior Record which belongs to Meagey Ninura at 10.03 is indeed within her reach. The #1 contender is Thu Hang Doan of Vietnam with a PB of 10.02 who won this event last year.

Predict – De Lima and Tubiano should be in the top 3 in this event with a slight chance of one of them if they work together upsetting the Vietnamese champion.

The 100m Girls is led by Duong Thi Hoa of Vietnam who just won the SEA Youth in 12.11 back in April. SEA Youth silver Erna Nuryanti of Indonesia 12.18 & 12.19.  Jinthana of Thailand 12.19. Jessel Lumapas with 12.21 is ranked #4. While Cuyom who was only 4th at the Palaro not within medal reach. Palaro 100m Record Holder Samantha Limos was not in the delegation as she had skipped the 2018 Palaro to compete at a small meet in China instead.

Predict – Lumapas should scrape into Top 3. Cuyom not likely top 3 in this event.

This should be an interesting one with Bui Thi Trang of Vietnam defending her title in the 400 Hurdles (1:01.53). Riza Jane Valiente the Palaro Record Holder (1:01.64) and Bernalyn Bejoy (1:02.04) will go round 3 against each other. After Valiente got the better of Bejoy at the Palaro and Philippine National Games. Both of them look to challenge the Vietnamese runner for the Gold.

Predict – Valiente and Bejoy certainly in the Top 3. Slight chance one of them can beat the Vietnamese runner.

Probably the most interesting event of Day 1. 5 Girls all over 1.70m going head to head. The defending champion from Vietnam with 1.76m this season. Followed by Thailand who got 6th at Asian Juniors with 1.74m and 1.72m. Alexie Caimoso of the Philippines with 1.72m the Palaro Record Holder, Evangeline Caminong the National Junior Record Holder of the Philippines 1.71m, and another Malaysian 1.71m.

Predict – Vietnam for the win. The other 2 girls have a chance of a minor medal. 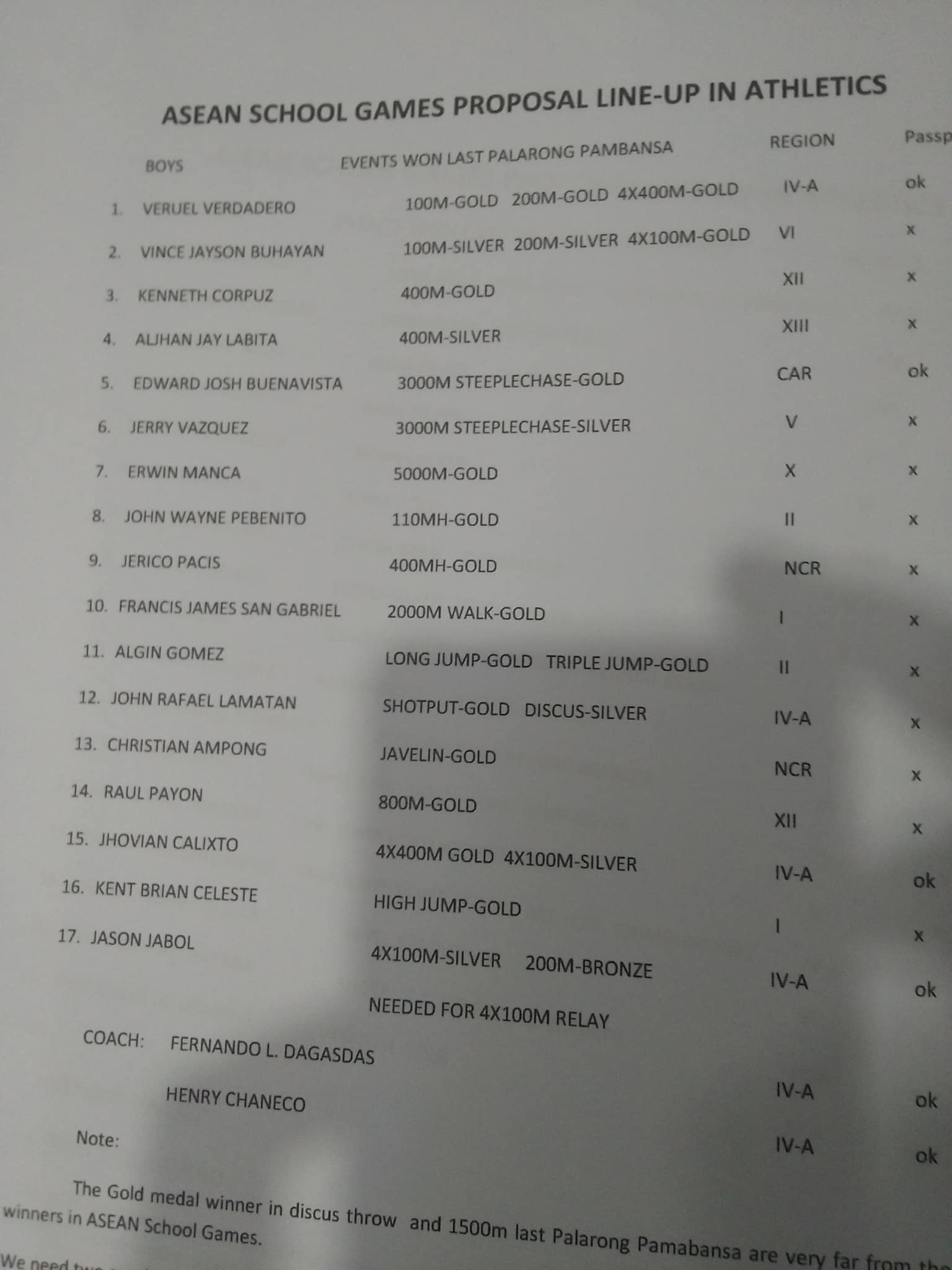 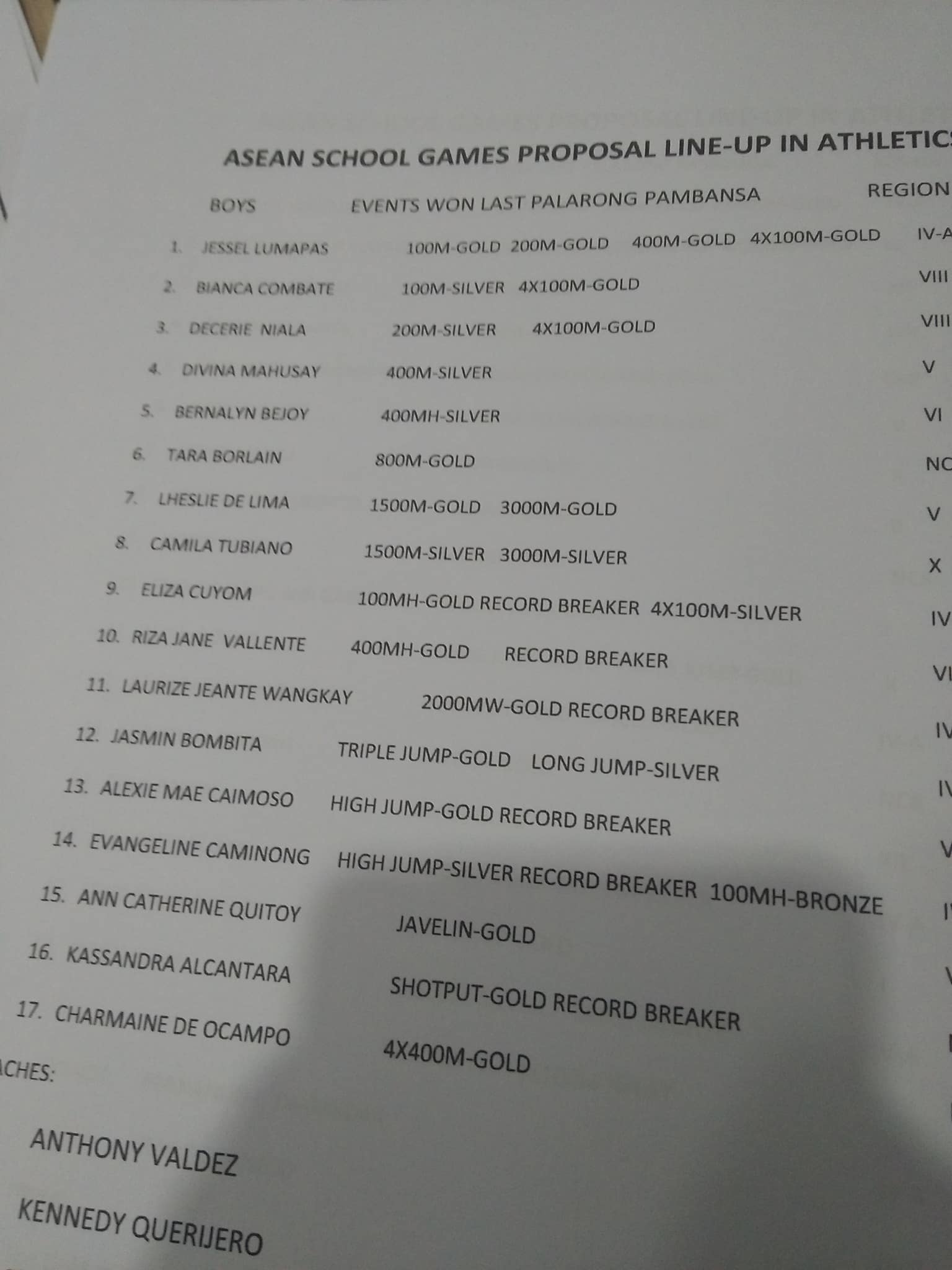 Changes to girls line up.

The 10th  ASEAN School Games 2018 Athletics will be held at Bukit Jalil Stadium Kuala Lumpur from July 21 (this Saturday) until July 24. Pinoyathletics.info will be covering this event so stay tuned for updates.