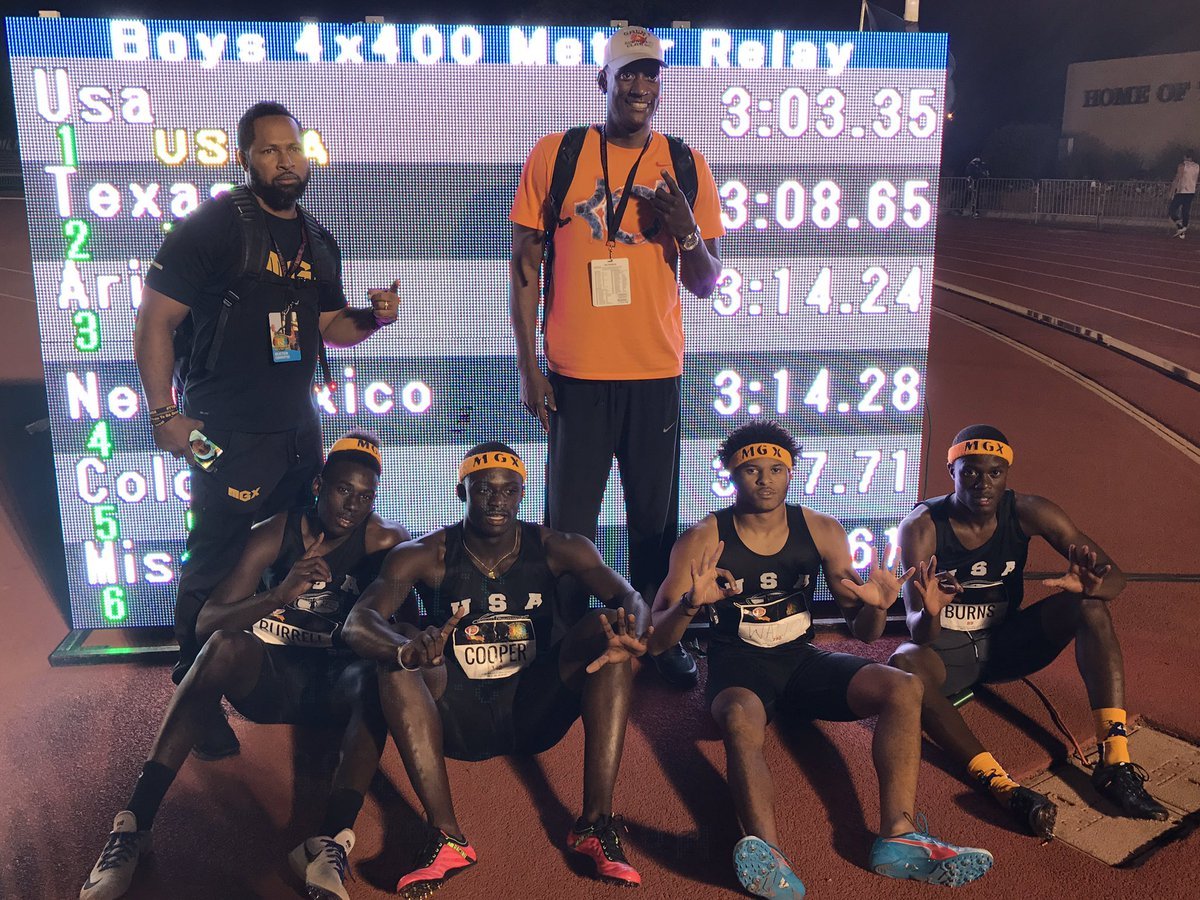 Athletics could introduce an

with International Association of Athletics Federations president Coe declaring: “Everything is on the table.”

Coe said athletics need to have a “possibly uncomfortable set of conversations” to secure its future, admitting there were aspects of the sport that were holding it back.

Speaking at the Leaders Sport Business Summit, he said: “Over the next year, our relentless focus on formats and the changes that we make in the sport has to be absolutely laser-like.

“I’m not ruling, frankly, anything out now. I think everything is on the table, and there are some things that I want to look at.

“Just a simple thing: why are we wedded to a 400-meter track all the time?

“Why can we not have pop-up tracks, 300m tracks, in football stadiums, taking the sport to where we can seat people without necessarily having to be a championships stadium? 200m tracks.

“There are lots of things that we can do. What about teams, cities, franchises? What about having the excitement of the draft, the pick, the IPL auction? Those are the things that I really want to have on the table. And I don’t want to take them off the table.“We need to have some early-hours moments of unease about what we are prepared to do, and I think we have to be radical.”

Coe confirmed some changes could be ratified in time for the next World Championships in 2019.

“You’re going to have to challenge a lot of the orthodoxies.

“We have a World Championships, which is fabulous. London was fabulous. But is that sensible over 10 days anymore?”

“These are the things that are on the table, and I, frankly, don’t want to remove them until we’ve had, really, at times, possibly an uncomfortable set of conversations.

“We really need a deep dive over the next two years so that we really do understand what that sport can look like and set it on the way for the next 30 years.”

After being misled by the motorcycle guides, confused runners have to turn back, losing valuable ground in Venetian Marathon. Photo Credit: Euro News via Youtube Video[/caption]

The motorbike guides misled about half a dozen of the favorites (All Africans) at the Venice Marathon. Oddly enough, an African still won, representing host Italy. Eritreanrean born Eyob Faniel of Venetia won the race in 2h12.15.

Following a motorcycle guide, they had traveled a few hundred meters before realizing they had been led off course and turning back.

It was in vain, though, as the runners lost the race due to the cock-up. 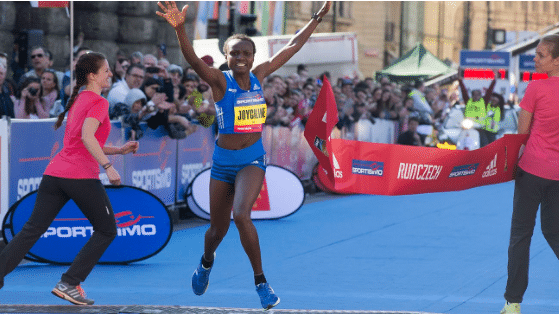 Joycliine Jepkosgei, 23 of Kenya, has broken the Women’s World Half Marathon. She took one second off her own world record to win the IAAF Gold Label road race in 1:04.51  on Sunday 22. This was done in Valencia, Alfonso Half Marathon.

This is the third-world half-marathon record broken in Valencia. Jepkosgei had been doing well since running a world record of 29:43 for the 10km.

Jepkosgei was a Member of the Kenya Defense Forces in her country, only having emerged as a national athlete two years ago. And a meteoric rise saw improvement rapidly.

In comparison, in the Philippines, Mary Joy Tabal is training in Italy now. Philippine National record is 1:16.28. Almost 12 minutes behind.

Bahrain’s Abraham Cheroben won the Men’s half marathon race in 59:11, taking his third win in four years in Valencia.

CHICAGO (AP) — An American has won the men’s Chicago Marathon for the first time since 2002.

The last American to win the men’s race was Khalid Khannouchi in 2002.

More than 40,000 runners started the 40th annual Chicago Marathon, and more than a million spectators lined the route.

2017 IAAF World Athlete of the Year 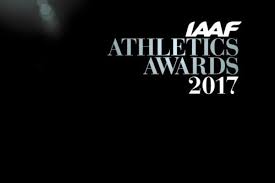 With the selection process to choose the 2017 World Athletes of the Year now underway, here’s a closer look at this year’s 10 men’s nominees selected by an international panel of athletics experts, comprising representatives from all six continental areas of the IAAF.

The winner will be announced at the IAAF Athletics Awards 2017 in Monaco on Friday, 24 November.

World discus champion, IAAF Diamond League champion. Her world-leading 71.41m was the best throw in the world since 1992. Seven throws beyond 70 meters.

World heptathlon champion. Set a world lead of 7013 at the Hypo Meeting in Gotzis to move to third on the world all-time list.

World javelin champion. World lead of 94.44m to move to second on the world all-time list.

VOTING PROCEDURE FOR 2017 WORLD ATHLETES OF THE YEAR

A three-way voting process will determine the finalists.

The IAAF Council and the IAAF Family will cast their votes by email, while fans can vote online via the IAAF’s social media platforms. Individual graphics for each nominee will be posted on Facebook and Twitter later this week; a ‘like’ on Facebook or a retweet on Twitter will count as one vote.

The IAAF Council’s vote will count for 50% of the result, while the IAAF Family’s votes and the public votes will each count for 25% of the final result.

Voting closes on 16 October. After the voting process, three men and three women finalists will be announced by the IAAF.

The male and female World Athletes of the Year will be announced live on stage at the IAAF Athletics Awards 2017.

In one of the surprise twists in Track and Field History. Justin Gatlin of the USA, at 35 years of age, became the oldest 100m Champion in the History of the World Track and Field. After six consecutive silvers at the world and Olympic level to Jamaican Usain Bolt.

Bolt, who is retiring after these championships, ran his final race; a sluggish start saw him nearly 2 strides down on NCAA Champion Christian Coleman of the United States. The 21-year-old led the Jamaican the entire race. However, the two did not seek Gatlin to sneak up in lane 8 to take the win.

“I was in Lane 8,” Gatlin replied with

It’s not certain if Gatlin carries on through to the 2020 Olympic Games; he will be 38 years old by then.

Gatlin’s mark of 9.92 is the fastest ever by a 35+-year-old athlete. Having run 9.95 in June before breaking the 9.96 set by Kim Collins of St. Kitts in 2014. In retrospect, Linford Christie of Great Britain was the oldest Olympic champion ever at 32. And Bolt, at 31, has decided to retire.

Sifan Hassan ran another impressive time of 3.56.14 to dominate the womens 1500m in front

of her home crowd.

Maria Lasitkene, competing as an Independent Athlete, won the High Jump in 2.04m; her next opponent was 1.90m. Sandi Morris (USA) leaped 4.65m in the Pole Vault. Winning on countback from another independent athlete Olga Mullina 4.65m and Robeilys Pienado of Venezuela 4.55m.

Nicole Butchler (Swi) won the Women’s Pole Vault in 4.65m from local Angelica Bengston (Swe) and Oslo winner Robeilys Penaido (Ven), with them both losing on countback. With the same jump.

Yaime Perez of Cuba won the Discus in 67.92m beating Sandra Perkovic of Croatia at 67.75m.

The very famous and traditional Bislett Games have now become part of the Diamond League.

Mutaz Essa Barshim of Qatar had a big jump of 2.38m to claim the 2017 world lead. His nearest pursuer light years behind with 2.29m. Barshim was born in Doha into a Sudanese family. He holds the Asian record at 2.43m. Javier Sotemayor of Cuba set the world record in 1993.

Baboloki Thebe (BOT) won the 400m in 44.95. In a field that included the Borlee Brothers of Belgium. Karsten Warholm gave his home crowd something to be excited about winning the 400 Hurdles. Beating some big names with Kerron Clement (USA) coming home last.

In the Men’s Javelin, Thomas Rohler of Germany won with an impressive 90.06m. The world record with the modern Javelin is 96.96m held by Seppo Raty of Finland in 1991.

In the 5000 Women, there was a National Record and world lead from Helen Obiri of Kenya in 14.18.37. Nearly every athlete in that race broke their PBs.

In the Women’s Pole-vault, Greek Katerina Stefandi had a world lead with 4.85m. Ahead of Cuban Yarisley Silva 4.75m and New Zealander Eliza Mccartney, who also leaped 4.75m. 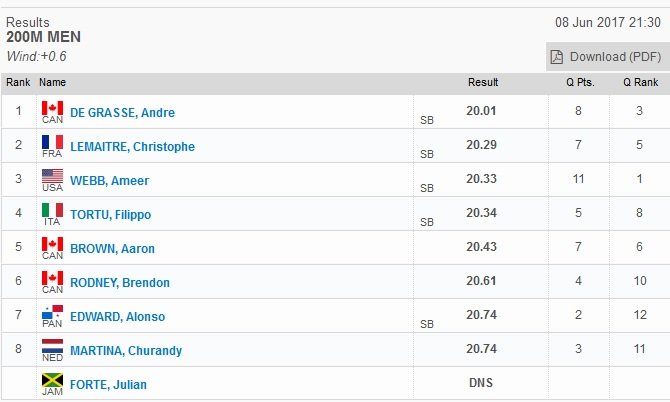 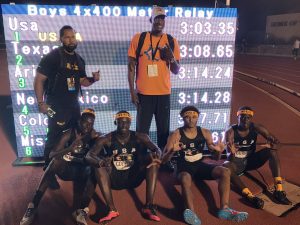 The USA team, which consisted of Jamal Walton, Tyrese Cooper, Thomas Burns, and Sean Burrell, smoked the field in a remarkable 3:03.35 at the Great Southwest Classic. The time is a new American Youth Record for the 4×400 breaking the old record of  3:06.22.

It’s also a world record for youths. The World Junior record is 3:01.09 by the United States, which featured LaShawn Merritt and Kerron Clement at the 2004 World Junior Championships in Grosetto, Italy 2004.

Let’s take a look at the US; they have High schoolers running these times. The Philippines has guys in the national team running 48 seconds. In fact, America can make about 500 teams that can beat the national team.

At the famous Prefontaine Classic, the 4th leg of the Diamond League. Ronnie Baker of USA, 24, stormed away from a quality field at halfway. Baker was a meter clear and never looked like giving any of that away, as the emerging fastest man in America and the world right now.

Albeit wind-aided. 6 Men went under 10 seconds with a +2.4 tailwind at Eugene, Oregon. Barker won in 9.86, a world-leading wind-aided time. His current legit best is 9.98. The second was Bingtian Su of China in 9.92, the fastest time by a pure Asian sprinter in any conditions (the best legit time is 9.99 x 2). Su is the only athlete of Asian origin to break 10 seconds ever. Englands Chijindu Ujah was third 9.95 (9.96 PB), from  Olympic bronze medallist Andre De Grasse of Canada (9.96) and Olympic silver medalist Justin Gatlin (9.97).

Interestingly, in the High Jump, Marie Lasitskeno wins in 2.03m, very far in front of 1.95m. But the status of Authorized Neutral Athlete is one I haven’t seen before. I

found further information on this is usually due to political instability in the country.

Athletes have competed as Independent Olympians at the Olympic Games for various reasons, including political transition, international sanctions, suspensions of National Olympic Committees, and compassion. Independent athletes have come from the Republic of Macedonia, East Timor, South Sudan, and Curaçao following geopolitical changes in the years before the Olympics, from the Federal Republic of Yugoslavia (present-day Kosovo, Montenegro, and Serbia) as a result of international sanctions, and from India and Kuwait as a result of the suspension of its National Olympic Committee. Medals were won by Independent Olympians at the 1992 and 2016 Olympics, both times in shooting.

(More Information on this here)

Certainly, not an Underdog was Olympic Champion Elaine Thompson of Jamaica, who took an easy win and a world lead of 10.78. A compelling win over the tall Tonia Bowie (US) 11.04 and Ta Lou (Ivory Coast) 11.07.

At the first round of the 2017 Diamond League, it was a star-studded field. But it was the least famous man who was making waves in recent months who triumphed.

Femi Ogunode (10.13), the Asian Record Holder, a former Nigerian running for host Qatar, took third. Ogunode, who seemed to dart in all directions in his lane, actually strained his hamstring and challenged Simbine early before fading near the end. Justin Gatlin took fourth (10.14). Andre De Grasse, the Olympic silver medalist in Rio in 2016, wound up 5th (10.21).