As and miscalculated the Heptathlon results in the original UAAP official results. Therefore, I have added the correct calculations.

Most Noteworthy was that Alex Bautista set his mark some 32 years ago!. While both boys were also from the University of the East. Also, the Narido mark is more recent than in 2013. Hence, James’s excellent performances secured gold in the 800, 1500, and 3K Steeples. Consequently saw UE retain the overall championship in the UAAP High school boys division. 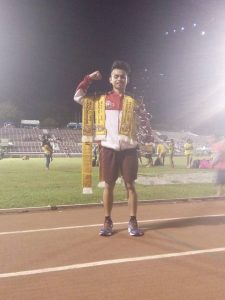 While Orduna, who will run at the NCR meet in a few days, is preparing to defend his Palaro title. Yet already, he has timed 15.24 in time trials against adult members of the national team. The 17-year-old has his eyes set on the 15.38.40 Palaro Record of Cresencio Sabal set in the 1998 Palarong Pambansa.

Consequently, it was by no means a slow field. While James clearly dominated the race. Also, the following three all went under the old record. John Osorio of UE 17.21.81, Kenneth Tuague UE 17.24.75 made it a UE clean sweep of the podium. And Jericho Gelindon in fourth 17.31.88 also under the old record.