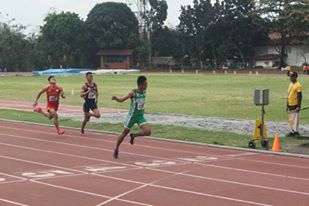 And in Shotput, Ron Mols Andawa heaved a massive 14.51m to shatter his JRU teammate Albert Mantua (13.90m). Udtohan, Lopena, Medina, and Fuentes are all members of the national team

Edwin Giron Jr. from Zamboanga City was even more impressive, now running for EAC, who took nearly 3 secs off the 800m boy’s record with a time of 1.56.83. Giron is the Batang Pinoy champion in the 800 and 1500.

More success came for Emilio Aguinaldo College, who secured the Boy’s overall title by breaking the 4×100 and 4×400 boys’ records. Tyrone Flores of EAC also added 2m to the discus record.

JRU Miller Manulat helped himself to the boy’s records in both the boys Long and Triple Jump.

Julian Reem Fuentes (CSB), 22, shattered his own Philippines NCAA Record with a 7.59m effort Breaking the 7.42m he set last year. But he was not alone in helping himself to this kind of action.

4 of his buddies also went over the 7-meter barrier. Fuentes’s effort was 10cm off his PB of 7.69m when he won the Singapore Open last April. The 7.59m tops the Philippine Ranking list and puts him above the SEA Games silver medal standard.

Two other athletes were reported to have leaped over 7 meters also. I am waiting for the official results.

Also in the running is Janry Ubas, who leaped 7.39m to break UAAP Record. Ubas, the SEA Games Decathlon Bronze medallist, jumped 7.55m last year. SEA Games Bronze medalist Fil-Heritage Donovant Ariola (PB 7.64m), based in El Paso, Texas, is yet to register a performance this year. Another Fil-Heritage athlete Tyler Ruiz based in Los Angeles, who leaped 7.63m last year, could only manage a 7.08m effort at a meet in Los Angeles.

SEA Games was won in 7.75m in 2015 by Supanara of Thailand, Pham Van Lam of Vietnam was silver in 7.52m, and bronze went to Donovont Ariola of Philippines in 7.51m.

SEA Games will be held in August; there is until June for selections to be finalized.