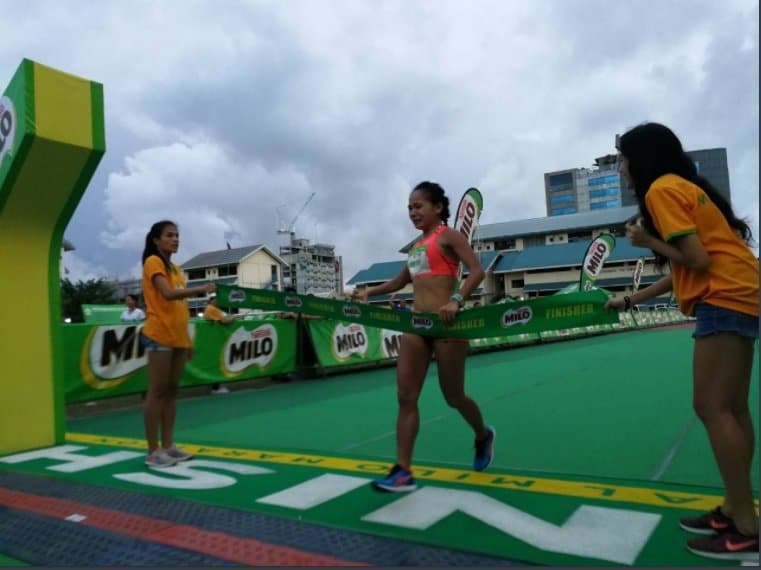 It was a tough day for Mary Joy Tabal. Who had to cope with the sad news that her beloved father had passed away yesterday. Asked whether she wanted to continue to run. Tabal responded I will as my father will be waiting for me past the finish lines. Tabal, 28 fought her emotions the whole race winning her fifth Milo Marathon title. And dedicating the win to the memory of her late father.

Truly a piece of History under the most unfortunate of circumstances. Tabal tied the record of the Arsenia Sagaray sharing 5 Milo Marathon wins.

Cheered on in front of her home crowd. The popular dainty 4’11 runner took time off her training in Tuscany, Italy to give back to Milo and was cheered on by the people of Cebu every step of the way. Tabal really proved once more she is ‘The Peoples Champion’. 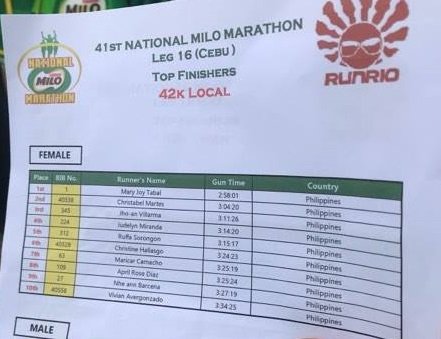 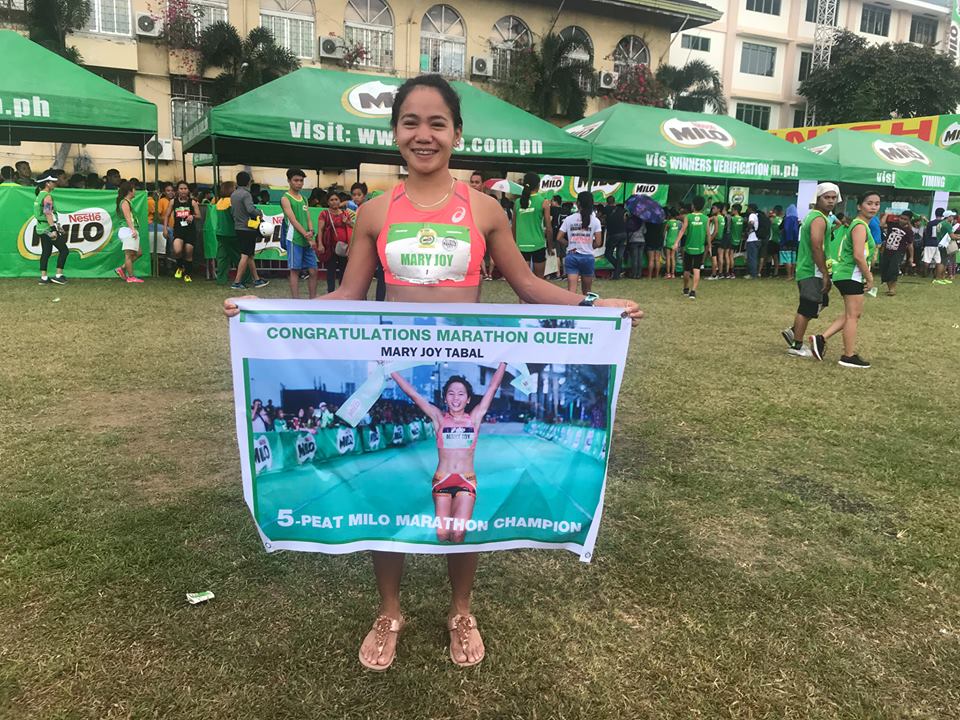 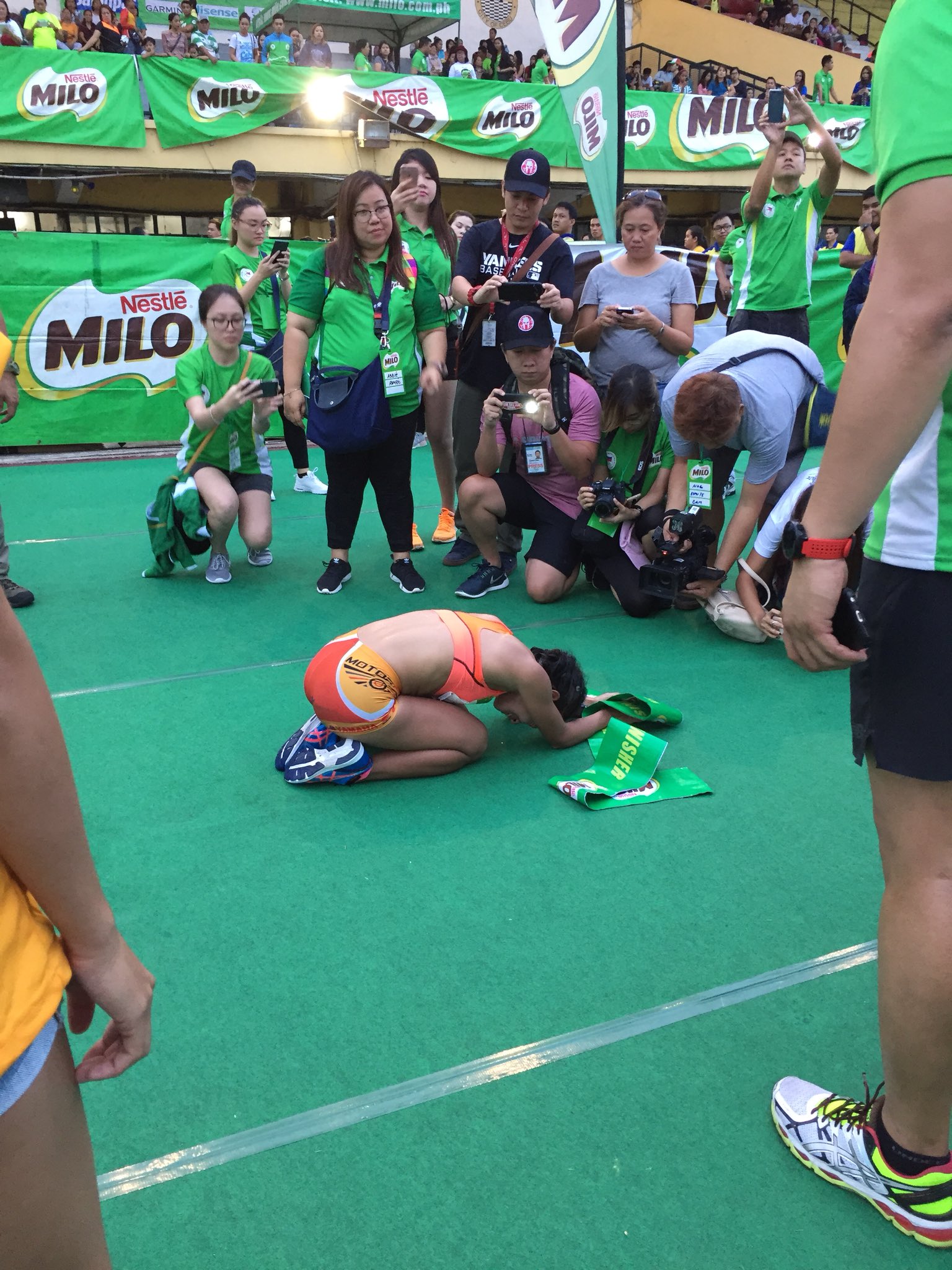 Tabal looking for a fifth title, Milo Marathon a few days from now, Women’s Review and

Tabal will fly back from her training camp in Tuscany, Italy, having ran half Marathons in

Spain and Singapore to prepare for the Milo. While Tabal focus remains the Asian Games in

2018. She is excited to perform in front of her home crowd in the event that launched her

The 41st Milo Marathon will be held in Cebu in a few days on December 3. And the course

starts at the Cebu Normal University.

Tabal although expected to romp off with her fifth Milo Marathon fairly easily. The Battle will surely be for the minor places. Perhaps the biggest challenge will come from 38-year-old Cristabel Martes. The Baguio based Martes part of the legendary long-distance running stable of Mario Castro. While Martes times of 1h23.45 (Milo, Urdaneta) and 3h03.28 (Run Rio Series) Manila this year pale in comparison to Tabal’s 1h16.28 (Scotia Bank, Ottawa, National Record) and 2h48.26 (SEA Games Gold Kuala Lumpur). Martes can still hold her ground against the other woman in the race as she is the only other entry who has a PB below 3 hours in the Marathon.

Another top contender is Aileen Tolentino of the Philippine Army who has run 1h26.18 (CDO leg) which converts to 2h59.56. It will be interesting to see if Tolentino can join the Sub min club and land a top 3. Other contenders include Ruffa Sorongon (Tagbilaran Leg, 3h04.31 est), Former Milo and SEA Games Champion Jhoann Banayag-Villarma (Lucena Leg,  est 3h06.24). And the promising Christine Hallego who has returned after giving birth to win the Butuan leg (est. 3h09.12).

BEFORE THE MILO MARATHON

With the Milo Marathon tomorrow, Pinoyathletics.info catches up on the Men’s  Review for the Milo Marathon. With the quality of our Men dropping significantly having not secured a SEA Games medal of any color since 2013. The race looks to be an open field.

Looking to defend is last year’s Champion Jeson Agravante who holds a PB of 2h35:13. Has not run any Marathon or even Half Marathon races since the SEA Games in August. So far this year back in March Agravante clocked 2h57 at the Scotia Bank Marathon in Ottawa Canada, he did not finish at SEA Games due to cramps. It’s hard to access how well Agravante will go tomorrow as his current performances are unknown and he has focused mainly on training.

Please note ‘The Master’ Rafael Poliquit who was 2014 and 2015 Back to Back Milo Champion and has the fastest time in 2017 of 2h35:18 will not be joining. The fans will have to wait another year for The Masters moment.

Someone who has a very good chance is Richard Salano whose Half Marathon time would equate to about a 2h31 Marathon. According to Runners World Calculators.

Also in contention for a Top 3 slot is Gerald Zadala, Bryan Quiamco, Bobby Tadlas, Cesar Castenato who have registered good Half Marathon times and local favorite Rafael Pescos who has run 2h37:12 which won the Milo NCR Marathon.

2018 Cebu Marathon Results
Regine Tugade of Guam - Track Beauty of the Week
UAAP Athletics 2021 Will it Push Through?