and can view Batang Pinoy Records in Athletics here

2017 Batang Pinoy: Tara Borlain blasts out the best every time by a 14-Year-old Filipina in 800m (video)

Consequently, the time was the best recorded by a 14-year-old Filipina.

Hence eclipsing the mark of 2.17.2 set by Anjelica De Josef of Aklan, set in the 2013 Palarong Pambansa in Dumaguete.

Most noteworthy is that the mark also puts her at #10 in the All-Time Junior lists for the Philippines 800m.

While this cannot be counted as a Batang Pinoy Final as only marks ran in the Final are eligible.

Undoubtedly, Tara will have no problems going past the finals.

If anything, this reiterates that the PSC should reconsider the Batang Pinoy when we have performances like this.

Borlain is at St. Paul’s Pasig, so she represents NCR in the Palaro.

She took an 80m win from Charmaine De Ocampo and Aaliyah Ingram of Dasmarinas City, who clocked 2.26.01 and 2.28.08 for Silver and Bronze.

She was a stand-out in Triathlon, having won the Alaska Iron Kids in 2016.

This year she focussed more on athletics running at the PATAFA Weekly Relays representing DLSU. She clocked  2.18.10 on August 27.

She was constantly finishing second place to UST Jieann Calis, the Palaro Record Holder in the 800m Run.

She will again meet Calis in the Youth Girls Final next month,

Furthermore, Photos indicate a significant growth spurt for Tara, who shot up from 5’0 to 5’7 in the last 2 years.

Tara was helped a lot thanks to the support of Alaska Milk Philippines and its CEO Fred Uytengsu.

This article will be a roundup and finalization of all news concerning the 2017 Batang Pinoy Vigan.

And hence the last article, Pinoyathletics, will publish on Batang Pinoy Luzon Leg 2017 in Vigan.

Pinoyathletics.info is in firm agreement that Tara Borlain mark is the best athlete in these games. 2.15.49 being a National Age Grade Record for 14-year-olds cementing this.

And very capable of breaking the 2.19.56 record of Feiza Lenton in the finals.

While her sister Samantha will focus on swimming.

And other athletes in Archery and Swimming had 5 golds.

This report will solely focus on Athletics.

However, the third gold for Borlain.

Going for a Palaro record may require fewer events or even just running the 800 at the Palaro, which will also be held again at Vigan.

by a 15-year-old Filipino of all time.

This is below the 23.01 Batang Pinoy record set by his training partner Veruel Verdardero in the 2016 Batang Pinoy Finals last year.

Jabol has to clock this mark in the final; he also has 20 to have still been eligible for the Batang Pinoy, that’s if the PSC doesn’t cancel it.

The Overall Champion in all sports was Baguio City with 49 golds; they defeated last year.

Swimmer Samantha Therese Coronel was also going for her fifth gold in relay events. She earlier triumphed in the girl’s 15-under 50m butterfly, 100m and 200m, and 50m backstroke events. 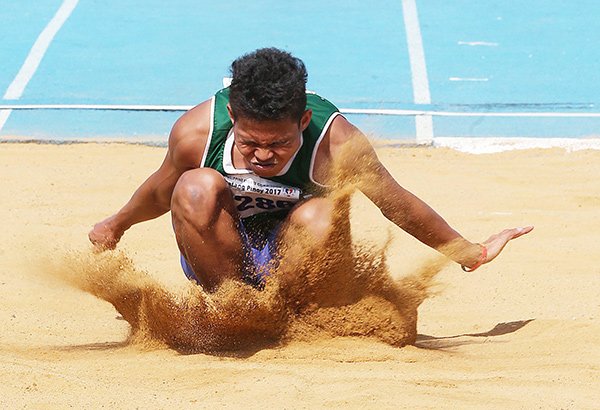 Oct 25, 2017, Vigan – The  Batang Pinoy Luzon Leg was held in Vigan, which will serve as a dress rehearsal for the Palarong Pambansa 2018 to be held next year.

Furthermore, Jabol won the Long Jump with his first jump of three attempts to make it to the top 8.

Then he went straight to the 100 dashes. Jabol is originally from Buhal, Can Marines Del Sur originally.

Jabol has already represented the Philippines; back in March, he took a silver medal in the SEA Youth Long Jump in Ilagan, and Isabella finished 4th. (given 6.99m, but this mark is invalid due to bad measuring and is 5.99m in Sea Youth Champs).

Jabol will be turning 15 in a few weeks, so his Age grade is compared to 15-year-olds.

“I fouled my last attempt because I was already feeling numbness and cramps in my legs,” said Jabol, the ninth of 10 children by carpenter father Dionisio and housewife mother Rosemarie, in Filipino.

Most noteworthy is that Jabol, a student at Emilio Aguinaldo HS in Cavite, is Palaro Champion 100-200-400 Champion Veruel Verdadero.

While two twins from Cavite, Charmaine and Charlaine Deocampo, both 14, also took to the track.

Furthermore, the pair was part of the Power House 4×400 of Cavite, which broke the Palarong Pambansa record last April in Antique.

While she won the gold compared to her twin Charmaine, Charlaine admitted the former is better than her.

“She’s better than me,” said Charlaine of Charmaine, who won three elementary golds in the 2015 Tagum Palaro compared to the former’s two.

Charmaine, however, perhaps with the wrong event choice, was 11th in the 3000m. Tara Borlain won this, a 14-year-old Grade 9 St. Pauls Pasig student.

That ran well for DLSU during the weekly relays. And was 8th in the 1500 and 3000 athletes last Palarong Pambansa.

While it was the first Batang Pinoy gold for Borlain, who started in triathlon where she and elder sister Sam had celebrity status as Alaska IronKids champions.

And could win more as she is scheduled to compete in four more events, including her pet 800m and 1500m.

“As always, I expect to give my best in my events and I have to make sure of the time and not the positioning and today I got a personal best,” said Borlain, who was accompanied by former celebrity bodybuilding champion Ringo who is her father, trainer, and coach all rolled into one.

While hours later, Tara went to the nearby pool area where she cheered for Sam.

**It Seems the PSC has changed the format of Batang Pinoy back to 15 years and under after allowing a 16-18 age category last year in the Finals.

and can find full Results here 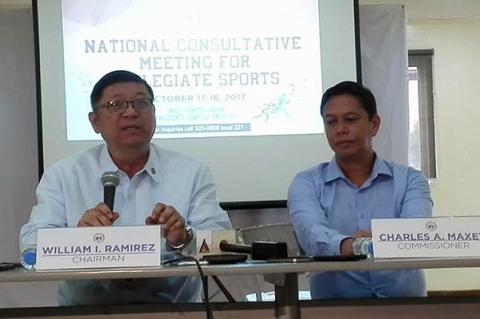 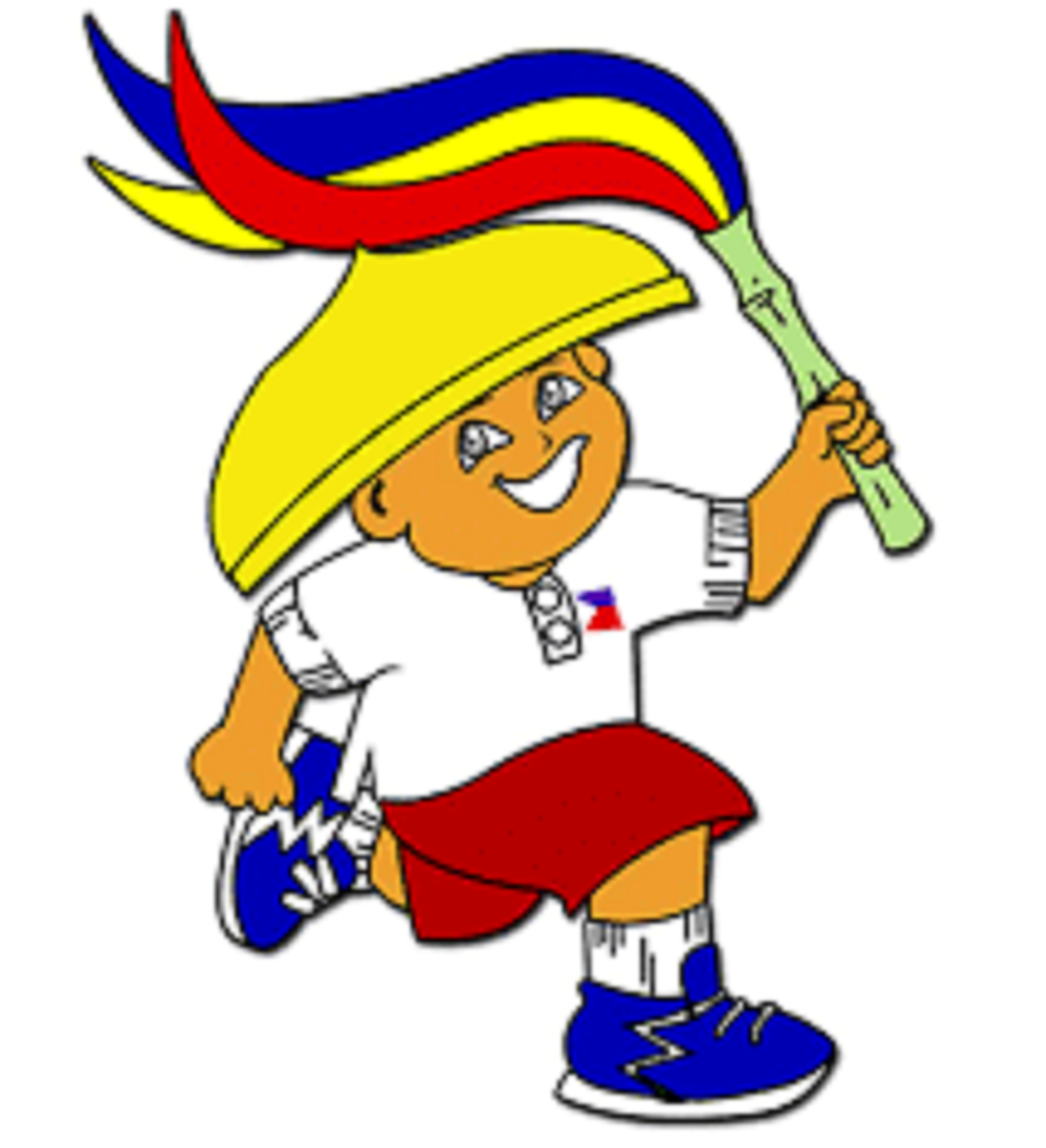 PSC Plans to Scrap Batang Pinoy Next Year. Is this Good for the Country?

While It came to my attention a few weeks after a tip-off that the PSC was planning to scrap the Batang Pinoy.

So I found this hard to believe but was advised not to post anything until information became available after October 3.

In conclusion, and provided no further information.

After 10 days, it is now safe to post, while this grace period seems a bit too long in the future.

Similarly, I read in Balita that the plans to Scrap Batang Pinoy next year will push through.

My sources told me weeks ago a meeting was held between PSC and DepEd.

After that, and will divert the fund for BP to coaches’ technical training and education.

However, the PSC also feels that BP is just a duplication of Palaro. Hence nothing is cast in stone, but this could be the last staging of the BP.

Now it seems like it will be based on the recent quote from Balita.

In my own opinion, I do not think the Batang Pinoy is similar or intended to be too similar to the Palarong Pambansa. Of course, I’m not saying the Batang Pinoy instead of Palaro. But both are equally beneficial.

I could go on all day about the benefits and opportunities this program brings to Philippine sports. I have frequently been invited as a Researcher and Analyst for this said event during my stint with the Philippine Sports PSC (Philippine Sports). In this sense, it engages learning and knowledge sharing in a more sports carnival-like atmosphere.

Better to get Rid of Milo

What doesn’t make any sense is removing an event such as Batang Pinoy, which has high attendance and more room for growth.

Palaro has a lot of attendance also. However, we do have 3 multi-events targeted at kids. Palaro, Batang Pinoy, and Milo.

And if you include the Children’s Games, there are now 4.

The event that is the weakest link here is the Milo Little Olympics.

Which is now nothing more than a glorified exhibition/ barangay game. Numbers are dwindling.

In Mindanao, Cagayan De Oro always hosts this event despite providing a substandard track oval with no rubber surface.

Despite there being an 8-lane standard rubberized track oval at Xavier University 10 minutes away.

The organizer hasn’t taken the initiative to use the better facility.

Due to the Marawi incident, Milo made many teams clear of the Milo event and saw numbers plummet.

Suppose Milo is to survive in Mindanao and must give other cities the opportunities to host. It’s not fair that Cagayan De Oro always hosts the event when other places are willing to.

More make of the Philippine Sports Commission (PSC) the Palarong Pambansa in the agency’s power the pagorganisa and conduct a regional elimination for the student athletes’ annual tournaments.

After the united states commission on Bayani education (ched) and the department of education (DepEd), which nagkaklaro in the power of PSC TO ADMINISTER THE COLLEGIATE Sports, also the participation of the student-athletes in the international competition, said by PSC CHAIRMAN WILLIAM ‘Butch’ Ramirez which more agency the program at the grassroots level.

“It’s timely. Right now, we’re planning to scrap the Batang Pinoy next year and focus on the Palarong Pambansa.Institutions that are the games, it is set up its organization, so it’s easier for us to strengthen it with the aspects of technical, started and training,” said Ramirez.

As Introduction said Ramirez, the national consultative meeting for Collegiate Sports on October 17-18 to philsports Multi-Purpose Arena in Pasig City.

Meeting the expected lalahukan of 140 Representatives of universities, colleges, schools, and the school leagues, raising the quality of the Competition at the school level.

“Remember that no less than the President has instructed us to make sports accessible to all, to involve the youth more,” pahayagt ni Ramirez.

Ramirez asserts that Elite Sports’ stability is mapagtatagumpayan if the training is at the grassroots level.

“University sports has always played a big role in elite sports. It has been a rich ground of sports talent and we want to continue to support them,” aniya.

Scheduled to perform the palarong palarong next year in Ilocos Sur. The Province will also stand as a host for the PSC-sponsored Batang Pinoy next week.

Would you mind checking out other 2017 PSC News?