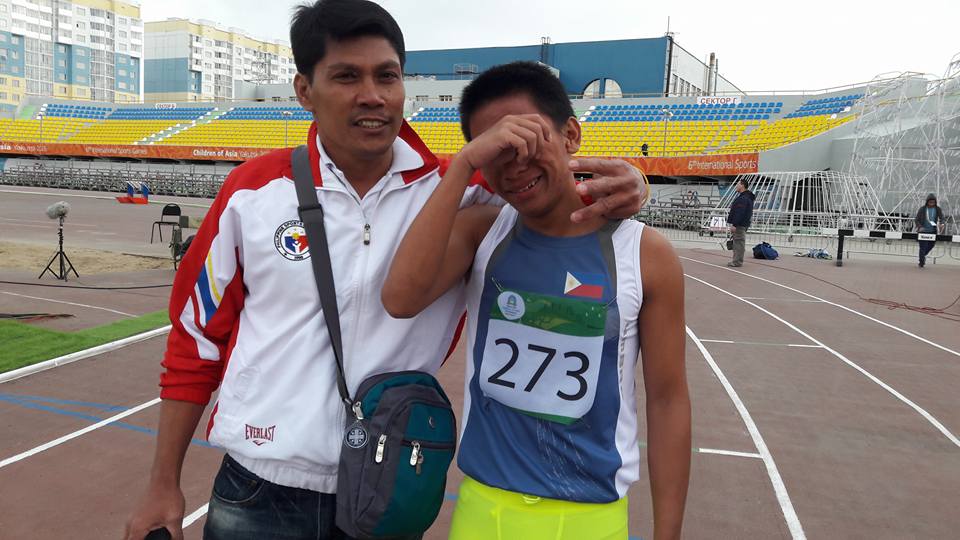 Mark Harry Diones added another bronze medal to go with Veteran Marestella Torres bronze in the long jump. Diones a Criminology graduate from JRU who is trained by legendary coach Noel George (Jojo) Posadas leaped 15.72m to secure the Bronze. His best jump is 16.11m and he was fourth at last years SEA Games. He finished behind Nguyen Van Hung of Vietnam the 2013 SEA Games Champion (16.63m) and Pratchaya Tepparak of Thailand (15.81m).

The Asian Beach Games continued for the Philippines campaign.

The Philippines quartet of Anfernee Lopena, Isidro Del Prado Jr., Jomar Udtohan and Mark Harry Diones clocked a time of 30.93 which got fourth and a well-beaten last place. Behind Thailand 26.19, Oman 26.58, Vietnam 26.93. China was disqualified.

The Overall Placing of the men’s cross country team was as follows for team events.

After consultation as these results are very doubtful or not accredited by IAAF only Olympic Council of Asia. They cannot be considered for national records, rankings, and selection purposes. 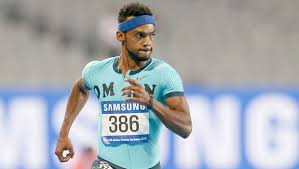 Not to take anything away from the amazing performance of 27-year-old Barakat Al Harthi of Oman. But the question is. For statisticians.

Is this 60m Time at Asian Beach Games legit?

The winning time at World Indoors is 6.47 by Trayvon Brommell.

1. Is it electronic timing?
2. Was it on dirt or rubberized oval?
3. Was it possibly wind-aided as its outdoors?
4. Was the distance of the 60m verified and approved by IAAF or the necessary 3rd party?
5. Is the meet sanctioned by IAAF or just by the Olympic Council of Asia

So do we have a new star/beast/freak emerging? or was one of the above factors playing in favor which cant make this a legit performance?

Well, I wish this guy all the best legit or not for this time he clearly has a big future ahead of him in the world of sprints. Three times Olympian Marestella Sunang took the bronze medal for the Philippines on the second day of the Asian Beach Games in Vietnam. Sunang who holds the SEA Record in the Long Jump at 6.72m, launched an out of season 6.10m. She finished behind Bu Thi Thu Thao (6.32m) the SEA Silver medalist in 2015, and Nguyen Thi Truc Mai (6.11m) both from Vietnam.

The Long Jump had a dirt runway, not a rubberized runway making strong performances more difficult.

Relay Teams in Men’s 60m x 4 and a five man 6km each cross country relay are awaited in the 3rd and 4th day of competition.

The Philippines sent the following Athletes in Athletics to the Asian Beach Games.

The Following athletes will represent the Philippines in Athletics

For the Cross Country, it has 5 team members and each will run 6km, the total distance is 30km. Its good to see Cross Country ran which is not promoted enough in the Philippines as it should be. Road Running seems more popular. 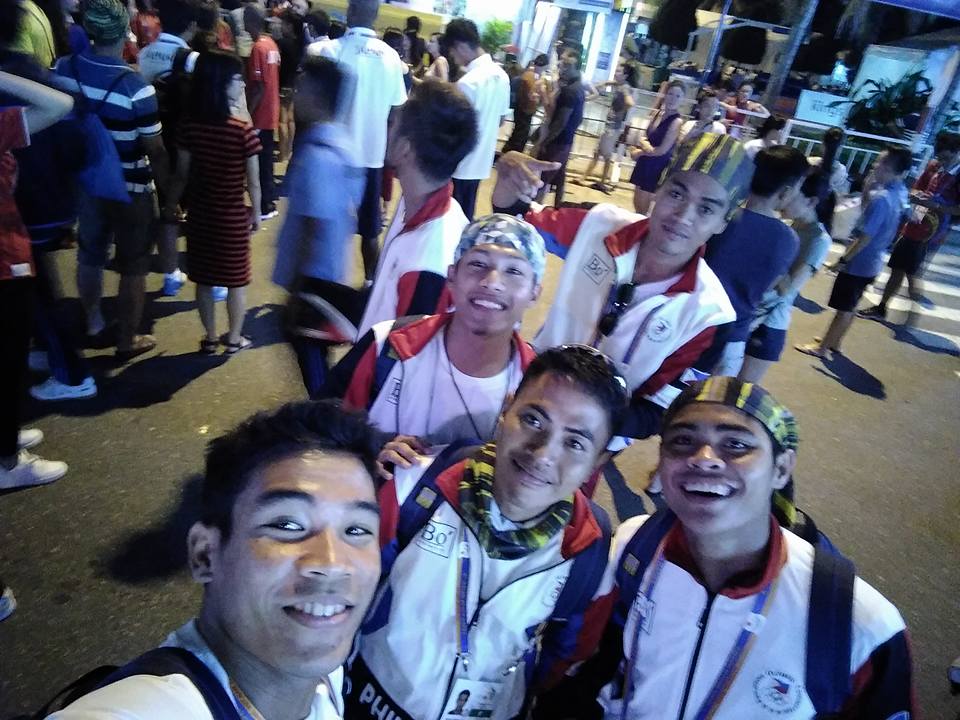 Organized by the Olympic Council of Asia it is held this year in Da Nang Vietnam. There will be 172 events in 22 sports.

There are 14 events in Beach Athletics. 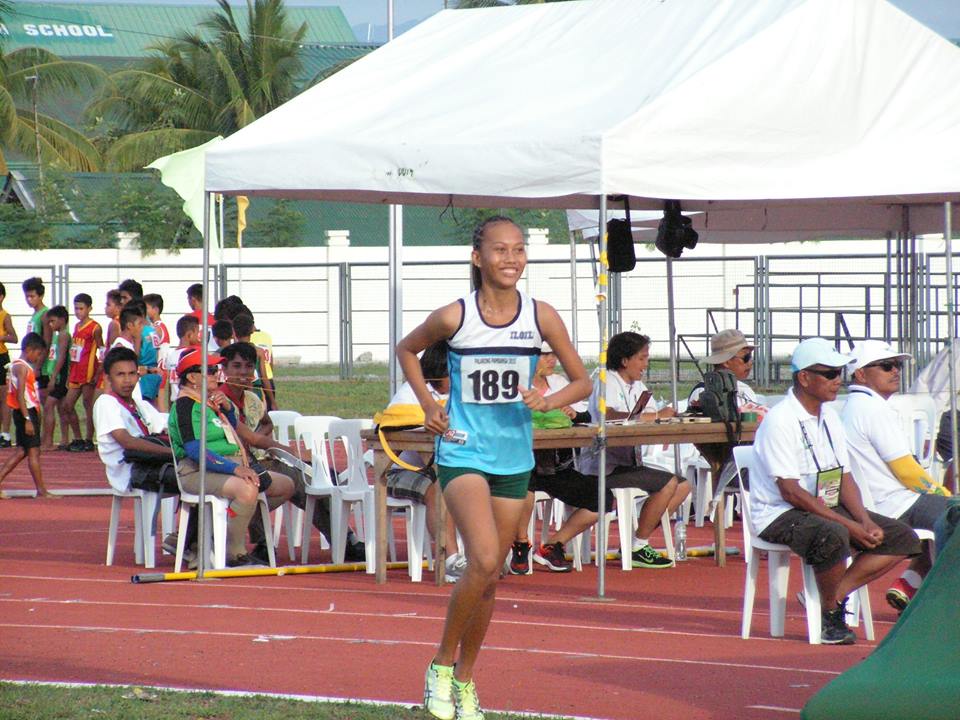 Kaylene Mosqueda who originated from Iloilo, but is now studying at FEU claimed sole ownership of the National Junior Record, erasing the names of the three joint record holders in this event.

The previous records of 1.66m were held by Two former FEU Girls Aprilen Laudencia set in 2012, and Anjelica Janda set in 2014. Also sharing the old record was Cherry Mae Banato the palaro record holder and current champion set at the 2016 Palaro.

The Performance places Mosqueda 6th on the Philippines All-Time list for Women’s High Jump. The National Record is held by Narcisca Atienza at 1.81m. 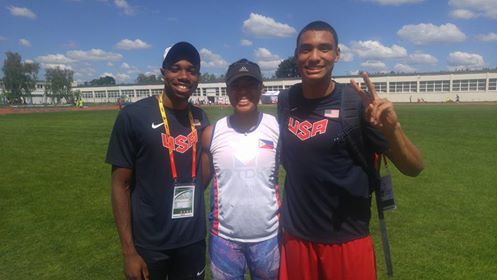 The Philippines was represented by Fil-Heritage athletes. Zion Corrales-Nelson and Kayla Anise Richardson 17 and 18 in the 100 and 200-meter dash in Bydogscw, Poland at the Bi-Annual World Junior Championships. It was the second world juniors for the duo who two years ago in Columbia competed in the 200 & 400 and 100 & 200 respectively.

Zion Corrales-Nelson, better known as the national 400 Record Holder, finished 24th of 46 entries and failed to progress in the Women’s 100m with a time of 11.80 (0.2), just outside her personal best. She needed to run 11.78 to qualify through.

Ewa Swoboda of Poland had the fastest qualifying time of 11.10. World youth champion

Candace Hill of the USA qualified third in 11.43.

The two girls will seek action in the 200 meters in a few days.

Athletes who meet the IAAF Standards for World Juniors as of 19.06.14

3) Qualifying Standards are outlined by the IAAF if you don’t hit the standards according to the guidelines of the IAAF you don’t won’t be sent we/have and will have qualifiers so we are not taking athletes (wild cards) who do not hit these standards. (standards provided for by the IAAF).

or 1998) may compete. The maximum number of events in which a Youth athlete

If the two individual events are Track Events, only one of these may be longer than

the exception of the Relays).

Entry Standard, but only two will be allowed to compete.

enter in any Championships event, may enter one unqualified male athlete OR one

athlete excels in a Field Event, may submit to the IAAF, by the time of the

Preliminary Entry deadline, the name of their athlete plus performance they would

like to enter in the Field Event. The Technical Delegates will make the final decision

and, to do so, may seek the opinion of the relevant Area Association.

qualified in an event, it may enter one athlete in these events regardless of any

of six athletes. Any four athletes among those entered for the competition, whether

for the relay or for any other event, may then be used in the composition of the

team for the first round.

CONDITIONS FOR VALIDITY OF PERFORMANCES

by the IAAF, its Area Associations, or its Member Federations. Thus, results

country in which the competition was organized.

(see Rule 147) will only be accepted under the following circumstances:

stadium the results will be:

§ Accepted only with the Area Association’s approval if achieved at

§ Never accepted if achieved at competitions conducted under IAAF

tracks will not be accepted. 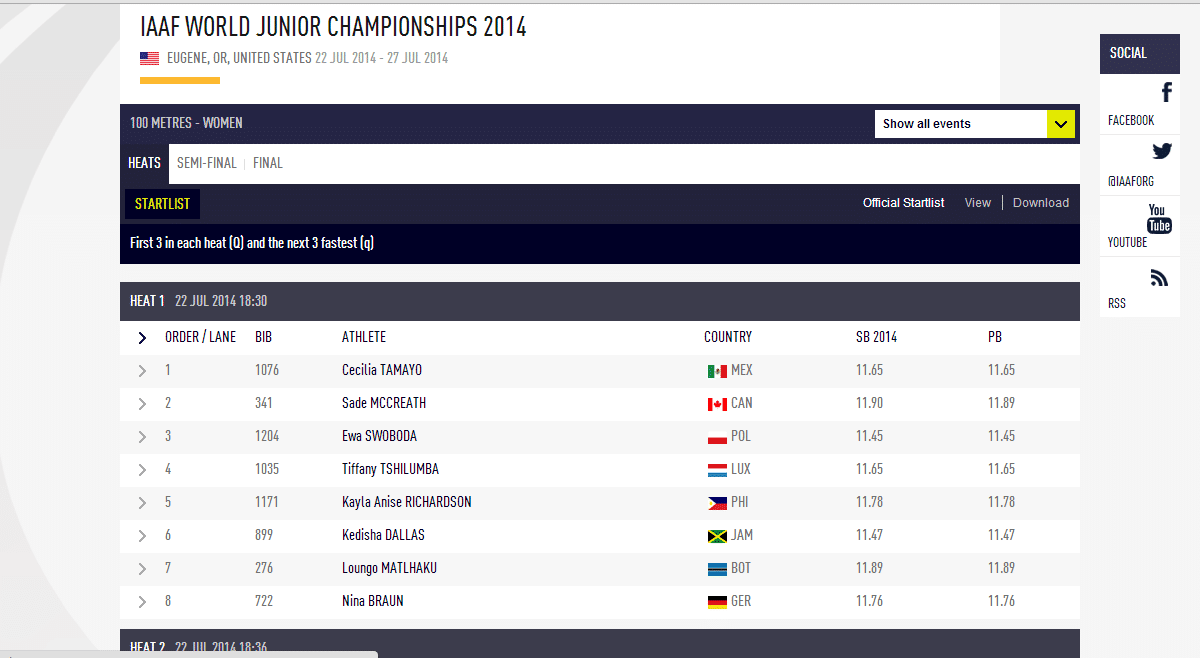 Filipina #2 100m Sprinter Fil-Heritage Kayla Richardson has drawn lane five in the first heat of the Women’s 100m at the World Junior Championships in Oregon. Kayla who has a personal best of 11.78 will face some quite stiff competition as she is the sixth-fastest of the eight in the heats. 17-year-old Ewa Sowoba of Poland who ran 11.46 and Jamaican Kedisha Dallas are the best two in the heats.

The Top three fastest in each heat and the next three fastest times advance there are 7 heats meaning 24 will make it through to the Semi-Finals.

Kayla who has been accompanied to World Juniors by her father Jeffrey Richardson, at 16 is young enough for the next World Juniors in 2016 may be able to achieve the realistic goal of breaking the National Junior Recordset by Princess Joy Griffey at 11.75, set at the 2004 US Junior Olympics. The valuable experience gained from competing at this high level will definitely prepare her well for the World Juniors in two years’ time and also more immediately at next year’s SEA Games.

It’s important to note that Kayla is at somewhat of an advantage due to less traveling time compared to most athletes in the event so it could actually place better than sixth.

This is Kayla’s second time represented the Philippines having finished fifth in the finals at the Asian Youth Champs.

Kayla and Zion at World Juniors

The World Junior Championships is now over for Kayla Richardson and Zion Corrales-Nelson the two athletes were the first-ever athletes to qualify by meeting the IAAF standards for the World Junior athletes for the Philippine Islands. In the past, the Philippines had relied solely on wild card entries and only sent one athlete.At 16 years of age, the US-born Richardson and Canadian born Zion were the youngest competitors in the even with girls born in 1995-1998 participating. Although they were not able to pass the first round in this meet the international experience will prove useful to them in future international meets.

Kayla had run for the Philippines already at the Asian Youth Games in Nanjing and Zion at the Asian leg of the Youth Olympics in Thailand. Kayla finished 5th in the 100m at that meet, while Zion got Bronze in the 200 and the 400. Zion performances allowed her to achieve qualification for her next meet the World Olympic Youth Games in Nanjing China next month in August. Zion was rewarded the next month at the British Columbia Championships were she clocked 54.18 to break not just the Junior but Senior National Record and at 15 became the countries youngest current record holder of an open age record.

With other Fil-Heritage girls emerging and lower standards for this meet, it may be possible for the Philippines to send a big team as part of its development program.

The SEA Games June 5-15 also beckons. With Kayla already hitting the silver standards in the 100 and bronze in 200 and Zion needing to clock 53.73 to get into the 400. They would be joined by 27-year-old US-based sprinter Princess Joy Griffey who has qualified with silver standards for both the 100 and 200. The trio would then join with one other runner who is yet to be decided to form a formidable 4x100m relay team.

Kayla Richardson finished fifth in her heat at the World Junior Championships. Unfortunately, she was not able to qualify for the Semi-Finals of 24 as the top 3 and the next 3 fastest times qualified through to the next round. The slowest qualifying time to the Semi-finals was 11.93.

Kayla finished 39th overall at the World Juniors. Although off her best of 11.78. The valuable experience Kayla will gain from this meet will prove useful for the 2015 SEA Games where she has met the Silver Mark of 11.85 and the World Youth Champs next year in Lille France. The World Juniors was for athletes 1995 to 1998, whereas World Youth is 1998 and 1999.

Meanwhile, Fil-Canadian 15-year-old Zion Corrales-Nelson was disqualified from her race for stepping out of her lane: (DQR163.3(a) IAAF rules. Zion’s best time of 54.18 would have easily qualified her for the Semi-Finals. She needs a time of 53.73 to qualify for the 2015 SEA Games. 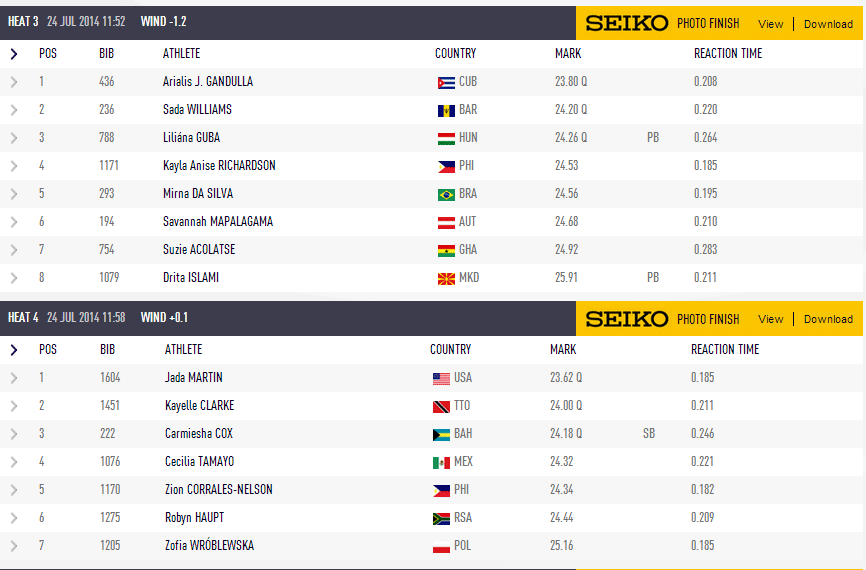